Advertisement feature in association with Southern

When I put ‘complete all three crazy golf courses in Hastings, the spiritual home of crazy golf’ on my list of 50 things to do before I’m 50, I didn’t realise I was carrying on a family tradition. Little did I know that my mother and grandparents before me had, in the mid 1960s, stood on the slopes of East Hill in Hastings, playing the 9 hole, council run, pitch and putt. 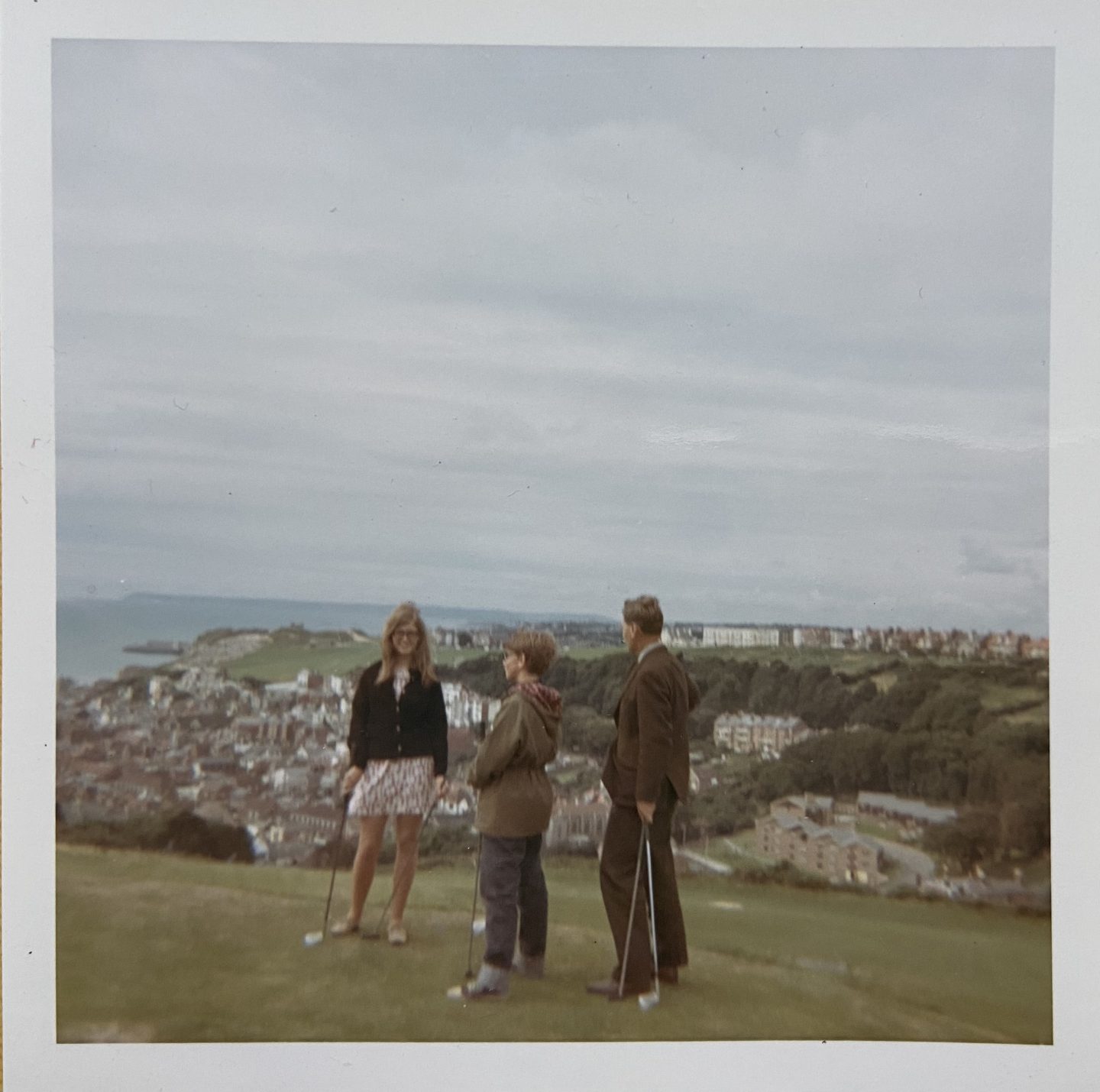 That’s my mum on the left, my uncle Pete in the middle, and my Grandad on the right. My Grandad was rarely seen without a suit and tie, although we did find some other Hastings pitch and putt photos where he appears with his short sleeves rolled up! The scandal.

The pitch and putt closed in the 1980s, but Hastings hasn’t lost its love of mini golf. In fact, Hastings now plays host to the World Crazy Golf Championships, which I’m sure is something a lot of you had never even imagined existed. Hastings Adventure Golf, which you can see in the picture below, taken from the cliffs above, has three courses – ‘Adventure’, ‘Crazy’ and ‘Pirate’ – and last week we took a Southern train along the south coast to Hastings and did ALL THREE. 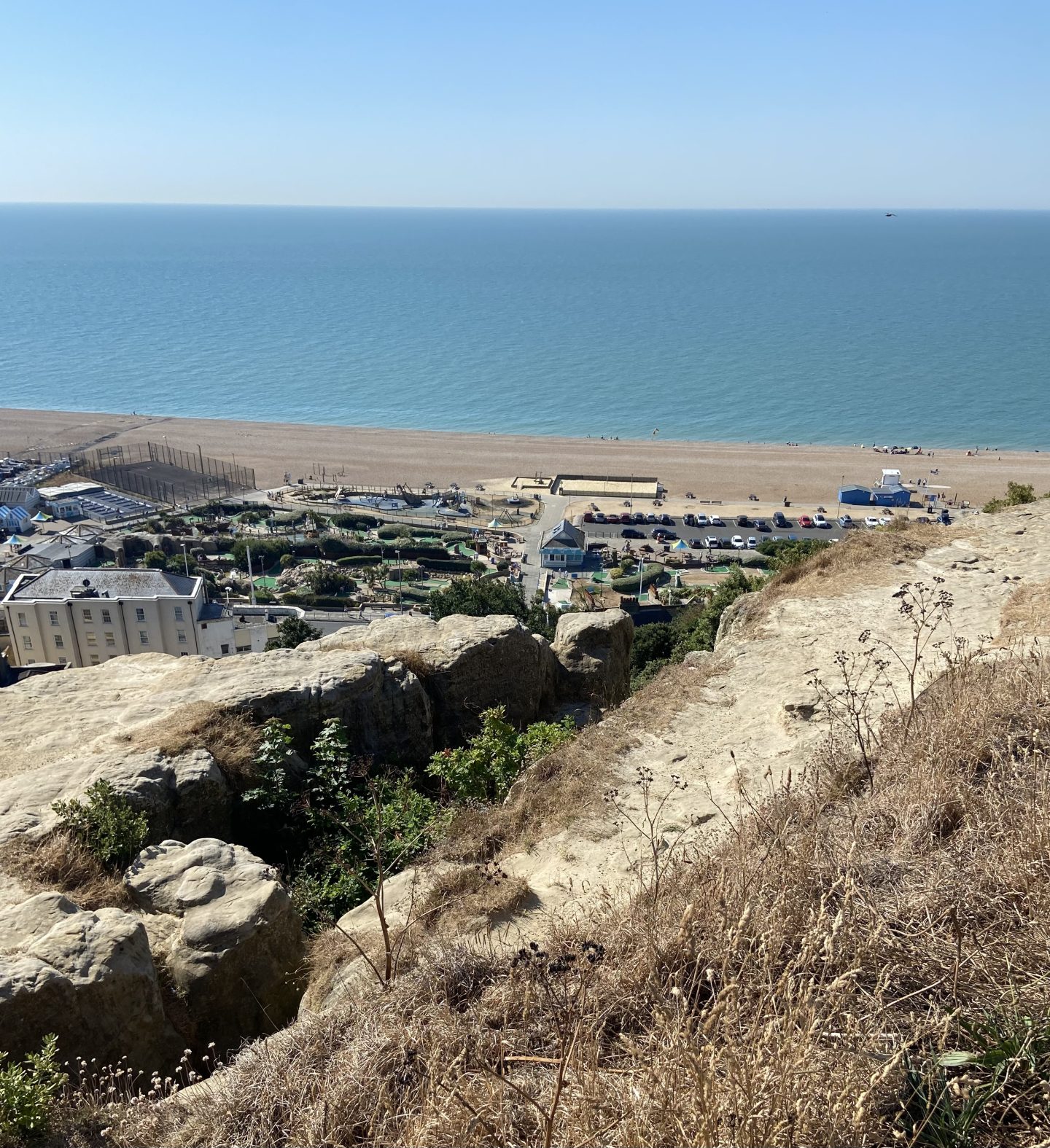 Now you might be thinking ‘THREE courses of crazy golf is a lot of crazy golf Jo, are you sure you’re not the crazy one?’ and you would be right, it IS a lot. In fact, by the time we finished it was dark, and I was feeling a little bit like I might never want to see a golf ball again, but that’s the whole point isn’t it? Life is fairly meaningless at the best of times, so if you’ve challenged yourself to complete three crazy golf courses back to back then damn it, you’re going to complete them, even if it is past your bedtime. (We were visiting mid heat wave and were very pleased that the golf was open until 10pm so we could go in the evening when it was a bit cooler.)

Seriously though, we had a lot of fun, and there was a WINDMILL and everything. You know your crazy golf course is properly crazy when there’s a windmill. 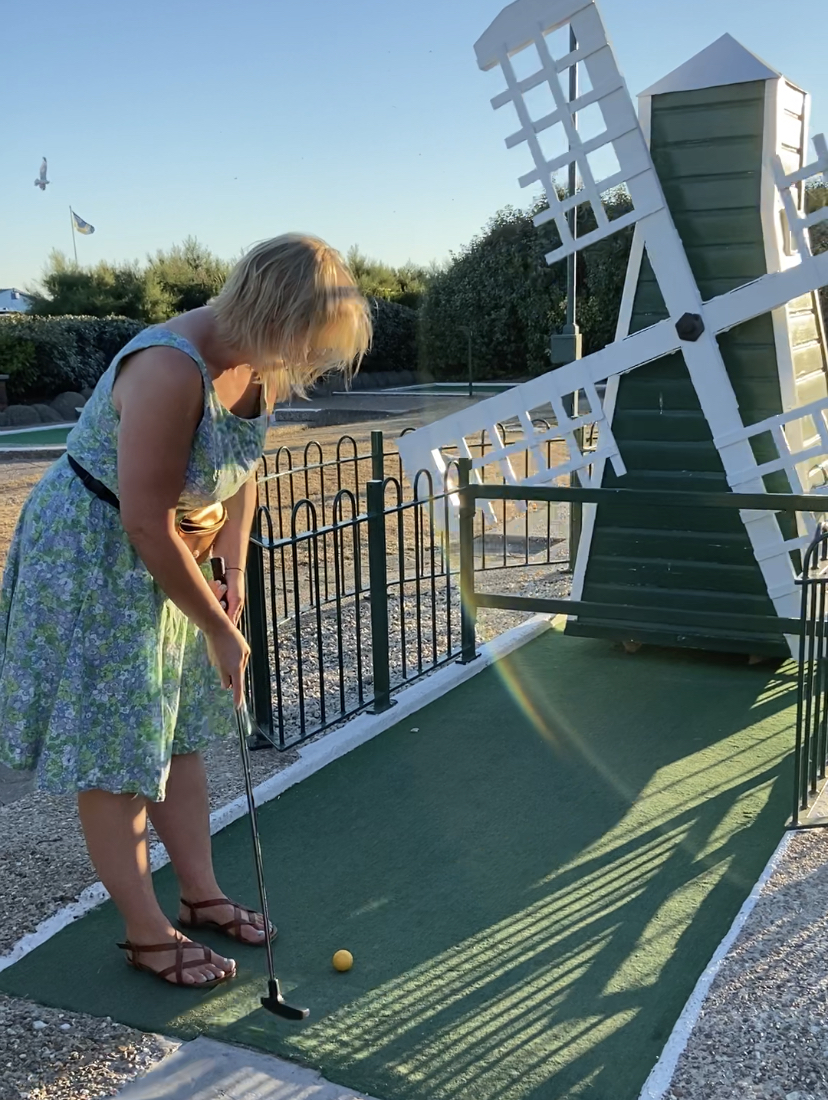 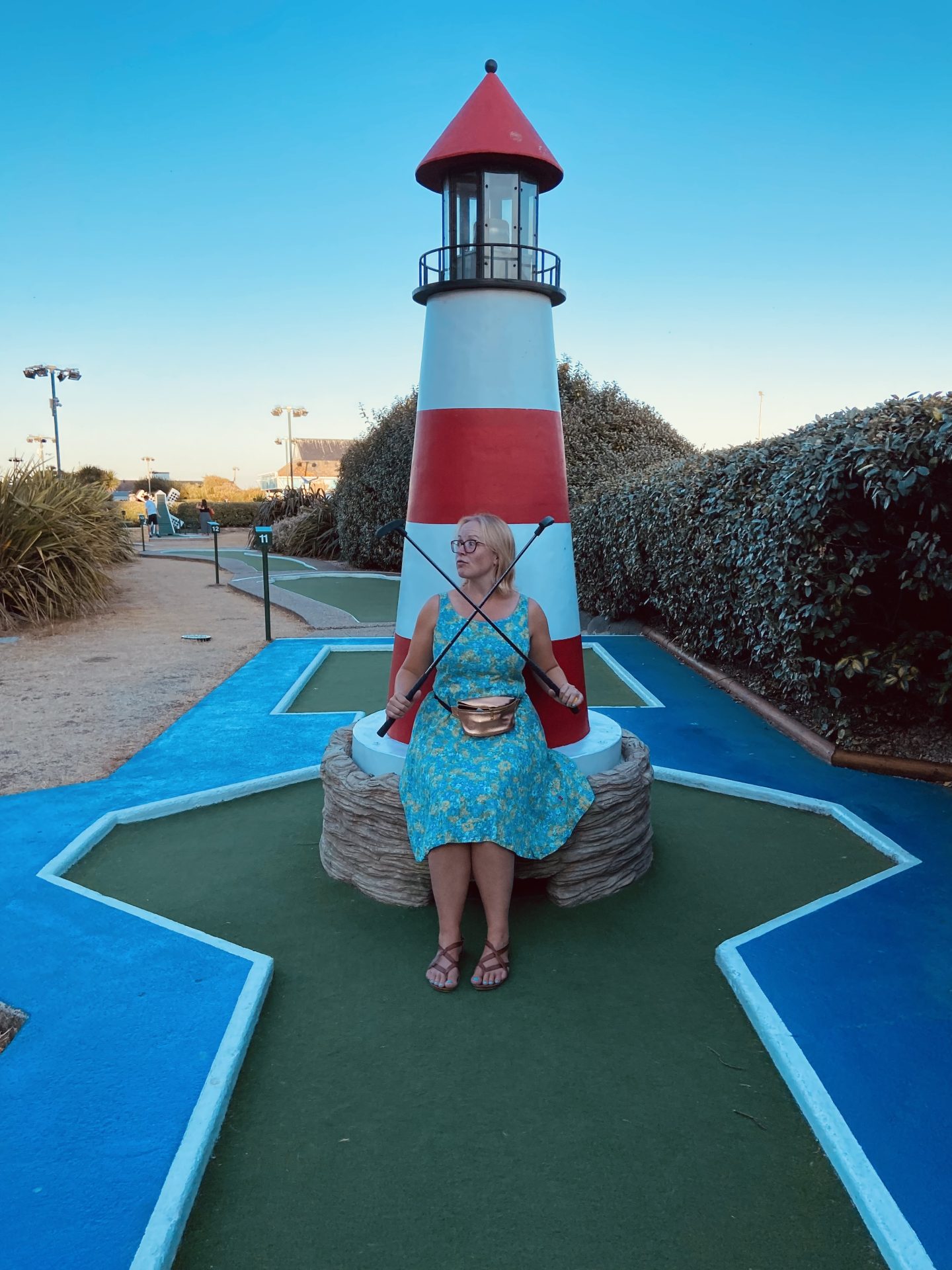 All aboard the train to Hastings

I’ve had the crazy golf on my list for a while, but had always been put off by the drive to Hastings – I get bored driving a long way, and I find it very tiring, especially in the hot weather. For this trip then we decided to mix it up a bit and caught a Southern train all along the south coast from Southampton to Hastings. I really love trains. I often get the train for longer journeys and I took a lot of trains when I was on tour earlier in the year. I always take a stack of books and magazines, imagining that I will catch up on reading, but every single time I just end up gazing out of the window at the passing scenery, following rivers and canals and nosing into people’s back gardens, imagining how my life might be different if only I lived on a barge or had a garden with a summer house.

I’m always the one that drives when we’re in the car and a train gives me the chance to be a passenger for a change. Also you get to eat snacks – everyone knows that a train picnic is one of the best bits. 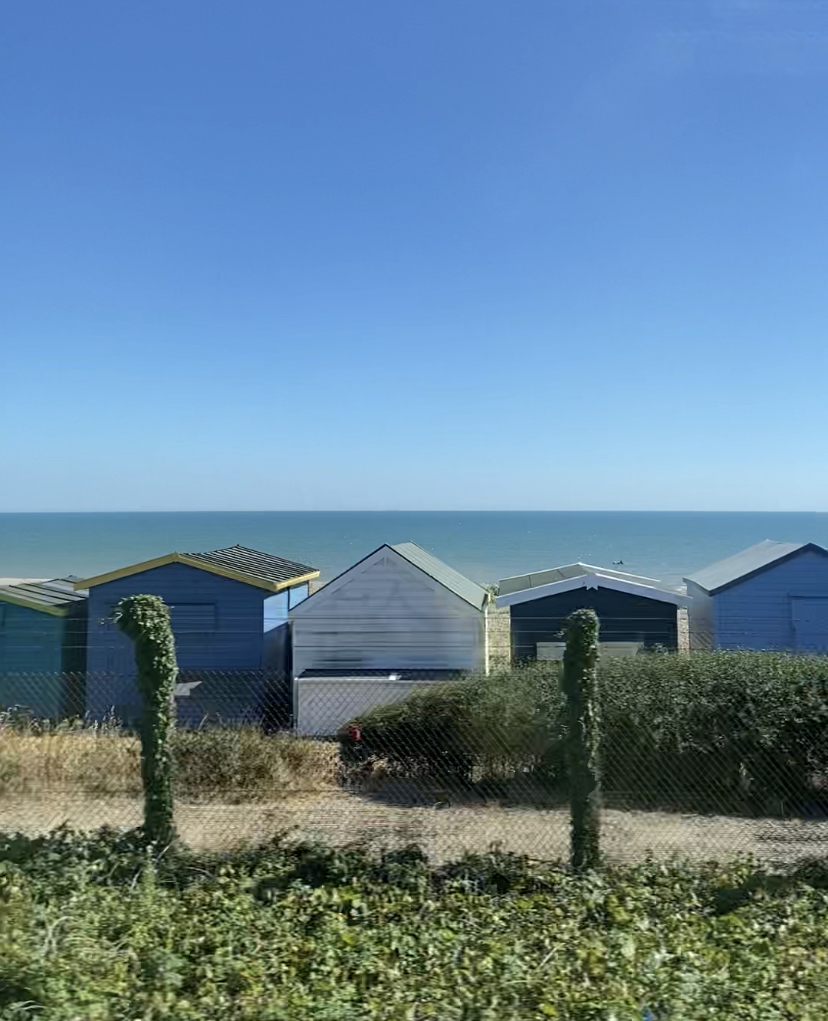 The view from our train to Hastings

Being used to the extortionate Taunton to London train prices imposed by a different rail company who shall remain nameless, I couldn’t believe how reasonable it was to get the train all the way to Hastings, and that was without even factoring in any Southern special offers.

You can get advance fares on Southern mainline routes from as little as £5 and for any families travelling with kids it’s worth timing your journeys so you can get the £2 kids tickets. All kids aged 5-15 can travel for £2 when travelling with an adult, up to four children per fare paying adult, on all off peak and super off peak times on most journeys – find out more here. 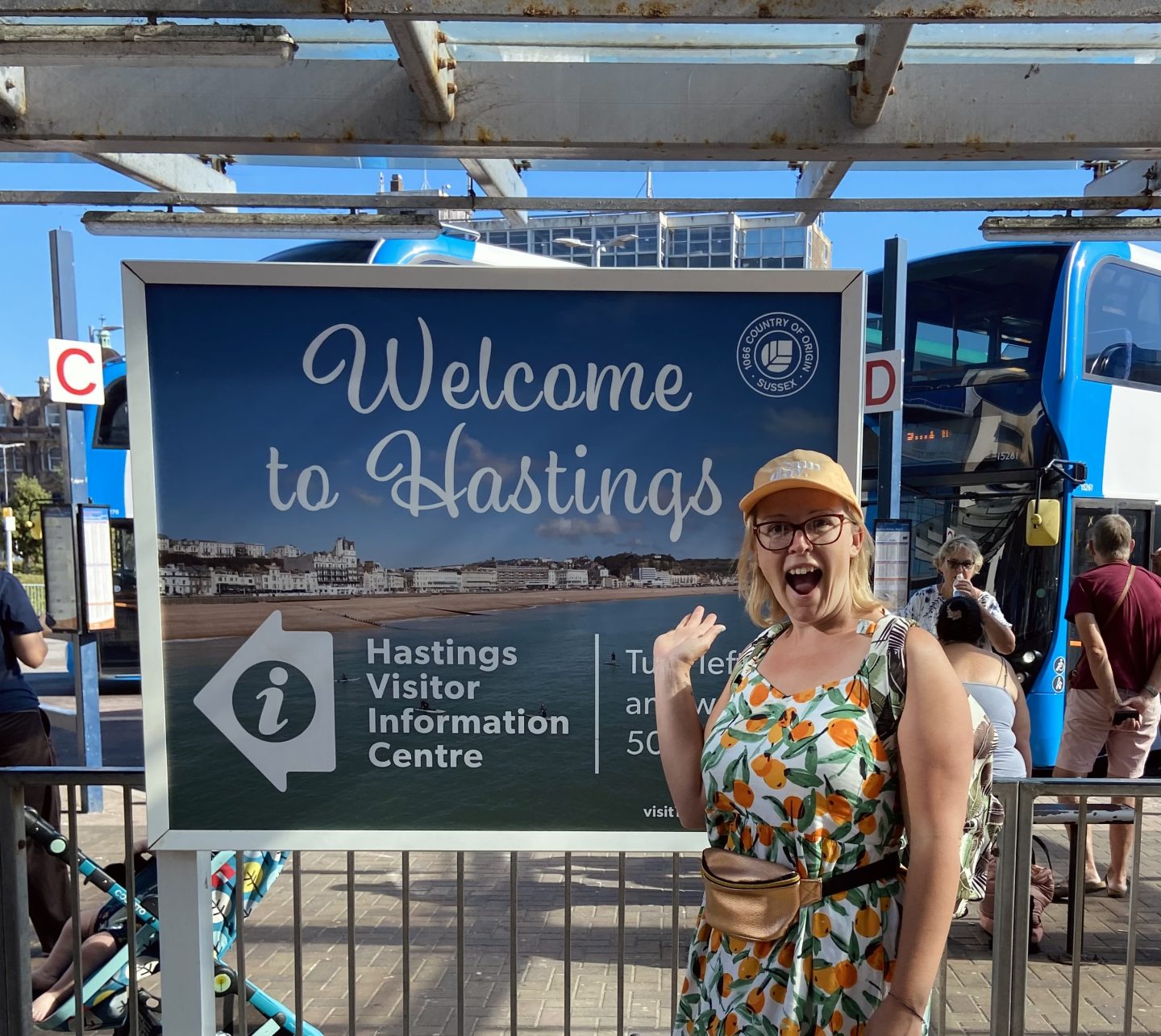 Hastings beach and the net shops

So apart from the crazy golf, what did we get up to on our short train trip to Hastings? Quite a lot actually. Although we were only there for an overnight stay, we packed a lot in. We went to the amusements of course – no trip to the seaside is complete without trying to win a cuddly toy on the grab machines – but we also enjoyed wandering around the old town, looking at all the beautiful buildings and independent shops.

I particular enjoyed getting up early and going for an explore as the sun was rising. I had the whole beach to myself, apart from the gulls, and it was just beautiful. 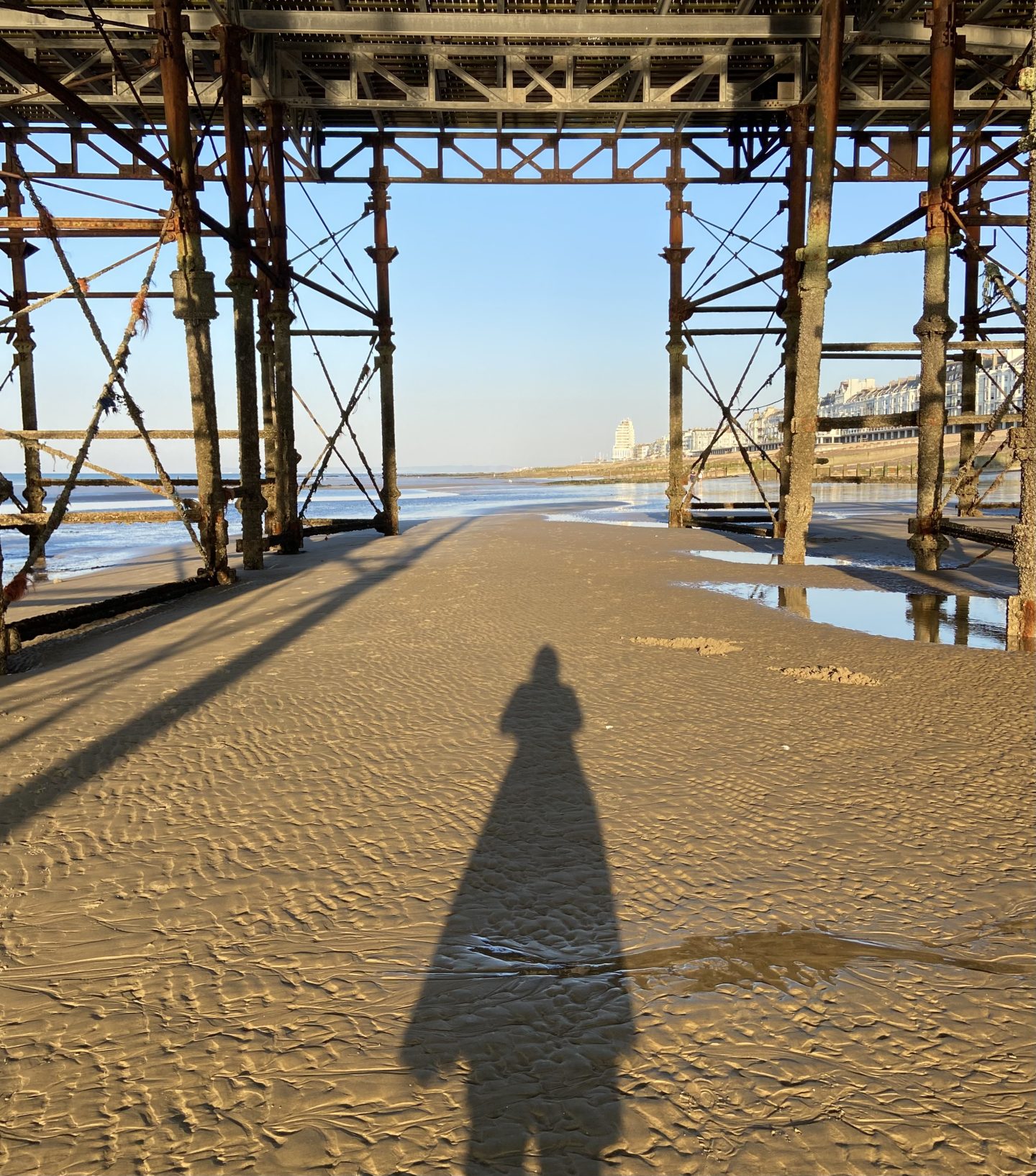 I walked down as far as the pier in one direction and then back up to the Stade – the historic fishing end of the town – to see the old net sheds. These sheds are unique to Hastings, and have been used for many years to store fishing nets. I was particularly excited to see these as I have a painting of them at home – a pen and ink picture – which I did myself as a teenager. It was copied from a picture so it was very special to see the sheds in real life, having had the picture of them for 30 years.

It was a lovely time of the day to walk around, before it got too busy and too hot. I saw an actual fisherman coming out of this cottage early in the morning. 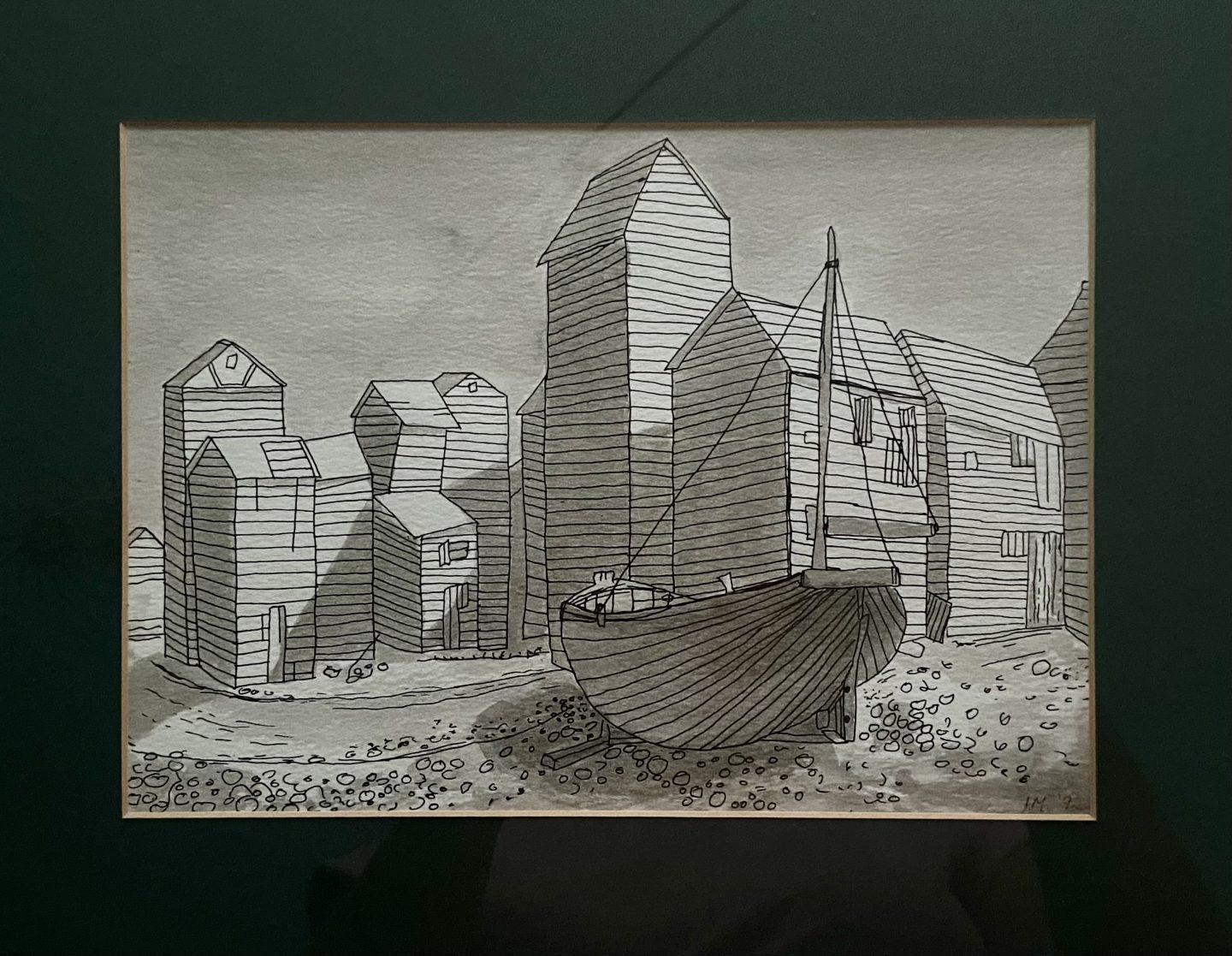 I headed back to our hotel at around 8am, (we stayed at Moore House and it was beautiful, with a fantastic location in the middle of the old town), and woke Belle up with a giant chocolate twist which I’d bought from Judges Bakery, just a few doors away. Honestly, it was the biggest chocolate twist I have ever seen – well worth a visit if you’re feeling peckish.

Because I clearly can’t get enough of trains, we stopped off on our way back to the station after breakfast for a ride on the Hastings funicular railway, the steepest funicular railway in the UK. There are actually two of them – the East Hill lift, just opposite the net sheds, and the West Hill lift, which is tucked away on George Street in the old town. We rode the West Hill lift, which goes up to the castle. The East Hill lift takes you up to Hastings Country park and is arguably the prettiest of the two. 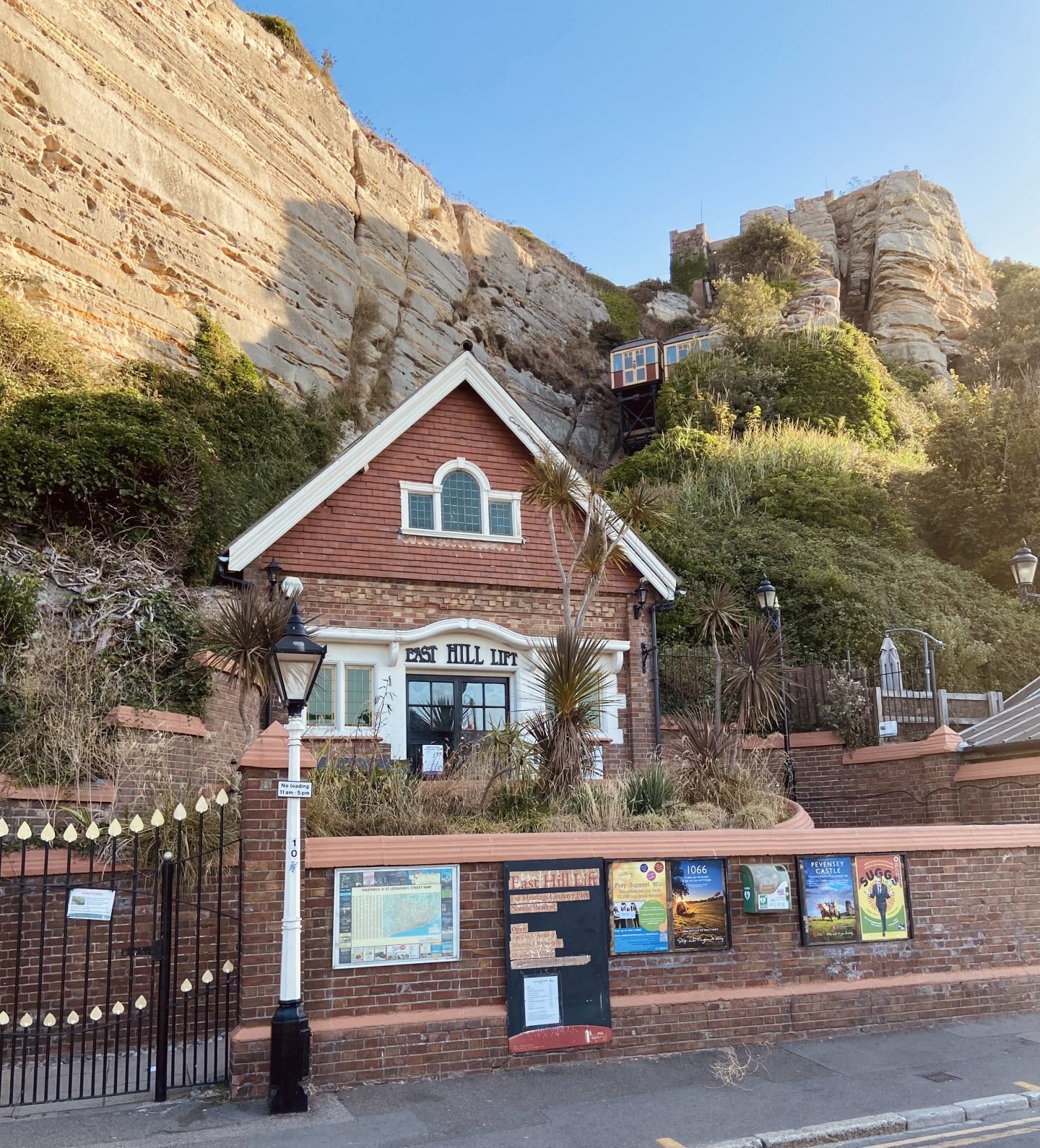 Discounts on family attractions with Southern

Back on solid ground and we headed back to the train station. It was only late morning but it was already boiling hot and after foraging in M&S for our return train picnic we were delighted to step onto the beautifully air conditioned Southern train and settle in for our return trip. Despite it being the summer holidays, none of the trains on our journey, (which had one change between Southampton and Hastings at Brighton), were busy, and we had a table to ourselves the whole time. It really was a delight compared to driving.

Did you know though that there are extra perks to getting the train with Southern? Not only do you get the pleasure of traffic jam free train travel, with the freedom to entertain children with games and snacks and fun facts about funicular railways, but you can also get 2FOR1 offers on lots of family attractions.

All manner of attractions across the Southern network offer the 2FOR1 deal when you book in advance with your train ticket, so you could really save a lot of money if you have a family trip planned. Current offers include places like Madame Tussauds, the London Eye, KidZania, Kew Gardens, Bletchley Park and even the world’s longest, fastest and tallest tunnel slide, which we have ridden!

Before your next family day out or mini break, check out the Southern 2FOR1 offers and see how much you could save by going by train.

Ours was only a flying visit to Hastings but I enjoyed it so much that I will definitely go back if I have the chance. I would love to explore the museums and galleries in Hastings, especially the shipwreck museum and Hastings Contemporary, (Jerwood Gallery as was), and I’d love to have more time to potter around the old town and hang out in some of the cafes and restaurants.

Until our next train trip to Hastings then, thank you so much to Southern for our lovely family mini break and for helping me complete my crazy golf challenge!

Plan your next day out with Southern now.