When Belle was small it was relatively simple to come up with things she would enjoy doing. They weren’t always things that I wanted to do, but soft play isn’t THAT bad if you take a book and pretend you can’t hear any of the shouts of ‘Mummy! Watch me on the slide! Watch me! Mummy!’

(They give up after a bit if you don’t respond.)

Nowadays though it’s trickier to come up with something that isn’t met with a groan or an eye roll, unless it’s ‘shall we go to Bristol and buy you bubble tea and spend ludicrous amounts of money in a ‘vintage’ store on stuff that looks like something Gran threw away in 1983?’

We were keen to visit though to ride the slide at ArcelorMittal Orbit.

I say ‘slide’ casually, like it could be one of those old metal ones that always used to terrify me in parks when Bee was a toddler. You know the ones? They were really tall and normally in the 90s they just had concrete around the bottom.

It is NOT that, although it is no less terrifying.

ArcelorMittal Orbit is actually the largest sculpture in the U.K. which I did not know. It was designed by Sir Anish Kapoor and has two viewing platforms with amazing views our over London. It is also home to the world’s longest, fastest and tallest tunnel slide.

Let’s get an idea of the scale shall we? 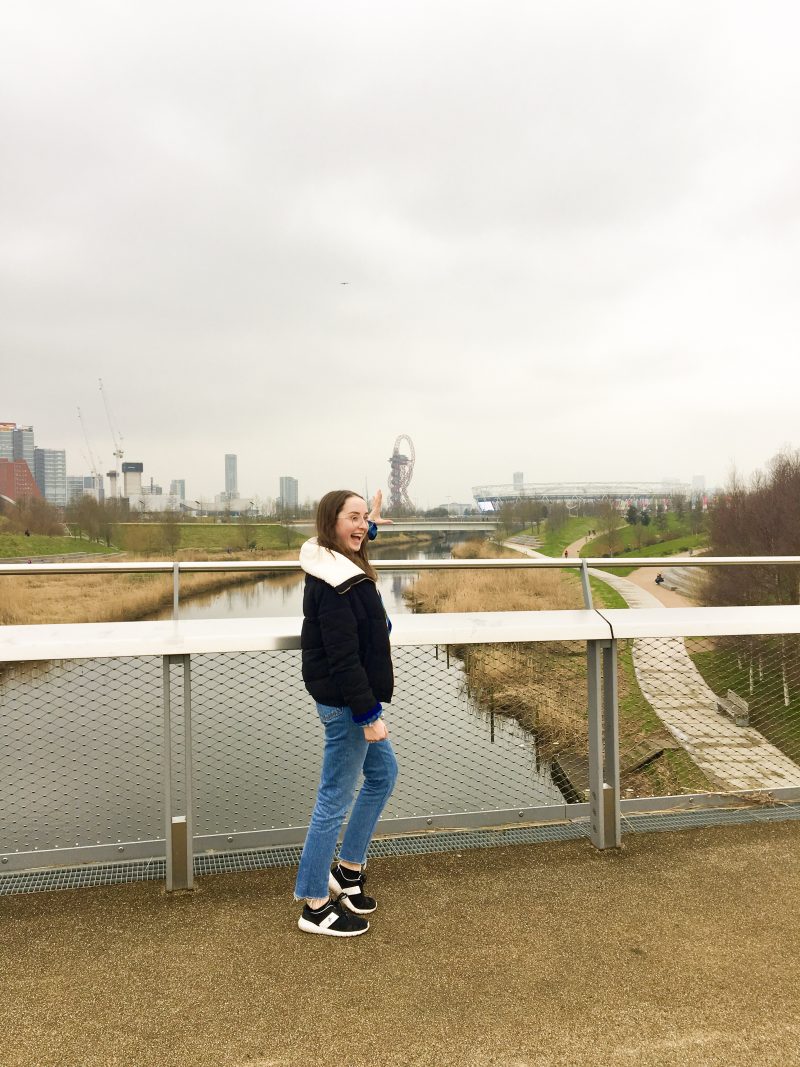 Seen from the far side of the park, it doesn’t look too bad. Belle can basically fit it in her hand so how tall can it really be?

And then you get closer and read the fun infographics telling you things like ‘ArcelorMittal Orbit is taller than the Statue of Liberty!’ and you start to feel a bit afraid. 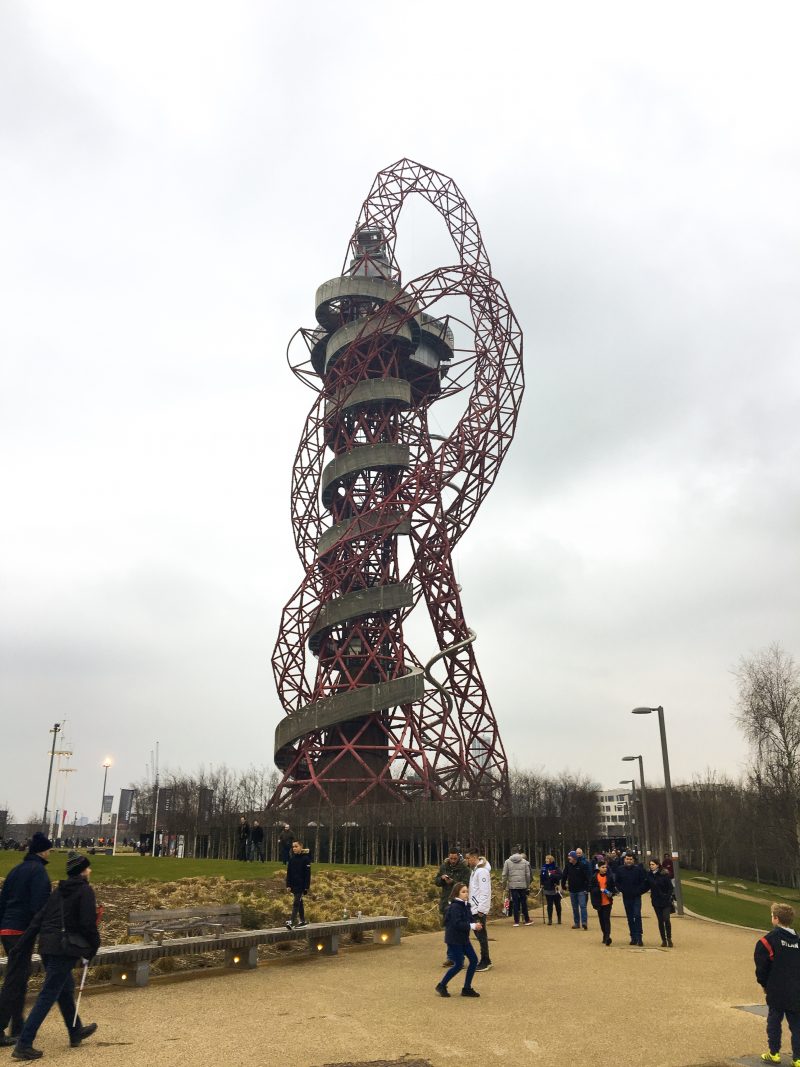 Can you see the silver coloured pipe weaving its way down the right hand side? That’s the slide.

It’s not until you get to the top though, and look down at the tiny ants on the ground and realise that they are PEOPLE, that you appreciate quite how high up you are. 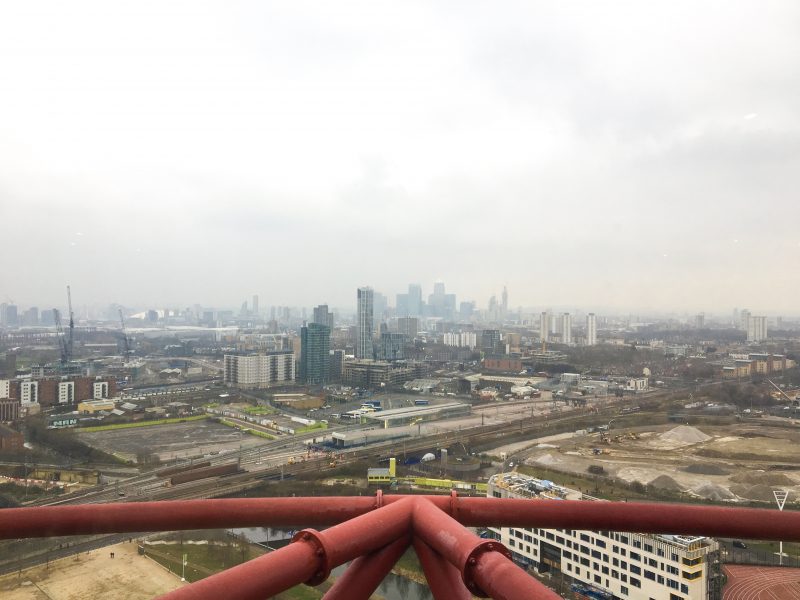 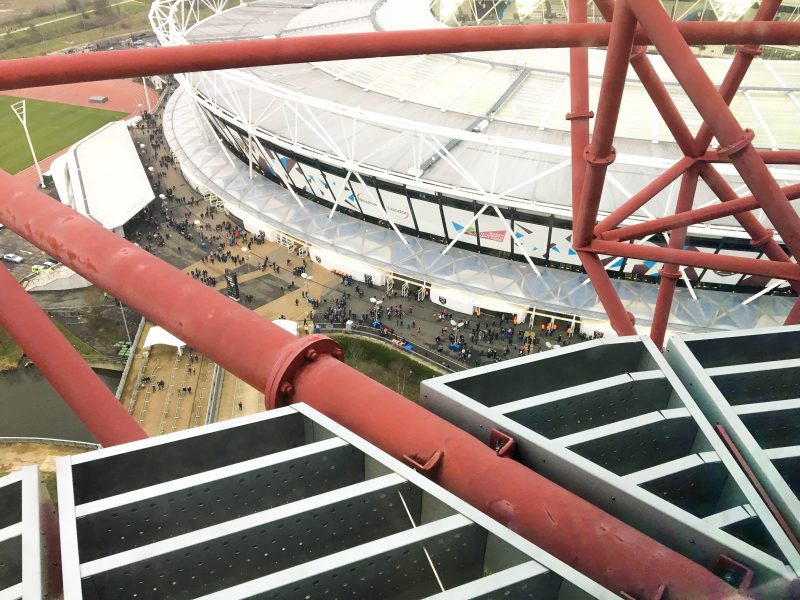 You also get to see sliders as they disappear off into the tunnel screaming. It sets the tone nicely.

You do need to be 1.3 metres tall and minimum age eight to ride the slide, but we saw quite a few kids getting ready to slide and it’s definitely a great activity to do as a family. (If you’re not keen you can always just admire the amazing views instead. You need to be accompanied by an adult if you are under 14.) 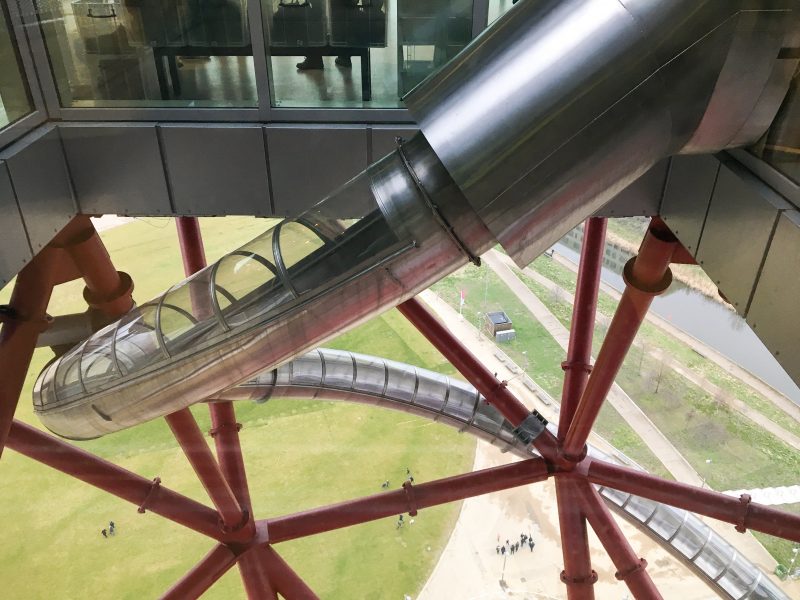 The good thing is that you have plenty of safety gear, including a sexy hat that I think I carried off extremely well. You’re given elbow pads too and a sturdy sack to slide in, so by the time you set off you actually feel pretty safe. 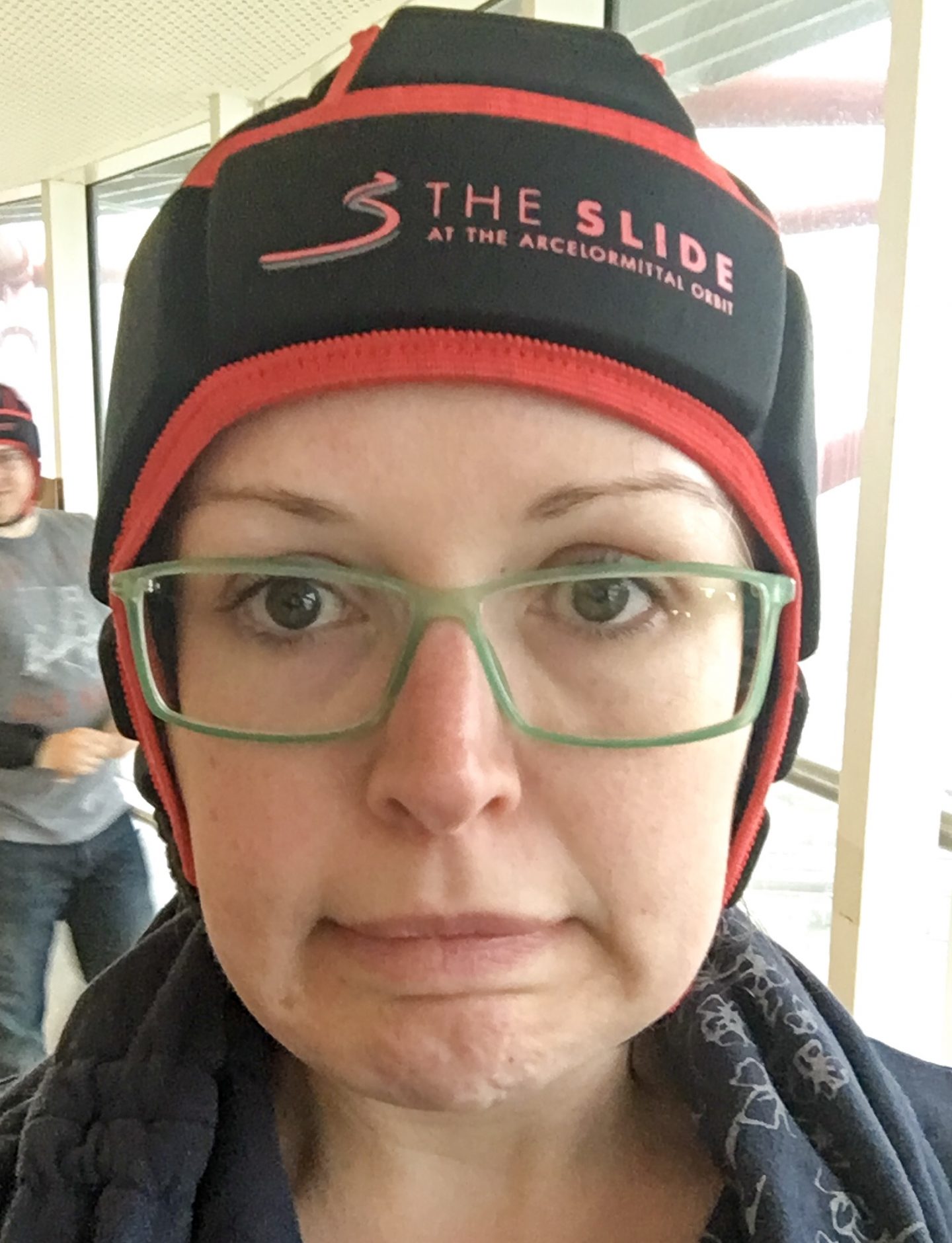 I was prepared for a bumpy ride, but it was actually really smooth. I’ve been of plenty of slides at water parks where you get bashed around all over the place, but it wasn’t like that at all. You go FAST, and there are plenty of twists and turns and stretches of pitch black, but no discomfort or bumped heads, just a really sense of speed and exhilaration.

You’re not allowed to film as you go down of course, but there are plenty of YouTube videos. Here’s one so you can get an idea:

Back on solid ground there is LOADS to do at Queen Elizabeth Olympic Park. You can take a swim in the London Aquatic Centre, where I hear Tom Daley is regularly spotted practising his diving, or keeping on a watery theme how about a ride in a pedalo or a boat tour on the river?

Or there’s the amazing Lee Valley VeloPark, where you can have a go at loads of different activities, like track cycling, road racing, or even a spot of BMX. If you’re a keen cyclist, there are plenty of Santandar bike stops around Queen Elizabeth Olympic Park too. Belle has always wanted to have a go on one of these so we hired bikes to take a tour of the park and to cycle over to the slide. 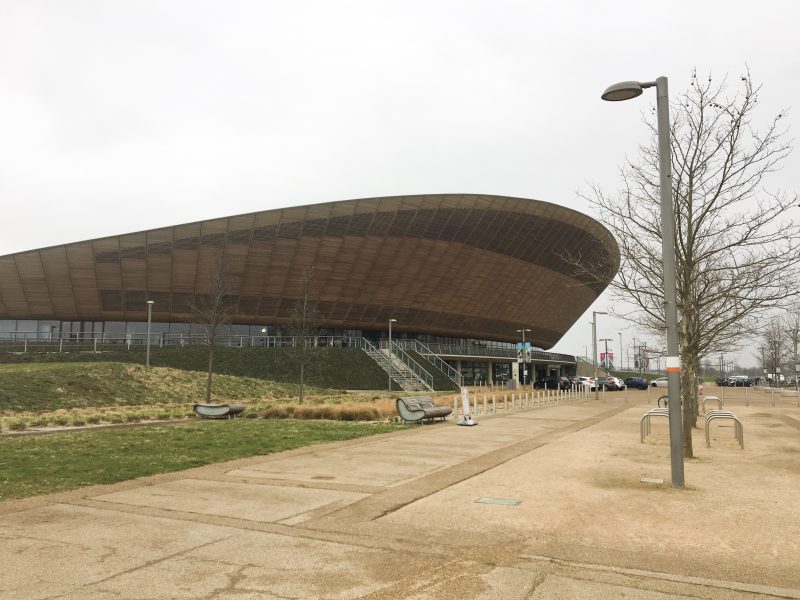 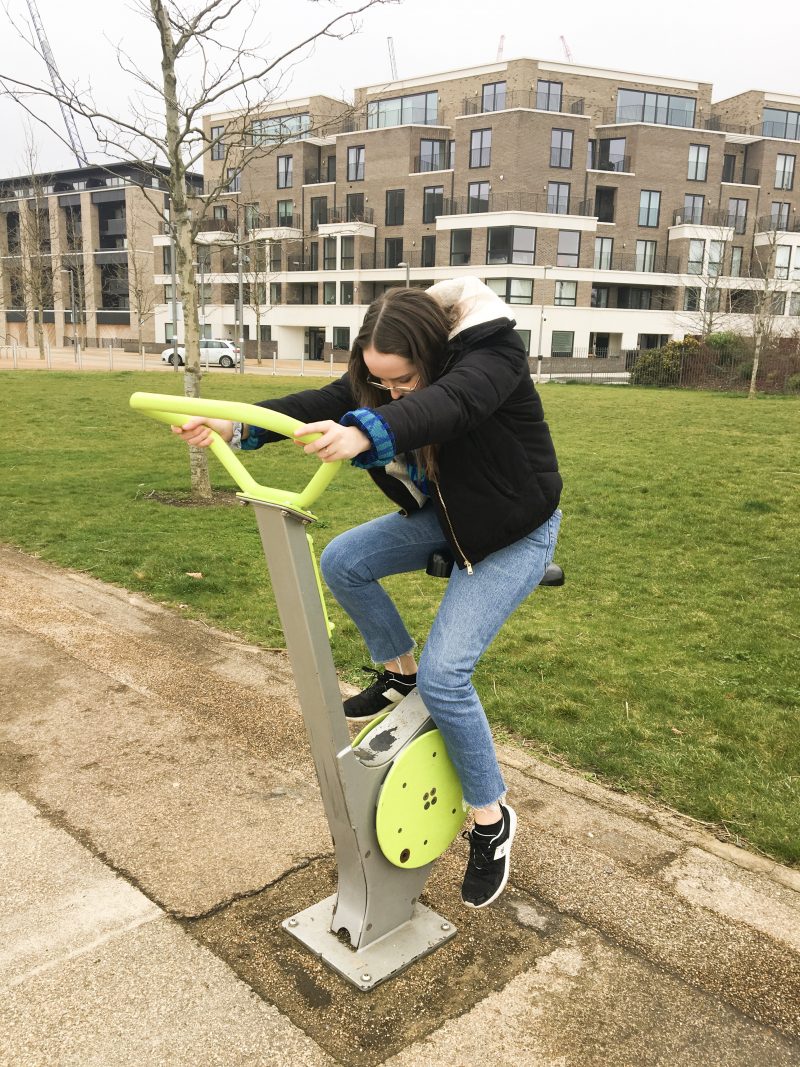 No Belle, that’s not a BMX

Even though we visited on a bit of a cold, grey day there were loads of people about, particularly families. There was a rugby match on in the stadium, and a Tough Mudder 5k taking place too, so there was a real buzz around the park.

We stopped off for lunch at the Unity Kitchen Timber Lodge Cafe. Normally the food and drink facilities in places like this can feel like a little bit of a let down – ready made sandwiches at high prices for a captive audience.

The Timber Lodge was anything but.

Pretty much everything is prepared fresh on the day using great ingredients and prices are really reasonable too. Belle opted for the vegetarian chilli (she said she was pushing herself out of her comfort zone) and I had the homemade lamb burger with paprika wedges because I had a mild sambuca hangover and was keeping well and truly INSIDE my comfort zone. 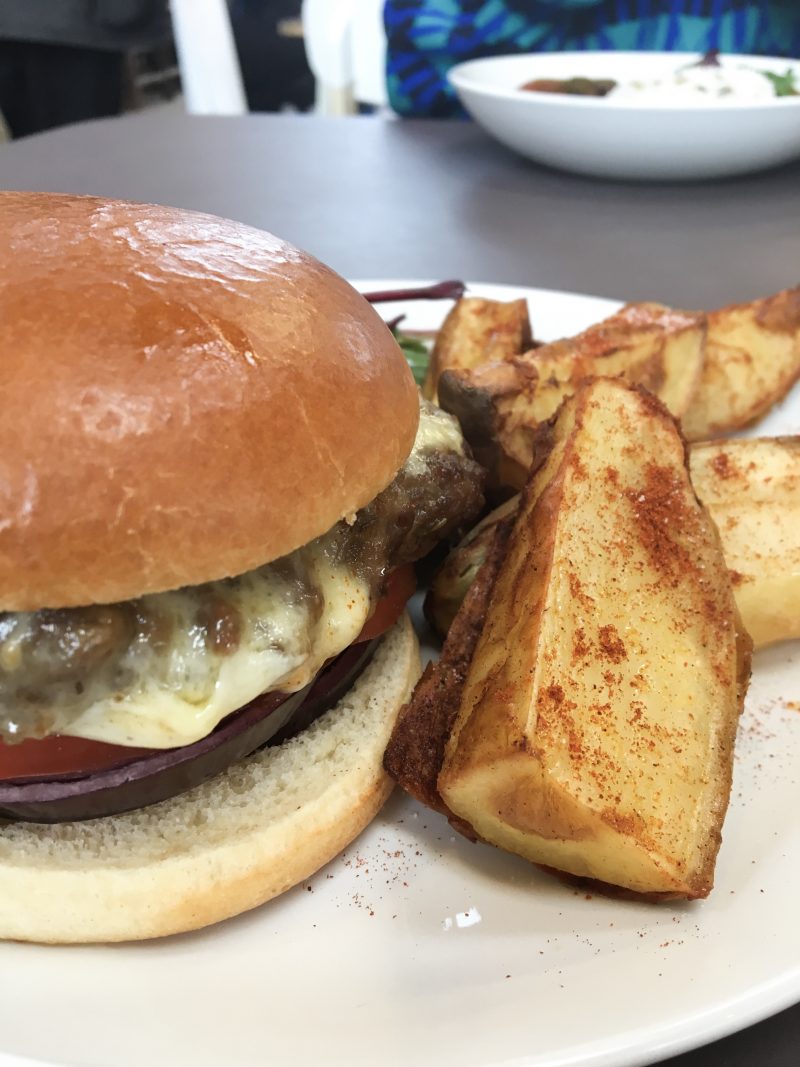 The cafe was just next door to a lovely looking playground – the Tumbling Bay adventure playground to be precise – and it was clearly a popular stop for families with younger children.

What’s especially nice about the cafe is that it’s a social enterprise – they spend every pound of profit to
directly support people with disabilities to get valuable training, build a career and plan for a great future. So you can eat your burger and feel good about yourself at the same time.

Queen Elizabeth Olympic Park is not somewhere I’ve ever thought to visit before – I didn’t really know much about it and if you’d asked me I would have imagined it as taking some time to get to. How wrong I was! We got a train from St Pancras that took just SIX MINUTES.

If you’re in London with the family over Easter then I definitely recommend a trip to Queen Elizabeth Olympic Park. Attractions like the ArcelorMittal Orbit slide ARE very popular, so do book in advance for specific activities.

Check out the website for more information about things to do at Queen Elizabeth Olympic Park. 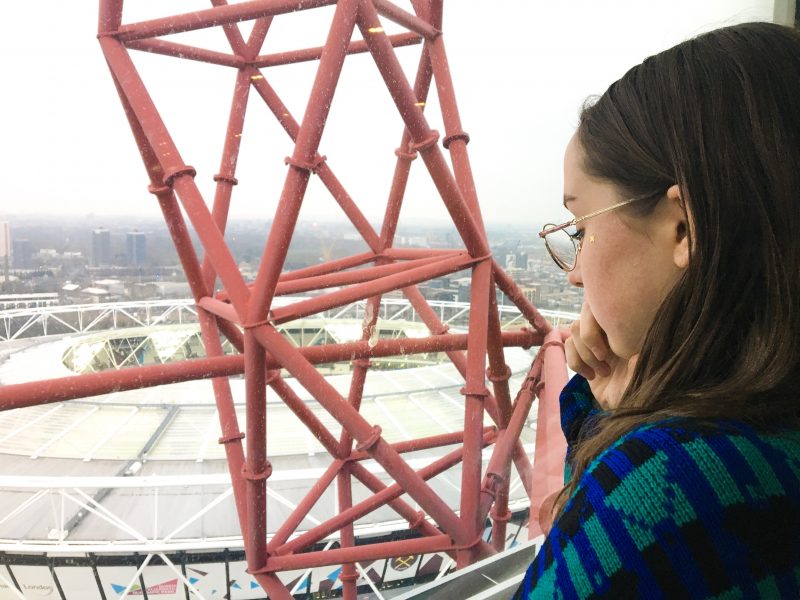 Belle prepares herself mentally for going down the fastest tunnel slide in the world.