What do you love most about yourself? That’s a good question isn’t it? Today I explore the idea and come up with three things which could be perceived as weaknesses, but that I consider strengths.

What with life being completely tedious lately, I’ve been struggling to think about things to write on my blog. I did the whole banana bread thing, then I did MINI banana breads… there’s not really anywhere to go after that is there?

‘Wow guess what guys? I sat about at home today! It was so inspiring!’

Instead I thought perhaps the time had come to start thinking about STUFF. You know, STUFF. The inside bits, the big questions. My word of the year is SELF after all, and as this hasn’t been able to translate itself yet into spa days, maybe for now it needs to be a bit more introspective.

To spur me on, I bought a pack of ‘Questions to Empower‘ cards from Mål Paper. It’s 52 cards, each with a different question on it, designed to encourage self reflection. Perfect, just what I need to save me having to come up with original ideas. The cards arrived. I opened them. I gave them a shuffle and turned over the top card. 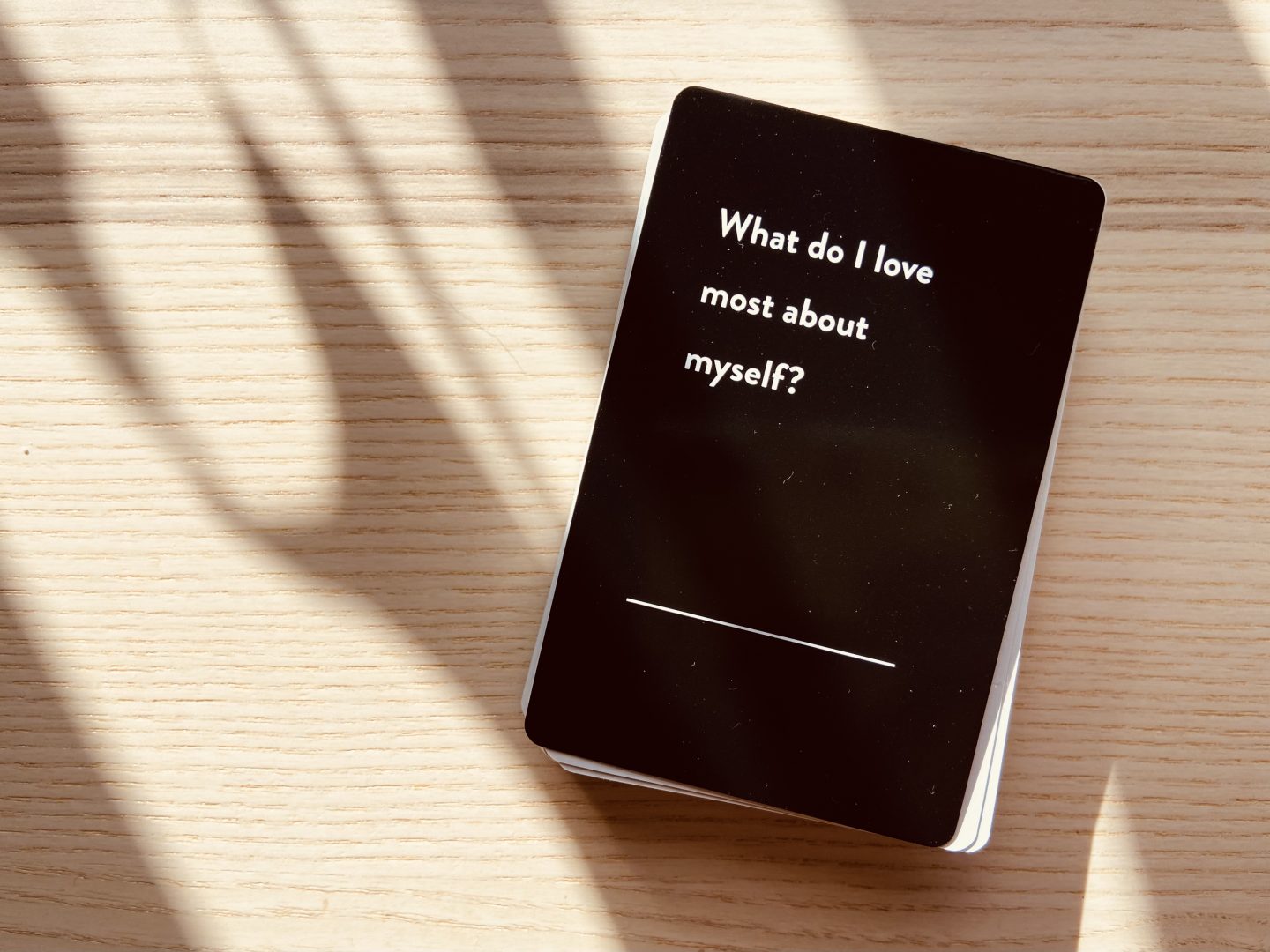 ‘What do I love most about myself?’

I felt relieved, like the cards were easing me in gently, because to be completely honest there are a lot of things I love about myself. I know the done thing if someone asks ‘what do you love most about yourself?’ is to point out your flaws and be secretly full of self loathing but I generally think I’m pretty great. I’m nearly 43, I’ve been a parent since I was 17, I’m kind, generous, smart, funny, modest… I’m a solid 9/10. (You have to keep something back otherwise you get lazy.)

I gave the question time to settle though, and mulled it over a bit. I wanted to think about some of the things I loved about myself that could be perceived by other people as flaws – the less obvious things that nonetheless make me who I am. Here are a few of the things that I came up with.

I love that I am so trusting

I am not a natural liar. I find it much more straightforward to be honest – too honest sometimes – and so I just assume that everyone else is the same. Lying is complicated. Telling people things just because you think they want to hear it just feels bizarre to me. And yet I have learned, again and again, that a lot of people lie. People will tell you all manner of nonsense if they feel it will get them what they want or keep you happy, or if they feel ashamed or worthless or any number of other emotions.

This becomes a problem for me in relationships, and there are plenty of times I’m sure where I’ve been taken advantage of as a result, but I wouldn’t change it. I don’t want to be cynical. I don’t want to just assume everyone is lying until they’ve proven otherwise. I want to continue to go through life happily humming out loud and smiling and thinking the best of everyone.

I remember, quite a few years ago now, I’d been doing something like hula hooping classes, and I’d got kind of fed up with it and decided to stop. My boyfriend at the time was unimpressed. ‘You’re always quitting things,’ he said, ‘you should stick at things if you start them.’

At the time I felt hurt and defensive about it, (it came off the back of this doomed non-relationship where I was basically told I was too fickle to be worth the risk), and I tried to come up with examples of things I had stuck at to prove him wrong. But actually he wasn’t wrong, not in the first part of the sentence at least, because I am always quitting things. (You may have noticed me not mentioning again that interior design course I started at the beginning of the first lockdown.)

But you know why? It’s because I’m always TRYING things. I like to have a go. When you like to try new things you have to balance it out by giving up sometimes because otherwise there just wouldn’t be the time. Can you imagine if you were still doing everything you’d ever started? It would be ridiculous. I’d be an excellent hula hooper by now though, and my cello skills would be top notch.

I love that I’m not afraid to stop doing things when I’m not enjoying them, even if I’ve signed up for a year or already paid for 12 sessions or whatever. (‘It’s a sunk cost!’ I’m always telling my children. ‘You’ve spent the money already, no point making it worse by making yourself do something you don’t want to do.’)

I love that I rush into things

I wouldn’t say I was a ‘thinker’. In fact I have a bit of a cheesy personal motto, which is ‘ready, fire, aim’, as in ‘baaahh, just have a go! You can always figure it out along the way!’

I love that I rush into things though because really what’s the alternative? We have less and less time left in our lives with every day that goes by and do you really want to spend a significant chunk of it deciding where you want to go on holiday? Just GO somewhere. It’s a holiday, it will probably be fun whatever happens.

My whole life I have rushed into relationships – I’ve literally had people not leave after coming to my house for dinner for the first time – and although I have managed to adopt a slightly more mature approach as I’ve got older, more set in my ways and less keen to give up space in the wardrobe, I still tend to rush in on an emotional level. I’m not that person who waits for six months until they tell someone they love them. I don’t ‘play it cool.’ I love the falling in love hormones and the alternating rushes of anxiety and joy. (It’s why I’ve never dabbled with drugs as I’m sure I’d be a natural drug addict.)

I love that I rush into things work wise too. If I’d not got drunk one Sunday and emailed my resignation to that housing association in 2009, would I even be here now? (See above point about quitting things.) If I hadn’t just rocked up at Smiths, copied down the email addresses of dozens of magazine editors and emailed them all saying ‘I’m a writer now!’… well, I definitely wouldn’t have become the South-West correspondent for Park and Holiday Homes Magazine at least.

You have to just go for it sometimes, and I love that about myself.

What do you love most about yourself? Leave a comment and let me know.