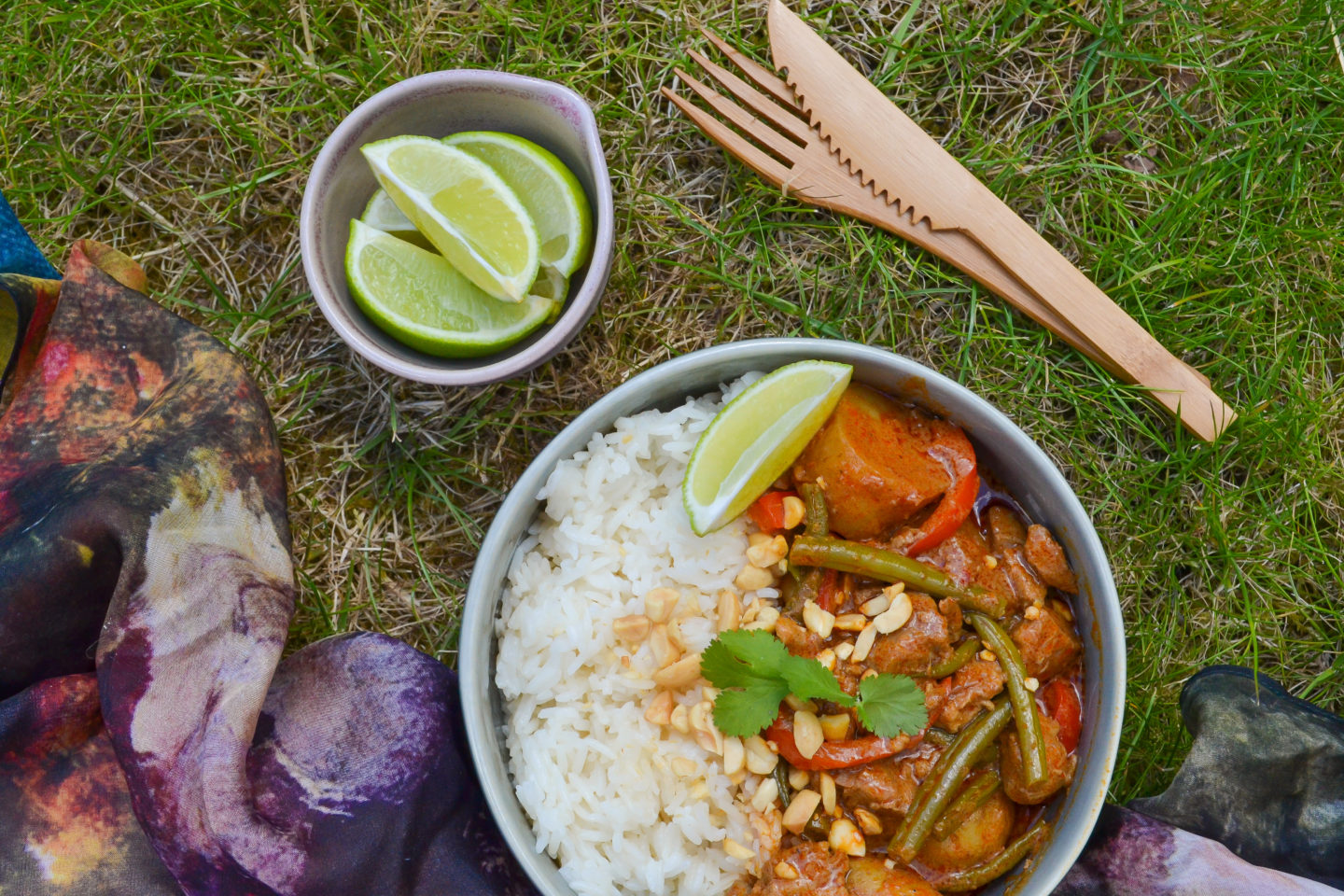 No, ‘Slowthai massaman lamb curry’ is NOT a typo, honestly.

I’ve been working with the ‘Lamb. Try it, Love it‘ campaign for a while now, creating all kinds of yummy lamb recipes, including Greek lamb meatballs, Game of Thrones rack of lamb, (a must see in my opinion) and a classic Irish stew.

When I heard that my lovely lamb chums were going to be at Kendal Calling, a festival in the Lake District that’s on from 25-28 July, with the ‘Lamb Bam Lounge’, well… it would have been rude not to create a festival inspired lamb dish wouldn’t it? Nothing beats being sat out on the grass on a sunny day with a big bowl of something yummy from a festival food truck. 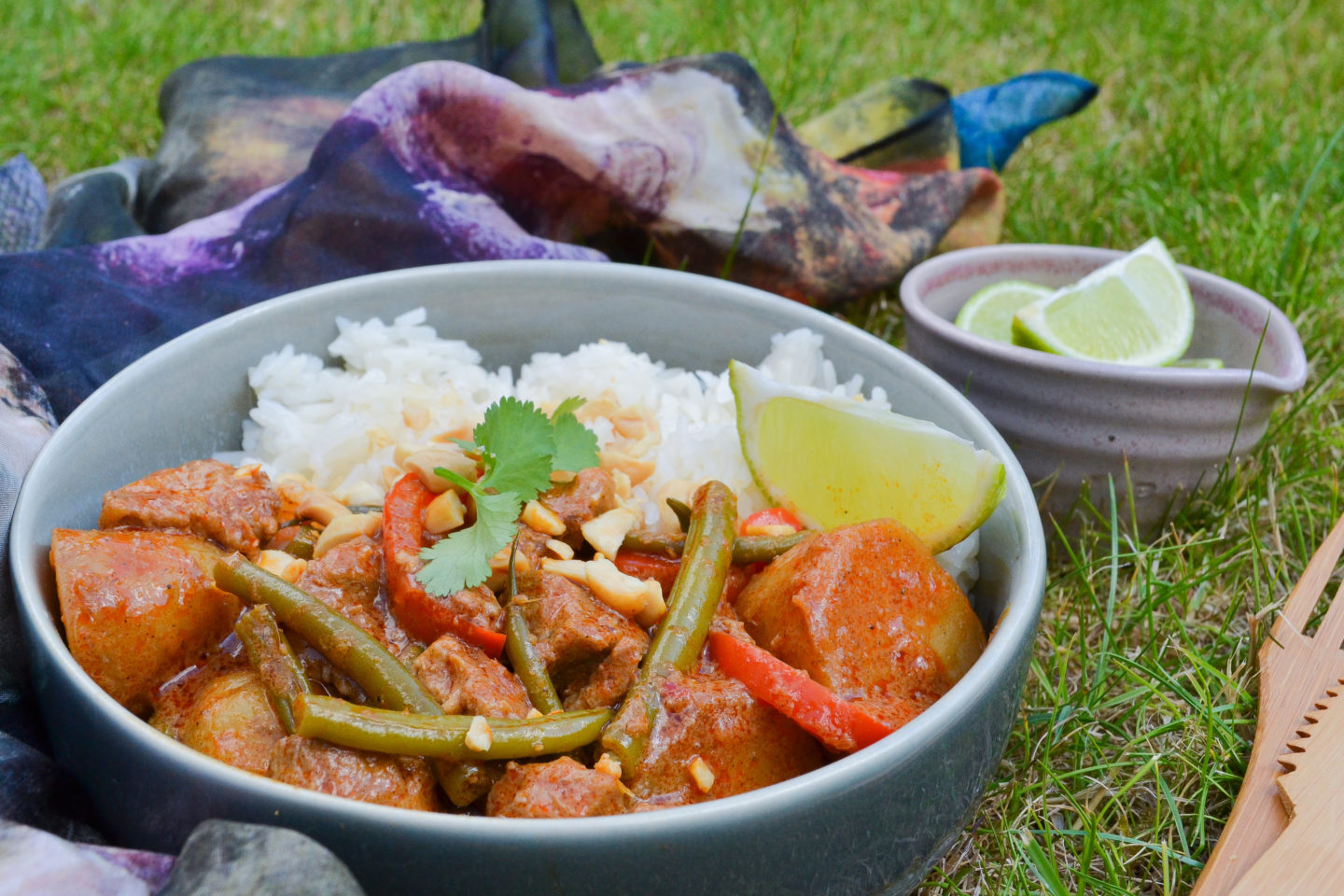 In fact, I decided to go one better, (as is my way), and create a festival lamb recipe inspired by one of the acts playing at the festival! Because who doesn’t love a pun??

I scoured the line-up.

Obviously I was drawn immediately to a band called ‘The Lancashire Hotpots’ but that was a bit too obvious, even for me, plus Lancashire hotpot isn’t a very festivally thing to eat is it? I saw that Gerry Cinnamon was playing – Gerry Cinnamon lamb tagine perhaps? I put it on the ‘maybe’ list.

And then I saw ‘Slowthai’ who, if I’m completely honest, I’ve never heard of, but he was in a big font on the listing so was clearly important. A Thai curry is an absolute festival staple, and lamb cooked slowly over a long heat is delicious. The deal was done, I was making a slow Thai lamb curry. Or rather a ‘Slowthai lamb curry.’

(I know, I know, I am so funny it hurts sometimes.)

When you think of Thai curries you probably think of the classic red and green, but there are actually quite a few different types of Thai curry. The massaman curry comes from the south of Thailand near the border of Malaysia. It has a richer, warmer flavour than a red or green Thai curry and is milder and sweeter.

This swung it for me as a recipe choice as I am a complete wimp with heat in curries and normally find a red or green curry too spicy. It also stands out from other Thai curries by including toasted peanuts. As well as the tradional lamb and potatoes, I also added red pepper and green beans to my curry, partly for colour, partly to add a little bit of crunch – I’m a big fan of a green bean. 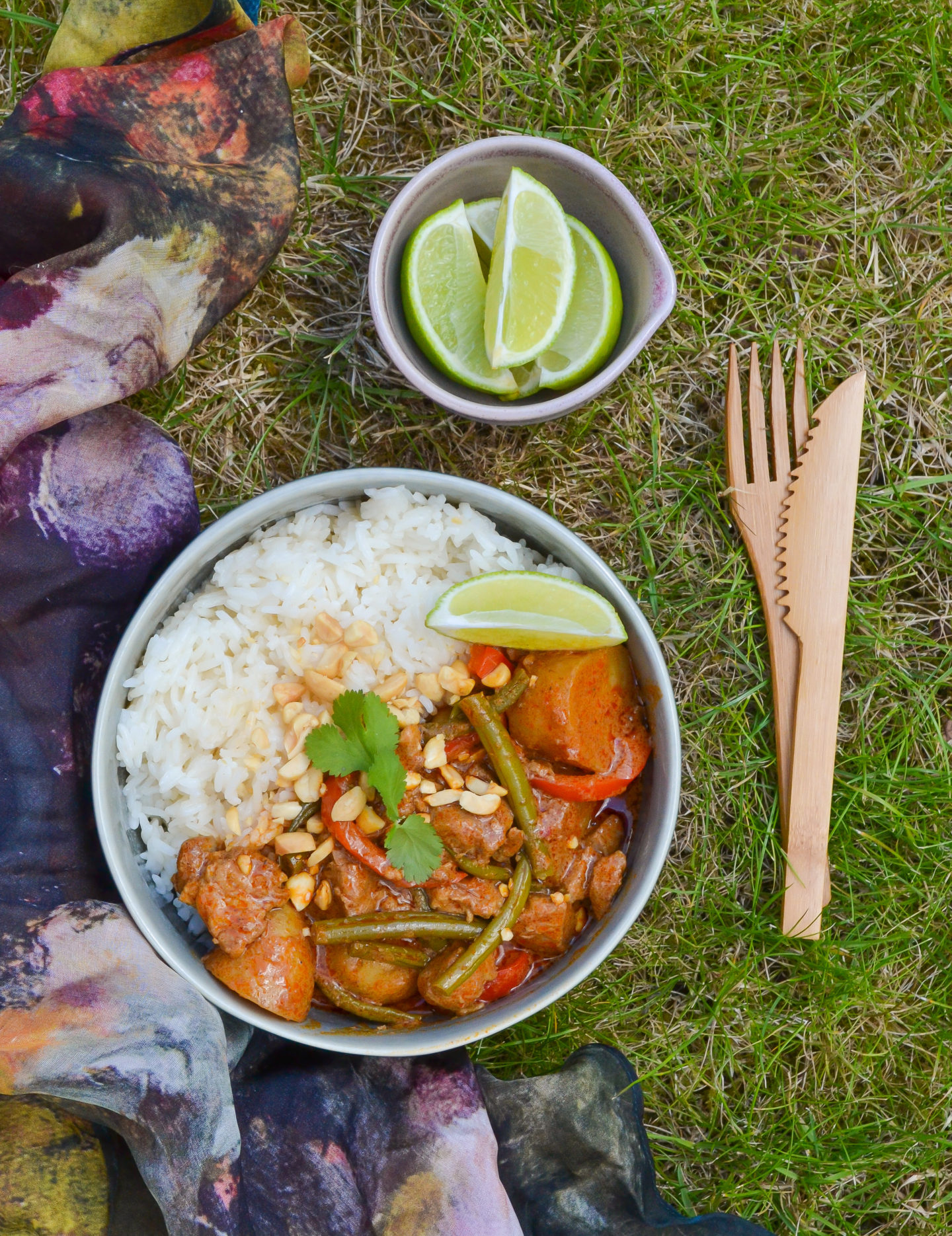 I think this is probably one of the nicest curries I’ve made in a really long time and I would definitely make it again – the lamb was beautifully tender, and I just love a firm, buttery new potato in a curry. While you could make your own curry paste from scratch, I cheated and used a jar of Sainsbury’s massaman curry paste. I’d never tried it before, but would buy it again – it was yummy.

If you want to have a go, this recipe would serve around four people.

To make your own slow cooked lamb massaman curry you will need: 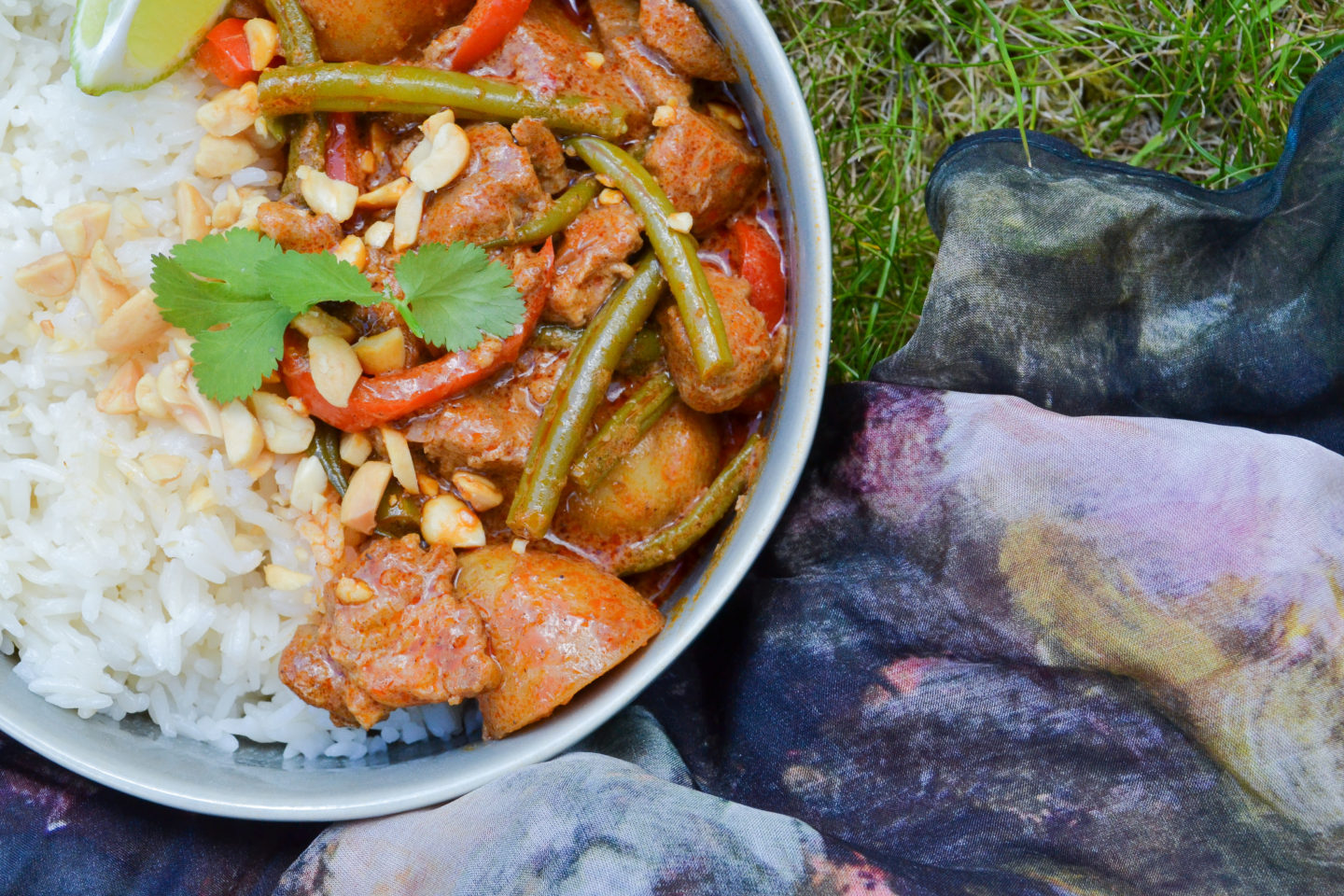 To start your lamb thai curry, heat a large pan and add the lamb and potato, stirring gently until the meat is browned. Drain off any excess fat.

Add the curry paste and cook for a further couple of minutes, stirring to coat the meat and potatoes. Add the coconut milk, lime juice, fish sauce and sugar, stir well, cover and simmer gently for about 70 minutes, stirring occasionally.

Top and tail the green beans and cut them in half. Chop the pepper into green bean shaped pieces i.e. thin strips. After the curry has been simmering for 70 minutes, add in the vegetables and stir well. Continue to simmer for another 20 minutes.

Sprinkle your Thai lamb curry with toasted peanuts and serve with jasmine rice.

Are you going to any festivals this summer and if so, what’s your favourite festival food?

If you’re at Kendal Calling go and check out the guys from the ‘Lamb. Try it, Love it‘ campaign in the Lamb Bam Lounge! 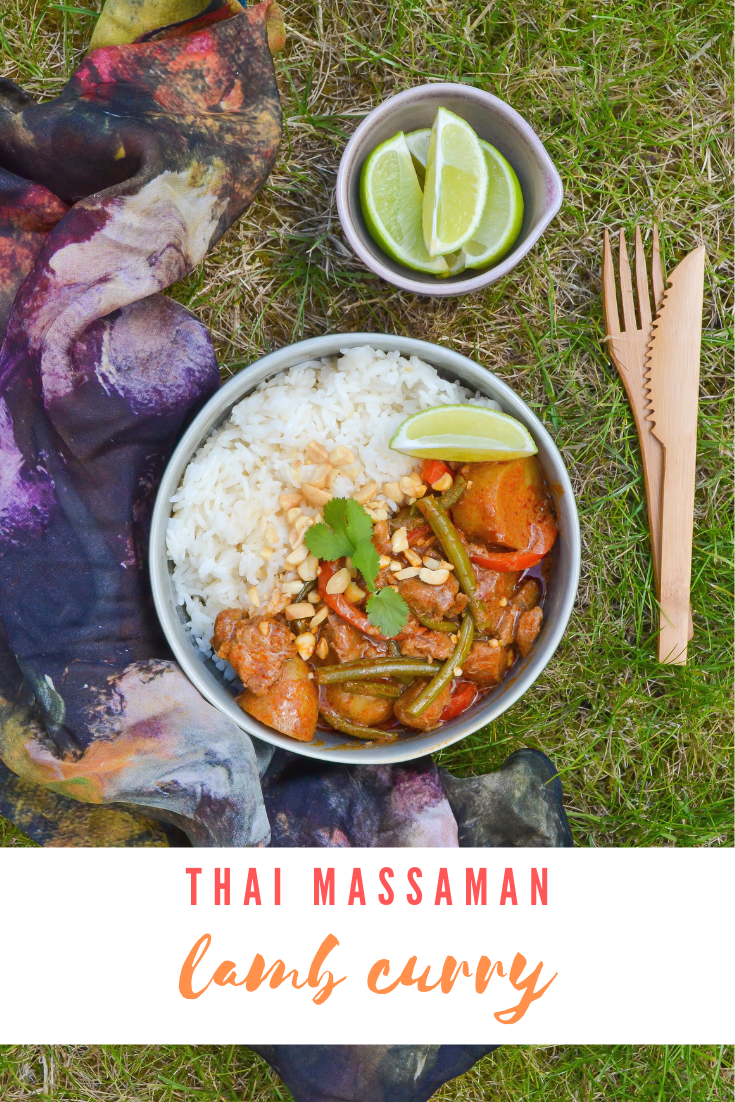