Advertisement feature in association with the ŠKODA Parent Taxi App

Earlier this week I introduced the ŠKODA Parent Taxi App. You remember? It had that video in it, of me trying to look super casual and cool behind the wheel? Go back and have a read if you’ve forgotten.

Basically it’s an app, created by ŠKODA, that allows you to track your journeys using GPS and ‘charge’ your kids in chores for driving them around. ŠKODA loaned us a car for a couple of weeks, (which was an absolute joy to drive – I love a ŠKODA), and we put the app to the test. 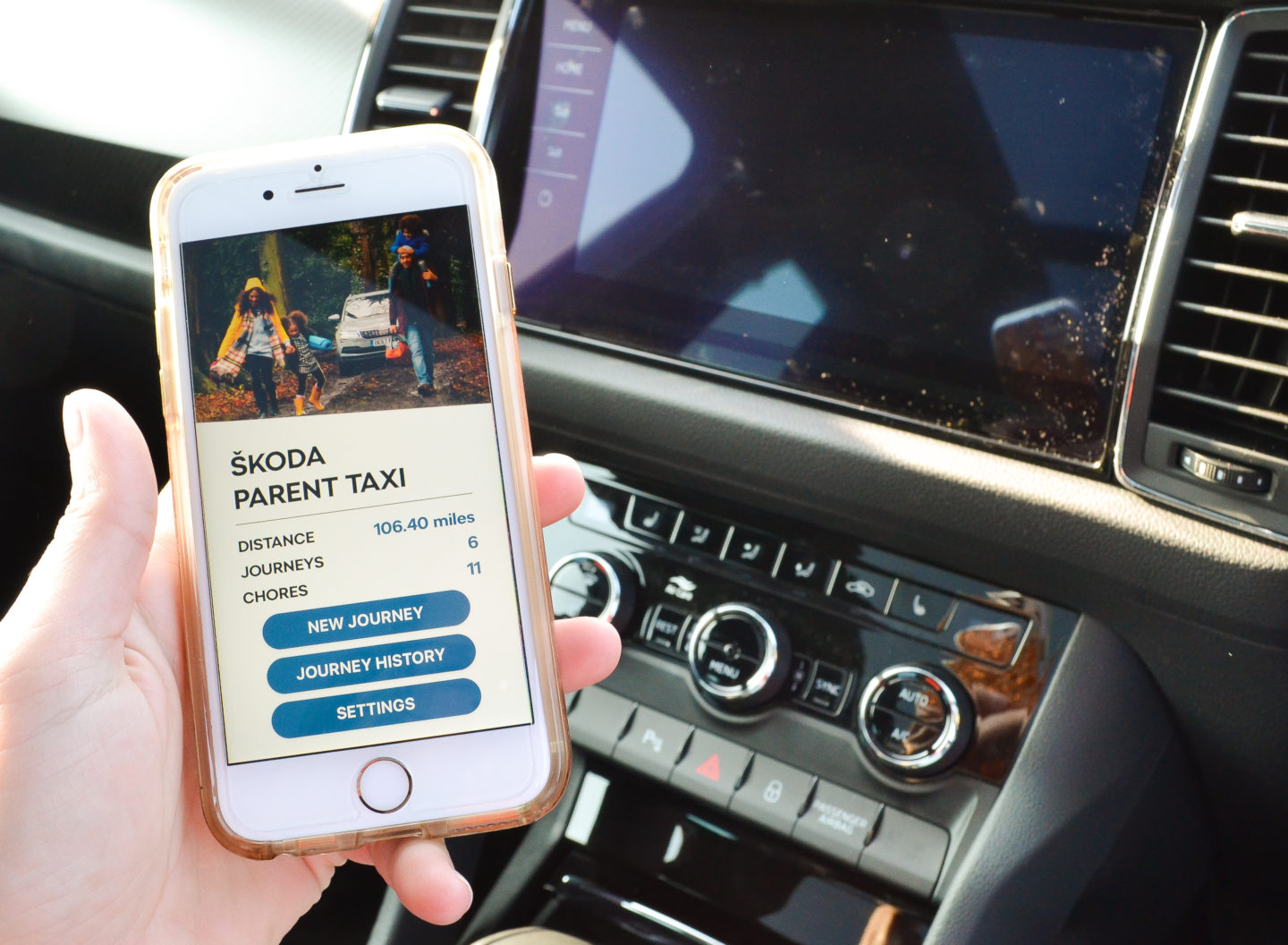 Now I COULD just talk here about how annoying it is as a parent to have to drive your kids around to meet their friends or go to hockey practice or whatever, and how the app teaches them the value of time and money, but actually our relationship with our car is a bit more complex than this. I thought this might be interesting to explore, as I suspect that for most people, parenting a teenager isn’t quite as simple as you may have been led to believe.

(That sounds a bit ominous doesn’t it? I feel like this post has the potential to get very deep very quickly.)

If you DO have one of those vibrant, wholesome teenagers that DOES enjoy hockey practice and has actual friends that they see regularly in real life, then the ŠKODA Parent Taxi App is going to be right up your street. All you have to do is decide how many miles you want to equate to one chore, and off you go. 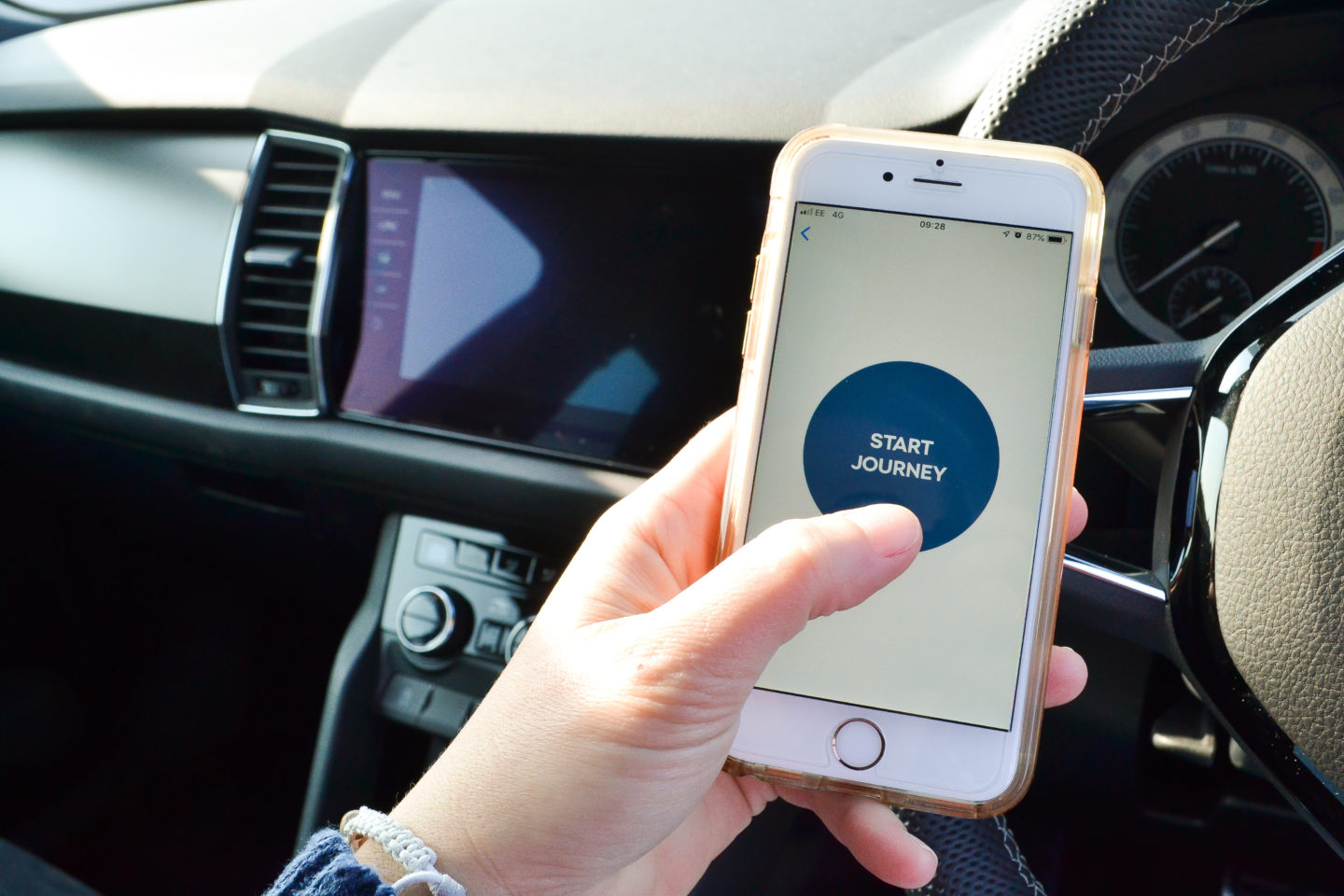 Belle thought she was getting one up on me here, by setting it to the maximum number of miles allowable in settings, but the app works like a taxi in that it has a minimum fare – it STARTS at one chore, at zero miles, and then ticks over to two chores once you hit the number of miles specified. I would think that most parents will be driving their kids on short journeys of less than a few miles, so actually it doesn’t matter how you set it up, they’ll normally be doing one chore per journey regardless.

Let them THINK they are winning though, no harm in that. 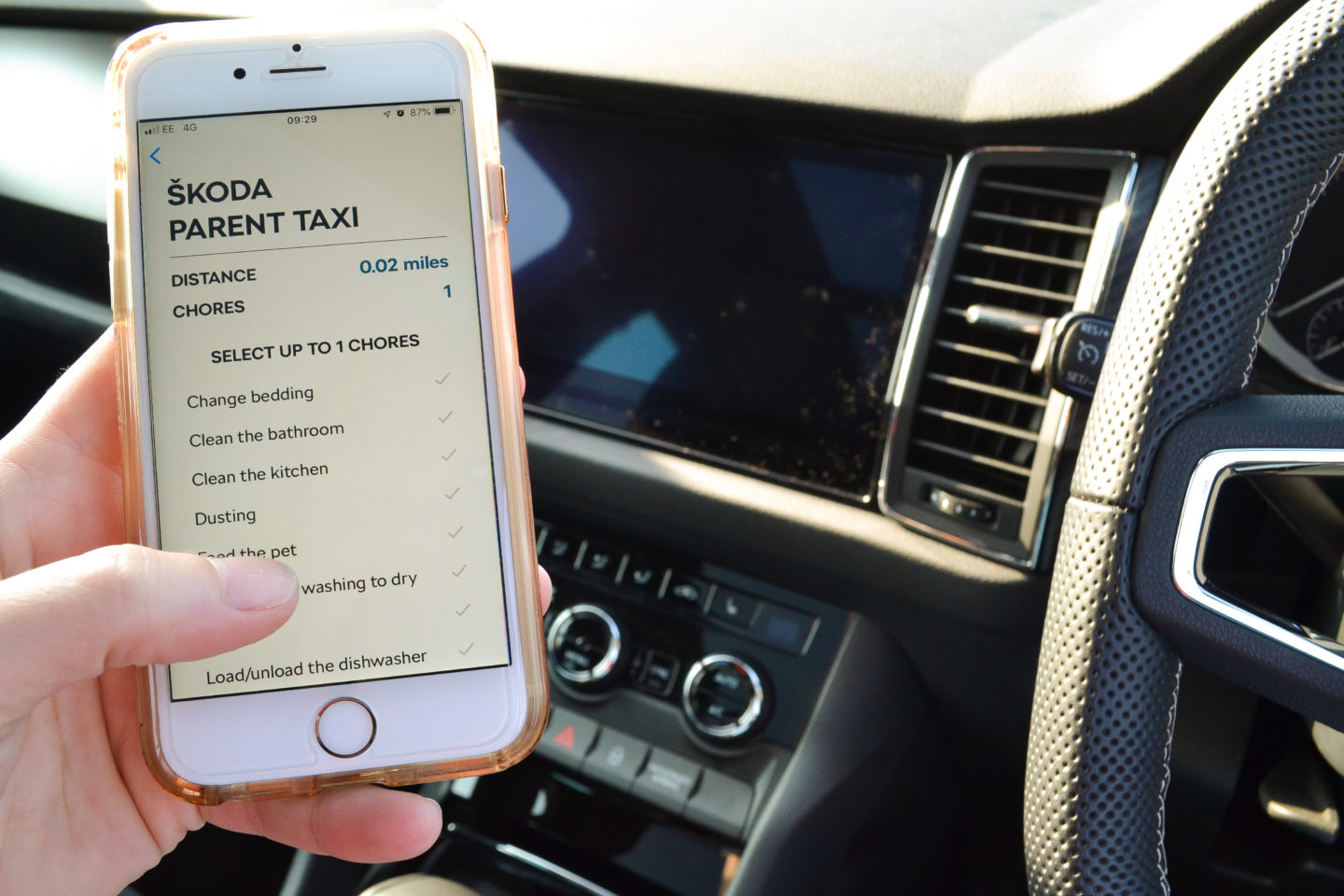 But then you start using it and it really makes you think.

Because what if your teenager is more the ‘will stay under a blanket watching TV for 10 hours at a time unless you make them leave the house’ type? (I’m sure this can’t be just mine.) Where do you draw the line then between what is you doing them a favour by driving them around and what is you getting them outside for the sake of their mental health?

When I talk to parents of teenagers, many of them are struggling with the same issues. Today’s teenagers seem to be a fragile generation, both mentally and physically, and I feel sure that it can’t just be just my friends who are experiencing this with their children. I’d be interested to know though, if you have teenagers, what your experience is.

And what about lifts to places that they don’t really want to go? Belle is on what could politely be called gardening leave from college at the moment, but for the first term, when I was trying to make it work for her, one of the only ways that I could guarantee her going was to drive her there and pick her up. If I had told her that a lift to college would equate to one round of washing up she would have just said ‘fine, I won’t go then.’ 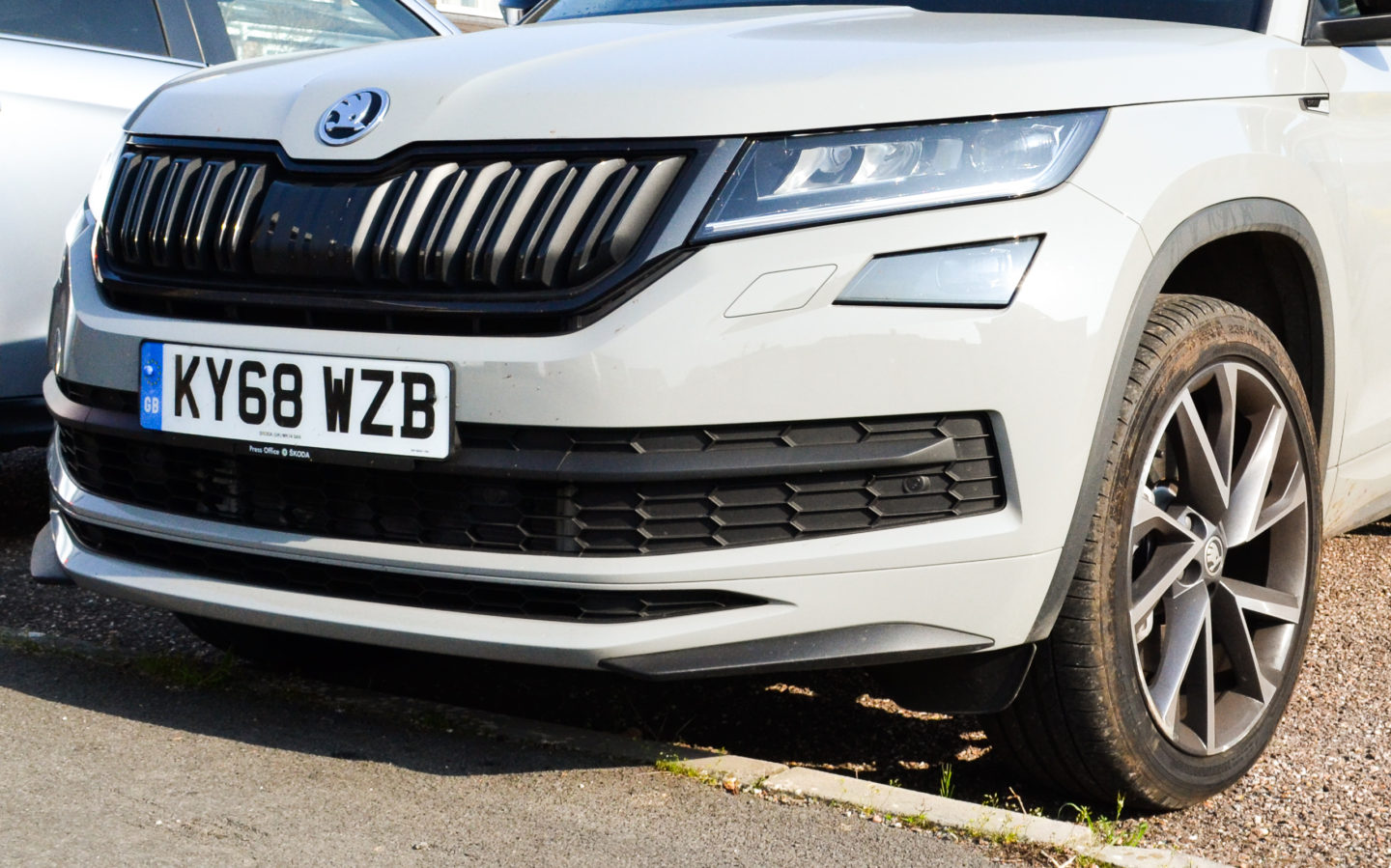 All of this of course feeds into a bigger question – one of responsibility, independence and letting go as a parent. To what extent am I being over-protective of Belle if I don’t insist that she holds herself accountable and contributes to the family? (When it’s just two of you living at home this is a big question.) I know that I’m guilty sometimes of being a soft touch, of not wanting to push Belle to doing anything that might add to her stress or sadness, but is that helpful in the long term?

I don’t know the answers.

Perhaps using something like the ŠKODA Parent Taxi App though is one way to start making her appreciate just how lucky she is, how much I do for her, and how she could reciprocate that support if she wanted to? As part of a strategy to help Belle take more responsibility and, perhaps more importantly, support me in letting her, the ŠKODA Parent Taxi App could prove invaluable. 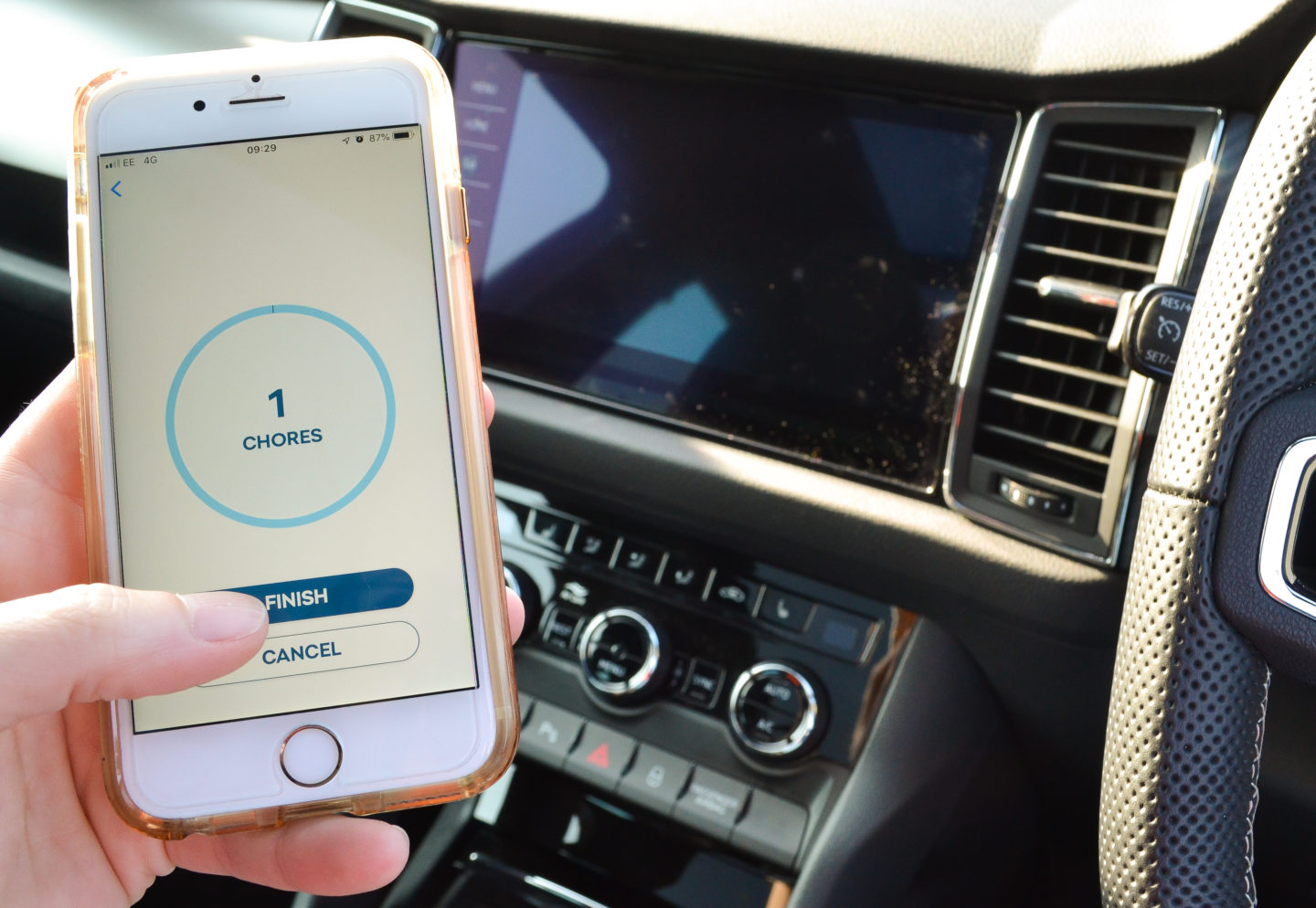 If you have older children or teenagers then I would definitely recommend downloading the ŠKODA Parent Taxi App and seeing how it works for you. You may be surprised by how much it makes you think about your relationship with your children, your parenting style and the different ways in which you can encourage a sense of independence and responsibility.

Or you may just get the washing up done for you. Either way’s a win.