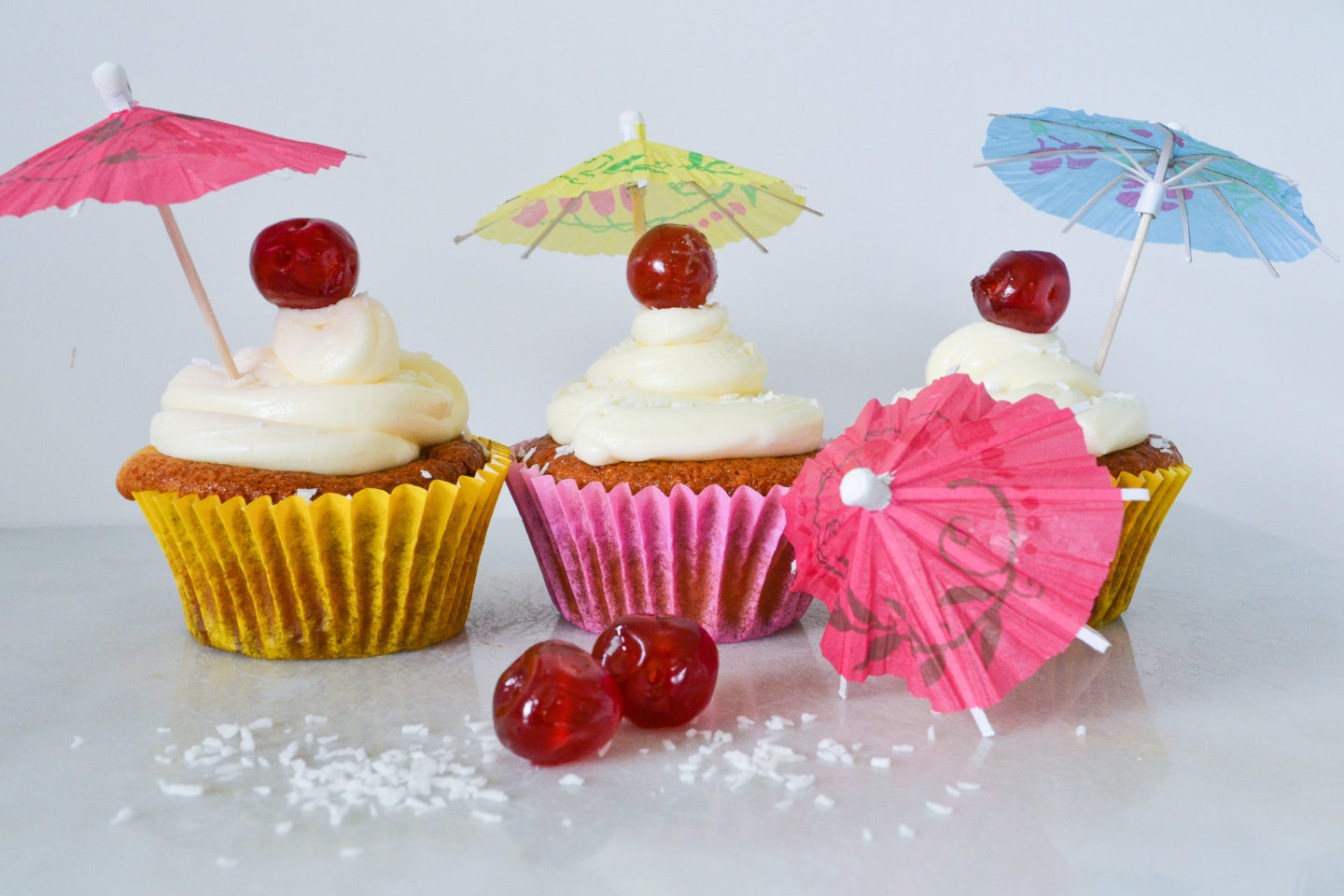 God, there are so many words to like in that sentence aren’t there? Vegan piña colada cupcakes with Malibu buttercream. Where to even begin??

Let’s start by taking a moment for me to get over the Malibu buttercream bit. It’s about 10.30am as I’m writing this, I’ve finished making the cakes, and I’ve just had to bury the piping bag with all the leftovers in the bin as a personal frosting intervention. I was literally standing at the kitchen window, first thing in the morning, squeezing Malibu buttercream into my mouth from a bag.

DAMN. It was so good.

To be honest, if you just wanted to skip ahead and make a bowl of frosting, close the curtains, and put on a DVD of the Golden Girls I think you’d have a pretty good evening, but if you do want to faff about making the cakes as well then you’re very welcome. It does all work together well and the pineapple centre allows you to pretend you’re having one of your five a day. (Possibly two if you count the cherry.) 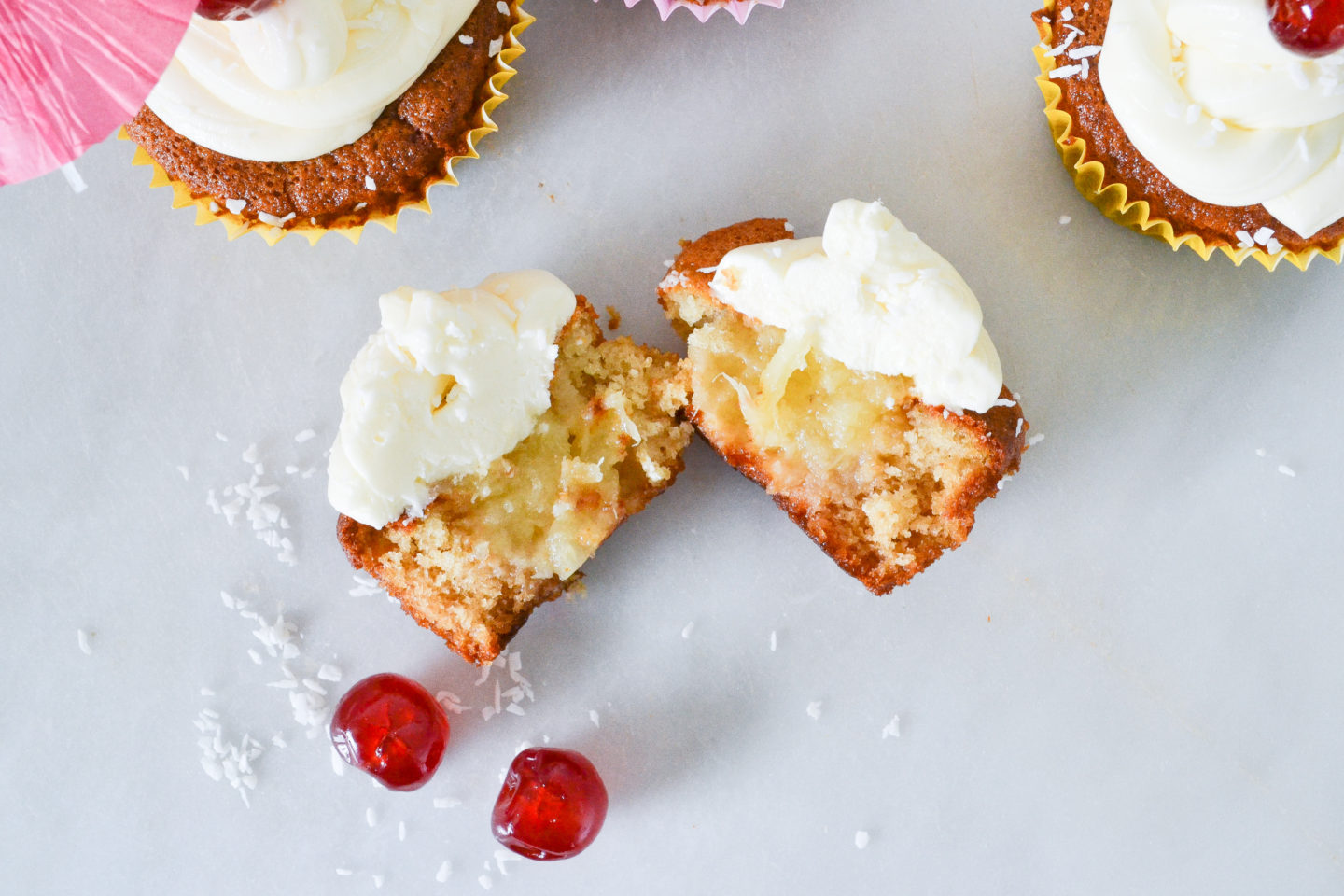 These piña colada cupcakes are completely vegan – stick all the ingredients on your shopping list for vegans –  so rest assured no animals had to suffer in the name of your coconut cupcake pleasure. (I want to say it would almost be worth it for the buttercream, but that’s probably pushing the humour a little bit, so let’s keep that in brackets where no one can hear it.)

The whole idea of piña colada cupcakes was inspired by a conversation I had recently with Indigo Herbs. They’re a local company, based near me in Glastonbury, and they sell all kinds of nutritionally rich organic superfoods, herbal powders and loose herbal teas. I was taken by the idea of organic coconut milk powder. I didn’t even coconut milk powder was a THING, so I felt like this could be a bit of a game changer for me, especially as tinned coconut milk isn’t exactly cheap.

Their organic coconut milk powder is basically evaporated coconut milk in powder form, so you can keep a bag of it in the cupboard and just dip into it when you need it. You can add it to curries, stews, puddings or smoothies, or add hot water to it to make coconut cream or coconut milk. You can use it for pretty much anything you fancy adding a bit of coconut fun too. It’s a source of iron, high in potassium and a rich source of medium-chain triglycerides (MCT’s).

When I think coconut I think piña colada – everyone does right? – so here we are. It’s a step up at least from the vodka and berocca cocktail idea. 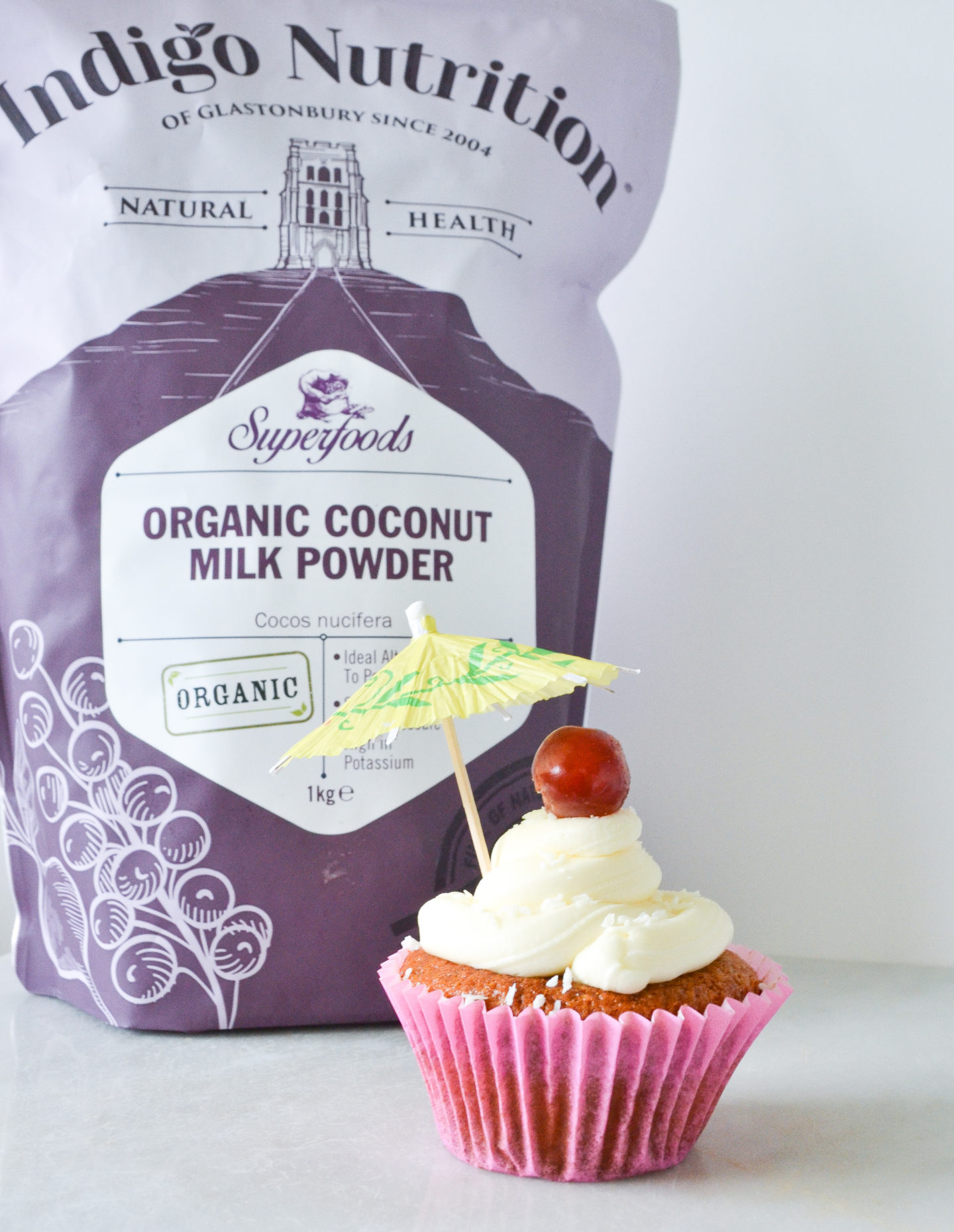 This is a BIG bag of coconut milk powder, not a miniature cupcake

For the pineapple centres: 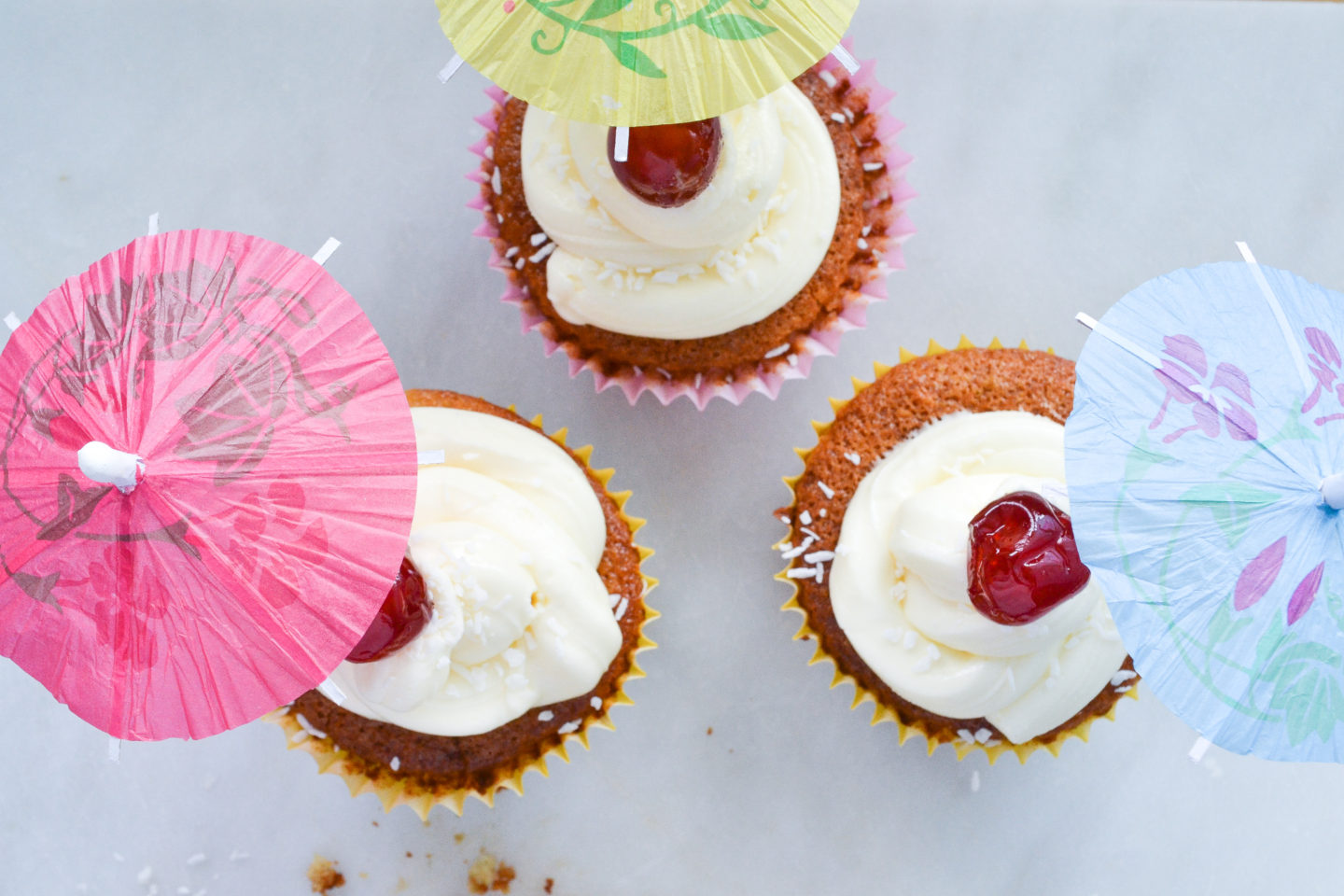 Start by preheating the oven to 180 degrees (160 for fan ovens) and lining a muffin tray with muffin cases.

Add the flour, sugar, coconut milk powder and baking powder to a large bowl and give it a good mix to break up any lumps. Add the oil and mix well. Gradually add the water, whisking away lumps as you go. Imagine it a bit like making a pancake batter.

Divide the batter evenly between your cake cases and cook for 20-25 minutes or until springy to the touch. Transfer onto a wire rack to cool.

While they cool down, you can make your filling and buttercream. For the pineapple filling drain the crushed pineapple well and mix in the jam. The jam is just to hold it together a bit. For the buttercream, just beat everything together. You might want to add the icing sugar gradually to blend it well, otherwise it can be tricky and you end up with a face full of sugar. You might find you need to be a bit flexible with the amounts – you’re basically looking for a firm, pale buttercream that holds its shape.

Once the cakes are cool, use a sharp knife to cut out the centre of each cake. It doesn’t have to be loads – maybe half an inch or so diameter, and it doesn’t have to go all the way through the cake. Spoon the pineapple mixture into each hole. Don’t worry about how neat it is or if it overflows the hole a bit as this will be covered up with the frosting. The pineapple will soak into the cake and make everything quite gooey, so just be warned that when you eat the cakes you might want a plate and a small fork!

Pipe on your Malibu buttercream, (or just transfer straight to your mouth with a spoon or your hand if you’re going for the ‘Golden Girls with the curtains drawn’ version of the recipe), sprinkle over a little desiccated coconut, top with a cherry and a paper umbrella. 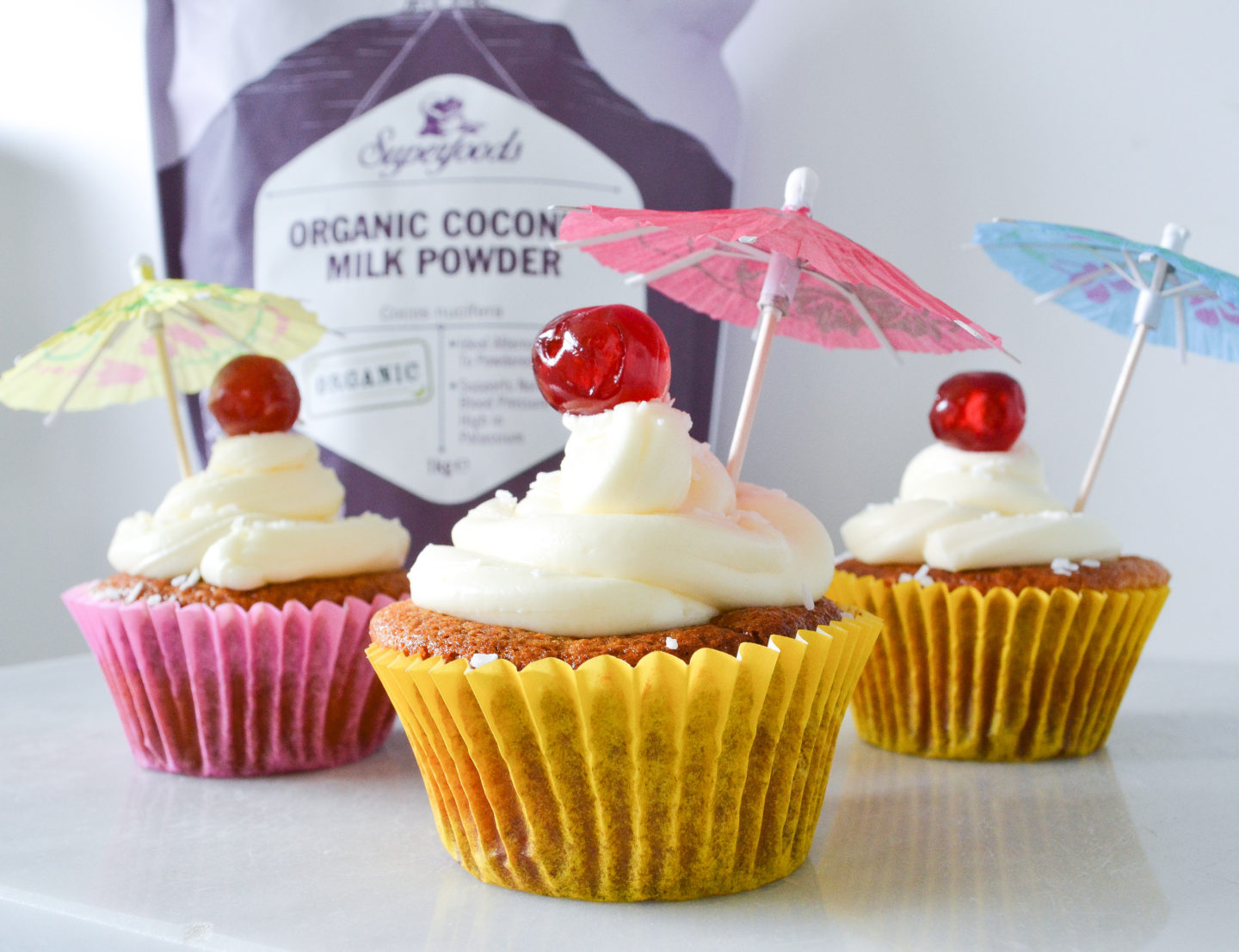 Not too shoddy are they? I have to be honest and say I was a bit nervous about the actual sponge (these were my second version) because I don’t tend to cook vegan cakes and I’d never cooked with coconut milk powder before, but the end result is not bad at all! The different textures and flavours combine really well, and the pineapple makes everything so wonderfully moist and delicious.

I’m not saying it’s exactly the same as being sat on a dessert island, sipping a piña colada, while a bronzed adonis type makes sure you’re evenly covered with sun block, (safety first), but on a scale with that at one end, and sitting in a shed in the rain swigging from a can of Lilt at the other, they score a strong seven.

Do check out Indigo Herbs for more recipe ideas and to see their whole range, and if you have a go at making my vegan piña colada cupcakes for yourself then leave a comment and let me know how you get on. Oh and if you liked these, you might like my vegan hot cross bun recipe too. That one was VERY satisfying to make.

What’s your favourite vegan cake recipe? Leave a comment and let me know!