As you know, I recently got engaged. You might not have noticed, perhaps I didn’t mention it? Oh no, hang on, I did. A MILLION TIMES.

I’ve actually had the ring on my finger for nearly a month now, I just didn’t tell the internet straight away as I wanted to milk the whole ‘face to face announcement’ thing. I wanted to be able to turn up at book group and shove my hand in people’s faces and have them be actually excited rather than just saying ‘oh yeah, I saw on Facebook’. That’s definitely not as much fun. 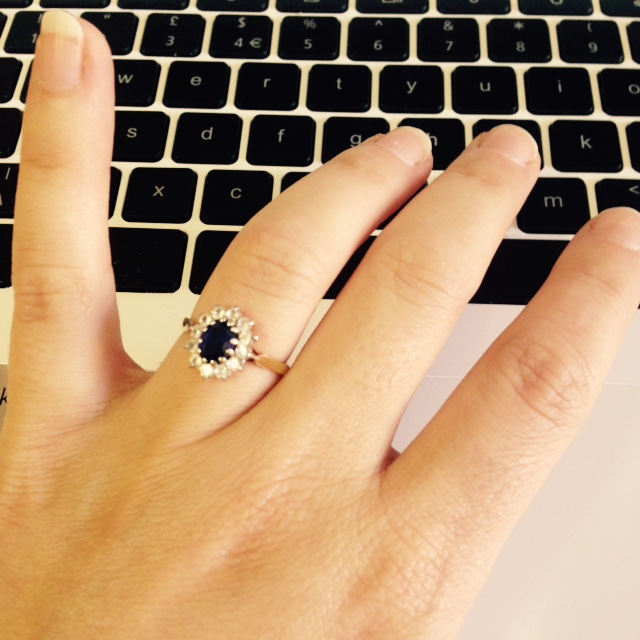 Oh whoops, how did that get there? I must have accidentally taken a picture of my own hand while typing this post.

So, a month in, and I have yet to have that moment where I refer to my ‘fiancé’ in a random conversation with a stranger OR on a blog post. Boyfriend is easy to say, but somehow I feel like fiancé doesn’t fit as casually into a sentence. Especially as I know I would put way to much emphasis on the last syllable and end up just sounding a bit of a knob.

‘Oh yes, my fiancé was just saying the other day darling…’

You see? Is that just me or does it sound crap?

I fear I have turned it into a thing in my head – fiancé is just a word – so today I am staring awkwardness right in the face and calling its bluff by turning what should be a non-issue into an entire blog post. That will teach it.

I have set myself the challenge in fact of using the word fiancé at least 10 times in this post, until it either starts to feel normal or loses all meaning, as words do when you say them over and over.

See. It doesn’t even sound like a word now does it?

From now on though I am going to call him my fiancé every time I mention him in a post and you have to not laugh.