I received my first ever proposal when I was ten years old from a boy in my class called Richard Gibson. In our school we had these white plastic 30cm rulers that were ideal for passing messages on; you could write on the back with pencil and rub it out when you were done, then when you wanted to pass a note to someone it jut looked like you were helpfully passing them a ruler.

One day I had a ruler passed to me from Richard Gibson.

“Will you marry me?” it said in pencil on the back.

I wrote back. “Which school?” At ten, your choice of secondary school was a life defining thing.

“Huish Episcopi,” I wrote back, “sorry.”

And that was that.

I then went through a bit of a dry spell proposal wise, a 27 year dry spell in fact, which was broken on my birthday in April this year when I received my second ever marriage proposal.

This one was done out loud, rather than on the back of a ruler, and this time I wasn’t about to set off to secondary school and so I was able to say yes.

I’m not going to tell a big long story about it, because it’s private and special and I want to keep it like that, but I will show off my beautiful ring, which I love because it makes me feel like a princess: 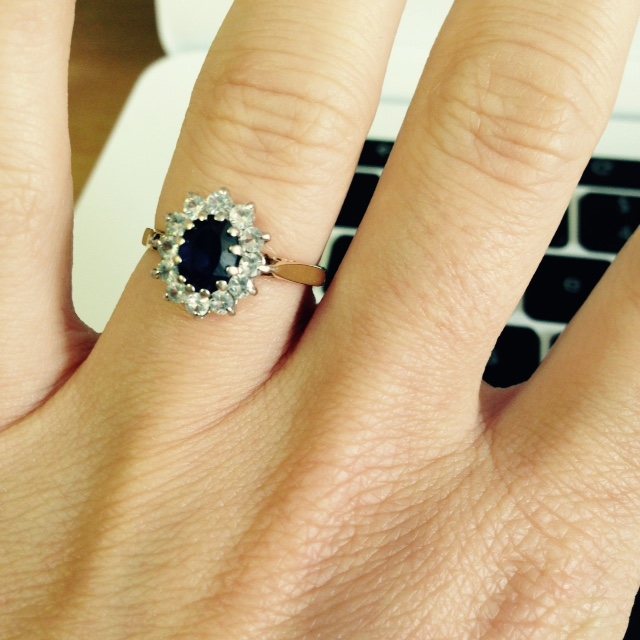 Apparently I have started walking around with my hand held aloft, as though waiting for a kiss on the hand, just to make sure everybody sees it.

Some friends have seemed surprised.

“That’s great,” was the response at book group, conversation moving on for five minutes. “Hang on,” piped up one member, “does that mean you’re actually going to get married?!”

“Er yes,” I said, “isn’t that what it means?” A more appropriate level of excitement then ensued.

I can’t say I blame them for being surprised, getting married has never been high on my list of things to do, and yet it feels completely right and perfect.

And so there we are. I make no apologies for the fact that I will soon be introducing a ‘wedding’ category and boring you with cake and flower options, and no, I will not be changing the blog name, I have a brand here guys, come on.

Suffice to say that I am very happy and excited, and look forward to sharing my thoughts with you on all things marriage, like a proper grown up lady.