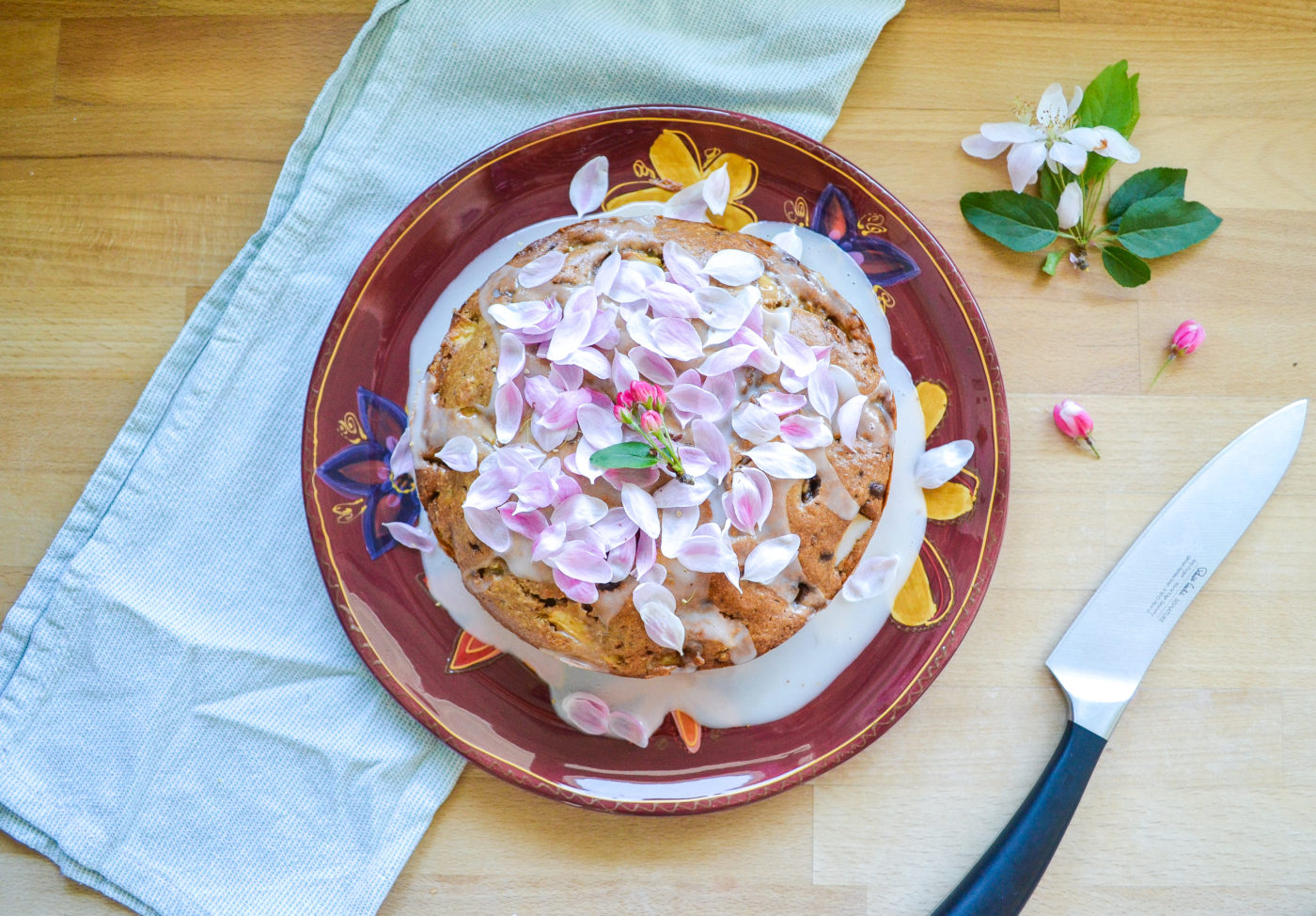 Up your pandemic baking game with this easy apple cake recipe

What is it about a global pandemic that means everyone rushes to make banana bread? I keep seeing memes about it on social media and I’m just as guilty of it, although in my defence I make a lot of banana bread virus or no virus, just because I buy bananas with good intentions but have never quite learned the habit of choosing fruit over Wotsits.

Overripe bananas are my nemesis.

I thought I’d push myself outside of my pandemic comfort zone this weekend though, and have a go instead at an apple cake. I know right? SHOCK HORROR, talk about living life on the edge, it doesn’t get much more daring than this does it? This apple cake recipe comes from a book called Botanical Baking, which is full of beautiful recipes using edible flowers. It’s very Millenial Instagram user.

I’m confined to the house at the moment – halfway through 14 days of self-isolation – so I can’t exactly go foraging for edible flowers, but we do have a small apple tree in our garden, which grew from a pip that Belle planted when she was about two years old, so I thought I’d try my hand at the apple blossom cake. 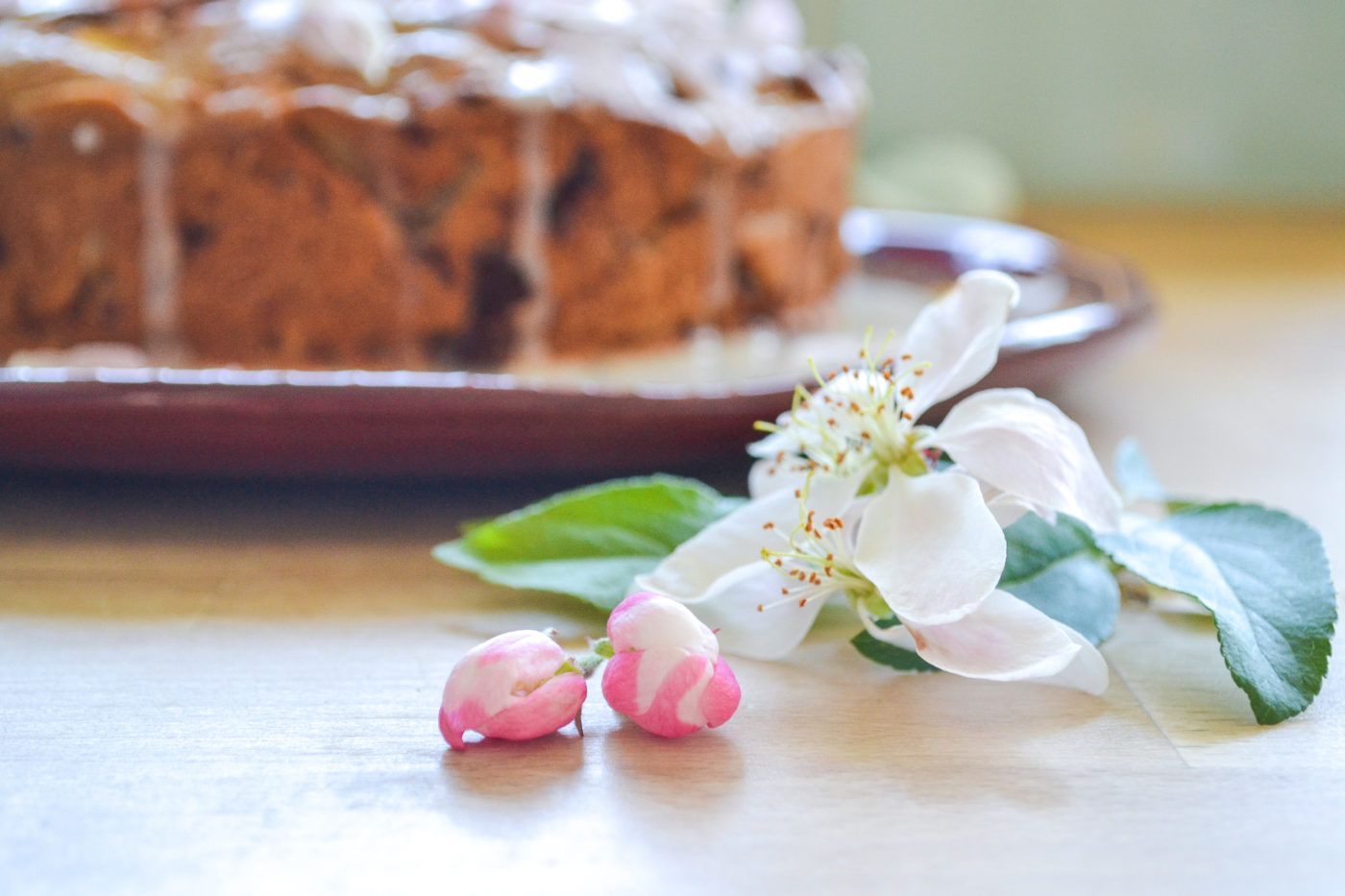 I really love the idea of incorporating nature into your baking – there’s something so wholesome about the idea of just going outside and picking something alive and growing and being able to turn it into something else, something edible. My mum has a lot of fruit bushes and trees near her house and I love picking big bowlfuls of fruit in the autumn and turning it into pies and crumbles.

Botanical Baking has loads of information about all of the flowers that are completely edible – spoiler alert: it’s way more than I realised. I pretty much just thought you could chuck some nasturtiums into a salad and that was that.

Apparently apple blossom has an apple flavour with a hint of honeysuckle. I wasn’t convinced I could taste anything much other than ‘petal’, but they look so pretty don’t they? (Don’t eat the stalky bits, that was just for garnish as the buds were such a beautiful shade of pink.) 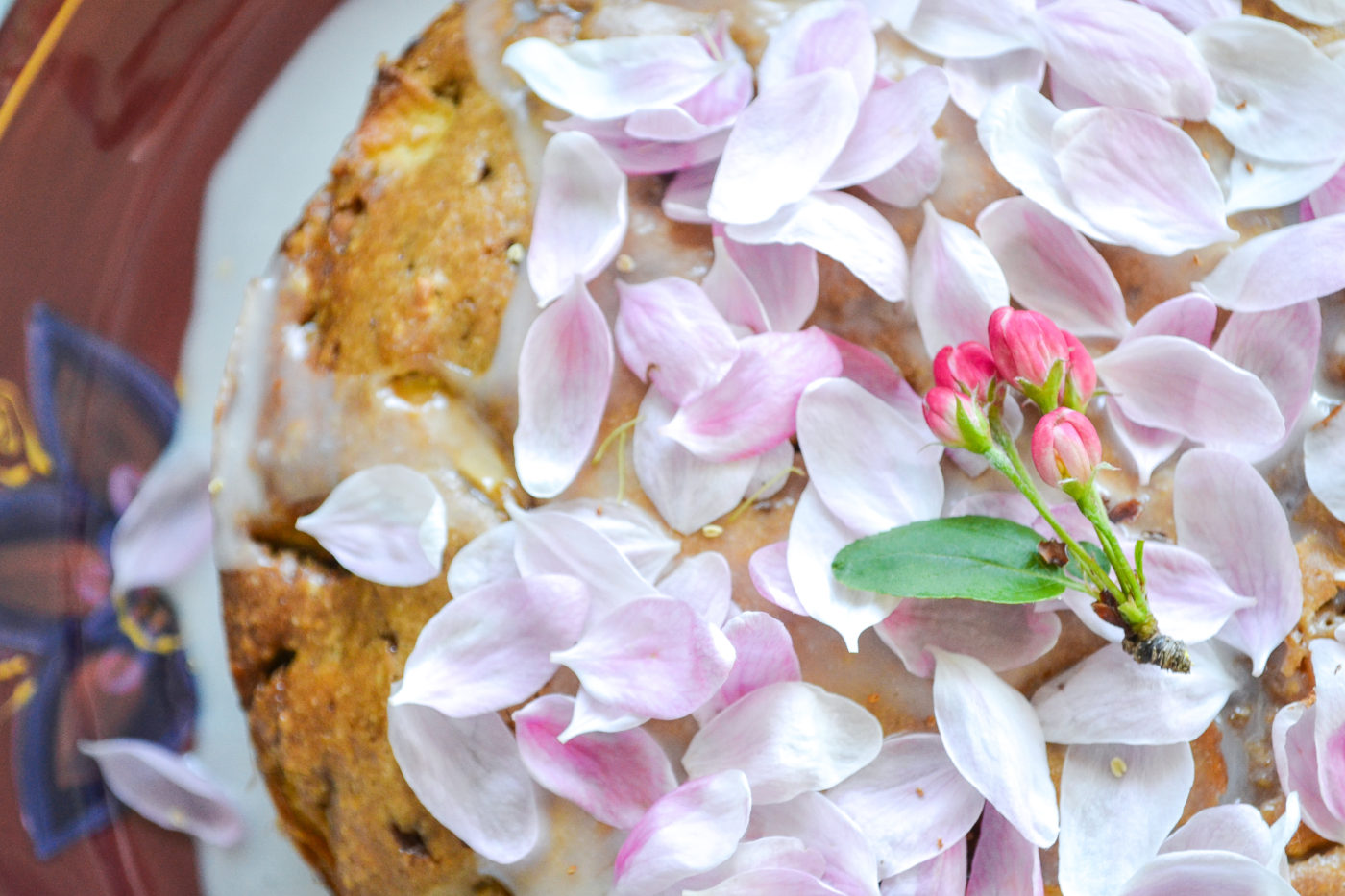 To make this apple cake recipe you will need:

The recipe calls for a 2lb loaf tin, which I didn’t realise until I’d already made the mixture. I only have a 1lb loaf tin so I had to go with a round cake tin instead, which worked fine. The recipe would be easy to half though if you wanted to make a smaller loaf. 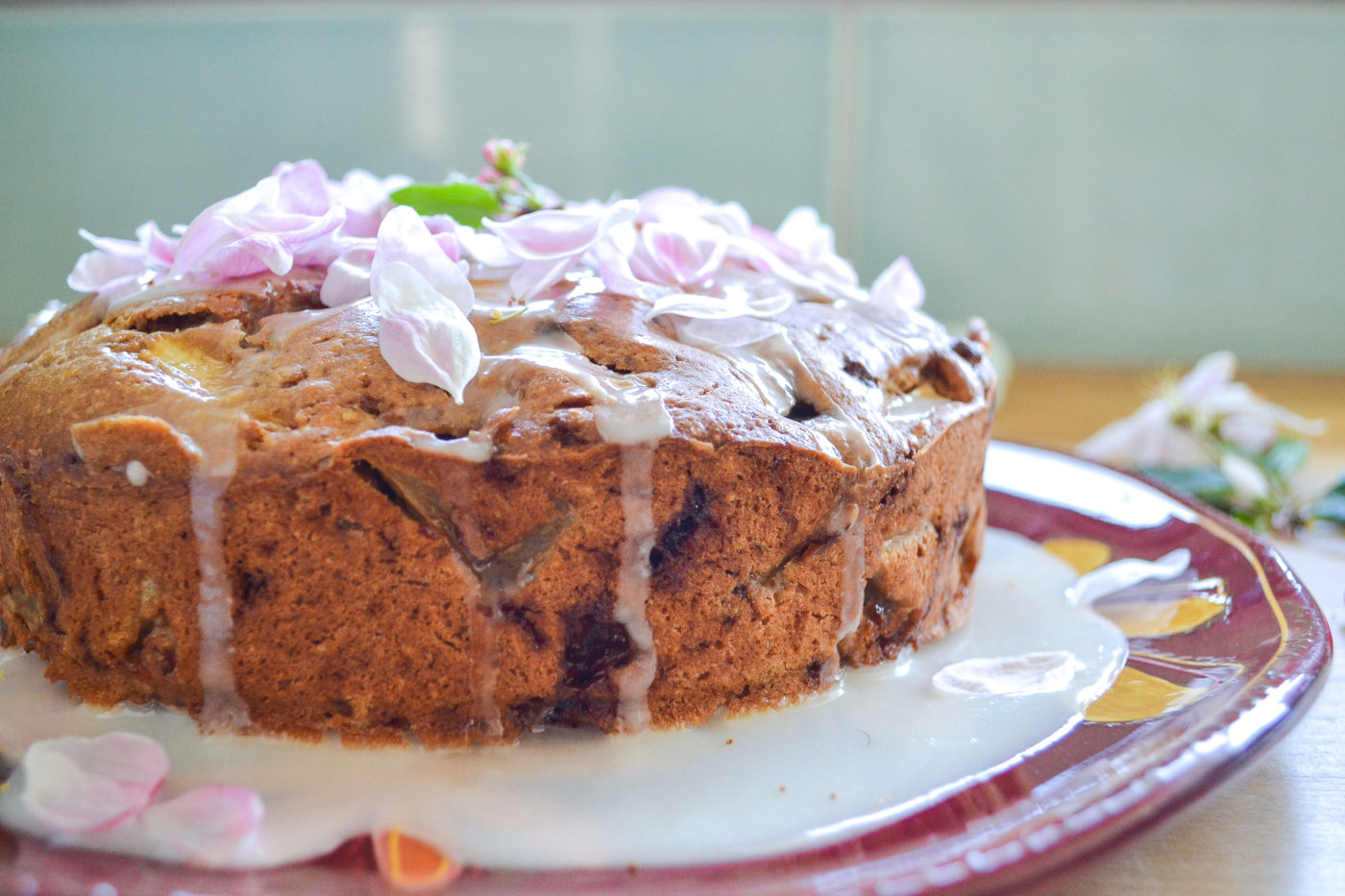 Start by rubbing the butter into the flour until you have a breadcrumb consistency. As I did this I thought about my old home ec teacher Miss Prince. She was quite scary, but the stuff I learnt in my home ec GCSE has proven way more useful than most of my subjects. (Has anyone ever even seen an ox-bow lake?) I’ve always been able to make a decent white sauce thanks to Miss Prince, although I do have a very strong memory of her criticising my jacket potato filling, saying my red pepper chunks were too big and that I’d get indigestion.

Next add the sugar and ground ginger and mix well. Muscovado sugar can be quite chunky, so break it up as best you can with your fingers. Don’t worry if you have a few lumps as these melt into nice toffee type bits in the cake.

Peel and chop the apple into small chunks and add to the dry mixture. (I typed ‘onions’ instead of ‘apples’ when I first wrote that. Don’t use onions, that would not be a fun cake.)

Beat the eggs and vanilla in a separate bowl and then add to the dry ingredients and mix well. Mine didn’t feel like it had enough liquid to start with but stick with it, it does come together.

Pop the mixture into your greased tin and bake for 45-60 minutes at 170 degrees. I did mine for about 50 minutes and although my skewer seemed to come out clean, I’d say it could have handled a bit longer as the inside was a tad squishy in places, so just be aware. Leave to cool on a wire rack.

Once your cake is completely cool, you can ice and decorate it. Pop the icing sugar in a bowl and add the apple juice VERY gradually until you have a nice pouring consistency. Cover the cake and then add your apple blossom. P

If you liked this apple cake recipe, why not have a go at my gluten free cherry clafoutis or peach and raspberry bread and butter pudding? 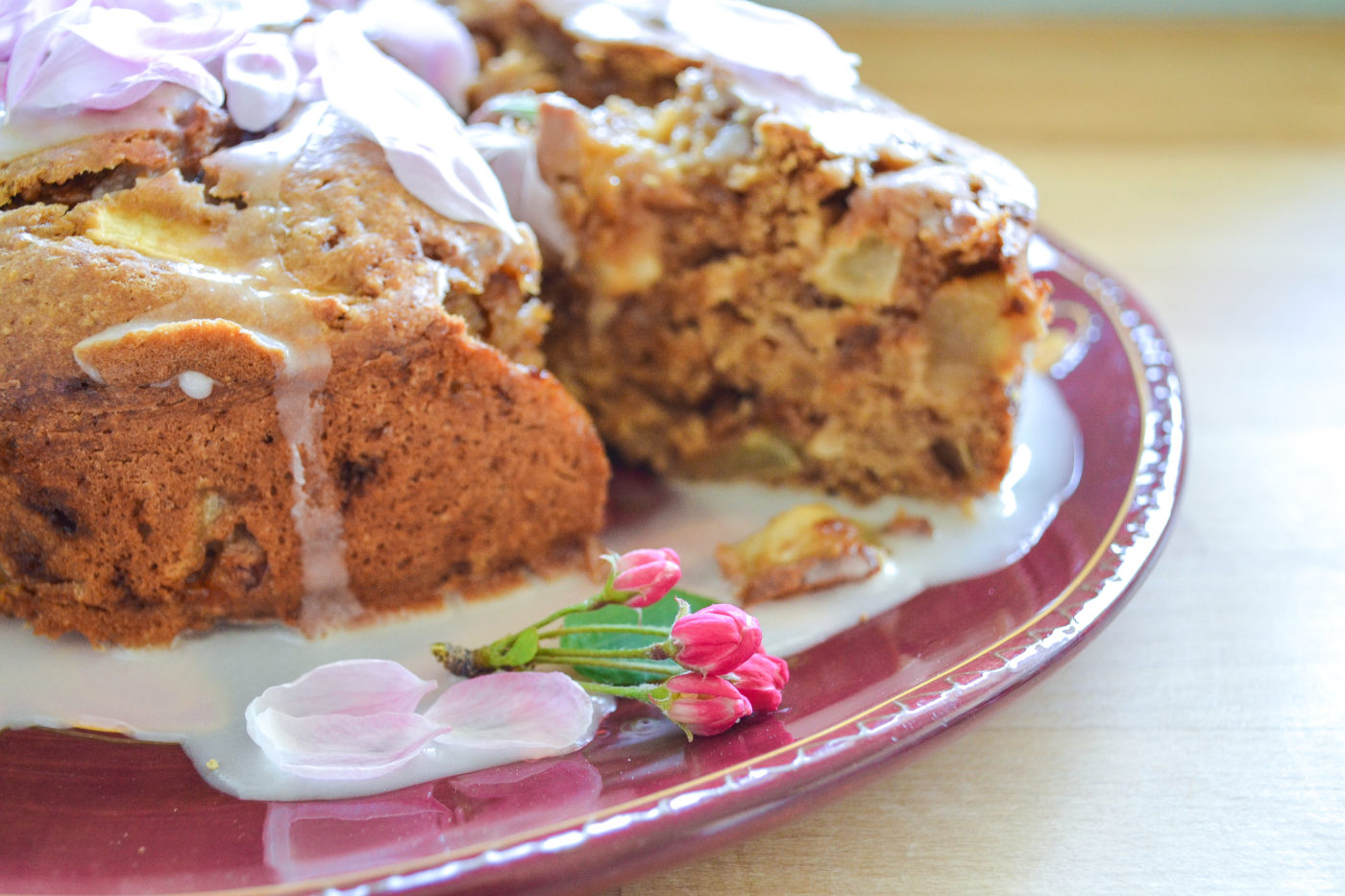 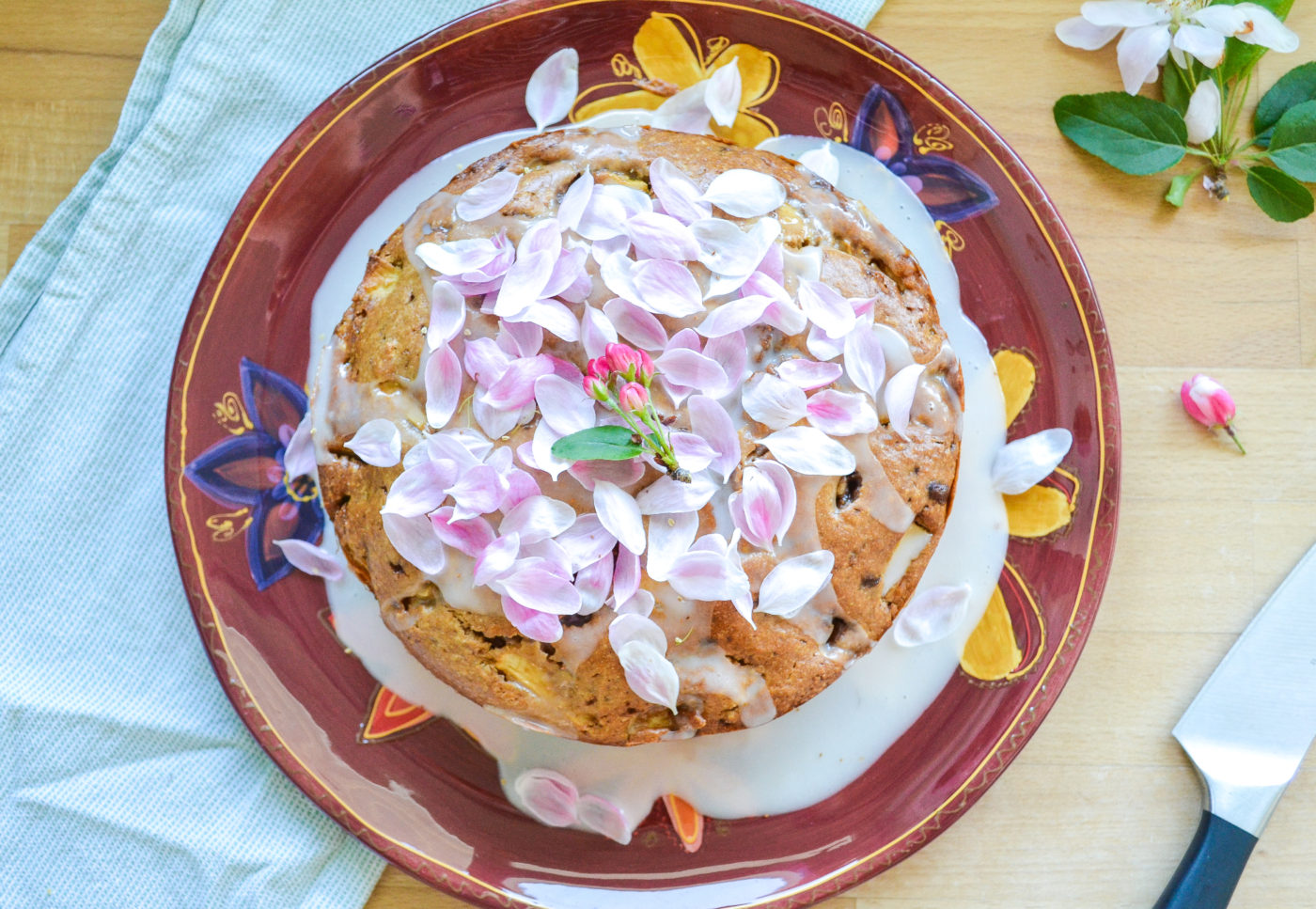