A couple of weekends ago I took Belle for brunch at Kitchen at Jordans Courtyard. We ate banana bread, we played cards, we secretly watched a little boy with an adorable bowl cut eat pizza – it was a good day.

I’m a big fan of the original Kitchen at The Wharf in Langport, not least because if I get lucky I can sit at my old kitchen table, which found a new home there after I realised I couldn’t open my back door properly with it in my own house. (It’s a round one with white painted legs and a bare wooden top, should you fancy visiting it.) To be honest I prefer the eclectic, mismatched decor and the cosy atmosphere of Kitchen in Langport, but Belle likes it when things are a bit more in order, and so she prefers the new version of Kitchen at Jordans Kitchen.

They’re essentially both nice though.

(Year 5 level review for you there. Honestly, I should consider writing for a living.)

What’s especially nice about them both is the food. Their menus change with the seasons and they source as much of their fresh produce as possible from local suppliers. They also run their own artisan bakery in Langport, so they really are all about quality ingredients and cooking from scratch.

I browsed the menu at Jordans Courtyard while Belle practiced shuffling cards. She was trying to master the thing where you split the pack and sort of flick the two halves together, whilst trying to look casual and cool. A well-shuffled pack is very important for a serious game of Go Fish.

It took me a long time to decide because basically I wanted everything. I was especially drawn to the toasted banana bread with granola and yogurt because that’s not something I’ve ever seen on a brunch menu before, but also I wanted the big breakfast because FRIED POTATO ROSTI. Any kind of fried potato item on a brunch menu is normally a clincher for me. I think it’s because fried potatoes always remind me of my Dad, being small and dipping bits of crispy potato in tomato ketchup. They’re such a treat aren’t they?

We decided to go with a bit of a joint effort and get the full breakfast to share, with homemade baked beans and sourdough toast, and then the banana bread as a joint pudding. The breakfast would actually have been enough between us as it was really filling. A split breakfast works well for us as I don’t really like bacon and Belle doesn’t like sausage or black pudding. (I bloody love black pudding.) 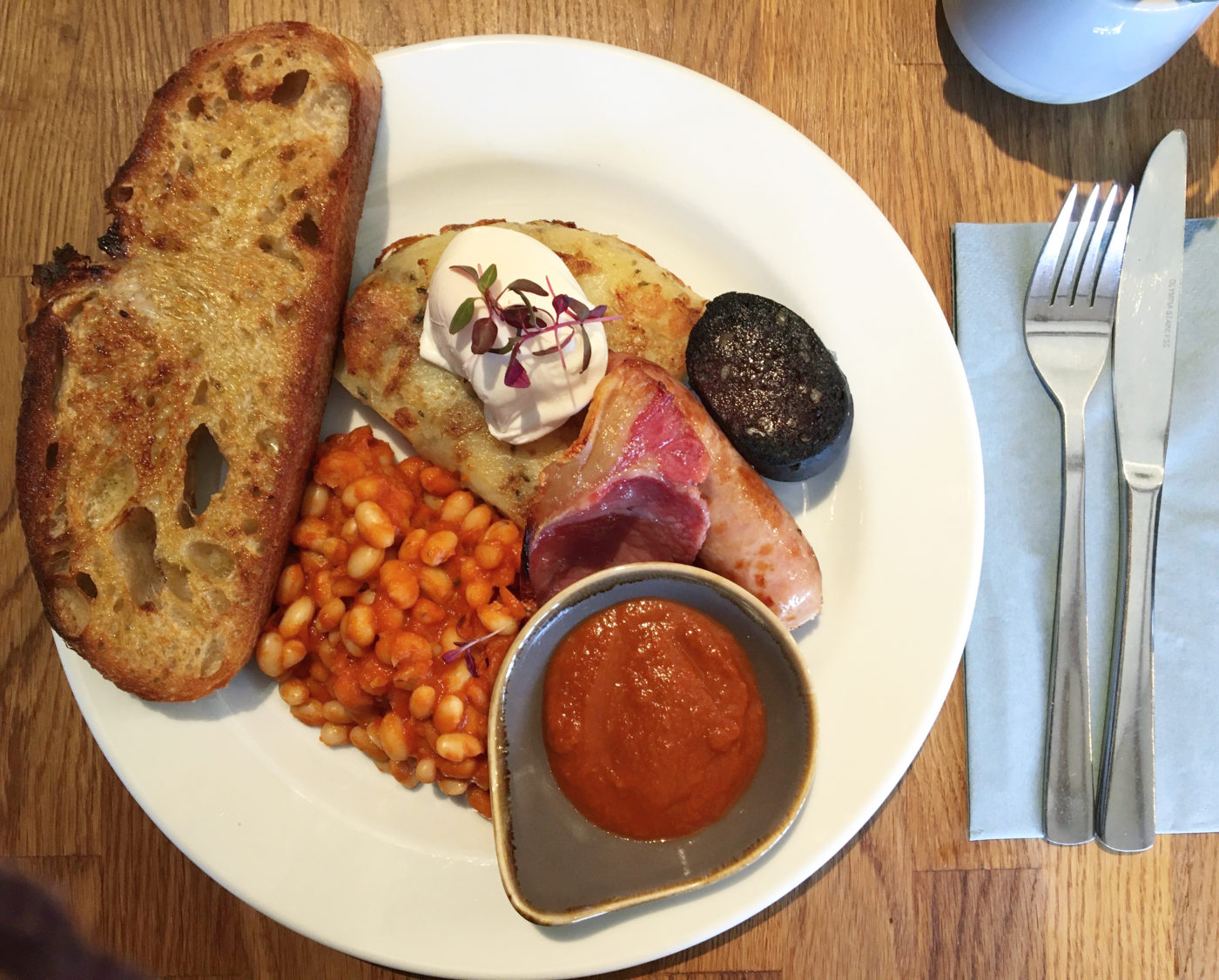 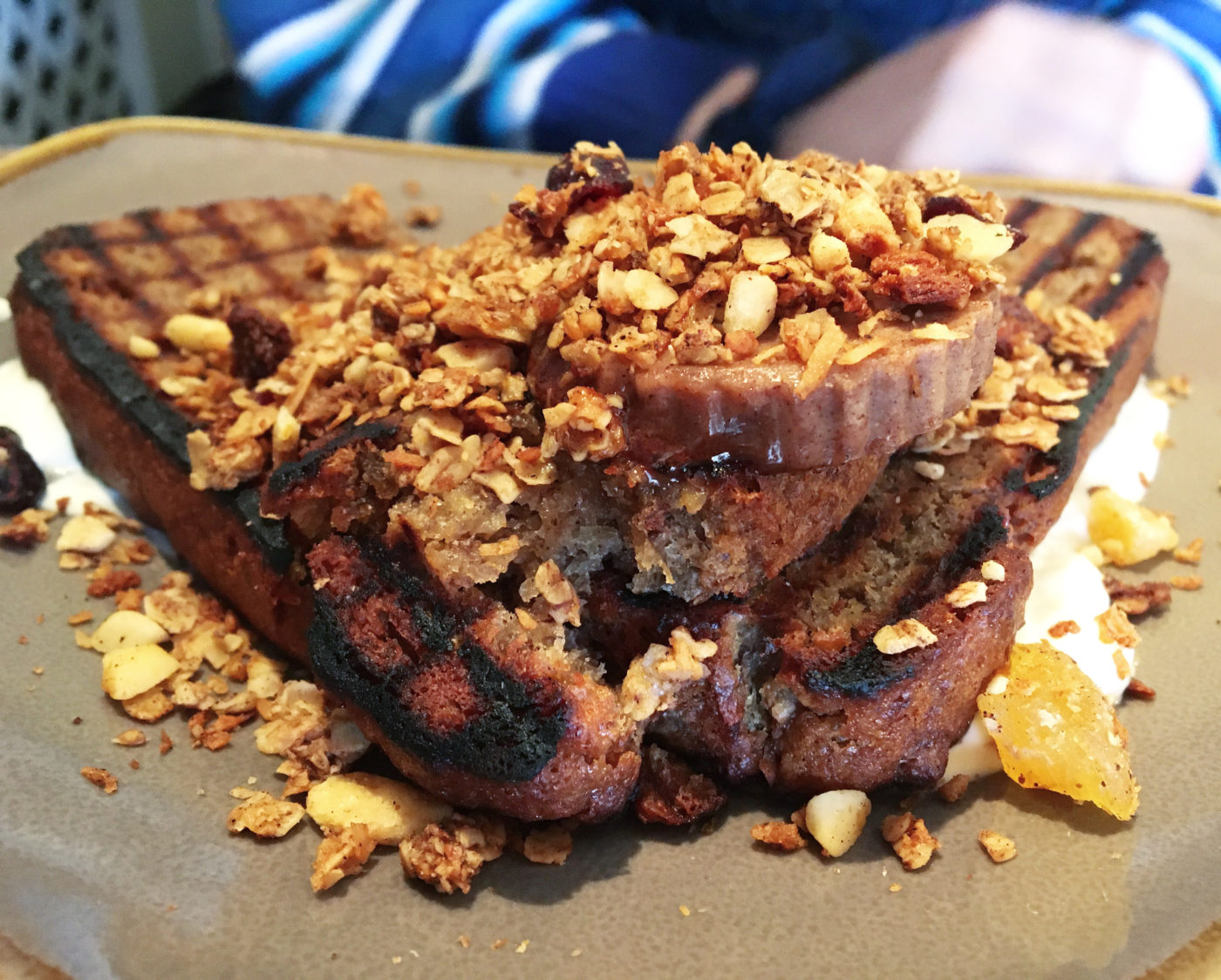 So full of potato were we that we didn’t manage to get through all of the banana bread, but it WAS delicious. It was so delicious in fact that I thought I’d have a go at making it myself as I have a really easy banana bread recipe and always have overripe bananas lying around.

I don’t know what it is about bananas, they just feel like the kind of thing I SHOULD buy every time I go shopping, even though I don’t actually like them that much. (I like them in cake obviously). 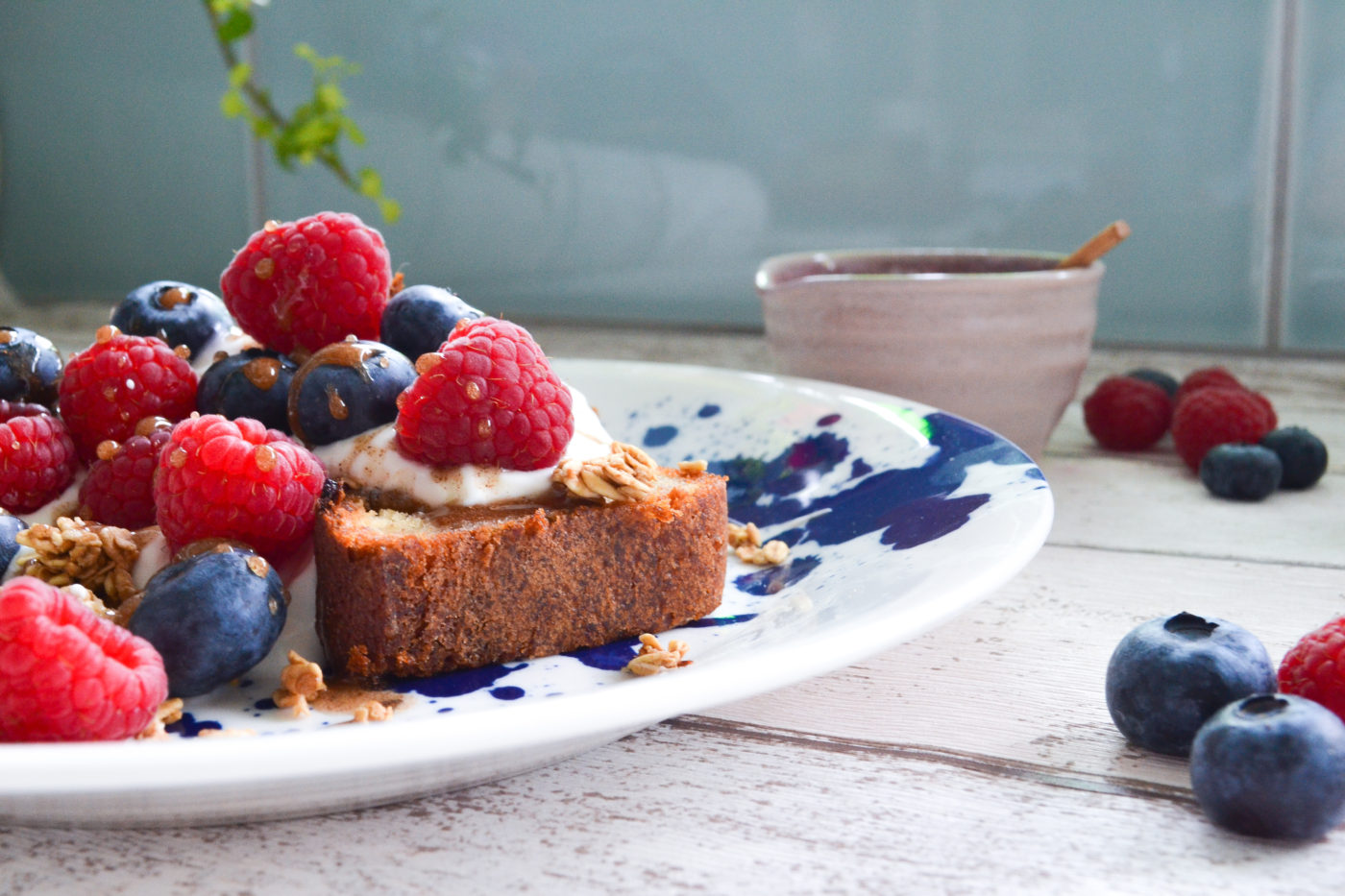 This is my version

How to make easy banana bread

To create your own toasted banana bread brunch sensation you’ll first need to make the banana bread. You could do this the day before if you want, perhaps you have some leftover* or maybe, like me, you have a few hours in the morning before you really fancy eating anyway and so can make it first thing.

To make my easy banana bread loaf, whisk together 140g each of soft margarine, caster sugar and self-raising flour, along with 2 eggs, a teaspoon of baking powder and a splosh of vanilla essence. Mix in 2-3 overripe bananas, mashed. Transfer into a greased loaf tin and cook at 180 degrees for about 40 minutes or until a skewer comes out clean. 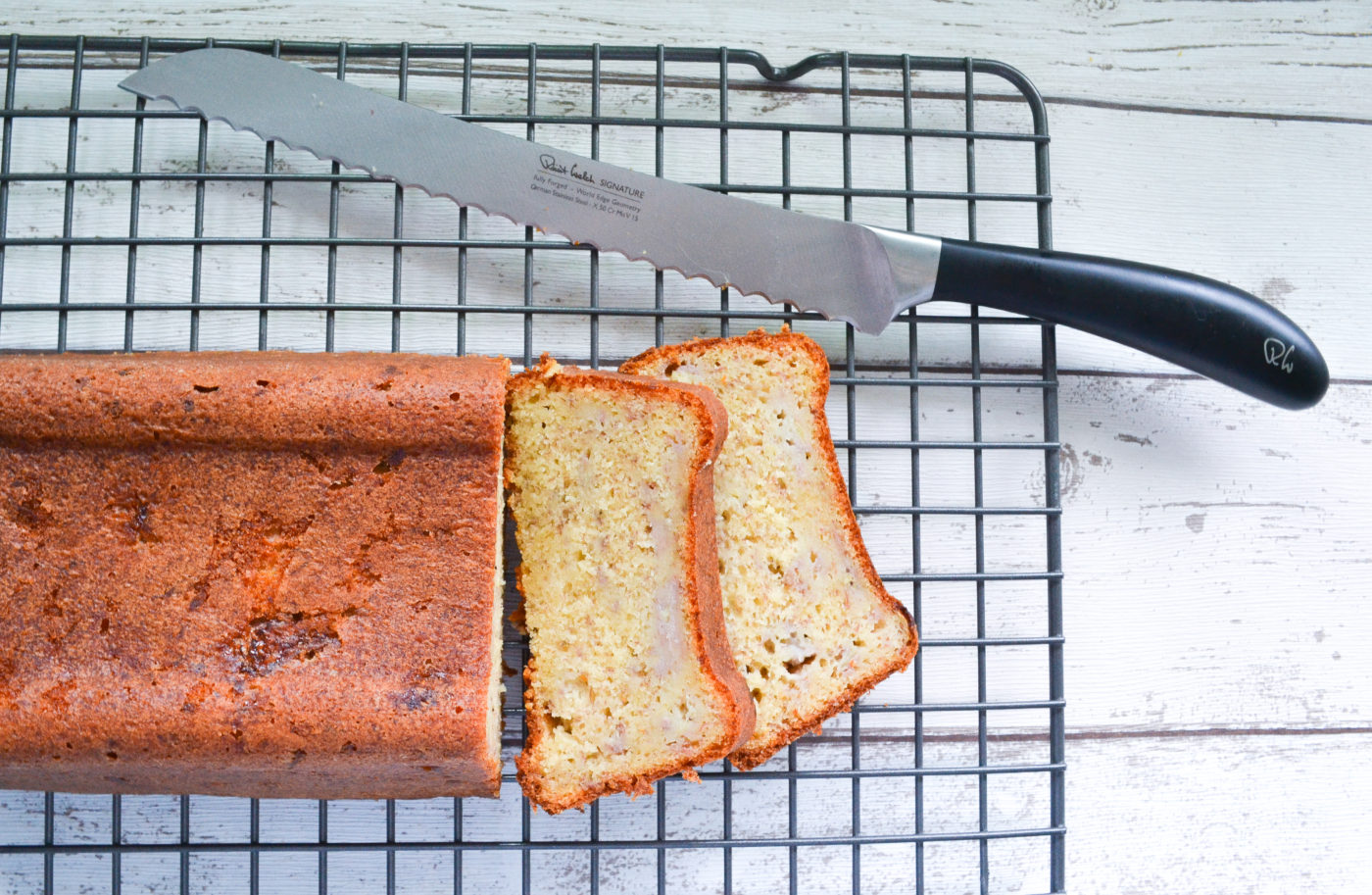 I told you it was easy.

To put together a brunch that Kitchen at Jordans Courtyard would be proud of, lightly toast a couple of slices of your homemade banana bread and sprinkle liberally with granola and natural yogurt. The one at Kitchen had quite a strong cinnamon vibe and some kind of sauce – I think perhaps cinnamon butter? – but I just went with mixing some honey with cinnamon to drizzle over the top. It wasn’t quite the same but it was close enough.

I also added some fresh fruit so as not to feel quite so much like I was just eating cake and honey for brunch, although basically I was. Oh well. YOLO etc etc.

I’m not going to say it was 100% as good as the one at Kitchen – their’s was warmer and moister than mine, and there’s something about someone else making food for you that always makes it tastier – but it was pretty good. Plus now I have three quarters of a banana loaf to ‘use up’ over the next few days.

Life is such a CHORE sometimes isn’t it?

Would you choose this on a brunch menu? Are you normally a sweet or savoury bruncher? 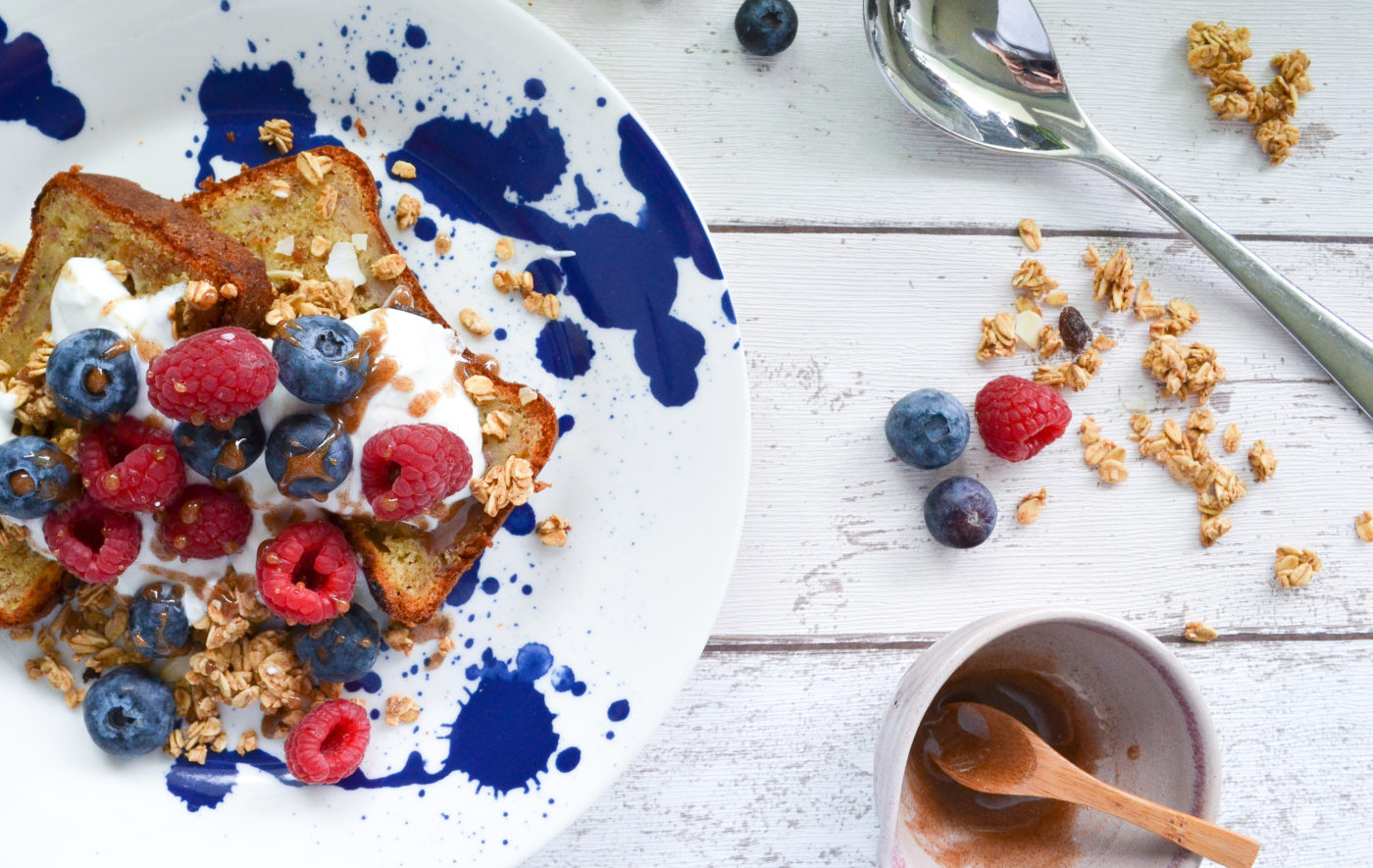 *I’ve heard that leftover cake does happen to some people.