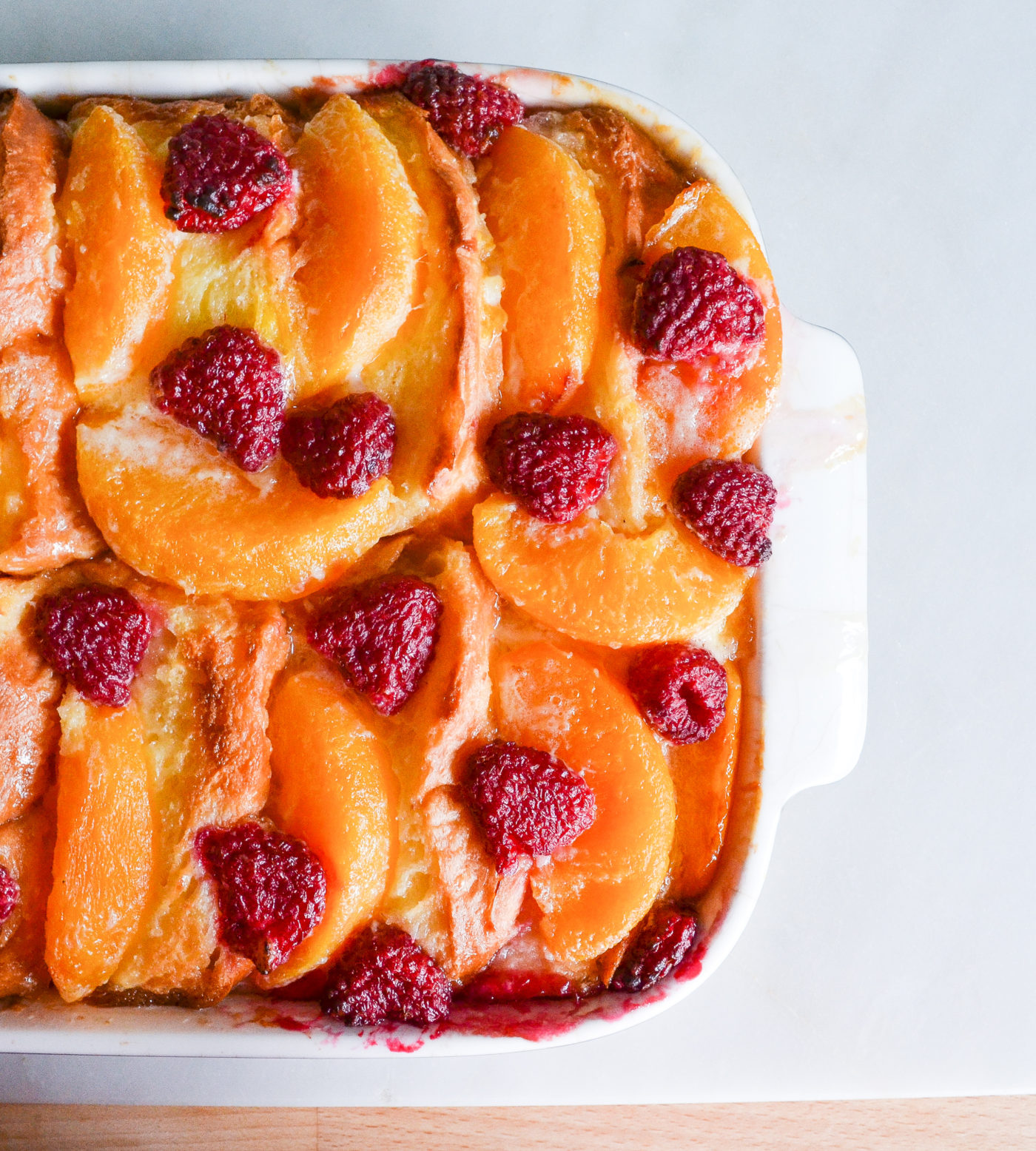 If you ever find yourself wanting to impress a group of new friends I can recommend doing it through the medium of bread pudding.

I first made a variant of this bread pudding recipe on a writing course about a year and a half ago and I don’t think I’d be exaggerating if I said that for most people it was the highlight of the week. Okay, I’m exaggerating a bit, but it was VERY good. The bread soaks up the custard and something happens that I think must be actual magic – it’s moist and sweet and tastes of heaven.

The original version doesn’t have any fruit, and goes in a lot heavier on the sugar and butter topping, but as I was trying to create a reduced sugar bread pudding I cut back on this and added peaches and raspberries for sweetness instead. I think it’s better than the original, if that’s even possible. 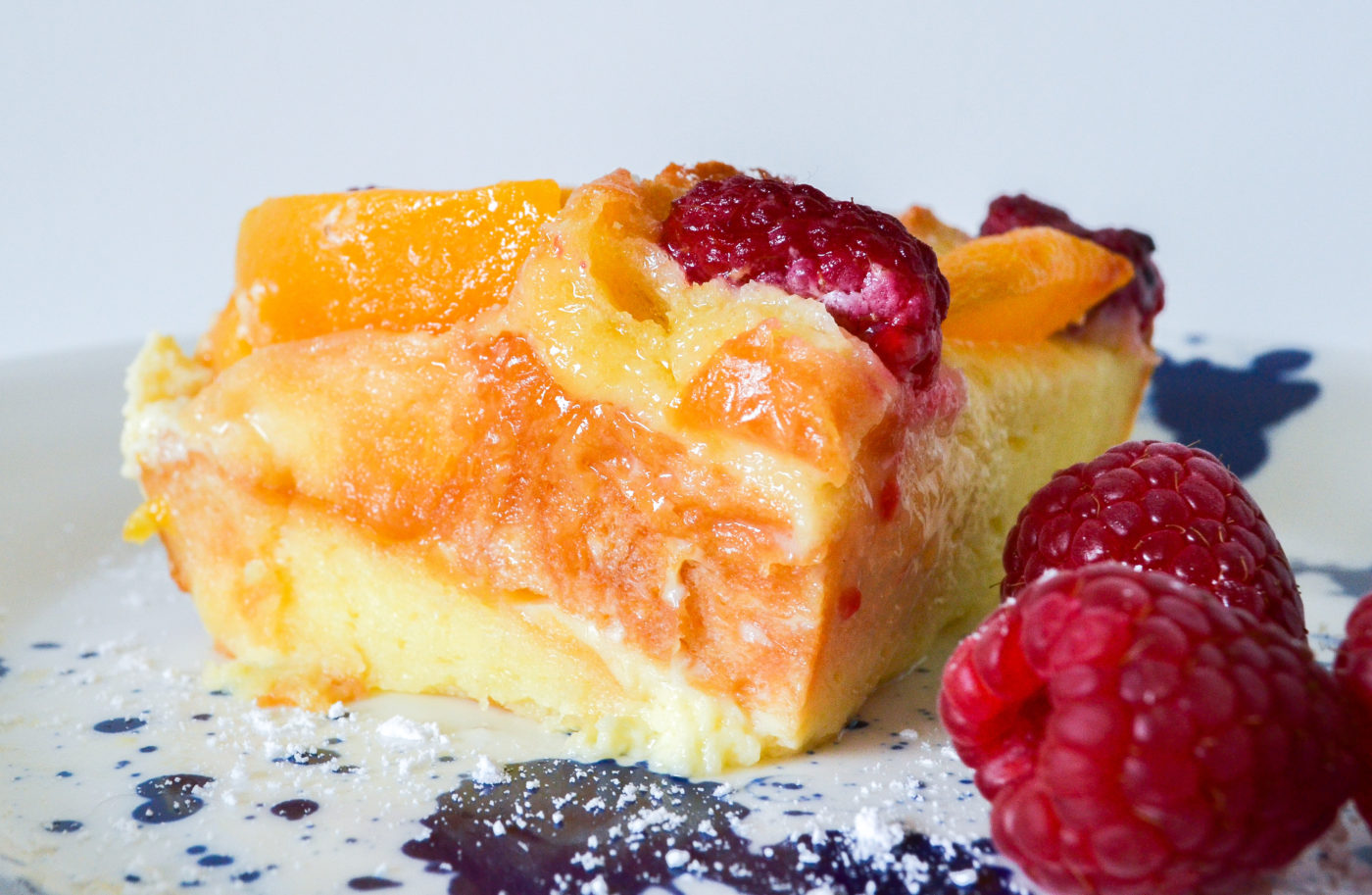 I also switched the caster sugar in my bread pudding recipe for xylitol powder from Indigo Nutrition. Indigo Nutrition is local to me in Glastonbury and I’m a big fan – remember I used their coconut powder last year to make vegan pina colada cupcakes?

Xylitol sounds a bit chemically I know, (I think it’s the X), but it’s actually a naturally occurring sugar alcohol found in fruits and vegetables, originally derived from birch tree bark. It has 40% fewer calories than sugar and a very low Glycaemic Index (GI) – only 7, compared to regular sugar which is 60-70. Xylitol powder contains no fructose so it has a negligible effect on blood sugar and insulin.

It would be fair to say I was cautious before I tried it, as some sugar alternatives can be quite icky tasting, but it doesn’t have any kind of artificial tang or aftertaste, just a very natural tasting sweetness. I gave some of the finished bread pudding to Belle without telling her I’d switched out the sugar and she said she would never have known.

It’s a similar texture to icing sugar, so especially good for things like butter icing or sweet pastry. Use the same quantity as you would sugar in any recipe. 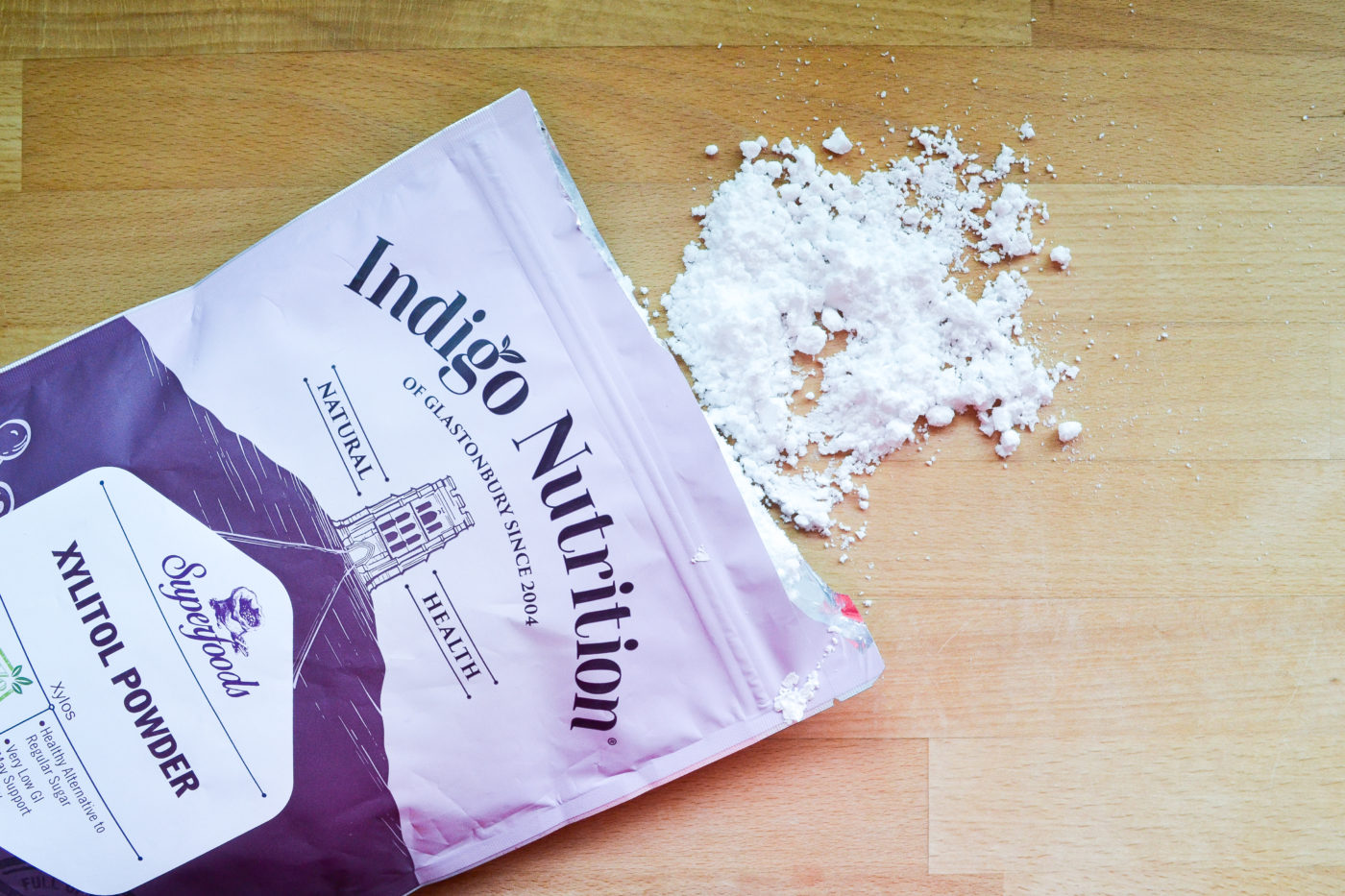 A lot of the bread pudding recipes I’ve seen involve heating the custard beforehand, but the great thing about this recipe is that it’s super low key – all the custard ingredients just get whisked up together, no heating required.

It’s amazing served warm from the oven, ideally with a splash of cream, but it’s delicious cold too, eaten the next day, standing at the door of the fridge with a fork, hoping that no one sees. 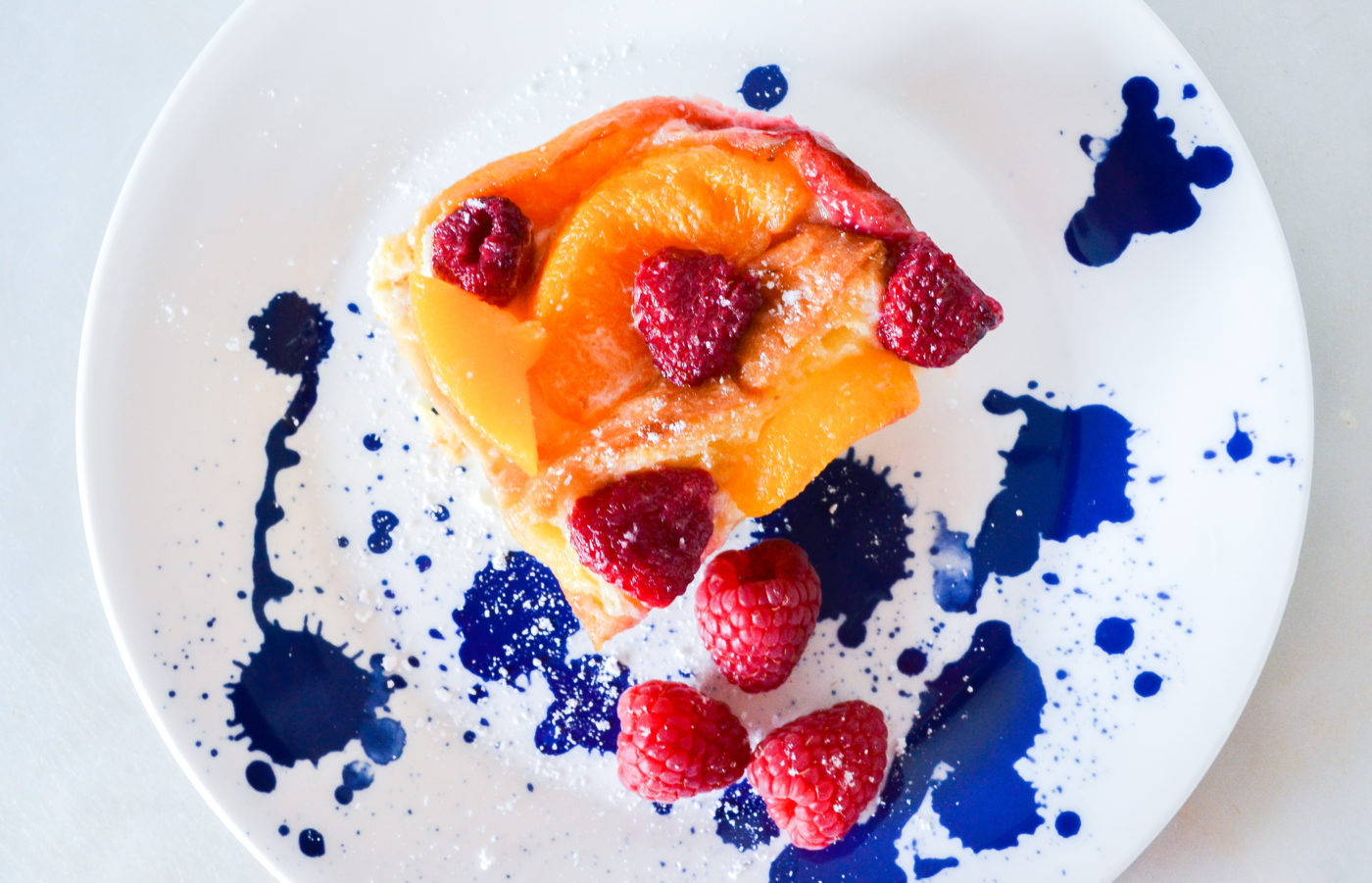 This peach and raspberry bread pudding recipe would serve 6-8 people comfortably. (Fewer if you want to do the fridge thing the next day.) 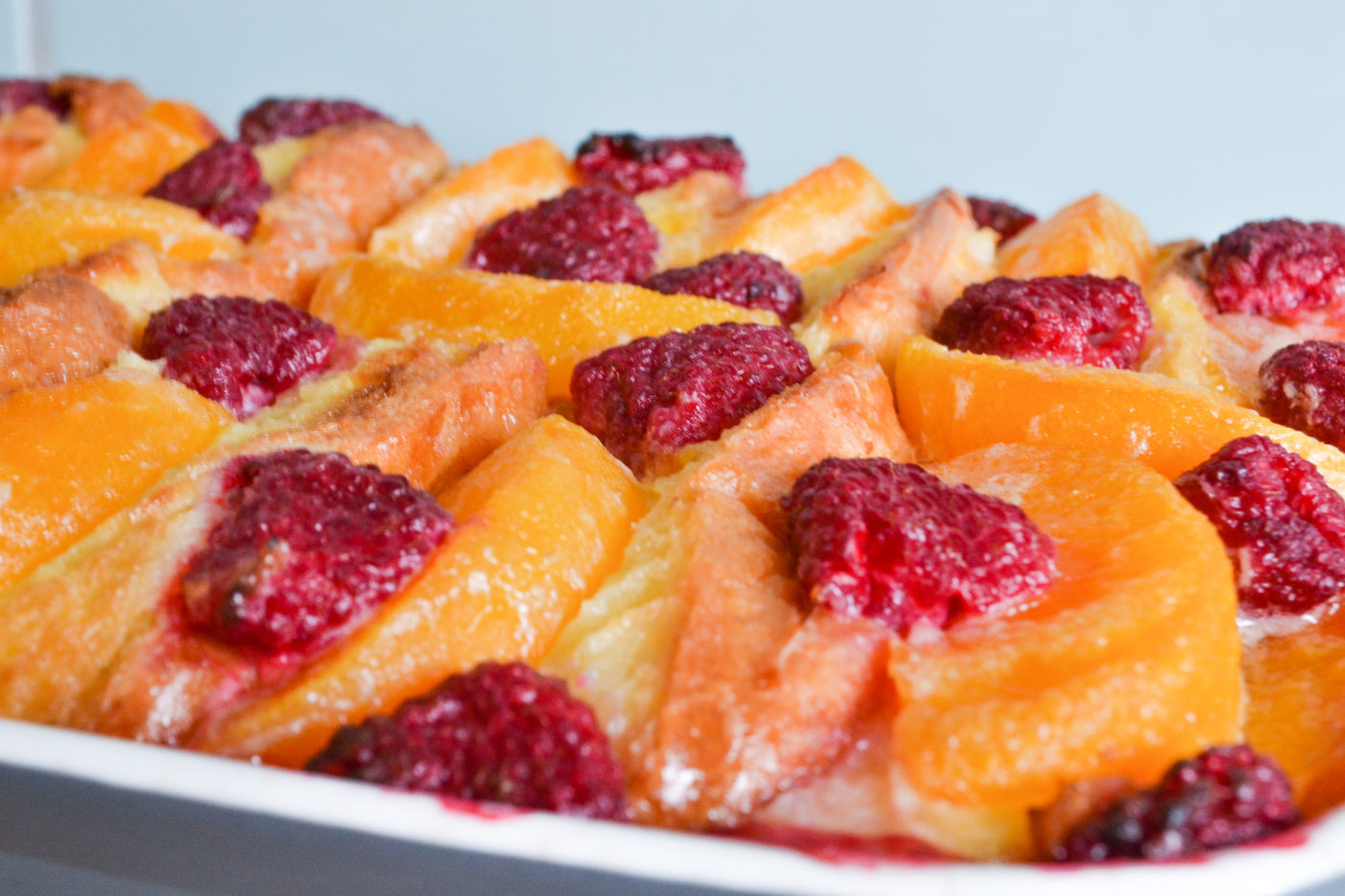 Start by preheating the oven to 180 degrees and greasing a medium sized baking dish with a little butter. Lay out your slices of brioche loaf, overlapping them until the dish is full. You can tear them into pieces if you prefer, whatever works for you. Arrange the drained peach slices and raspberries over the top. You could use fresh peaches, but I’m a big fan of tinned fruit and think peaches work especially well from a tin in terms of texture and flavour. (I used them in my slippy peach pancakes here.)

Beat the eggs and then add the cream, milk and 125g of xylitol powder. Whisk until smooth. This is your custard. (I told you it was easy.) Pour the custard slowly and evenly over the bread and fruit. Use something like the base of a small saucepan to gently push everything down so that the custard covers everything.

Mix together the topping ingredients – 50g of xylitol powder and 50g of soft butter – to form a butter icing consistency and dot this all over the top of your bread pudding.

If you’re preparing your bread pudding in advance you can now cover and leave in the fridge for a few hours, or pop it straight in the oven. It should take around 35-45 minutes. You want the custard to be set with a gentle wobble and the top to be turning golden brown.

Serve immediately with cream and a massive smile on your face as you watch all your new friends fall in love with you. 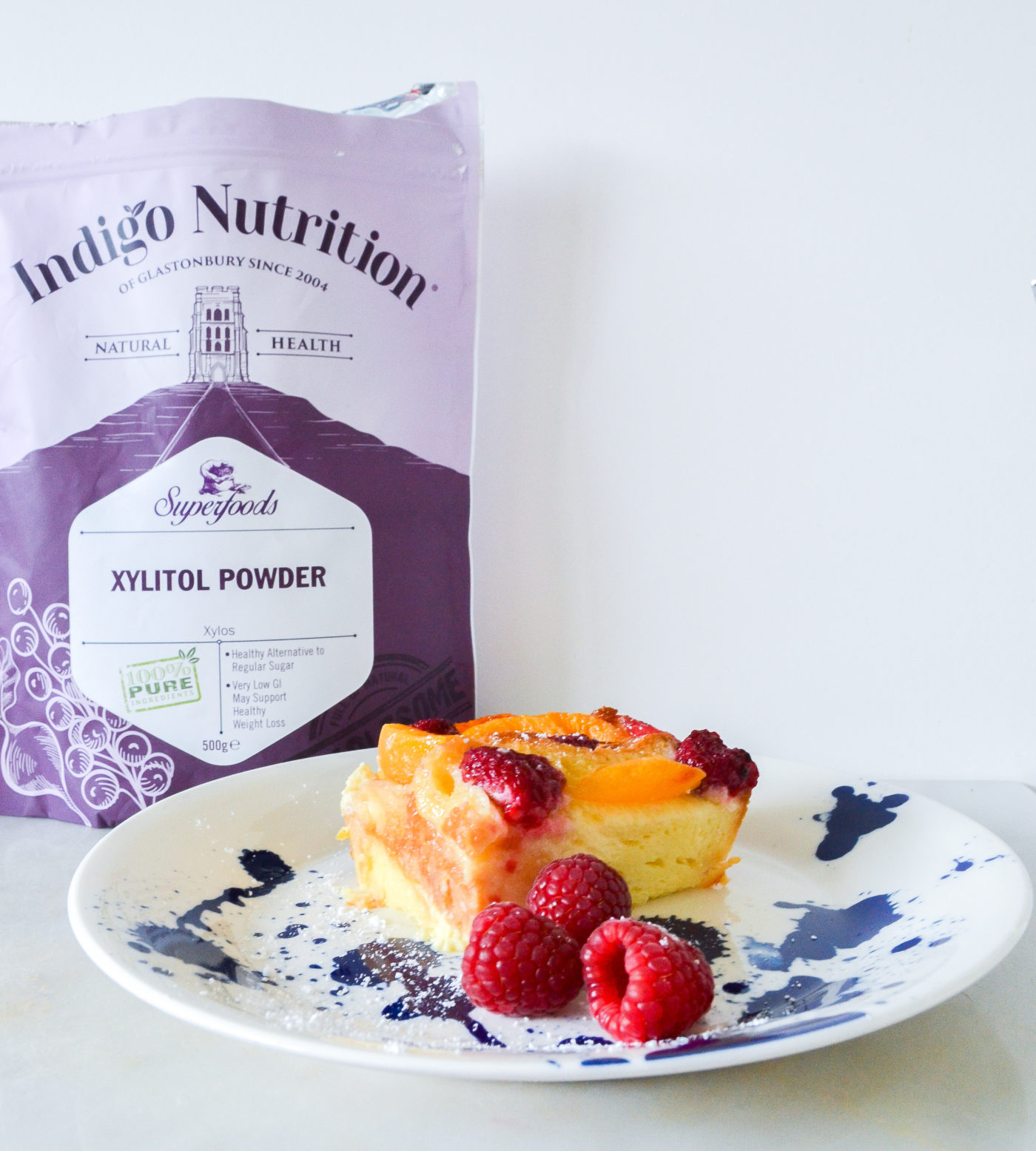 NOTE: Xylitol is extremely toxic to dogs, which is ironic given that it comes from bark.