A few weeks ago I had an email from Post Office Money.

They wanted to talk to me about my house, which I bought last summer, and a new online tool that they were working on – This Is My Home – looking at affordability of housing for first time buyers. Post Office Money were conducting some research into the saving and spending habits of first time buyers throughout the UK, but as well as finding out more about averages, they wanted to hear some individual stories that highlighted the challenges faced by first time buyers and the compromises that sometimes need to be made.

At the same time they wanted to show that it owning your own home IS achievable, even if you do happen to be single, self-employed and not keen on depriving yourself of treats. (Me.)

My unlikely story of home ownership

By the time I got to about 35, I felt like I’d really missed my chance to get on the property ladder. I was living in Bristol at the time and house prices were through the roof, (pun intended). My rent was so high though that had no disposable income left to save – I was caught in the trap.

Mostly, I felt okay with it. When I was growing up we lived mainly in rented properties and moved house quite a bit, so I guess I was used to it. I convinced myself that owning a house wasn’t all that important – I just couldn’t see it ever happening, especially not when I was self-employed. (Everyone knows blogging isn’t a real job right?) I felt like I’d made my peace with always renting.

‘It’s great!’ I would say. ‘If anything goes wrong it’s not my responsibility to fix it!’

What I’ve learnt since buying my own house last year though is that owning a home comes with a lot more feelings than just responsibility. Having never owned a house or had such a massive debt, I thought it would feel overwhelming. I thought it would be a pressure, something always at the back of my mind. I even worried that I might resent the house, or feel trapped by it, given that I’m not used to the idea of living in one place for a long time.

I couldn’t have been more wrong.

I guess it’s a bit like attachment theory. When you form a strong bond with a child and meet all of their needs, you give them a secure base from which to explore the world. Attachment parenting, in theory, creates children who are very independent and confident, because they know that they have a solid foundation.

That’s how I feel about owning a house.

I feel secure, in every sense, and with that comes a feeling of freedom. I feel proud too, to be a single woman who has built a solid business and then used that financial security to get a mortgage. I’ve planted out the little apple tree that has grown from a pip Belle planted when she was a baby and that we’ve been dragging from house to house in a pot that it’s too small for. I’ve turned the garden from a prison yard into a (work in progress) tropical paradise. I’ve had the loft boarded and insulated, had wardrobes fitted, painted walls and made several rings on the wooden kitchen worktops with cat food tins without having to panic about what a landlord is going to say.

So how did I manage to finally buy a house?

The most important thing I did in terms of being able to afford to buy my own house was getting out of Bristol. I LOVE Bristol, but I was paying £1,275 a month in rent for a modern, barely three bedroom semi. Add on high council tax bills and the general costs of living, shopping and parking in a city, and it was just impossible to save. On top of this there was no way I was ever going to be able to afford to buy something decent in Bristol. It was just too expensive.

Location is such an important factor when it comes to house prices. The Post Office Money research looked not just at how people save for a deposit, but also how where you buy impacts affordability. Do have a look at the new This Is My Home site – it can help you map out your deposit savings plan based specifically on where you want to live. It might even inspire you to compromise on area to get more for your money.

Although my move back to Somerset was triggered partly by a relationship break-up, I also knew that it made financial sense. I just couldn’t afford to live in Bristol if I wanted any kind of long-term financial security, especially not if I was on my own. So we moved back to Taunton, where both my children were born. My rent was slashed to £675 a month for a flat that was bigger than my house in Bristol, and the associated living costs fell too. Suddenly I’d freed up hundreds of pounds a month just by moving an hour down the M5. Not only that, but house prices in Taunton are significantly lower. Suddenly it seemed like owning a house might not be a totally impossible dream after all.

The next couple of years went well work wise, and in 2016 I opened a Help To Buy ISA. The idea of one day buying a house still felt a bit unreal, but I found that with a focus for the savings and the lower living costs in Somerset, I was able to save quite a bit – £9,000 in fact, in just a year. I had to save extra money then of course for all the extra bits like legal fees and survey costs. Short of taking your own surveying qualification there’s no way round these bits, so be sure to factor them into your financial planning.

Well, you’ll have to watch this short film and find out. You also get to have a nosy inside my house AND see all three of my cats so it’s definitely worth it if you’re the sort of person who likes to see other people’s bookshelves and bedding. (My favourite bit is Humphrey in various positions on the sofa.)

I appreciate that my journey is probably not typical of first-time buyers in the UK, and that £9,000 isn’t much of a deposit.

According to the research from Post Office Money in fact, the average first-time buyer actually spends four years saving for a deposit, typically putting aside almost 20% of their household salary. That might seem like a long time, but then the average deposit for first homes in the UK last year was £51,500 – 24% of the value of the property.

I guess I could have waited longer, saved more, and had a smaller mortgage, but I had a sense, once I knew it was feasible, of just needing to do it as soon as I could. I’d waited so long already, and seen house prices rise and rise, I didn’t want to miss the boat again.

Plus I had Belle. She was already 14 when I started saving – if I had saved for four years then she would have left home already, and never properly got to experience that security that I knew she craved.

House prices have risen faster than wages for first time buyers over the last year, so I’m glad I made the leap when I did. If you’re wanting to get on the property ladder then hopefully I’m proof that it is achievable, even if you’re not the classic ‘full time employed couple in their twenties’.

Top tips to help you save a deposit

To get you started, Post Office Money has a few tips:

Cut back on the essentials – the easiest (and most common) way people manage to set more money aside when saving for their first home is finding ways to cut down on their day-to-day spending. This could be as simple as switching to supermarket basic brands, comparing energy and mobile providers, or even reducing your rent by moving to a less expensive property.

Map out a deposit goal and stick to it; particularly if putting aside money with a partner – Be sure to agree how much you can both commit to save realistically on a monthly basis and hold each other accountable, so it’s more difficult to splurge. Look for tools that may help you such as the This Is My Home 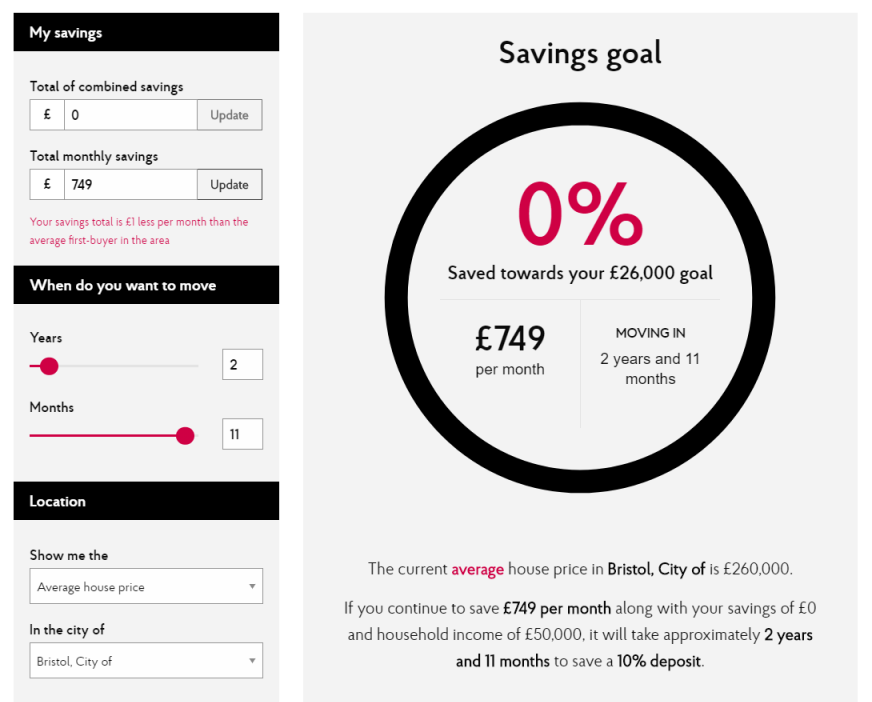 Can you reduce how much you need to save? – If your goal seems out of reach you could always consider how you might reduce the pot you need to save, such as buying a smaller property, looking at a different location or considering no-deposit mortgages.

When looking to buy, seek out up-and-coming areas – young buyers often need to adjust their expectations when it comes to location but you can often sniff out which areas are likely to increase in value by looking out for new developments, new businesses setting up shop in the area or improvements in local schools and crime rates.

Don’t be disheartened if you have a set-back – 13% of FTB savers feel like a failure for not reaching their savings goal in the time they initially intended and it’s very common for savers to end up dipping into their deposit fund to pay for other expenses. While it’s obviously best not to make a habit of this, prospective homebuyers shouldn’t let a small slip-up deter them as they continue to save towards their goal.