I arrived at the warehouse on the outskirts of London feeling nervous.

I pushed my way through the plastic strip curtain covering the door. I felt like I was nine years old again, going into the chilled food aisle at Gateway with my Gran.

My head was full of Spanish phrases. ‘Tengo tres gatos,’ I muttered to myself. ‘Tienes mascotas?’

On the other side of the plastic curtain a film crew was setting up.

It wasn’t your normal kind of first date scenario.

First dates can be pretty nerve wracking at the best of times. Blind dates even more so. Add in the fact that you are being filmed and the whole date has to be conducted in a language that you’ve only been learning for three weeks and the scope for personal embarrassment is massive.

Fortunately I do not embarrass easily, which is why when language app Babbel set me the challenge a few weeks previously I had been all over it. I mean sure, I’d been secretly hoping that I would end up with French or German, as I studied both of these up to A-level, but Spanish… I’ve watched a bit of Dora the Explorer. I felt up for the challenge.

The fact that my date was Spanish had only been revealed to me three weeks previously in an Oscar ceremony style envelope opening. With the cameras on me, it was revealed that my date was going to be Marco, and off I was sent with a subscription to Babbel and a childlike desire to be star pupil. (I was one of four people taking up the challenge and damn it, I was going to be the best.)

How does Babbel work?

So there I was.

I had Babbel and I had three weeks. I was a little daunted, but I got stuck in. You can use Babbel on your desktop or via the app, but I did all of my learning through the app as liked the flexibility this gave me. You can download lessons to do offline, so I could do twenty minutes on the way to work easily, or do a little bit in bed last thing at night. (I had the idea that it would work a bit like a hypnosis and that if I did it just before going to sleep it would SINK IN without me having to do anything.)

The Babbel team recommended that I did around 15-30 minutes every day and I have to admit that initially I thought I might struggle. I was worried that it might feel a bit like a chore – like having homework set that you didn’t want to do – but it really didn’t. I actually found myself looking forward to it. Sometimes I did an hour, sometimes less, but the time always passed pretty quickly while I was learning.

Your learning on Babbel is split up into lessons, which probably take around 10 or 15 minutes each, depending how quickly you go. You can either work through a course of lessons, or try other ad hoc lessons according to why you’re learning. I went through the whole of the beginner level 1 course and part of level 2, but I also dipped into other subjects, like this one, you know, just in case: 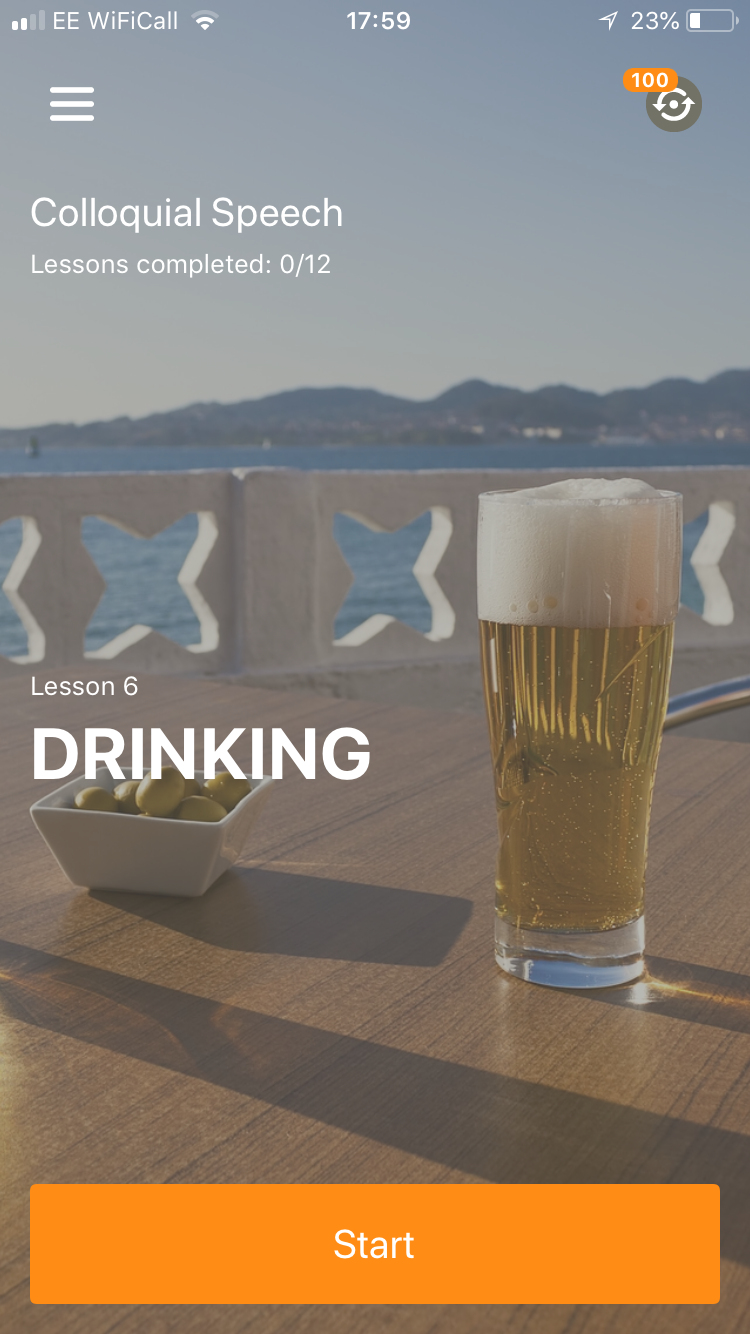 Once I had done a few of the beginners lessons and got to grips with some of the basics I found the grammar course really useful, particularly the ‘building sentences’ lessons. They gave me a lot more useful, basic tools for things like asking questions and making things negative. This made me feel a lot more confidence in terms of putting my own sentences together rather than just repeating phrases.

Each lesson follows a similar formula, teaching you new verbs, phrases and vocabulary and then testing your memory and how you adapt your new language to different contexts. Babbel uses a mixture of things like listening exercises, spelling tests and practise conversations to reinforce the new vocabulary without it feeling repetitive.

I also often found the practise conversations quite funny. The characters didn’t pull any punches. They would just meet and say what was on their mind. If only dating in real life was as straightforward as this: 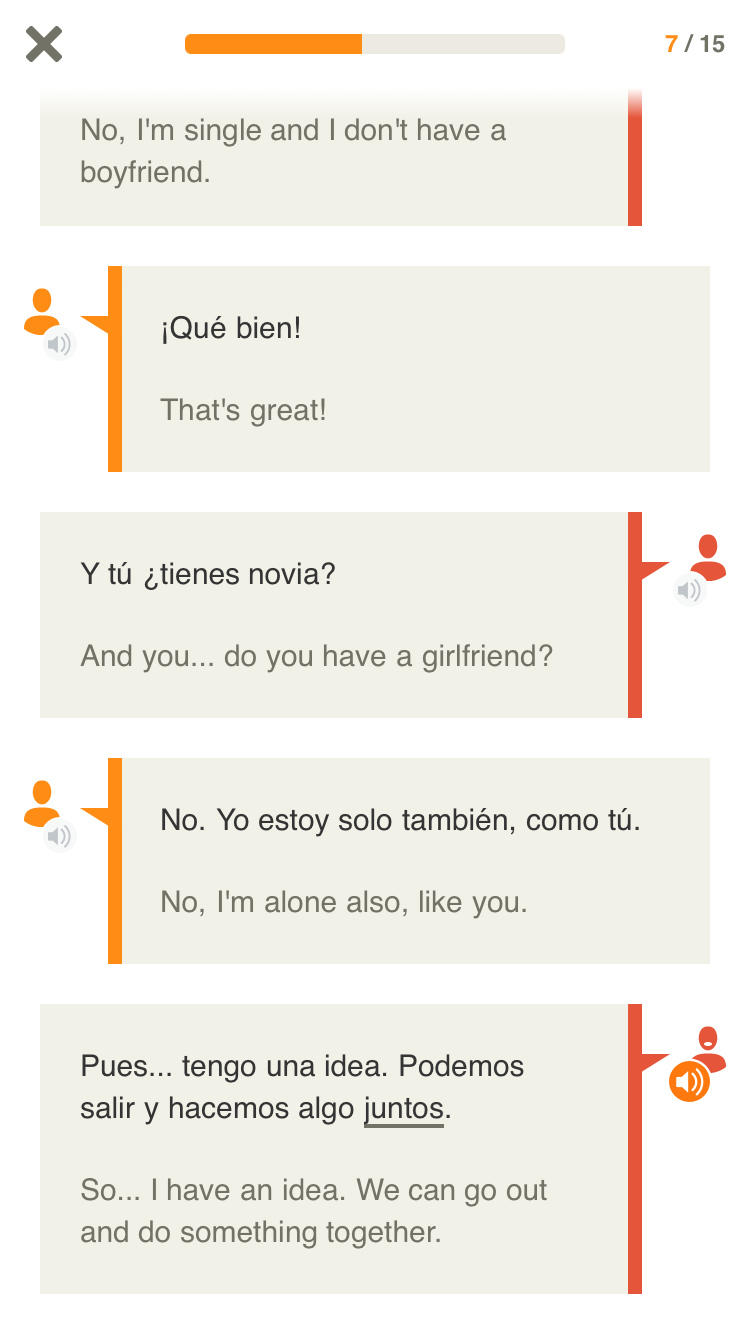 Sometimes I did wonder if Babbel might be toying with me a little bit, being a bit passive aggressive maybe? It was just the way some of the questions were phrased, and some of the images that went with them.

‘Oh I see, you’re all alone are you?’ it seemed to be asking sometimes. 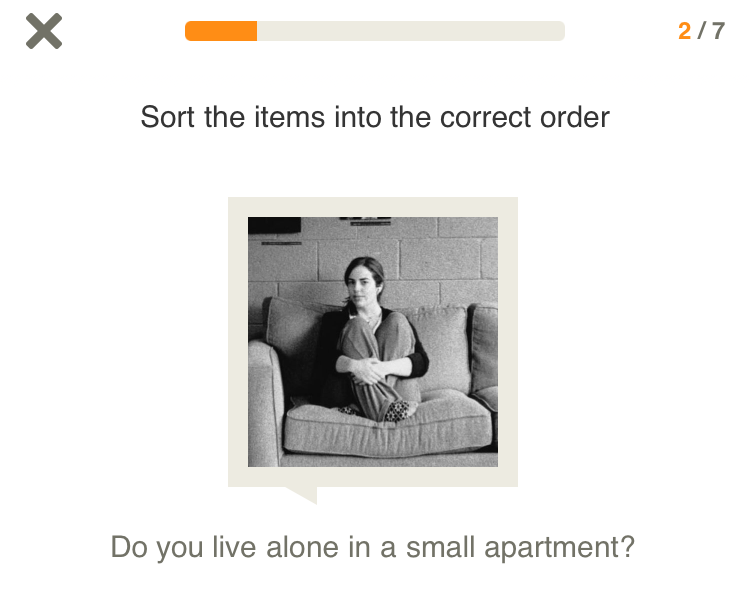 Apart from being made to question my own existence, something strange and unexpected happened over the three weeks of learning Spanish with Babbel.

I know that’s the point of the app and so it shouldn’t be a surprise really, but somehow it felt too EASY. it didn’t feel like I was having to actively remember things, it just seemed to be going in. I was worried that at 40 years, with a slightly less reliable memory, that it would be difficult, but things just seemed to stick.

I was also enjoying it a lot more than I thought I would. I’ve not really spent time like this learning something new for a long time and it felt good. I felt proud of myself, like I was rising to a new challenge and doing well.

When it came to the big day I have to admit that I wasn’t really thinking about the date element of proceedings at all.

I felt more like I was back and school and getting ready for an exam. Everyone kept telling me it was about having fun and that no one expected me to be an amazing Spanish speaker after three weeks, but I expected myself to be.

That makes it sound pretty intense, so I should clarify – I LOVED exams when I was younger. I thrived on the pressure and got a massive sense of acheivement from feeling prepared and doing well. It’s a feeling I’ve not had in a long time but it’s one I want to have more. As I’ve got older I’ve definitely tried to settle myself into a life that is comfortable and easy – learning a new language helped me to push those boundaries out just a little bit. I liked how it made me feel.

As the big moment loomed though for me to walk out in front of the cameras and meet Marco for the first time I got VERY nervous. I started to feel myelf turning pink. It really WAS like being back at school. And then there I was, introducing myself and having to start a conversation in Spanish. 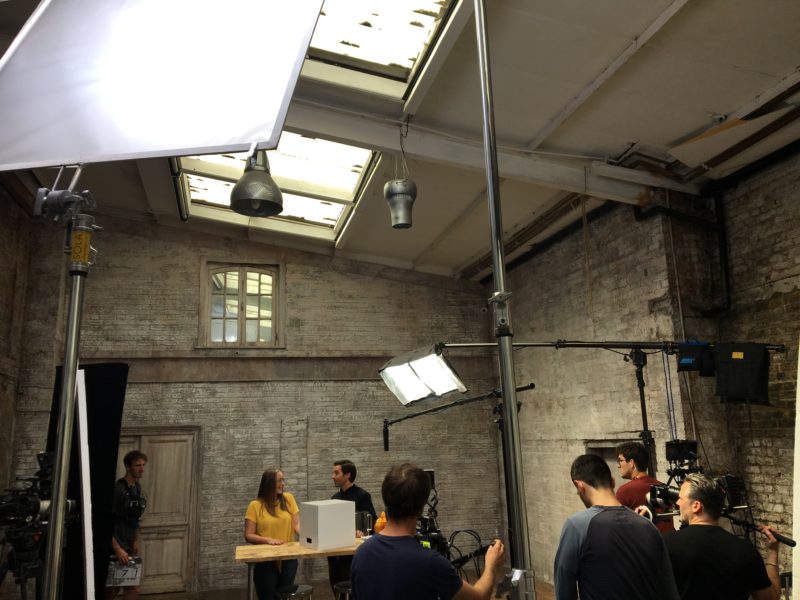 Initially it was hard. Marco was quiet – I suspect he had been told to let me take the lead to test my skills – and I felt a little bit panicky. There is definitely something about speaking in a new language that makes you feel vulnerable, especially when you normally rely so hevily on words and humour to communicate.

After the first five minutes or so though I relaxed into it and my face stopped being quite so sweaty. I began to realise that, just like life, it doesn’t really matter if you make a mistake, the important thing is that you have a go. I realised that I could actually pick out quite a bit of what Marco was saying, and I managed to work in quite a few of the phrases I had been practising.

I asked him about where he lived, where he was from in Spain, what he did for work, and a bit about his family. I even asked him if he believed in love at first sight, to which he answered yes. (He definitely meant me.) We then had a go at making cocktails and the ‘drinking’ lesson really came into its own.

(I also think I said ‘tengo tres gatos’ at least twice, but then I do feel like it’s quite an important aspect of my life at the moment.)

All in all, once the pinkness had receded, I was pretty pleased with myself. The rest of the team seemed impressed with my progress too, which did bring the pinkness back a little bit, but it was totally worth it.

In fact I enjoyed learning Spanish so much that I’ve been researching classes so that I get to chat to people in real life alongside using Babbel.

And of course I need to be ready for when Marco asks me on that second date.

Babbel prices start from £4.75 a month if you want to sign up for 12 months, but you do have a 20 day money back guarantee so if you want to just have a go and see if it works for you then you can. When I think about how much I learnt in 20 days I can’t see how you would ever want to get your money back.

Learn a new language and feel awesome with Babbel here and get THREE MONTHS FREE when you sign up for a three month subscription.