There is literally so much opportunity for hilarity in this post that I don’t know where to start.

It’s a serious subject – my vagina and the laxity thereof – but also, it’s my VAGINA, so. Also, as serious a subject as it may be, it’s always good to be able to have a laugh about these things isn’t it? I mean sure, the woman we saw when my Mum and I went to register my Gran’s death wasn’t exactly on board with that as a concept, but I think it’s important to be able to laugh about serious things – it helps us talk about them.

First up I’m imagining your mind boggling a little at the term ‘vaginal laxity.’ I don’t blame you. Let’s not get carried away though, nothing is flapping about in the breeze like the proverbial wizard’s sleeve, it’s just a term used to describe what happens naturally to your vaginal tissue as it ages and after it has gone through trauma like childbirth. Your vagina is made up of collagen fibres, just like your skin, and it’s natural that over time it can lose its strength and shape.

So, while this loosening is to some extent ‘normal’, it can have a significant impact on our lives. It can play a part in urinary incontinence and it can impact on sexual sensation and satisfaction. Neither of these are things you should feel that you just have to put up with, especially if they are changing the way you go about your day to day life. If you’re not enjoying sex any more, or are worrying about going out because of the fear of leaks, then that’s not okay.

The Geneveve treatment, available at The Clinic by Dr Mayoni Gooneratne, uses tiny pulses of radiofrequency energy to gently heat the deeper layers of the vaginal tissue to stimulate the body’s own natural regenerative processes. Dr Mayoni is passionate about helping women to feel confident and comfortable, which is why she is the perfect doctor for a treatment such as Geneveve.

Dr Mayoni is an experienced general surgeon and during her medical training, she spent several years specifically studying pelvic floor dysfunction. She saw for herself just how deeply so many women are affected by pelvic floor issues, yet so many don’t seek help for it because they feel it’s something they just have to accept, or they are embarrassed to talk about it. Dr Mayoni’s passion for female wellness is evident throughout the procedure and she made me feel at ease which was great, especially with the type of treatment I was about to have.

It was a grey Friday in January that I look the train to London, to try the Geneveve treatment for myself, unusually aware of my vagina, amusing myself by composing Instagram stories. 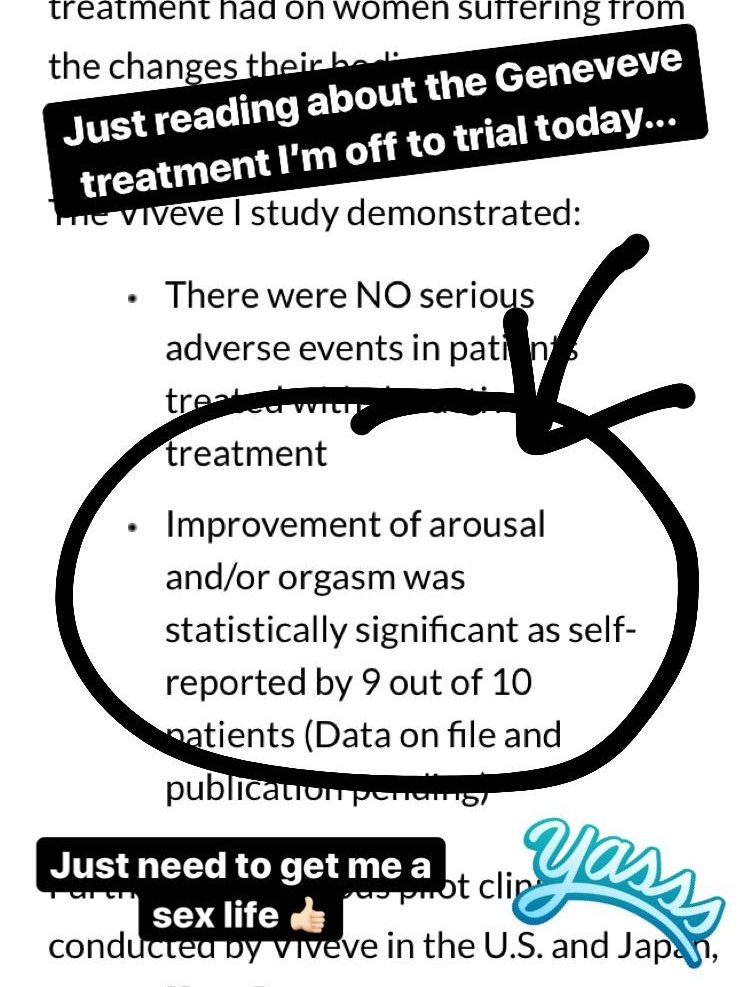 I’d had a phone consultation the week before with Dr Mayoni, so I wasn’t nervous at all. On the phone we had talked through my current situation and why the Geneveve treatment might be suitable for me, and she had talked me through the procedure and what to expect. I could tell just from our chat that it was a subject she felt very passionate about, and I was pleased to have the chance to ask any questions.

Friends and family who I’d told about the treatment in advance were intrigued and appalled in equal measure.

‘But what does it DOOO?’ one kept asking.

‘Oh, I don’t know really,’ I said, ‘something to do with collagen? I’m sure I’ll find out when I get there.’ I have a ‘let’s see what happens’ approach to most things, which I normally find works well. Besides, did you not read my Instagram Story above? Who doesn’t want better orgasms?

I was meeting a friend for lunch beforehand and when I told her about it she was very excited.

‘Oh do tell me how it goes!’ she said. ‘I’m going to Mexico in February with a man I met online and I AM worried about my vagina.’ (This friend is older than me, and quite possibly the most glamorous woman I have ever met. I want to be her when I grow up.)

I broke it to her that it takes 30 days for improvements to start becoming noticeable, as the collagen regenerates itself, and that the best results aren’t visible until three months after the procedure, which she was quite disappointed about, however, perked up when I told her I would let her take me to get my colours done for my 40th birthday and so all was well.

After lunch I headed towards Honor Oak and Dr Mayoni’s clinic, stopping on the way for a quick refresh downstairs in the toilets at Nando’s and to get some chewing gum. I’m not sure where the gum idea came from – I just felt like perhaps I should make the effort to have fresh breath if a stranger was going to be putting things INSIDE ME?

I was a bit nervous before I arrived, as I wasn’t sure what to expect, but as they do a lot of standard spa type things too, like massage and facials, it had a very relaxed, comfortable feel to it, and there was a lovely smell of essential oils going on in reception. 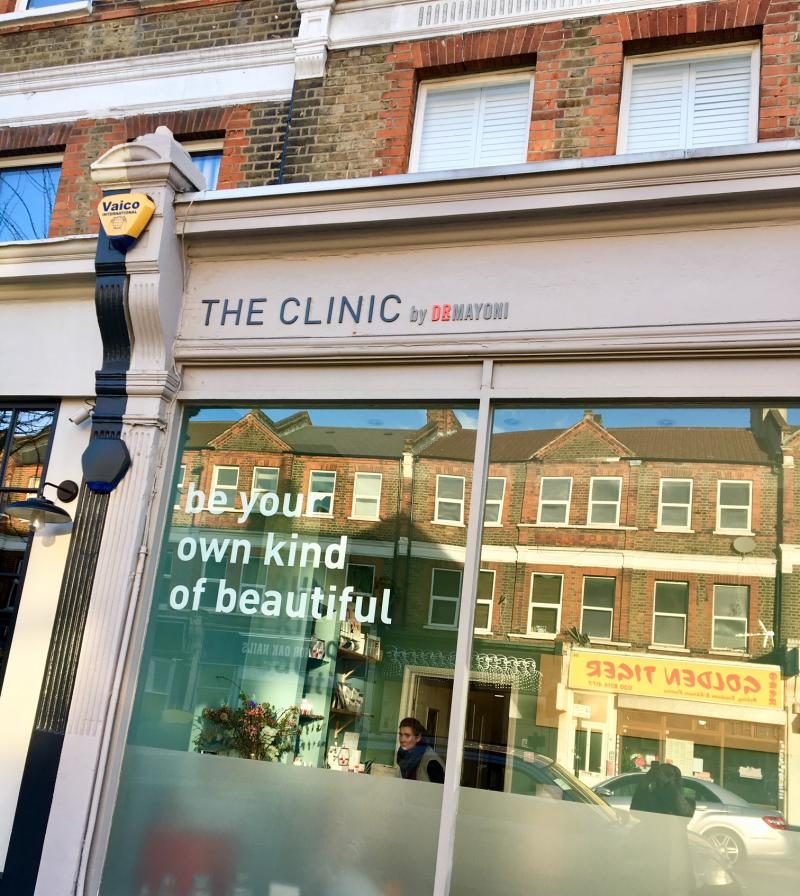 I had to fill out a few forms about my current pelvic floor situation – (leaks – some; sex life – none) – and then Dr Mayoni took me through to her office for a chat about what was going to happen, along with Naomi, who carried out the treatment. I felt immediately at ease as they both laughed at my jokes about the ‘coupling fluid’ and lighting a few candles to up the romance – at no point did it feel at all clinical or scary. 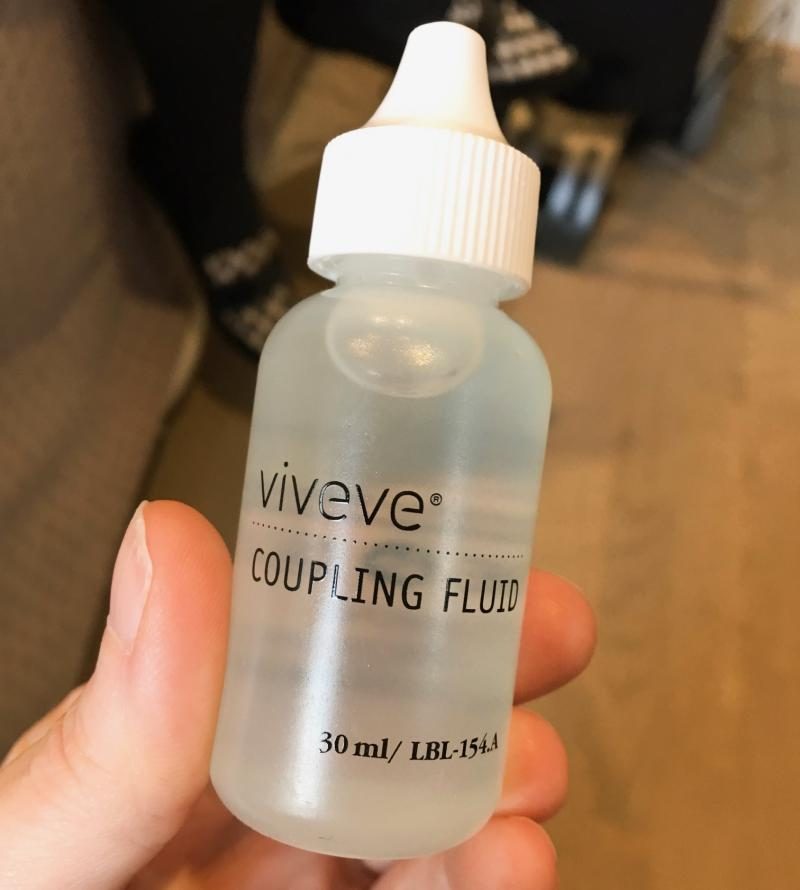 Dr Mayoni talked me through the treatment, and showed me the probe – about the size of a thumb, if you want to think about it that way. Essentially the Geneneve treatment works by heating the vaginal tissues at a cellular level to stimulate natural collagen production. This new collagen revitalises and tightens the tissues just inside the vaginal opening. 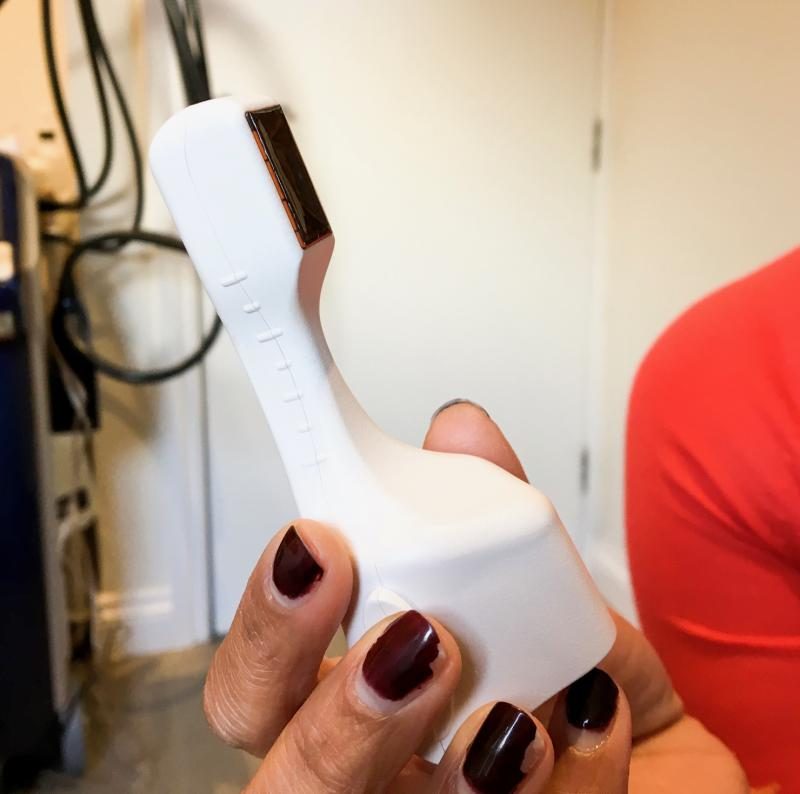 It was time to get down to business.

I was shown into a warm, dimly lit room, just like I was about to get a nice relaxing massage.

‘Let’s review the situation first of all,’ said Dr Mayoni, ‘just to see if it’s in line with the symptoms you’ve described.’ I had told her that I have been known to have the odd leak, especially when I have a cough, or if I sneeze too many times in a row.

I assumed the super sexy smear test position, and Dr Mayoni went for a look.

‘Can you cough for me please?’ she said.

‘Ah yes,’ she said, nodding, ‘I can see that there is some loosening….’ Naomi made sure I was nice and comfortable and cranked up the machine. The treatment takes a good half an hour, so it’s worth being comfy. You can stop any time though, that’s not a problem. Initially it did feel a little strange, but it was no way near as bad as a smear test. There is a slight hot/cold sensation, as there is surface cooling going on at the same time as the deep heating, but after initially adjusting things when it felt slightly at the ‘burny’ end of the spectrum, I could barely feel it.

Although it was Naomi carrying out the treatment, Dr Mayoni stayed for most of it to chat to me about her medical background and experiences with the treatment so far. It’s very new in the UK, and she is keen for as many women as possible to know about it. For her it’s the missing piece between living with leaks and invasive surgery, and she has seen it make a huge difference to the women she has treated.

For my part, I chatted about my kids, dates I’ve been on and whether or not I should add details of the treatment to my Tinder profile.

Dr Mayoni agreed that it was an excellent idea.

(I should point out here that the Geneveve treatment definitely isn’t something you get for someone else – it’s very much about you as a woman wanting to improve your own health and wellbeing. ‘We don’t do designer vaginas,’ Dr Mayoni confirmed.)

About half way through the treatment Naomi switched to a slightly longer probe.

‘It’s so we can reach a little bit further in,’ Dr Mayoni explained. ‘We want to create a column of really strong vaginal tissue. You’ll be good and tight all the way up then,’ she added, smiling broadly and making one of those gestures where you clench your fist and pat your bicep with your other hand.

I laughed a LOT, which is a slightly odd sensation when you have a vagina full of hot probe.

‘You can pretty much get on with things after the treatment,’ Naomi confirmed, as she did her final round, ‘you’re just not allowed to put anything inside yourself for two or three days.’

‘Well’, I said, ‘that’s my weekend plans scuppered then isn’t it?’

After what felt like really not much time at all, Naomi switched off the Geneveve machine and we were done. I was left in private to mop up any leftover coupling fluid (*sniggers*) and then I made my way out to reception, where I was given information about after care. Not that there really IS anything. You’re in and out, and the only thing I experienced afterwards was perhaps a little bit of bloating and the next day a very slight tenderness inside, but hardly anything at all really.

Vaginas aside, I absolutely cannot recommend Dr Mayoni, and Naomi highly enough.  Honestly, I had such a good time with them that by the end of the appointment I wanted to move to Honor Oak and be their new best friend. They were relaxed but professional and put me immediately as ease. I had total faith in them and in their passion for what they do.

When Dr Mayoni put on Instagram ‘Bit of vag bants at The Clinic for a Friday!! Amazing to see you today @slummysinglemummy, sorry for ruining your weekend plans 😂’ I did think about asking her to marry me, although perhaps I was just in a fluster because of the whole intimacy of the afternoon.

Because the Geneveve treatment takes a while to make a noticeable difference, I’ll be doing a follow up post in about three months time. Sign up to my emails here to make sure you don’t miss out.

Find out more about the Geneveve treatment and about The Clinic by clicking the links. 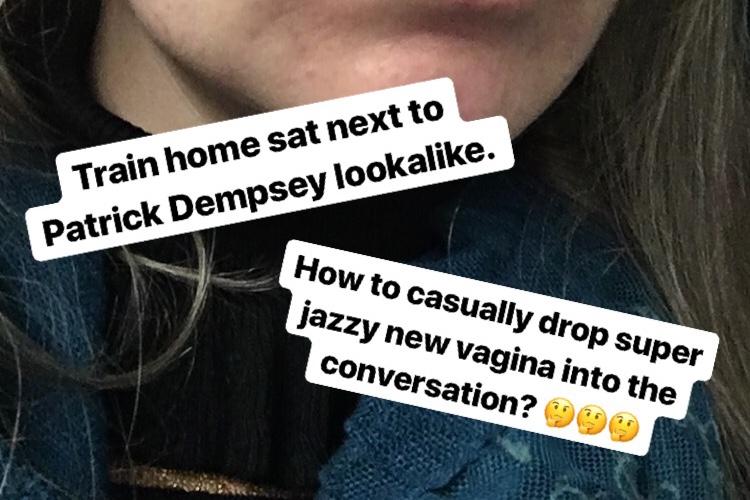