I have a confession to make. It’s a biggie, as I have two children, now 19 and 12, and it doesn’t reflect well on me as a parent.

I have never made a will.

I’ve never had any assets you see, so it’s never felt like something I needed to do. This is stupid I know, as I have two children and should I die I have nothing in place in writing to specify what I want to happen to them. I have a life insurance policy and various pension pots too, but at no point have I managed to get everything together in one place and make a proper grown up plan.

It feels even sillier as I have always had a bit of a reputation in my family as ‘the organised one’, but I fear this is based more on the fact that I used to spend a lot of time colouring in revision timetables than on my ability to manage important things like finances.

What is it then that puts so many people off writing a will? Is it fear of facing the reality of death? Concerns about cost? Anxiety around how the process works? It’s probably a bit of each of these for me.

This year though I was determined to get my affairs in order and so turned to The Co-operative Legal Services to help me write my will.

I’ll admit that I was anxious at first about what would be involved – would it be horribly complicated? Would it take up loads of time? Would I look stupid asking all the questions I had no idea about the answers to? The answer, thankfully, to all of these questions, was no. The Co-operative’s will writing service couldn’t be simpler; in fact I didn’t even need to leave the house as the consultation is done over the phone.

Before my appointment, I was sent over a load of materials to help me think about what provisions I wanted to make. For me this was reasonably straightforward as I don’t have much to leave, but it prompted me to think about things like:

The telephone consultation itself took just 15 minutes and my advisor made everything feel very straightforward. I didn’t feel like I was asking any silly questions and the whole process was really simple.

A draft of my will arrived quickly in the post. 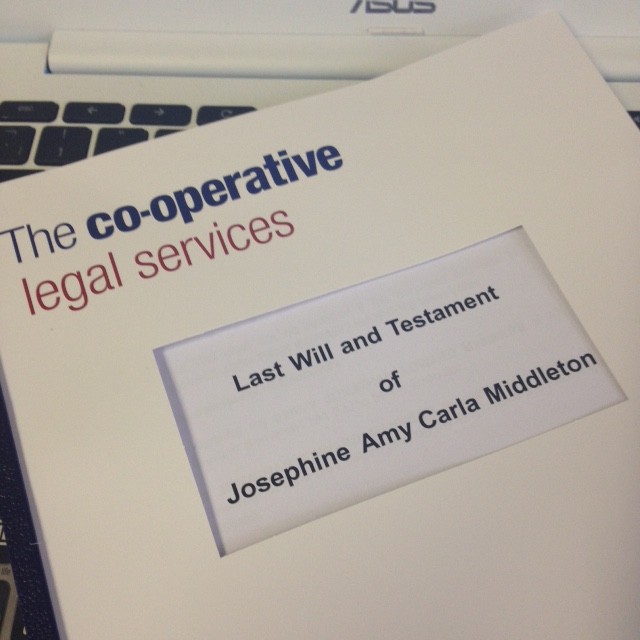 I was slightly disappointed that it wasn’t in scroll form, tied with dark red ribbon and sealed with wax, but I guess that’s modern times for you – no sense of drama. My Twitter followers were equally disappointed:

@mummyblogger as well as tea stained and burnt at the edges of course for extra authenticity!

The final step was to have it witnessed and to send it back to take advantage of The Co-operative’s free storage service. I kept a copy, which I thought about hiding behind an oil painting of one of my ancestors, hung over my fireplace, but then I remembered that I didn’t have a fireplace and wasn’t in an Agatha Christie novel, so settled on a desk drawer.

Have you made a will? If not, what’s holding you back?

If you’d like to find out more about making a will with The Co-operative then check out their website or give them a call on 0330 606 1009. They offer free initial advice and a fixed price on most services. Feel free to tell them how you heard about them!

You can also watch my interview with the Head of Wills at The Co-operative, where I ask all of the questions that you might be worried about asking. This is the short version of the interview, but there is also a long one here.

I received the will writing service free of charge for the purposes of this collaboration with The Co-operative Legal Services.