Last weekend my boyfriend and I spent a night in the amazing treehouse at Harptree Court. The idea was to tick off the ‘live in a tree’ item on my list of 40 things to do before 40, although it was so luxurious it almost feels like cheating. While we were there we talked about how strange it is that two people can experience the same event and have such different memories of it, and that made me think it might be rather fun to have a boy’s eye and a girl’s eye view from the treehouse. 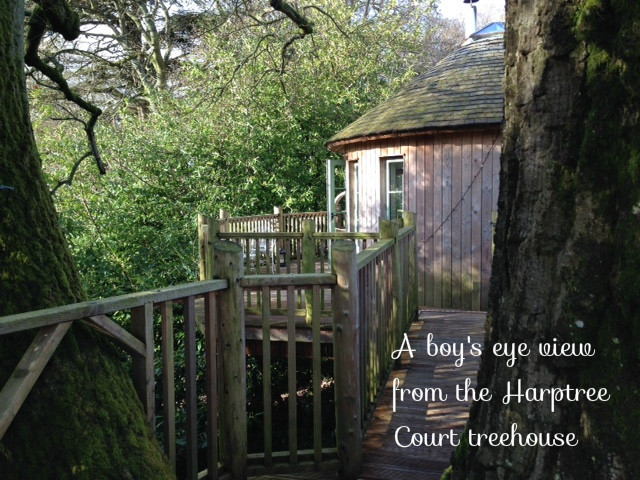 “Do you want to come and stay in a tree house with me?” Josie asked.

“Yes” was my obvious reply, not just because of the obvious opportunity to spend time alone together, but because Josie has a wonderful way of asking questions – even about mundane, dull things (which this is not) – and making them sound like wonderfully exciting adventures.  Perhaps it’s just a sparkle in her eye and the way her lips twitch with excitement after she’s asked a question.

If you’ve not come across Harptree Court before, it really is beautiful, nestled in some of the county’s most beautiful countryside. The village of East Harptree ies to the east, and, to the west, the aptly and unoriginally named West Harptree.  One likes to think that the village naming committee was in something of a hurry at that particular naming ceremony.  Perhaps they were exhausted after naming the nearby Nempnett Thrubwell and, feeling that they peaked too soon, decided it to play it safe for a while.

Harpree Court is something of a neoclassical gem, its Bath stone resplendently bathed in the winter sun.  I hadn’t realised that the treehouse, yurt and bed and breakfast were such a family business, and was pleasantly surprised by the personal touch of being shown around by the owners, Charles and Linda, who clearly take much pride in their achievements.  The estate has now been in the same family since 1879, and I’m always marginally jealous of those who have always lived in the same house, and who know that their fathers, grandfathers, etc have all looked at the same views through the changing seasons and rested their bottoms on the same toilet seats.

Linda greets us warmly, I explain who I am and she immediately recognises Jo by her bright blue glasses.  Having answered the usual formalities regarding whether we had got lost (we lied), where we’d driven from and how long it had taken, Linda helps us to unload our luggage.

Charles arrives a couple of minutes later, wonderfully dressed in his Argyll wellies and Barbour jacket with matching wax hat.  I’m rather disappointed that he’s not followed by two loyal black Labradors.  “I wondered if the hat was entirely necessary, but apparently it is” remarks Linda as Charles takes the trolley of luggage.  Charles and Linda make a lovable double act.  There’s no pretension or stuffiness, just an instant warmth and honesty.

As we head down the rear lawns towards the treehouse, Linda points out the footbridge, erected and left as a gift when The Great British Bakeoff was filmed at Harptree Court.  “Mary Berry came for tea last month” Charles exclaims, with rightful pride.  I feel that being able to claim such an illustrious tea guest is something of a double edged sword – I would love to entertain her for tea, but would be equally petrified of what to offer her to eat.  You can’t exactly serve an M&S Victoria sandwich.

The treehouse is carefully hidden from view, made visible only by the wooden staircase that leads up into the trees.  Charles tells me that in planning application terms it’s a bungalow on stilts, but to my amateur eye it’s an engineering masterpiece and the architect deserves a jolly good pat on the back.

Charles and Linda are clearly and justifiably very proud of their treehouse, and when we have climbed the wooden steps and enter for the first time, it’s easy to see why, the inside being even more impressive than the out.  The interior design is tasteful and discreet, and nothing looks out of place – well, nearly nothing.  The round, glass kitchen table and its two chairs are my only criticism of our stay.  They don’t fit with the feel of the treehouse or anything else in it.  Other than this minor detail, it’s all perfect. 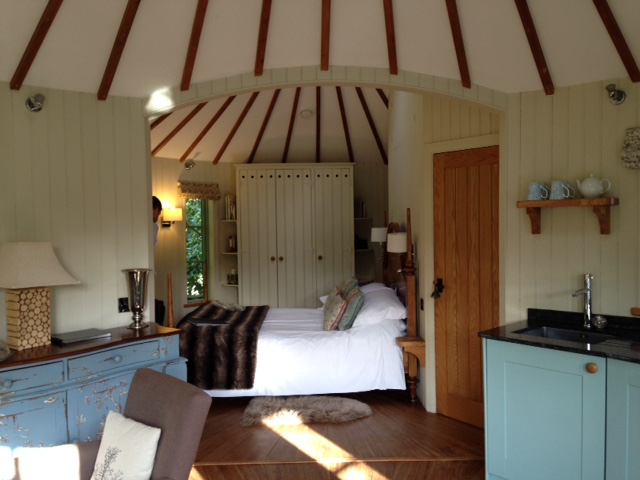 We’re in a total haven.  It’s peaceful and secluded, with all modern comforts, other than a TV, thank goodness. We’re given a quick guided tour of the fixtures and fittings, and then we’re left to explore.  Our hosts had given a list of recommendations of the many walks and great pubs nearby, but we have already decided not to leave the treehouse at all if possible.

In front of a wood burning stove are two arm chairs and a beautiful chess set.  Whilst Josie prepares for defeat, I make tea and check out the catering arrangements. The kitchen is rightfully small, but has all you need, including locally sourced ingredients for a cooked breakfast (the sausages were utterly amazing), teas, coffees, prosecco, and the moistest, zestiest lemon drizzle cake I’ve ever tasted.  Admittedly, you couldn’t serve a cake of mediocrity at the home of Bakeoff, but this really is exceptional. 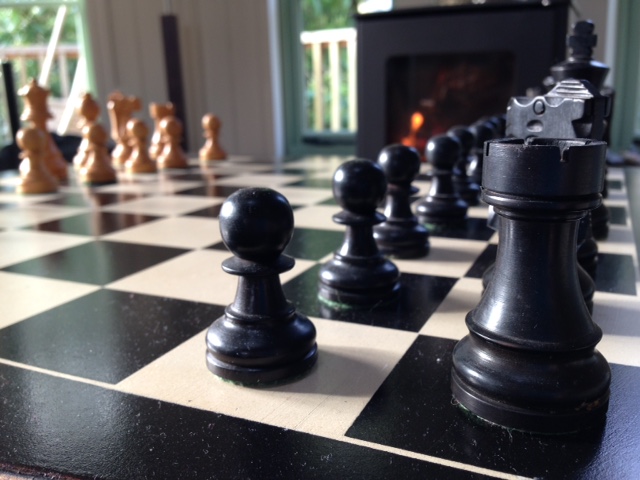 We sit in front of the fire for a few hours playing chess.  It’s starting to get dark, and the light of the fire is now brighter than daylight in the tree house’s two connected rooms.  The beauty of the tree house’s construction from floor to its two hexagonal ceiling lights really is a huge distraction, which is possibly why I lose the chess tournament 2-1.  Frustrated by my poor chess performance, I check out the visitors books.  There isn’t a negative comment to be found.  The treehouse is an incredibly romantic and secluded setting, and running back through the past three couple of years I read of countless proposals, wedding nights and anniversaries.  Our surroundings have clearly inspired a generation of romantics, and it goes without saying it’s probably played its hand in helping to create a new one as well.

We decide the tree house is somewhere James Bond would be found in the final scene of a Bond film  Near death experiences, murders and nuclear wars averted, James would be found lying on the fur rug on the bed, with his girl, whilst M unsuccessfully tries to contact him.  As all boys do, I’m imagining myself in the title role as we lie on the bed, taking in the peace and quiet.

In my mind, my ripped dinner jacket is on the floor next to my blood-stained shirt, my Walther PPK is on the bedside table, and there are cuts and bruises on my forehead and arms.  I can’t help wondering why Bond’s mother doesn’t insist he always packs Witch-hazel and a sachet of Vanish.  In reality, Josie is cuddling me, looking up at the hexagonal window in the ceiling.  I ask what she’s thinking, trying hard to disguise my poor impression of Roger Moore.  “I love tessellation”, she replies.

It’s not the lustful “Oh, James” that 007 might hope for, but this particular Bond is more than happy with his lot. 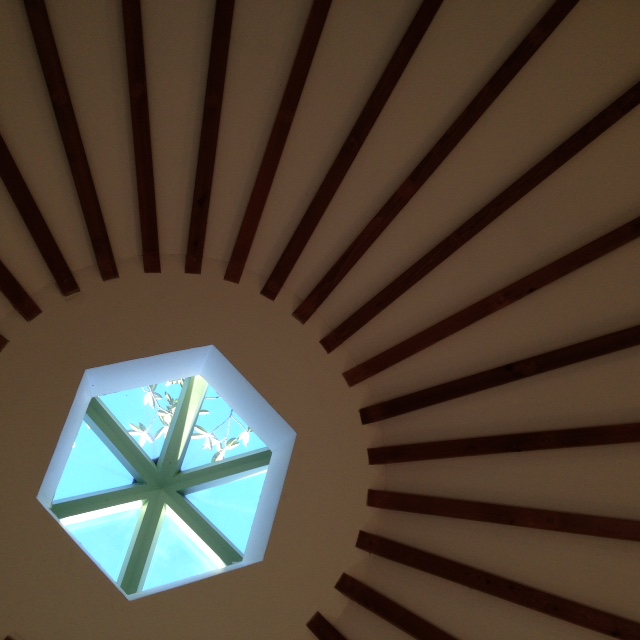 We were invited to spend the night in the treehouse for the purposes of this review.