I was 25 before I went to my first funeral.

It was my Gran’s, and a bit of a steep learning curve, as I was in charge of writing and reading the eulogy. I say reading, what actually happened was that I read about a sentence, and then stood there in front of everyone, sobbing and sniffing, until my mum came up and read it out for me. I stood next to her if that counts.

I had a hand in the funeral planning and although it was a privilege to be involved, I was at a bit of a loss – my Gran hadn’t left any specific wishes or plans, so how did we really know what she would have wanted? When I was little she always said she wanted to be pushed off a cliff at 65 and she quickly changed her mind about that one, so without any explicit instructions, who was I to say what music she’d want played at her funeral?

Funeral planning is a bit of a taboo, something we don’t want to talk about, but it shouldn’t be – we’re all going to die after all, it’s the one thing in life we can be certain of, so why not plan for it? Making a will last month really brought it home to me.

“Do you have any preference over whether you want to be buried or cremated?” the consultant had asked me.

“Not really,” I said, thinking I was being helpful and easy going, “I don’t mind either way.”

“OK,” she said, “but you might want to give it some thought as it’s often much easier for the people you leave behind.”

Do you know, as obvious as that sounds, I had never thought about it like that. If anything, I thought I was being accomodating by not stating a preference, but the more I thought about it, the more obvious it seemed. I thought back to my Gran’s funeral planning, when we were all so overcome by the stress and emotion of her death, and about how much simpler it would have been if she had laid it all out for us and all we’d had to do was say ‘yes, go for it.’

A prepaid funeral plan has massive cost advantages too. Funeral costs have doubled in the last decade, so imagine how much I could save by paying for my funeral now, at today’s prices – it’s definitely worth thinking about even if only from a financial point of view.

To help you think about setting up a prepaid funeral plan, I’m going to be getting busy over the next few weeks with the Co-operative Funeralcare – by the end of my investigations, you should know everything you need to know about prepaid funeral plans, meaning you can save yourself money and save your loved ones hassle. 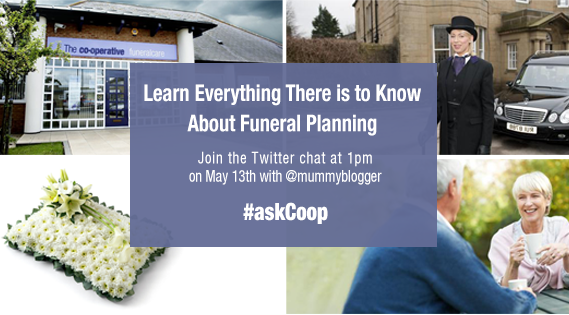 Here’s what I’m going to be doing:

Putting the services to the test

This week I’m visiting my local Co-operative Funeralcare provider to talk through my own funeral plans. I’ll find out first hand what the process involves and tell you all about my experiences.

Next week I’m going up to the Co-operative’s head offices to interview David Collingwood, Operations Director at Co-operative Funeralcare, to find out more about the process and benefits of prepaid funeral plans. I’ll be able to ask him all of those questions that you might think are too silly or obvious – I have no shame! You might simply at this point just be thinking ‘What is a funeral plan?’

You’ll be able to watch the film of this, so please let me know what you’d like me to ask.

Finally, on 13th May at 1pm I will be hosting a Twitter party, alongside experts from the Co-operative Funeralcare, answering your questions and helping you to think about what you might like your funeral to include. Please put the date in your diary and share this tweet – we’d love to help as many people as possible take the stress out of funeral planning.

Curious about funeral planning? Come and join the chat with me and @TheCooperative on May 13 @ 1pm #askCoop Please RT pic.twitter.com/mXlfhSUuuI

And in the meantime, why not have a watch of this video to find out more:

Have you thought about a prepaid funeral plan? What questions would you like me to put to the experts?

This project is being run in collaboration with The Co-operative.