Morning everyone! Today I have a Galt toys guest review from my sister Annabel. Please do read it and say nice things!

“I’ve got a surprise for you.”

These are some of my four year old son’s favourite words. He is starting to treat them with caution though, having overplayed the ‘surprise’ approach many a time – “I’ve got a surprise if you brush your teeth/eat dinner/stop sitting on my head at 6am.” The excitement is swiftly followed by crushing disappointment when the surprise is revealed to be a kiss from me/an apple/an invisible pet.

We were walking back from school and his interest was piqued by further description of the surprise. “It’s in a box.” I say. “It arrived today.”

This is good news to him, he mentally ticks of the apple/kiss options. He picks up his pace and breaks into a run, “What is it Mummy?”

It was this from Galt toys*: 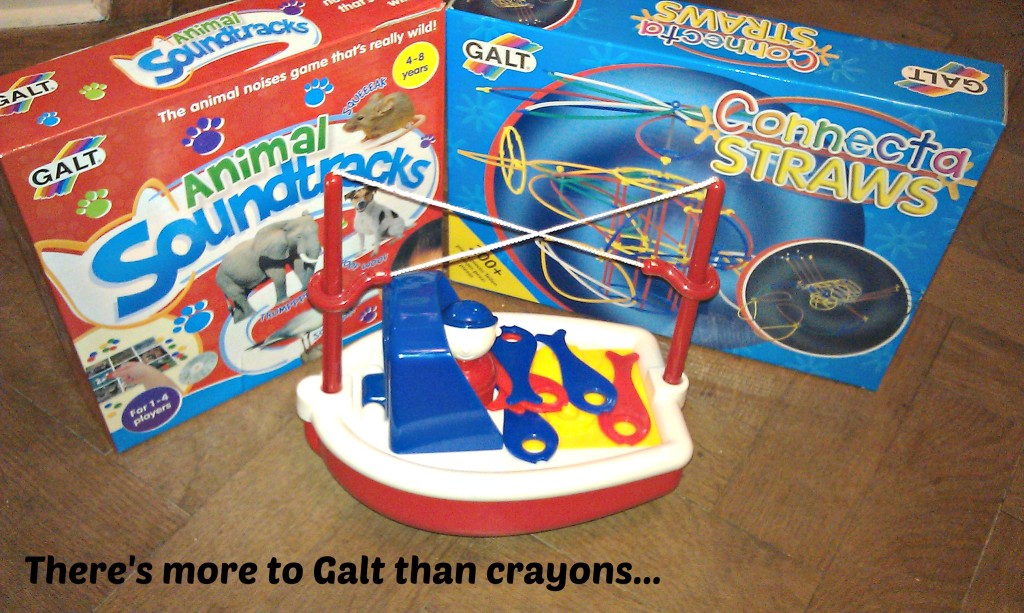 Now, I thought Galt mainly did crayons. I remember being really shocked at a Galt marble run my son received as a gift one year.” But they only do crafts.” I thought, “What’s this branching out into new territories?” So I was as intrigued as the children.

“Who’s it from?” he says, wide eyed and excited.

“Aunty Joey”, I reply, helping her in her quest to be my children’s favourite aunt. If you have read my sister’s fabulous, witty and entertaining blog** previously you will be aware of her reviews. I normally skim right over them, vaguely disappointed that I wouldn’t get to hear some humorous tale from her life without actually having to phone etc. Today she has passed us these lovely toys to look at though so obviously no skimming from readers.

Immediately my son pounced on the fishing boat, which was so appealing that you get the urge to stroke it and raise it to pole position in the toy rankings. It is a neat, well made design with masts adapting to become fishing rods and 9 little fish stowed away ready for the hooking when bath time comes, all watched over by a trusty fisherman.

“Make water in the lounge, Mummy!” I love the God-like expectations my children have of me. One soggy rug later they were really happy fishing together and it occupied them for quite an impressive amount of time. I was really taken by the bright, retro design of the boat and it’s appeal to different age ranges. With different levels of play it would grow with a child from baby onwards.

We cracked on next with the ‘Animal Soundtracks’ board game. This is a very simple idea made slightly more interesting by having a CD to play along to. Based on the principles of bingo, you have a board with nine pictures of different animals on it. You play the CD at a random point and if you hear an animal noise that corresponds to your board you cover it with a token. First one to get all nine covered wins.

Shunning the enclosed booklet, I thought it all looked easy enough and played the CD. A noise like high pitched drilling rang out, blank faces all round. “Right”, I said, let Mummy just have a little look at the instruction book….” Cocky no longer, I familiarised myself with what track number each animal was and then play resumed. It was a great game which the children really enjoyed, I’d say it was perfect for the suggested age range of 4-8 but any age would like playing it at least once and realising that they were not quite so familiar with natures sounds as they had hoped. They haven’t been begging to play it again but we will definitely be giving it another go and at less than £7 it’s a good value gift.

Connecta Straws…. Who doesn’t want to have wholesome fun with straws? I’m sure we had these at my primary school and this is exactly the sort of toy I expect from Galt. My son was really keen to play with these and it is as simple or as complicated as you want it to be. You get 200 straws and connecters as well as wheels and building rings. There was a leaflet of potential designs you could try and recreate, such as a helicopter or the desired horse and cart. Once open though, my son and daughter opted for their own ‘custard, water squirter’ design which kept them occupied through dinner. 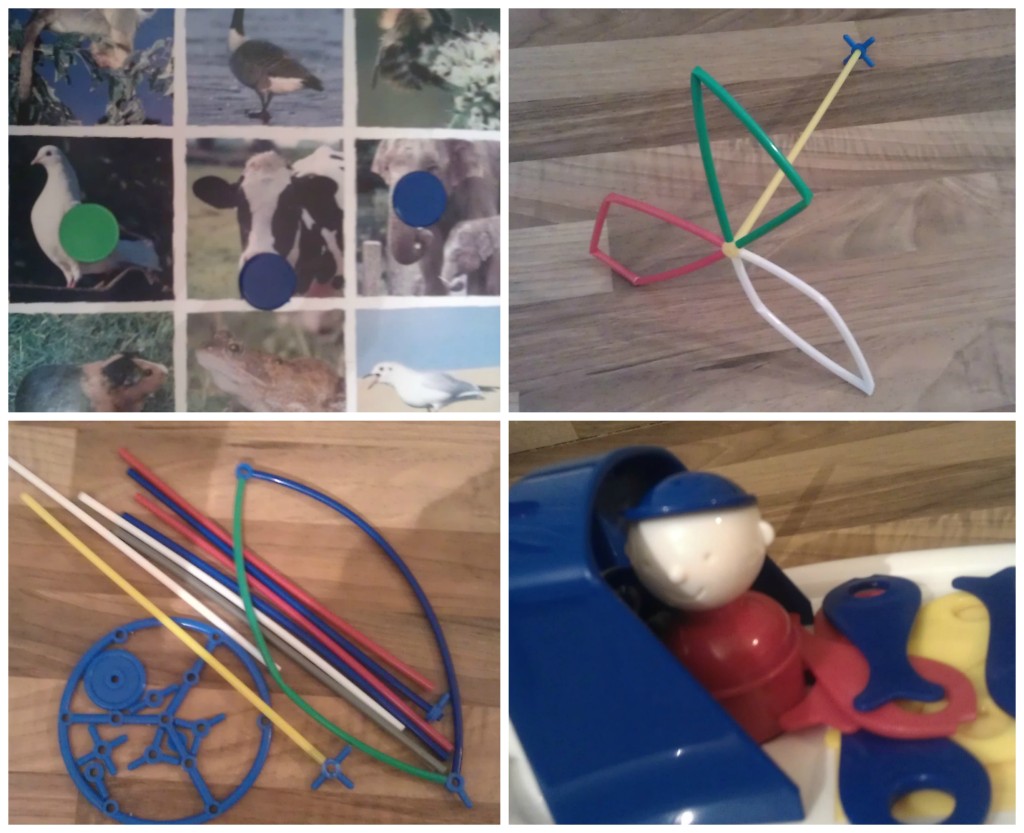 This is what I liked the most about the straws, it allows children to use their imagination and actually physically get their hands involved with something. I think I am harking back to a time when a bouncing ball on a screen was the height of computer entertainment and we had to physically stand-up and push buttons on electrical appliances to get them to work but I liked it.

This could also be the worst thing about it though, it is straws…just straws… and for modern children, initial interest might not be held for long enough, less fun than other construction toys, it is harder to achieve a good looking structure with them. I, though, was sold, and with three ‘windmills’ filling my dining table I was very proud of my Connecta Straw windfarm. Again, like the boat, this will grow with the children and enable them to develop their imagination and design as well as fine motor skills and does have something for everyone.

So, quite impressed by Galt – not just crayons, lots of lovely things to stimulate little minds and provide entertainment without a touchscreen in sight.

*I was provided the toys but all comment is my own unbiased opinion.
** Apart from this one, we all know how much she needs praise.