Did you know that we are now in the Chinese year of the horse? People born in the year of the horse are meant to share characteristics with the animal – things like high energy levels, independence and a love of being in a group rather than massive teeth and a fondness for polo mints.

I was actually born in the Chinese year of the horse, so decided I should probably look into it a bit more.

“Energetic, good with money and very fond of travel,” I read, “Horses are the nomads of the Chinese Zodiac, roaming from one place or project to the next. All of this Sign’s incessant activity and searching may be to satisfy a deep-rooted desire to fit in. Paradoxically, Horses feel a simultaneous yearning for independence and freedom. Horses crave love and intimacy, which is a double-edged sword since it often leads them to feel trapped. Love connections tend to come easily to Horses, since they exude the kind of raw sex appeal that is a magnet to others.”

I do exude a raw sex appeal, that’s very true. Especially in these slippers.

“This Sign possesses a sharp wit and a scintillating presence,” I read on, feeling pretty pleased with myself, “it really knows how to work a crowd. Surprisingly, Horses tend to feel a bit inferior to their peers, a misconception that causes them to drift from group to group out of an irrational fear of being exposed as a fraud.”

“The lone wolf inside the Horse can at times push others away, but this also makes this Sign stronger and is a key to its success. Horses are self-reliant and, though they might lose interest fast in a tedious, nine-to-five day job, are willing to do the work necessary to get ahead. Horses tend not to look much at the big picture; instead they just follow their whims, which can result in a trail of prematurely ended relationships, jobs, projects and so on.”

I also did a bit of research to see how Boyfriend and I should get on, according to Chinese Astrology. He is a rabbit.

“The Horse and the Rabbit may have to put some work into maintaining a mutually satisfying relationship,” I read, “and that work is more likely to be done by the Rabbit than by the Horse. [Sorry about that Boyfriend]. The Rabbit, by nature, tends to idealise relationships and often puts in more energy than its partner. This is a very compassionate and understanding sign, though, qualities that might work especially well with the Horse, whose caprice and inner conflicts can be rather confusing for others. The Horse’s penchant for changing its mind in a split second often works against relationships, both platonic and amorous. The Horse is a lot of fun to have around — it’s an intelligent, witty and sexy sign — but often doesn’t stick around for long, always feeling the need to move on to greener pastures.”

Others have found my caprice and inner conflicts rather confusing, so a pat on the back for Boyfriend for maintaining his compassion and understanding for so long.

Anyway, enough of my fickle insecurities…

As I had managed, as I do every year, to fall asleep before midnight on December 31st we thought we’d have another go at celebrate Chinese New Year instead. We didn’t dress up as dragons or stay up until midnight or anything, but we did get Chinese take away from hungryhouse, hang a few decorations about and have a go and creating our own rainbow designs on some scratchable Chinese lanterns.

Ordering takeaway from anywhere new is always a bit scary, but we checked out the reviews, plumped for somewhere nearby and were very pleased with the result; the king prawn balls were especially delicious. While I followed my whims, flitting every minute from one dish to another, the chicken satay lying neglected as I abandoned it in favour of spring rolls, Belle concentrated on the lanterns and did an excellent job. (Interestingly Belle is a horse too, so pure chance that she managed to stay focussed for long enough to finish it.) 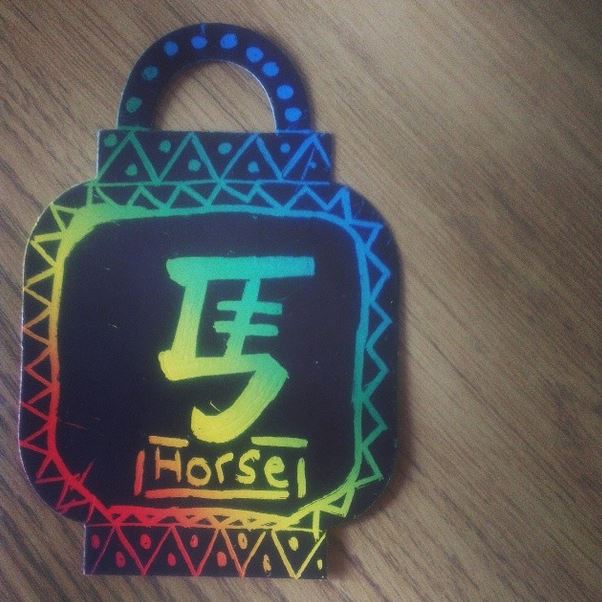 At the end of the meal we also had fortune cookies. I’m pretty sure I’ve never actually had a fortune cookie before, so that was jolly exciting. There was no engagement ring in mine, which I had thought was the point of them, but I did have a fortune. Apparently new doors will be opening up to me this year and I should seize new opportunities.

I just need to keep a hold of them and not drop them as soon as something new and shiny comes along.

Disclosure: hungryhouse gave us a voucher towards the cost of our meal in return for me baring my inner most insecurities. A fair exchange? I’m not sure. The king prawn balls were tasty though.