I’ve always said I’m more of a biscuit than a cake person.

I know, controversial, but I’ve just never bought into that whole ‘I’m a woman and therefore I love cake’ storyline. Getting a slice of cake will not entice me to your event. I will not make a guilty looking face and say ‘ooh go on then, just a small bit’, like I don’t really deserve it but I’m going to ‘treat myself.’

If I want to eat something then I will eat it and I will enjoy it, I won’t be part of a weird female subcultural that defines itself by sweet treats.

I’m not sure where that feminist cake rant came from. But also I don’t apologise.

I’m not saying I hate cake or anything, that would be an unusual way to introduce a post about cake, I’m just saying I prefer cookies. Or bourbons. God I love bourbons. I’ve even made homemade bourbons such is my love for them. If I could sit somewhere sunny with a packet of bourbons, a good book and a cat on my lap, fur warm from the sun, I reckon I’d be about as happy as it’s possible to be without being on a brunch date at a cat café with Reese Witherspoon.

So my idea was this – make a cake, but disguise it as a giant bourbon biscuit. Trick my subconscious into thinking I was eating a huge bourbon, when actually it was a light and fluffy sponge. Genius right? And why stop there? When I started diving into the idea of cakes that looked like other things, I even discovered amazing things like this fast food cake from agnes de sucre. A cake that looks like burger and fried chicken? I’m in.

Back to my bourbon cake – did I manage to trick myself? Sort of. Not really. But it looked awesome so it was totally worth it. 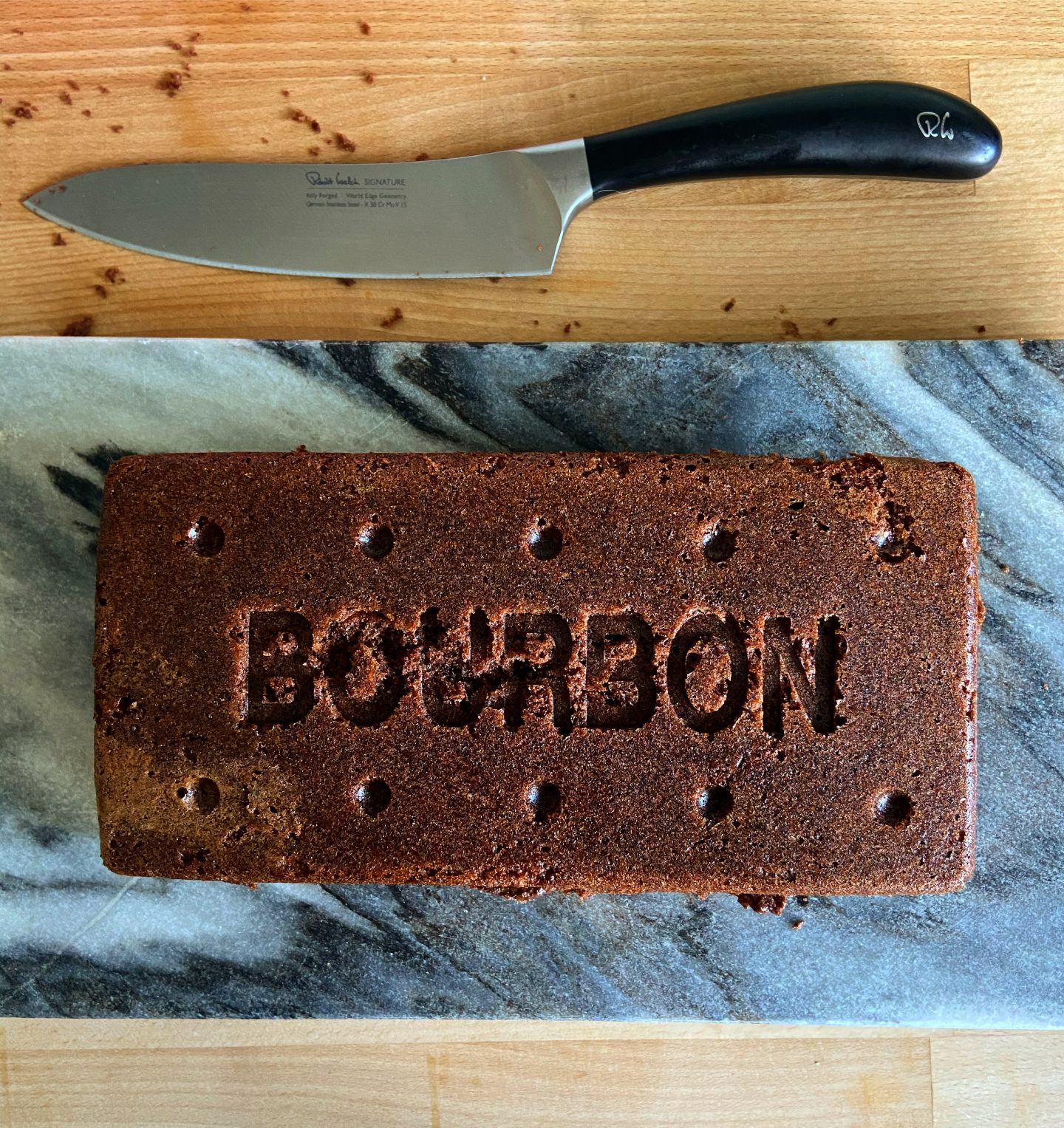 How do I make a giant bourbon cake?

I have to say, very modestly, that I think my giant bourbon cake looks better than the one on the website. I promise I didn’t do any sticking back on of broken off bits of sponge or strategic editing or anything like that. I did some research into silicon cake moulds before I started and didn’t grease it in any way. Apparently the fat within the sponge does that bit. Getting the bourbon cake out of the mould I just went really slowly and carefully. 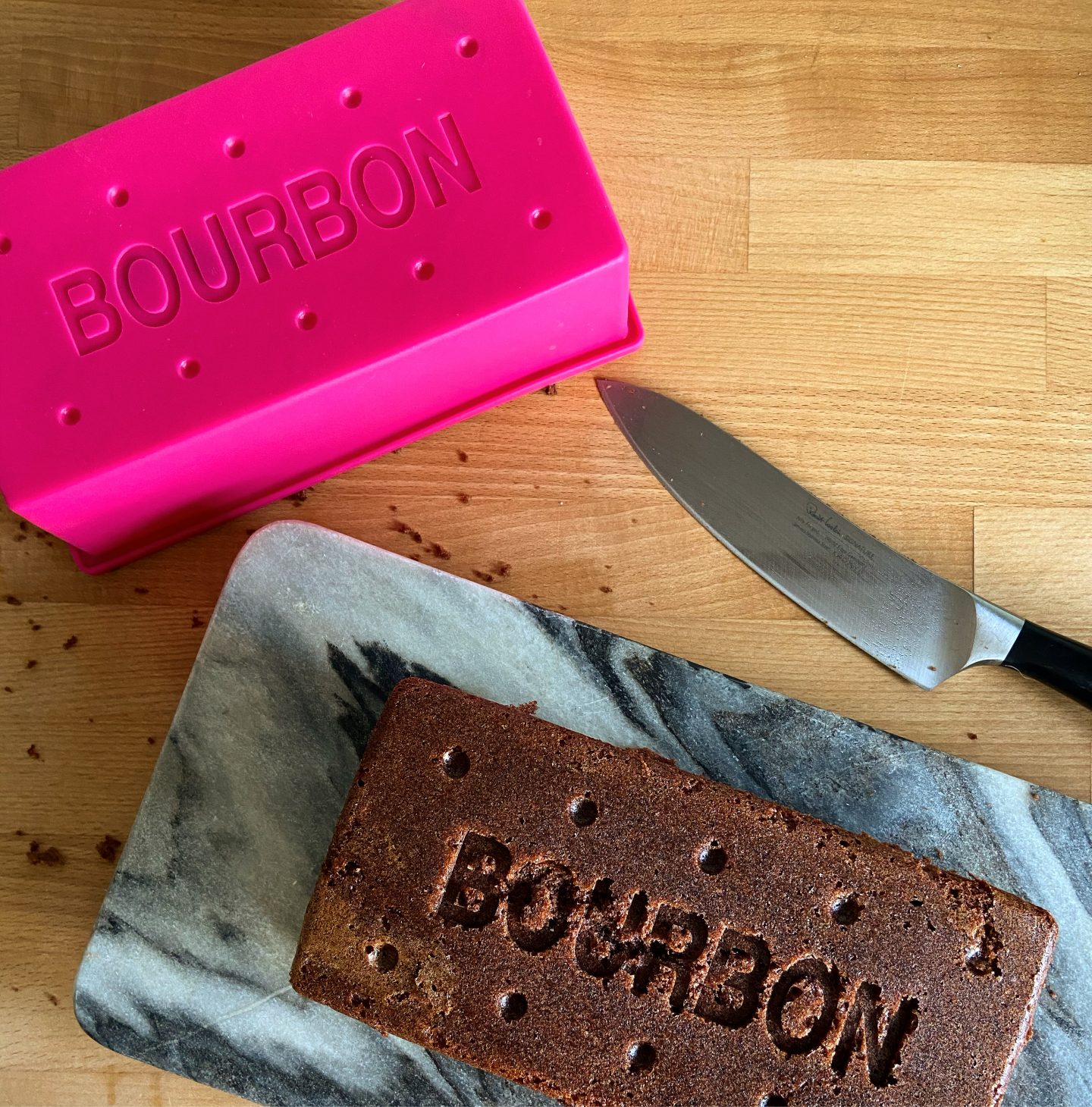 I’d like to impress you with a fancy sponge recipe but to be completely honest I just did the old four ounces of everything one – four ounces each of sugar and butter, creamed, then a couple of eggs, then four ounces of a mix of self raising flour and cocoa. (It was about three ounces of flour and an ounce of cocoa.) I added a teaspoon of baking powder, gave it a final whisk, into the bourbon cake mould, job done.

I cooked it probably for about 20-25 minutes at 180? Until a skewer comes out clean and it’s springy to the touch.

To create an authentic bourbon sandwich vibe I waited for the cake to cool and then sliced it through the middle to make two thin layers. I then made a regular butter icing, with some added cocoa, and threw in a little bit of caster sugar too for texture. You know how the cream in the middle of a bourbon is just the tiniest bit gritty? That’s what I was going for. 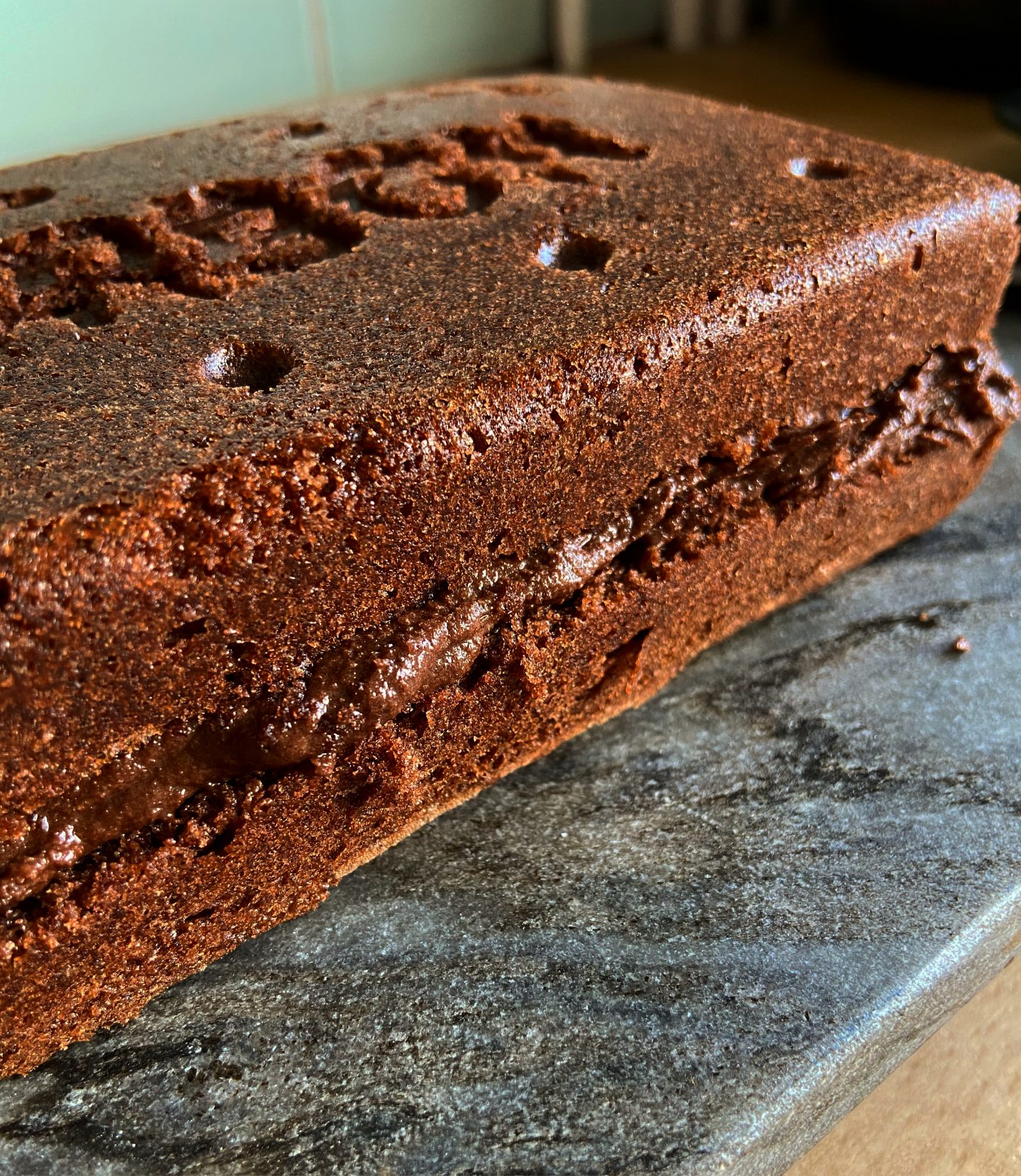 And that’s it really. Making you own homemade giant bourbon cake is definitely not difficult once you’ve got the right equipment. The sponge turned out really well and it was generally very tasty.

Did I enjoy it as much as scoffing a whole packet of bourbon biscuits? No. Did I feel oppressed by the patriarchy as I tucked into my second slice at about 11.15am? Also no.

On balance then, a good day.

Get 10% off your own silicon bourbon cake mould at MoldyFun.com with the code SLUMMYSINGLEMUMMY.

*This is an affiliate link so I will get a small amount back for any purchase you make. I don’t really do affiliate links – they feel like a lot of effort to be honest – but I wanted to write about the bourbon cake anyway so I thought I might as well. Even if I just get enough to buy a packet of bourbons it’s worth it right?