Advertisement feature in association with Belling 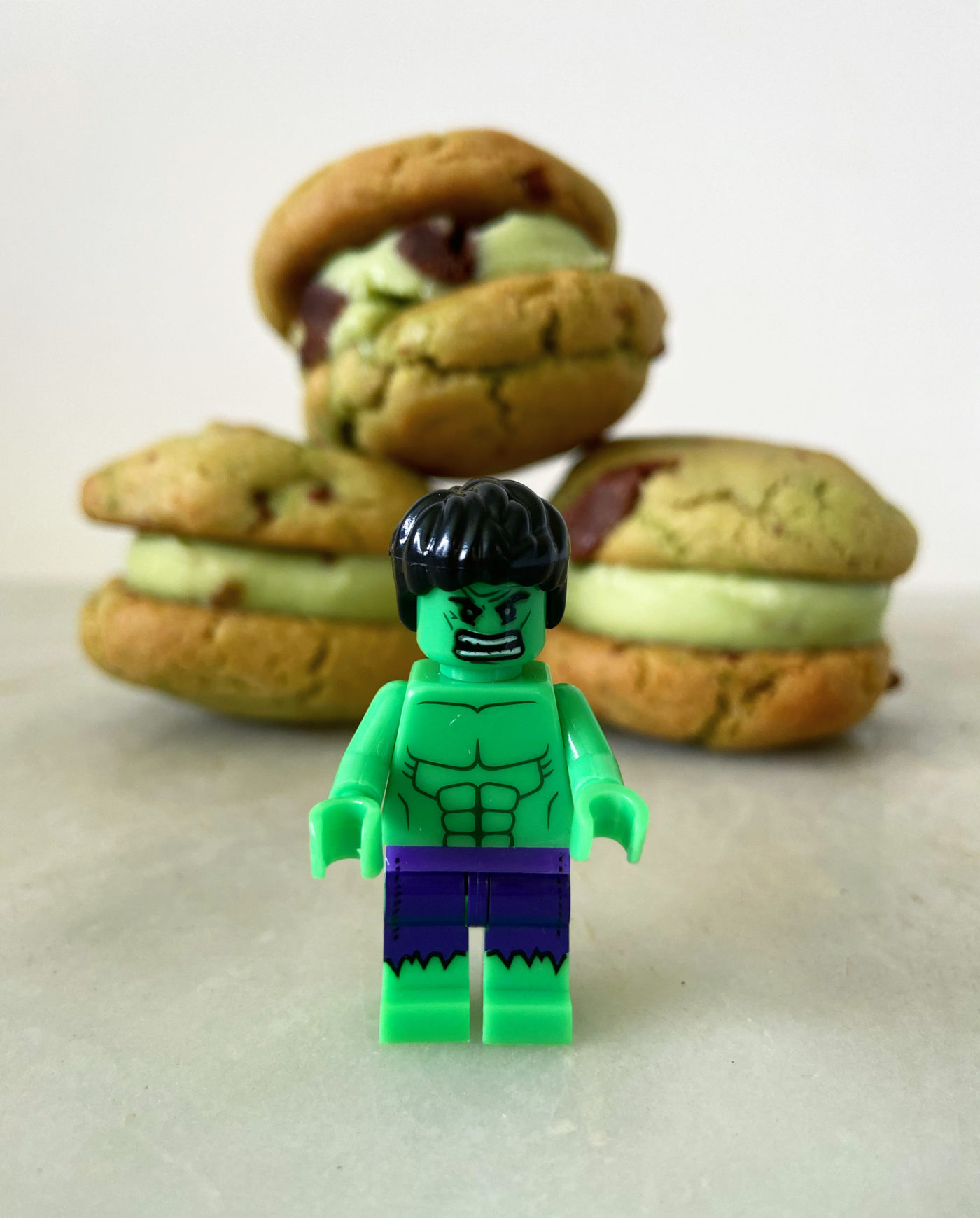 Never let it be said that I don’t enjoy a challenge.

When British cooking appliance brand Belling, who’ve been helping families create tasty, nutritious meals since 1912, asked me if I fancied creating a superhero themed recipe as part of their latest campaign to get kids excited about cooking then of course I said yes.

Belling has actually created an entire recipe book of superhero themed recipes, which you can get completely free here. All of the recipes in the Belling campaign are healthy twists on foods linked to superhero films, including treats like rainbow smoothies inspired by Bruce Wayne’s smoothies in Batman Begins and the picnic sandwiches that Billy Batson enjoys in Shazam.

How hard could it be?

‘How about some Hulk themed ice cream sandwiches made with Hunka Hulka Burning Fudge ice cream?’ I said.

And there I was.

If you’re an Avengers fan then you may already have spotted the extra dimension to my challenge – the fact that Hunka Hulka Burning Fudge is actually a completely made up ice cream flavour. Here’s the Hulk tucking into it in Avengers: Endgame:

It’s not exactly clear what flavour it is, other than that it’s green and has bits in.

Of course if you’re going to make ice cream sandwiches then you also need something to sandwich the ice cream in – namely cookies. I decided on green for these too. (You see where I went there with the Hulk theme right?)

Although I did create a fair bit of work for myself making the ice cream from scratch, it was definitely satisfying, and fun too. If you wanted to shortcut then you could easily use shop bought mint choc chip ice cream for a similar effect and just make your own green cookies. (Where would be the fun in that though?)

As you’ll see, I also had a bit of a tiny Hulk versus giant Hulk battle going on*, which made the whole thing extra fun. Giant Hulk obviously has size on his side, but tiny Hulk has stealth and cunning. Who will win the ice cream sandwiches?? 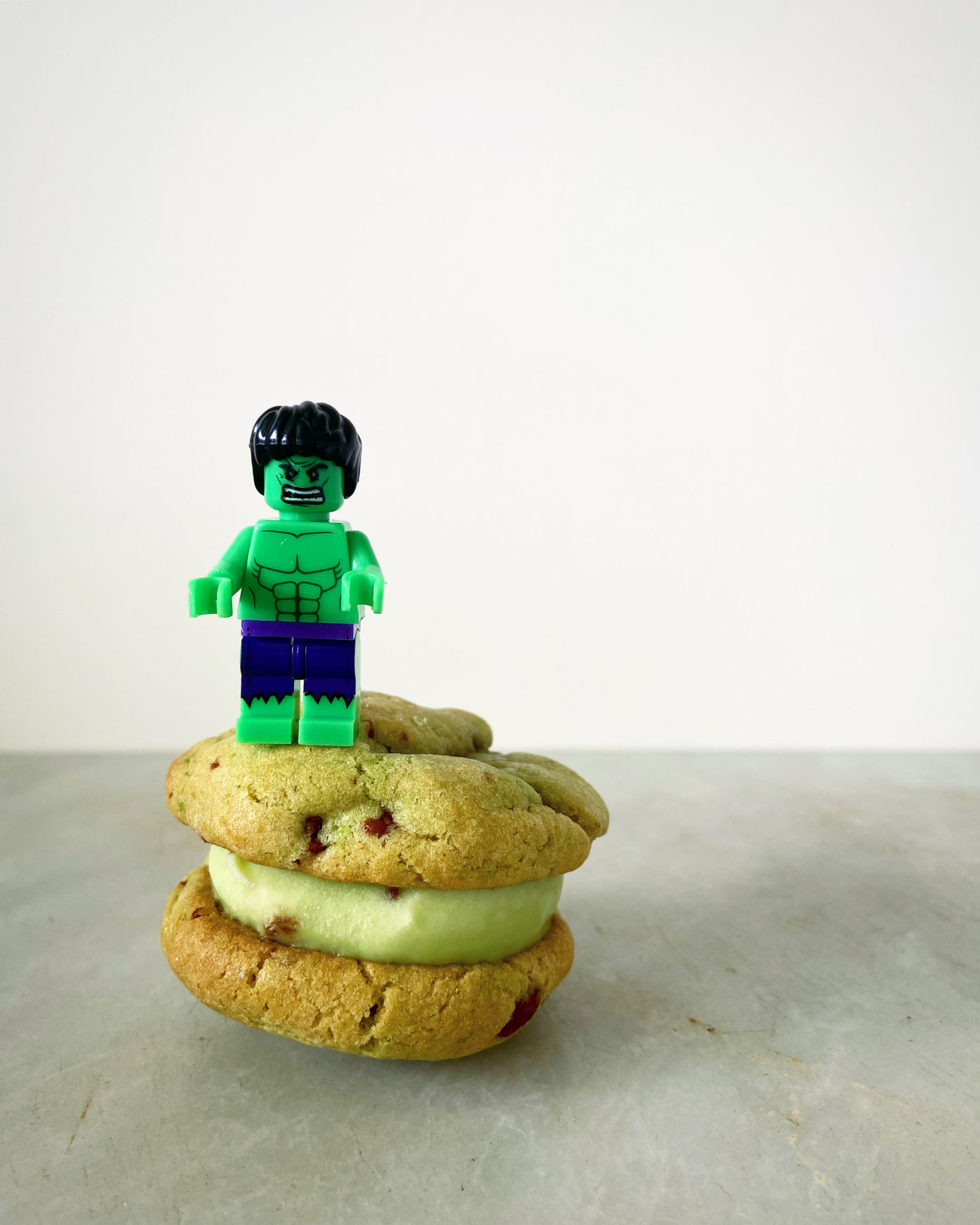 Tiny Hulk stakes a claim early in the game

I used a basic vanilla ice cream as the base for my homemade Hunka Hulka Burning Fudge ice cream, coloured with green food colouring. My top tip with vanilla ice cream is not to scrimp on the vanilla flavouring. It’s the key flavour after all, so splash out on some decent vanilla extract. You could use peppermint flavouring if you wanted to, and make mint ice cream instead, it’s totally up to you.

For the fudge element, I incorporated cut up pieces of chocolate fudge brownie. I bought the brownie, but you could make this yourself too if you wanted to be a real show off.

For the Hunka Hulka Burning Fudge ice cream you will need:

In a medium saucepan, beat the egg yolks and sugar until smooth. In another saucepan, gently heat the milk until it just starts to simmer, without stirring. Gradually add the milk to the egg and sugar mixture, stirring as you go to keep it smooth. Heat the mixture gently, but don’t let it boil – it needs to get to about 75 degrees.

Decant into a jug and refrigerate for at least an hour but ideally longer. The colder it is the better it will churn. Once it’s chilled, mix in the cream and vanilla and let the ice cream maker do its job. Add the brownie pieces about halfway through churning.

To help with the sandwich making, we then transferred our Hunka Hulka Burning Fudge ice cream into a large, shallow tin so that the ice cream was about 2 cm deep. This means you can cut discs out of it with a biscuit cutter, which is much easier for ice cream sandwiches than trying to scoop out ice cream and squidge it between two biscuits. Store your ice cream in the freezer. 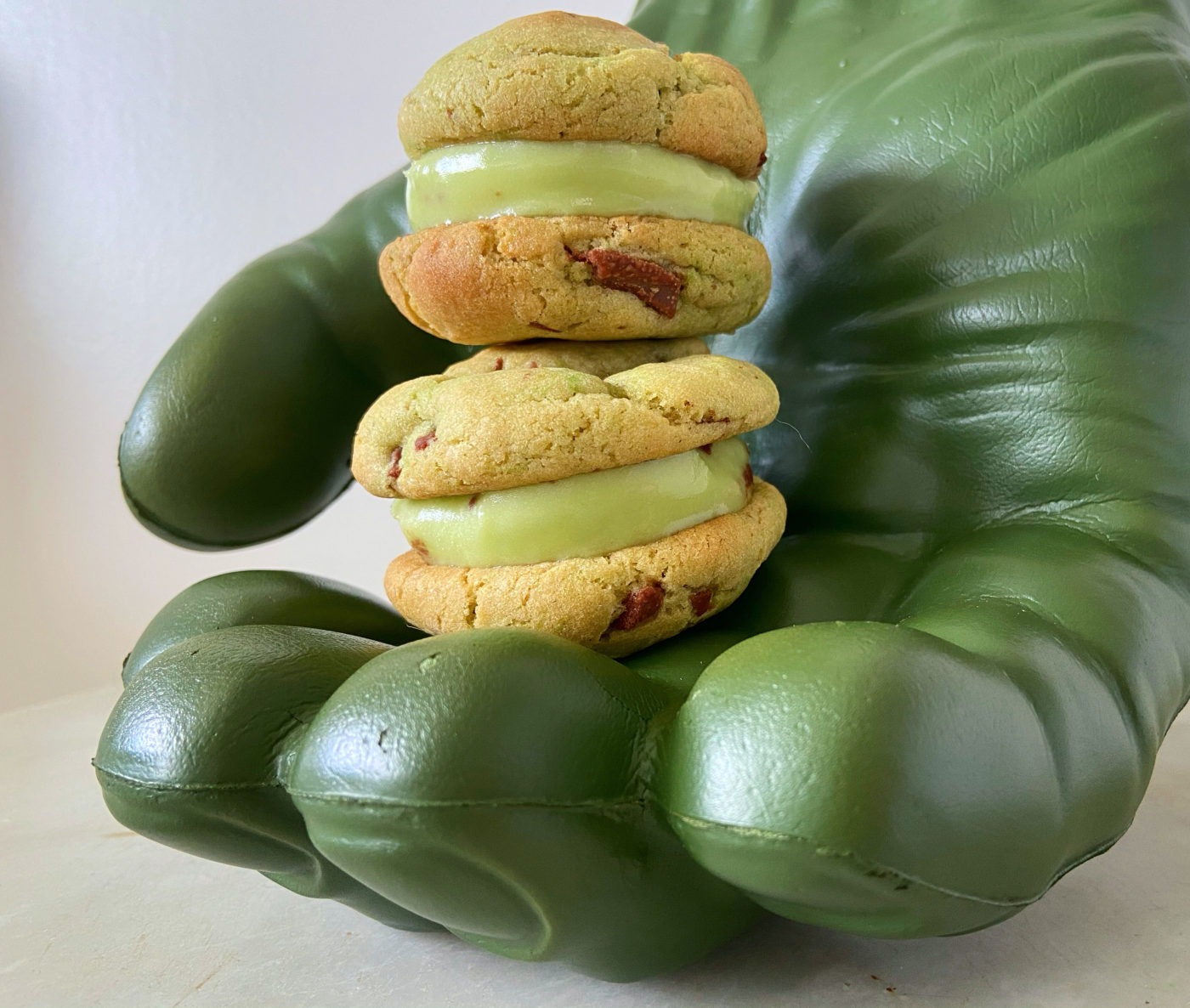 Giant Hulk nabs himself a couple of ice cream sandwiches

Preheat the oven to 200 degrees and grease two baking sheets.

Cream the sugar and margarine until light and fluffy, then add the egg, vanilla extract and food colouring. (You can add more of this depending on how green you want your cookies. Keep in mind that some food colourings do lose some of their colour during cooking.)

Beat well. Add the flour and salt and mix until you form a soft dough, then add the chocolate chips.

Break off walnut sized pieces of dough and form into balls. Space these out on the baking sheets and cook for around seven minutes. Leave to cool completely.

To assemble your Incredible Hulk ice cream sandwiches, use a cookie cutter the same size or slightly smaller than your cookies to cut out circles of Hulka Hunka Burning Fudge ice cream and sandwich between two cookies. 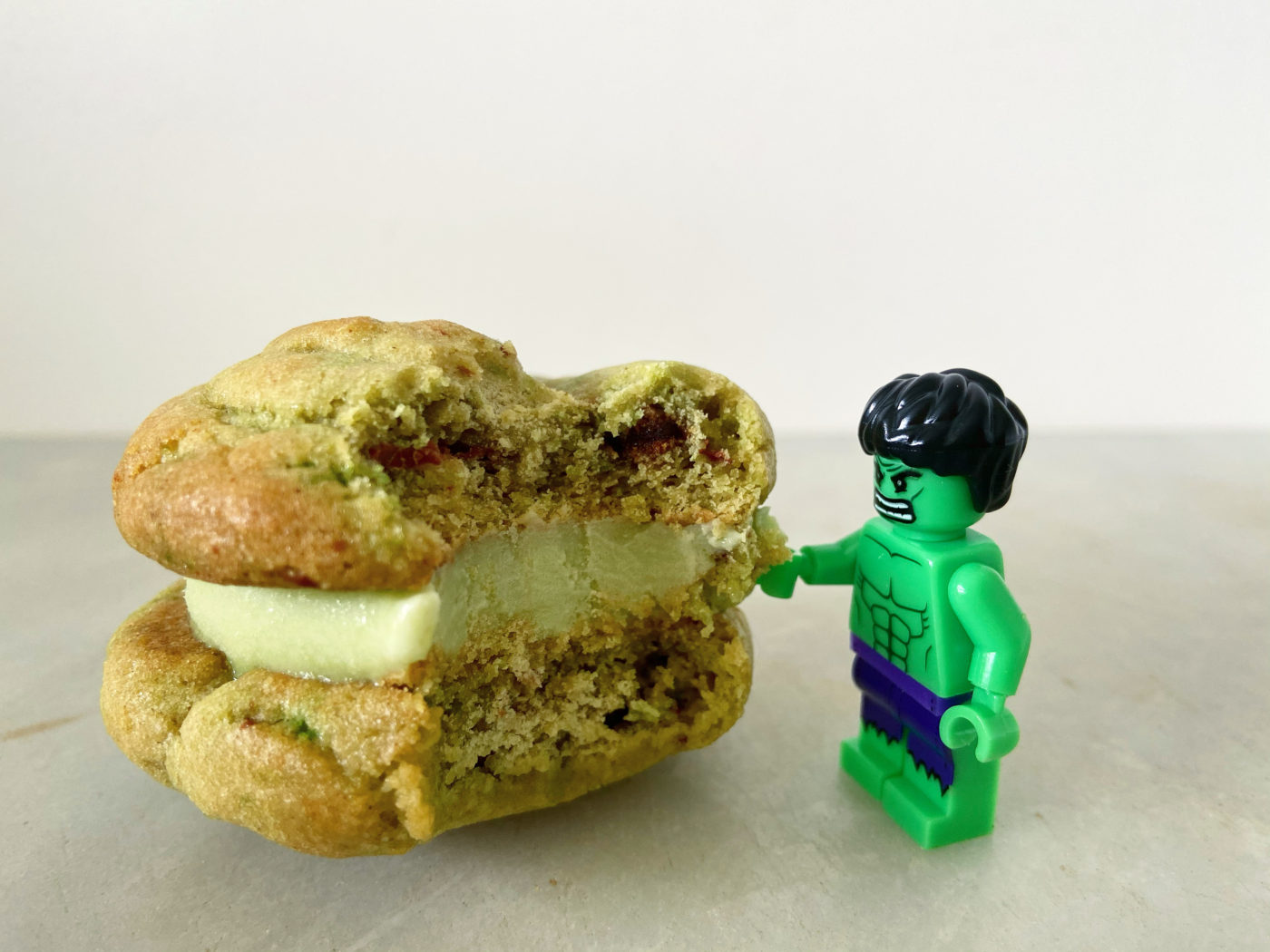 Store in the freezer in an airtight container if you’re not eating them straight away. The ice cream sandwiches can be eaten straight from the freezer.

And that’s it! That’s all there is to making your very own Hunka Hulka Burning Fudge ice cream sandwiches. If you enjoyed this, you might like the chocolate dipped strawberry yogurt lollies I made with Belling last year, which you can find here.

Get a copy of Belling’s superhero cookbook and get your kids excited about cooking. 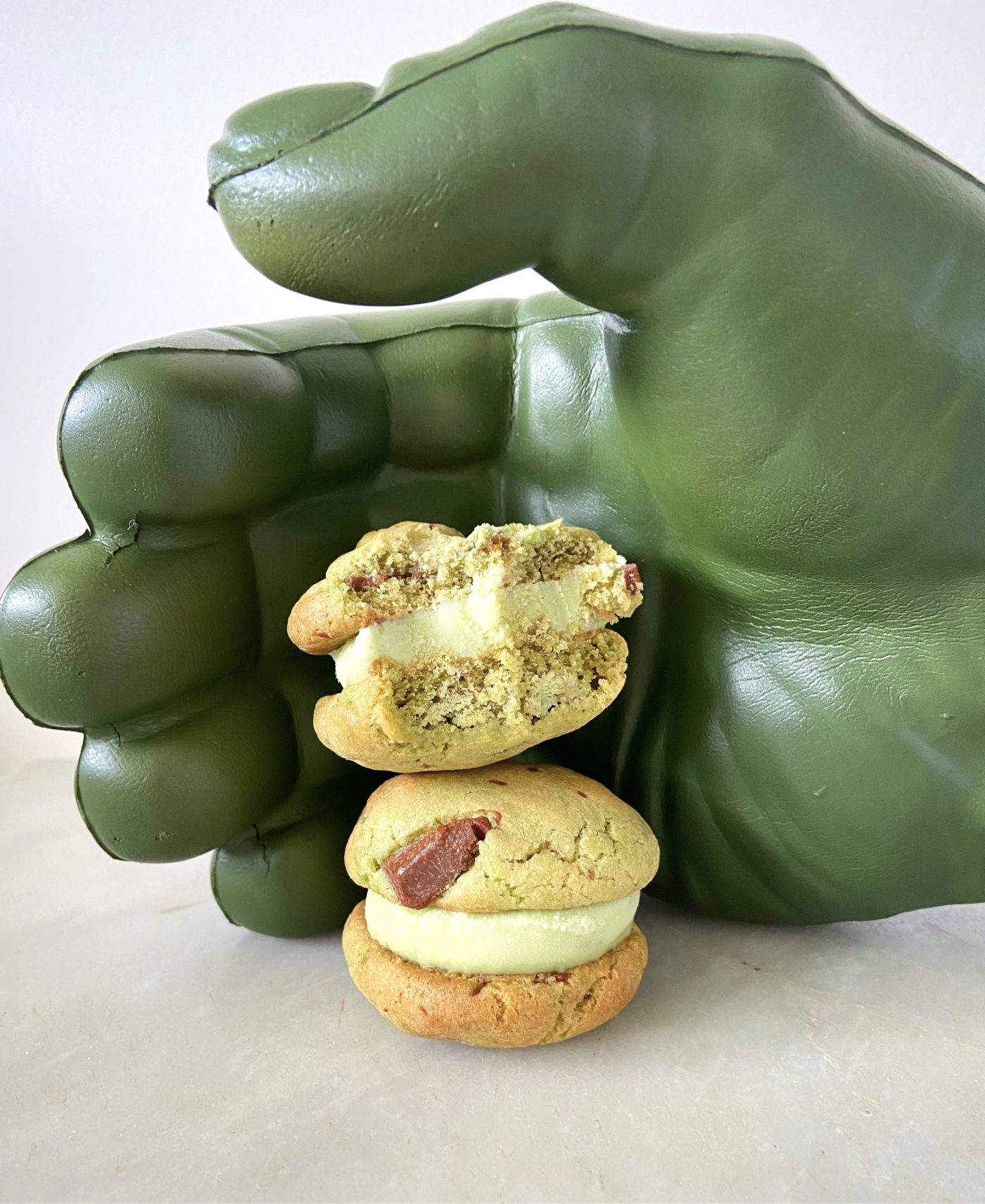 Giant hulk snatches the sandwiches at the last minute

*Yes, I did buy giant Hulk hands just for this post. That’s commitment right there people. That’s going the extra mile. I mean yes, they were only £1.50 at a car boot sale, but that’s hardly the point. My lovely new boyfriend supplied tiny Hulk. He didn’t cost me anything. (Boyfriend OR tiny Hulk.)