There are a lot of things Belle doesn’t like – courgettes, food that’s been near courgettes, balloons, fireworks, other people – but when she likes something, she really likes it. Two things she likes happened on the same day last week when we went for a night away at Solent Hotel and Spa in Fareham, near Southampton. 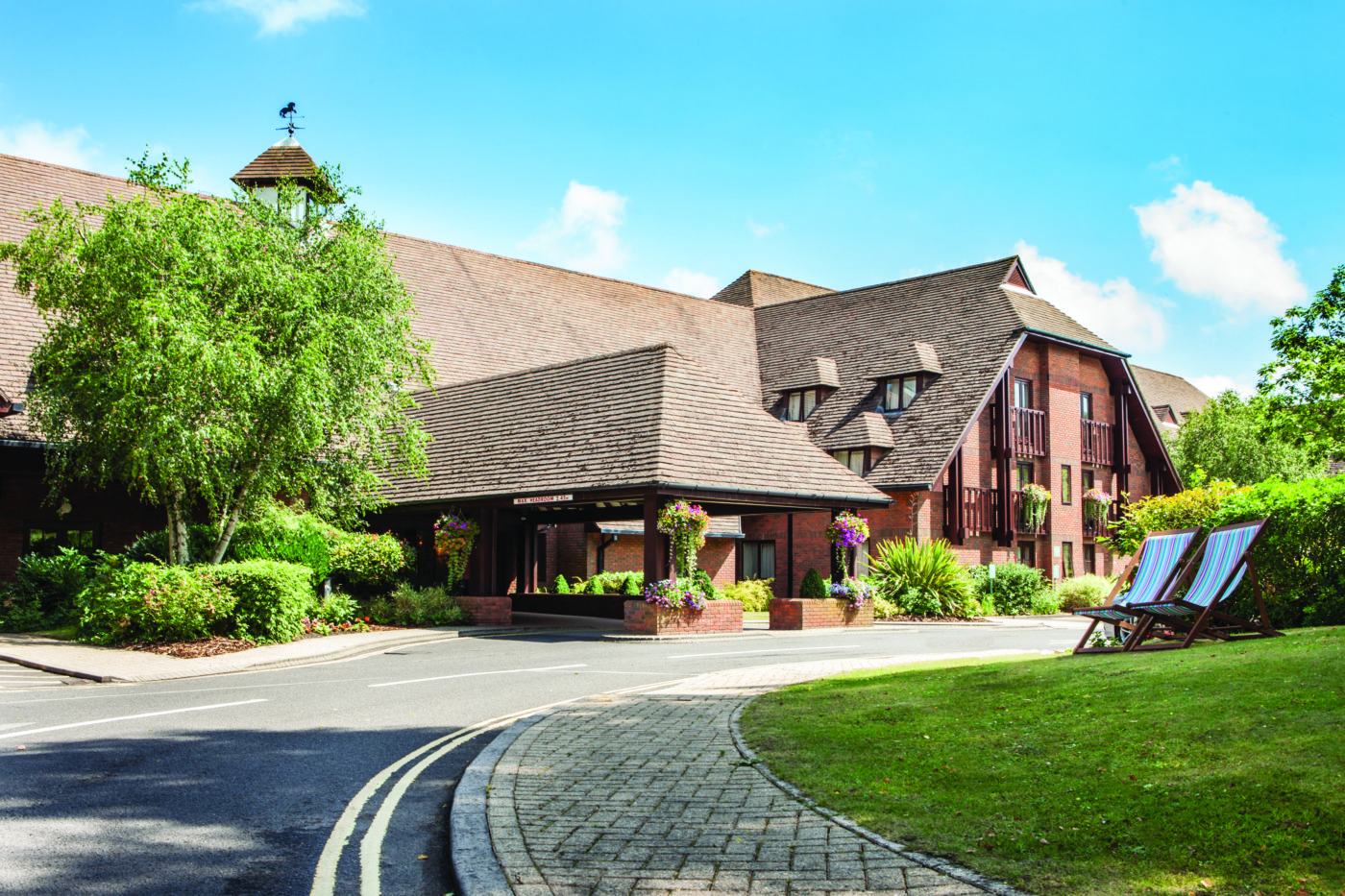 The first was a back massage. You might be surprised that Belle likes a back massage given that being touched or too close to people is one of the issues that comes with her sensory processing disorder, but actually having that kind of firm pressure contact can have a very positive effect on her. She likes tight hugs (from me) and she sleeps every night with a weighted blanket, so I guess it’s a similar sensation.

A back massage where you only have to wander down from your hotel room in what might well be the comfiest robe known to mankind, (she begged me to buy it to take it home), is even better as there’s no need to even go outside. (‘Outside’ is on Belle’s ‘do not like’ list.)

The Solent Hotel and Spa has the classic pool, sauna, steam room, jacuzzi set up, as well as a separate area for treatment rooms, plus a gym. I’ve never really understood people who go on holiday and go to the gym, but each to their own I guess. Everything was very clean and although the hotel seemed busy, I never saw more than about half a dozen people in the pool area at any one time, so you had that lovely relaxed, exclusive feel. 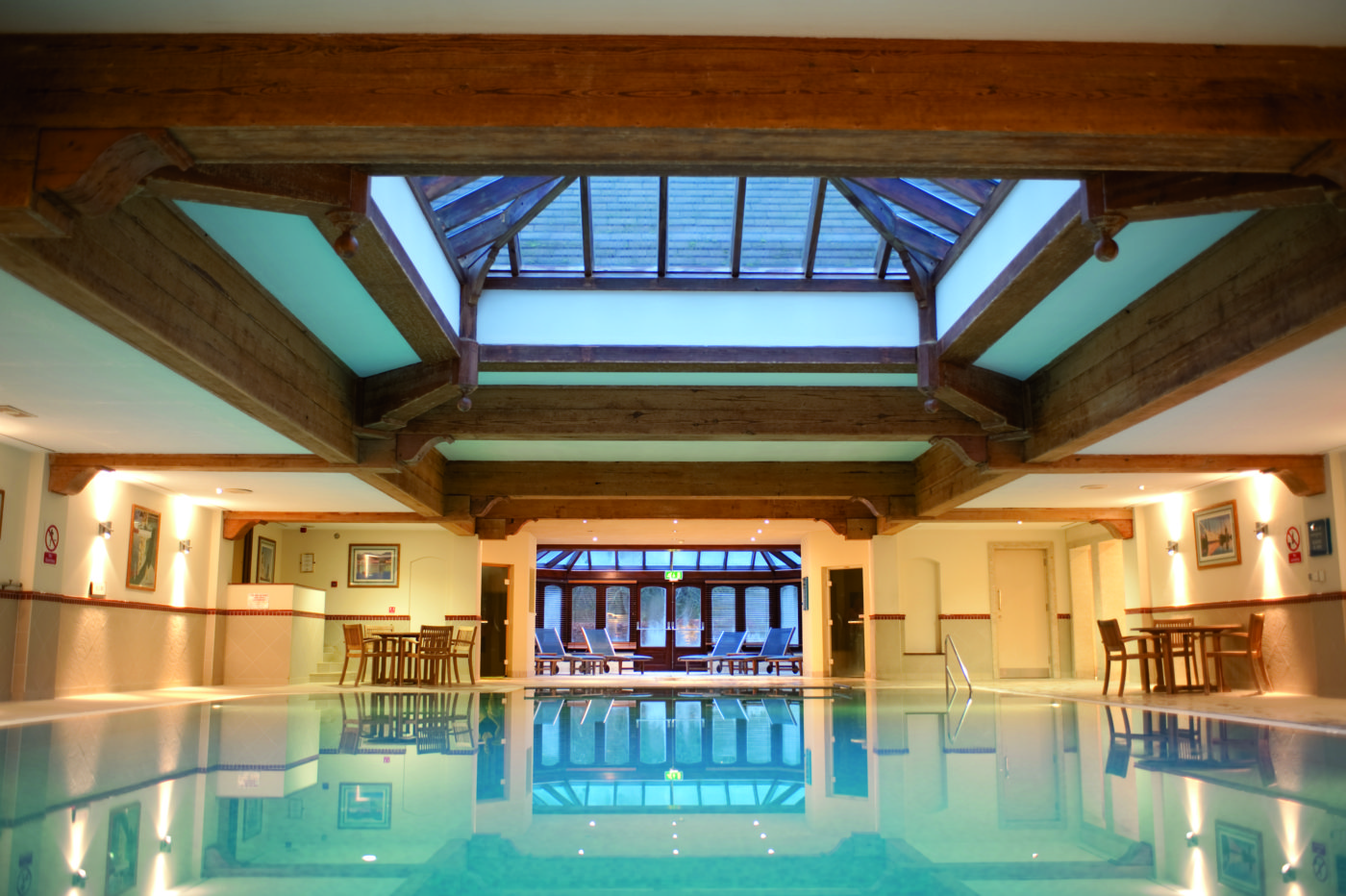 Belle’s second highlight came when she found a note in our hotel room informing her that there was a cold water dispenser on each floor. An empty glass carafe was in the fridge and she immediately ran off to find the water machine. If there had been an ice dispenser she would have pretty much been living her best life. When we went to Florida last year she was always asking me if I wanted any ice, just so that she had an excuse to go and use the machine.

Alongside the carafe in the fridge we also found some fresh milk to use in our teas and coffees, which is one of MY best hotel things. I take a lot of milk in tea and coffee and always use up all the rubbish cartons in one go. UHT milk is NOT a luxurious experience.

This was our room by the way. It was really lovely and spacious, with a great bathroom with a massive mirror and very powerful shower. 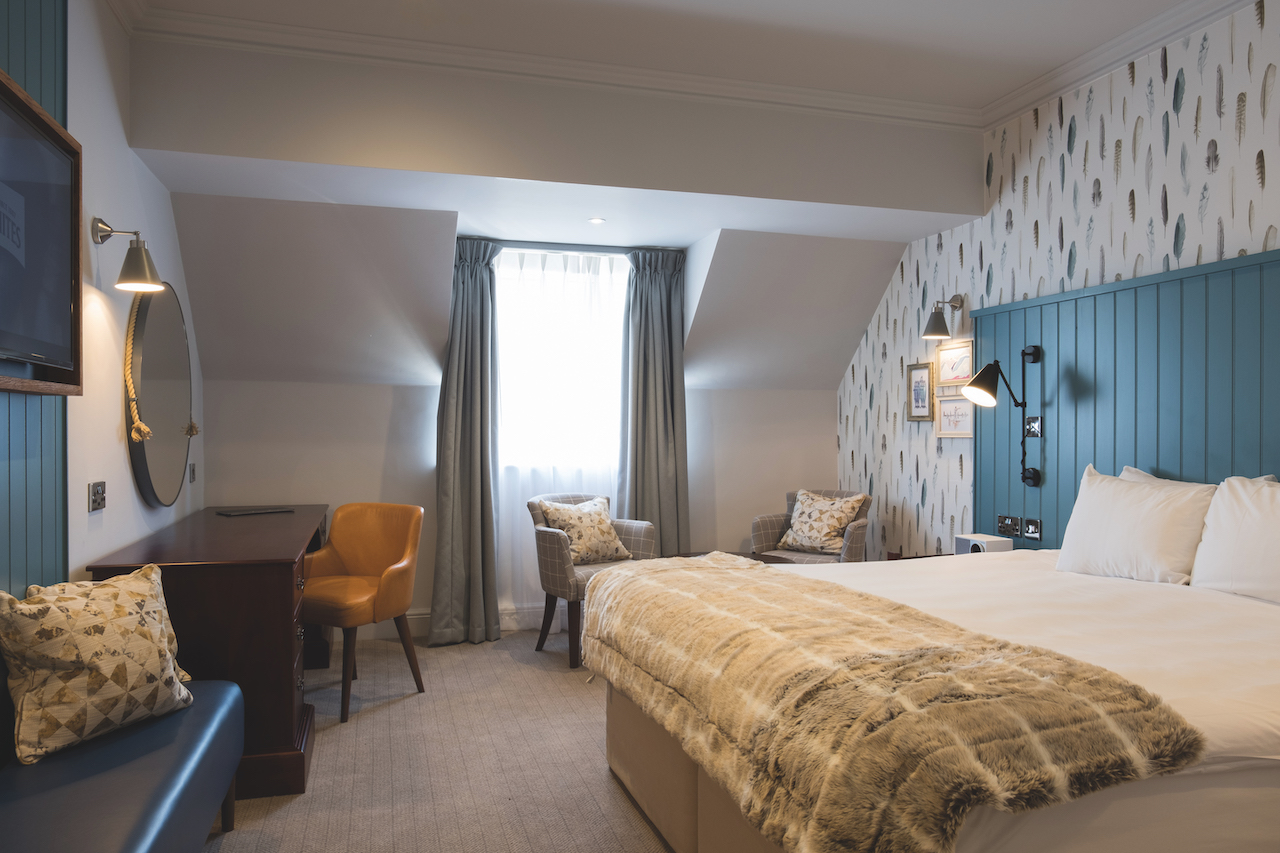 I really liked the decor, especially the feather wallpaper. The beds were very comfy and there was air conditioning too, which is always a plus as both Belle and I like to sleep in really cold bedrooms and hotels can sometimes be a bit stuffy. We actually both slept really well, which doesn’t often happen away from home. It was definitely helped for Belle by the fact that the Solent had a pillow menu and she was able to ask for memory foam pillows instead of feather. (Another tick from Belle.) 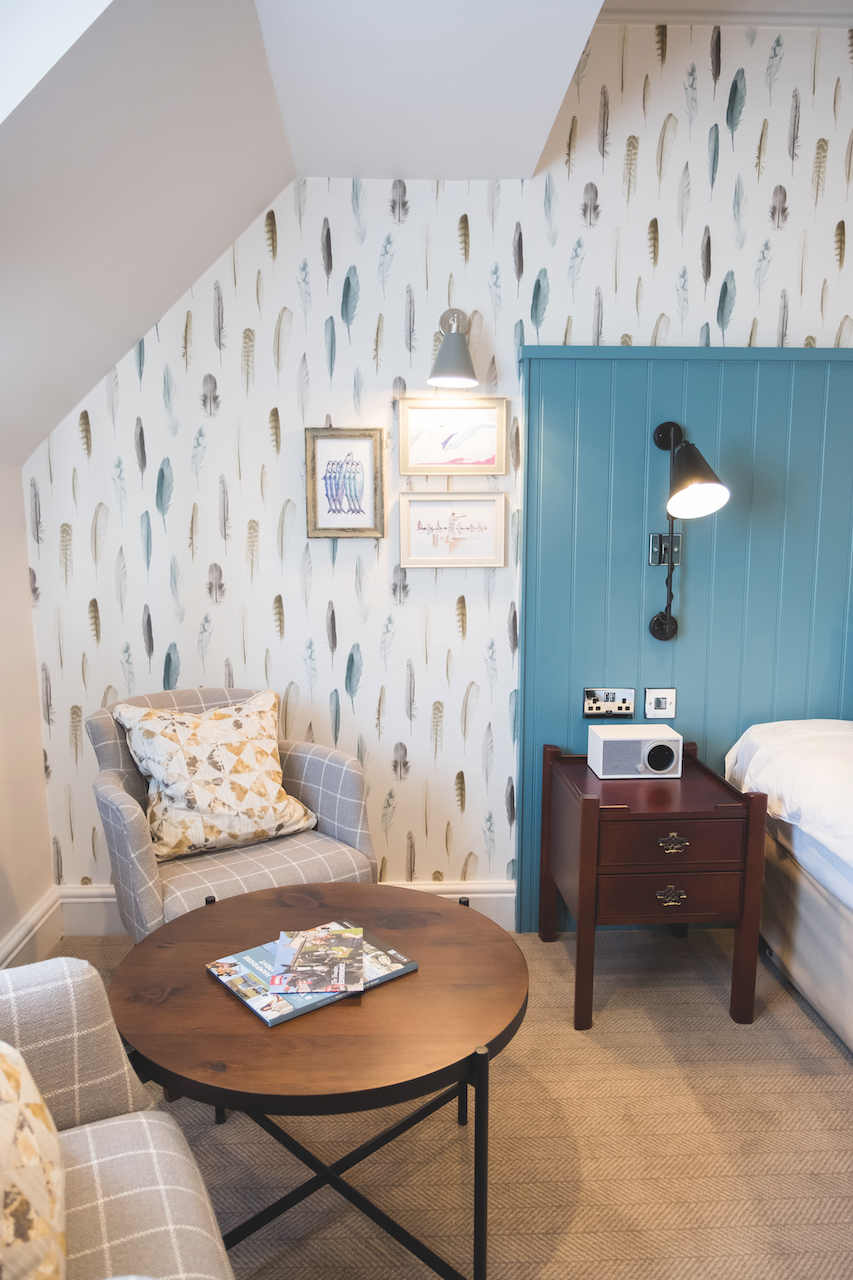 After we’d chillaxed in the spa, filled the carafe with chilled water and made a cup of coffee with fresh milk, (i.e. HAD ALL THE FUN), we got showered and dressed and headed down for dinner in the restaurant.

This was definitely busier than the spa but then a restaurant needs a bit of a buzz doesn’t it? The food was excellent and I was interested to check out the ‘chef’s table’, which is essentially a fancy buffet that you can choose to have as either a start or a main course instead of ordering off the menu. This is a really nice idea as it means you can pick out exactly what you want and keep waste to a minimum too. 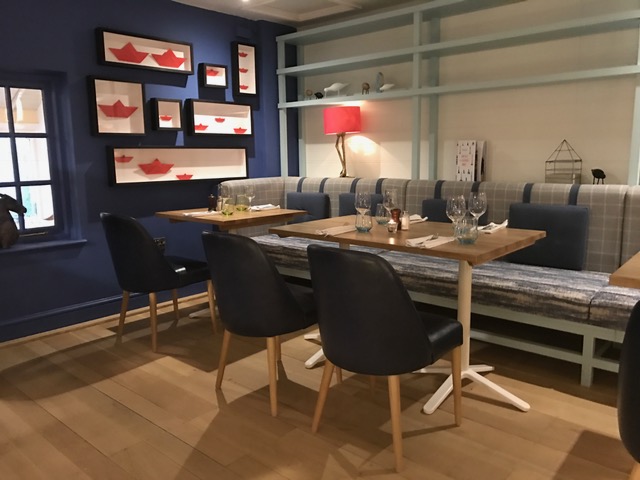 Extra marks came from Belle for the fact that they served churros as a dessert, (the points keep stacking up don’t they?), and actually I was really impressed with the whole dessert menu. The puddings can often feel like a bit of an afterthought in restaurants, which is a shame as they are never an afterthought with me, but there were some cracking options at the Solent – summer pudding with clotted cream, baked rice pudding with grilled figs, grilled thyme peaches with Greek yogurt and honey – the dessert menu had it all going on.

Back in our room, and in the robes, (I was seriously thinking of buying us one each at this point), I felt that lovely level of fullness where you’ve had a big meal and a glass of wine, but not stuffed yourself into a state of shame and regret. We flicked through the TV guide and found the Hangover Part 3 and the next couple of hours passed in a very pleasant, sleepy, relaxed state, lying on the bed and generally feeling good about the world.

The next morning Belle was still too ‘relaxed’ to quite make it far as breakfast, but I went anyway and managed to squeeze in some scrambled eggs and tomatoes. And maybe some mushrooms. And some baked beans. And a couple of coffees. You can’t NOT have breakfast in a hotel can you? Even if you ARE still full from the night before.

Overall then, thanks to the attention to detail and the extra home comforts at the Solent Hotel and Spa, we had a really lovely night away and would happily recommend. 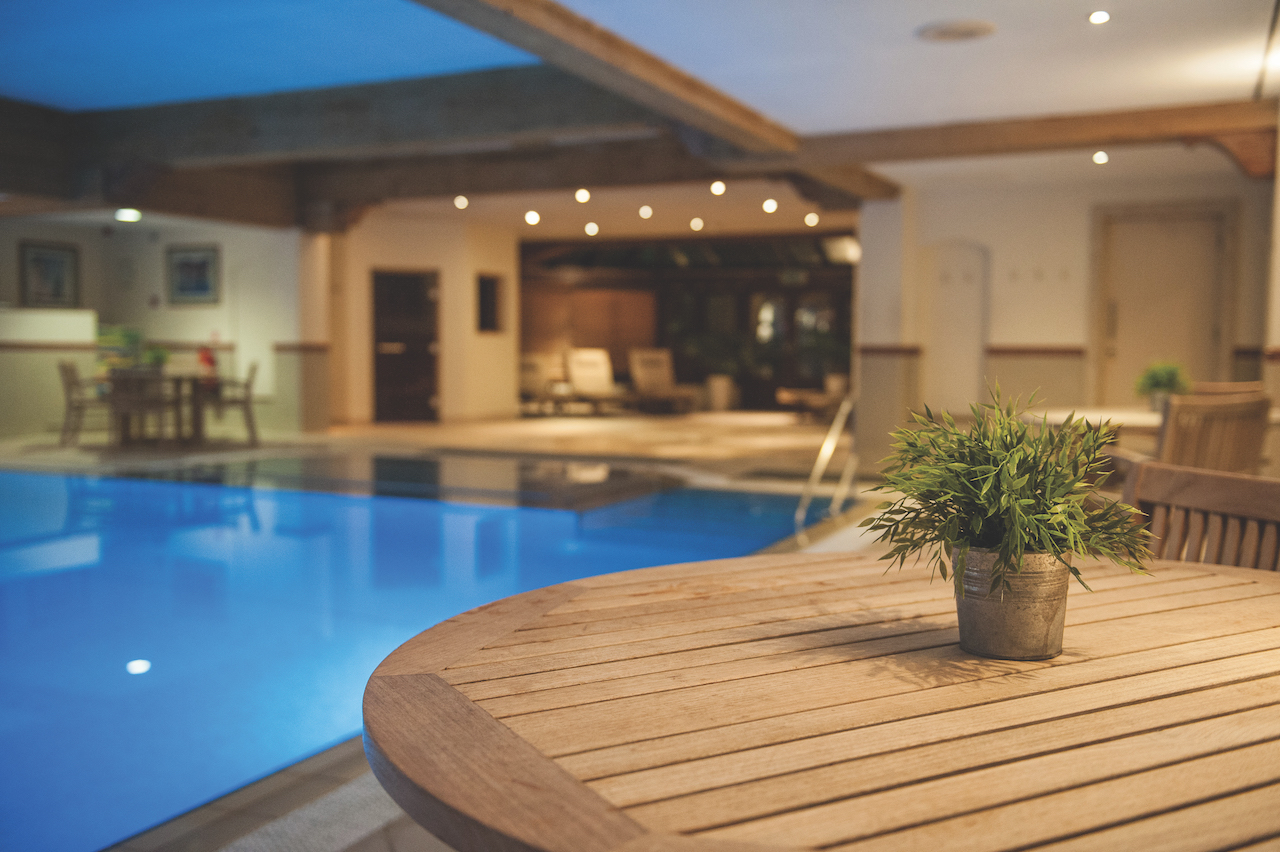