In association with Attraction Tickets Direct

Last month Belle and I went to Orlando. It was Belle’s first time in the States and my first time taking Belle on a flight longer than four hours. She was very well-behaved and didn’t cry or ask to go to the toilet all the time, which is what I was worried about, what with all the ‘travelling with kids’ posts I read beforehand. I actually didn’t have to get out a single colouring sheet.

We’d been sent there by Attraction Tickets Direct, which makes it sound like a punishment, which it really wasn’t as it turns out there are quite a lot of things to do in Orlando.

The first thing to spring to mind when you think of Orlando is ROLLER COASTERS, and justifiably so. I’ve been on a lot of roller coasters in the UK and every single one I went on in Orlando was WAY better. In the UK I normally just spend the time trying not to get my head bashed about, but in Florida the roller coasters just seemed so much more comfortable, so much smoother. Probably a weird thing to say about a roller coaster, but it means you can enjoy the ride rather than just concentrating on keeping your head still. They are much longer too, so you can really get into the twists and turns.

It isn’t all about roller coasters in Orlando though.

Here are some of the other things WE did, in case you want to copy us, because we are very cool. Regular readers will know this already – visitors who just happened to have Googled ‘things to do in Orlando’ will have to take my word for it.

Ride the rapids at Aquatica

The river rapids were one of our absolute favourite things. If ever Belle seemed to be getting a bit hot and tired I just dunked her back in and she was back on track.

Aquatica has two rivers – Loggerhead Lane, the lazy river, and Roa’s Rapids, which are a little more adventurous. Roa’s Rapids were out favourites. Belle’s top thing to do in Roa’s Rapids was to try to shove me against the jets in the walls so I’d get my thighs pummelled, or to ride on my back while I tried to throw her off, rodeo style. (You may notice that her best bits tend to be at my expense.) 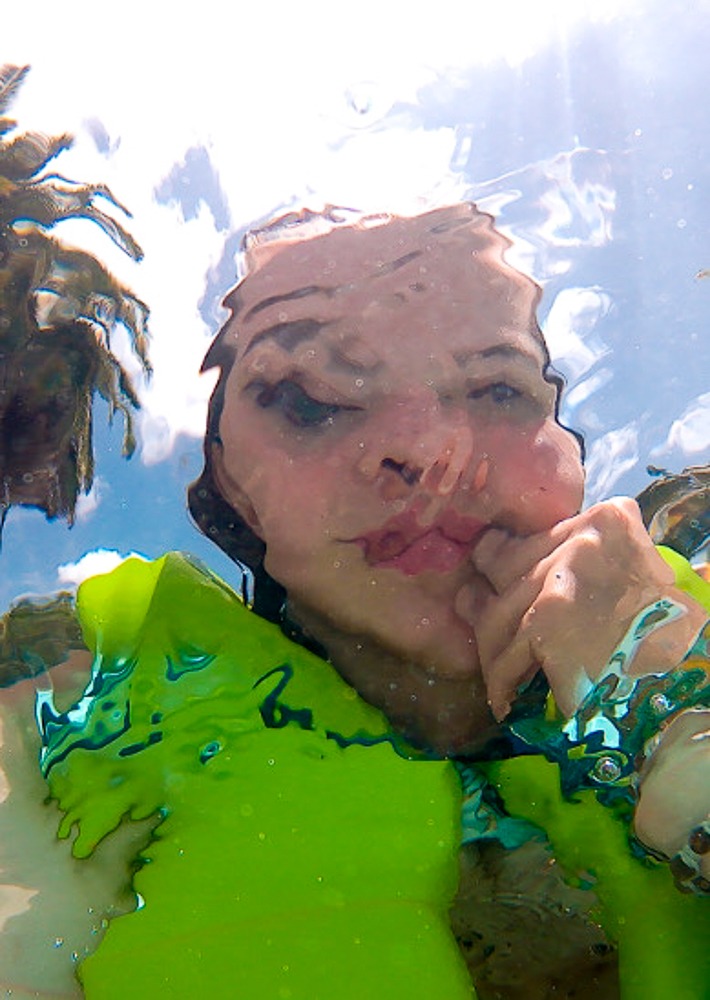 If you’re a fan of watery thrills, (ooer), do NOT leave Aquatica without a go on their brand new family raft ride, Ray Rush, which involves you swooping up and down a giant manta ray half-pipe. Worth noting here that Attraction Tickets Direct do a 3 for 2 SeaWorld, Aquatica and Busch Gardens ticket, including free parking.

(Also I seem to have developed a new hobby – watching rollercoaster and water slide videos on YouTube. I really need a boyfriend.)

Generally I would say I’m pretty brave when it comes to doing STUFF. There wasn’t a single rollercoaster at any of the parks we visited that I wouldn’t go on and I even went on Ihu’s Breakaway Falls at Aquatica when Belle was too scared to. (You stand in a sort of pod and the floor disappears, dropping you vertically into a water slide that’s REALLY far off the ground.)

SeaVenture at Discovery Cove was probably the one thing on the whole trip that I was genuinely nervous about. Partly I think because I can’t really swim (fun fact) and so anything underwater feels very much out of my comfort zone. Although you don’t feel the whole weight underwater, the diving helmets weigh over 70 pounds, and you know that if you want to get out it’s not a question of just lifting it off and bobbing to the surface.

That sense of trepidation though can often make an experience even more exciting, and the SeaVenture at Discovery Cove is definitely not something I’m going to forget in a hurry. I’m also really glad I took loads of videos, as the view from the camera is very different to the view through the helmet.

If you’ve got the 3 for 2 park tickets package already then you can upgrade to include an all-inclusive day at Discovery Cove with the Discovery Cove Ultimate Package.

Visit the coolest place in Florida

Antartica: Empire of the Penguin, is below zero degrees in places, which is going to be absolutely what you want if you’re visiting SeaWorld in August. This day was the hottest of our whole trip and we went to visit the penguins twice.

It’s not just any old ‘walk in, look at some penguins, walk out’ experience mind – there’s a penguin themed ride where you sweep gracefully through sparkling underground caverns and follow the life of a penguin. It’s pretty cute. 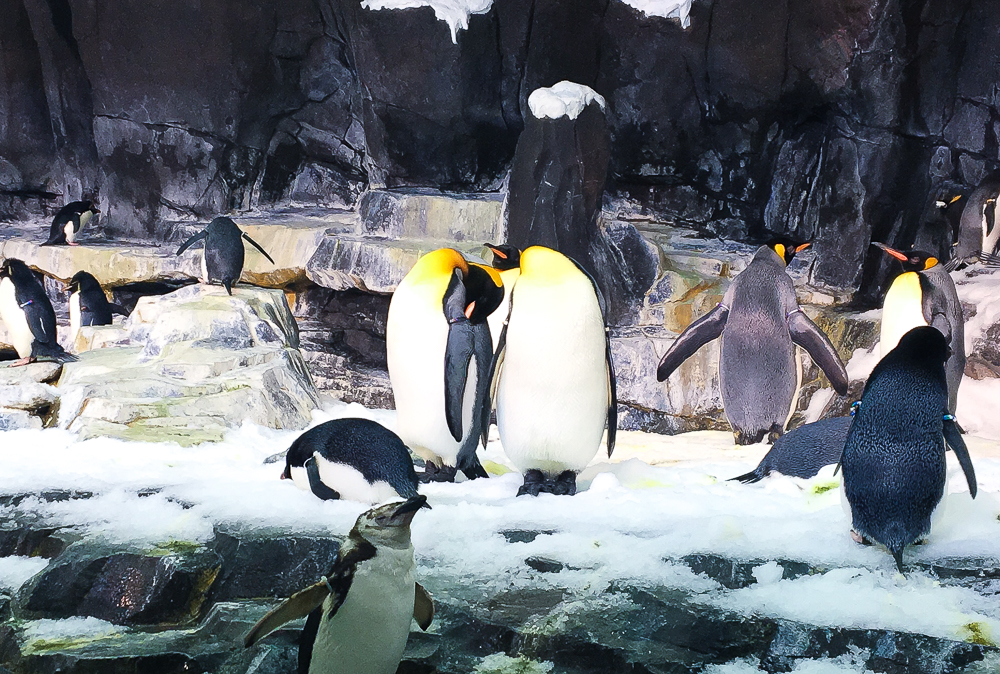 When we visited SeaWorld the new Infinity Falls ride wasn’t quite open, but it’s coming very soon, so do keep an eye out for that one as it’s going to be the world’s tallest river rapid drop. (I absolutely love river rapid rides – one of my favourites from the whole trip was the Congo River Rapids at Busch Gardens.)

Get a Pink Drink at Starbucks

Apparently there’s this thing called a ‘pink drink’, which some YouTubers are always getting, and you have to ask for it and generally look a bit silly – there I am, a 40-year-old English woman saying ‘oh excuse you please can I get a Pink Drink?’ as though I’m asking for a lap dance or something.

Okay okay, I’m sneaking in a rollercoaster, but that’s because this one is amazing and was Belle’s favourite – it’s Mako at SeaWorld. It has some amazing twists and turns, but it doesn’t have any kind of shoulder straps, so although you’re going at incredible speeds you feel this amazing sense of being free to move around. It makes it very exciting.

You can get a taster here:

Eat a slice of pie at The Village Inn

This was a pretty ordinary looking family restaurant right opposite our hotel, (The DoubleTree Hilton at SeaWorld, Orlando), but I’d definitely recommend it if you want to experience a breakfast that combines bacon, sweet pancakes, strawberries and whipped cream all on one plate. There are TV screens in each corner of the restaurant, (small ones, nothing intrusive), and one day they were showing baseball, American football AND rodeo.

They have a big sign on the wall saying they do the best pie in America and I have to say they did all look amazing. We had a slice of key lime, but I was VERY tempted by the peanut butter chocolate one. They were less than $12 for an entire pie, so a good option for taking back to your hotel room with a couple of spoons after a long day at the parks.

Hand feed a giraffe (or two)

We really enjoyed the Busch Gardens Serengeti Safari – a proper ‘back of an open truck’ experience that lets you get really close to all kinds of animals including giraffes, zebras and rhinos. It’s a half hour trip and you’ll get to stop and feed the giraffes with your OWN HANDS. Giraffes are just amazing – if I had a neck that long I’d be banging it into stuff all the time, making a fool of myself, but they are so graceful and elegant. 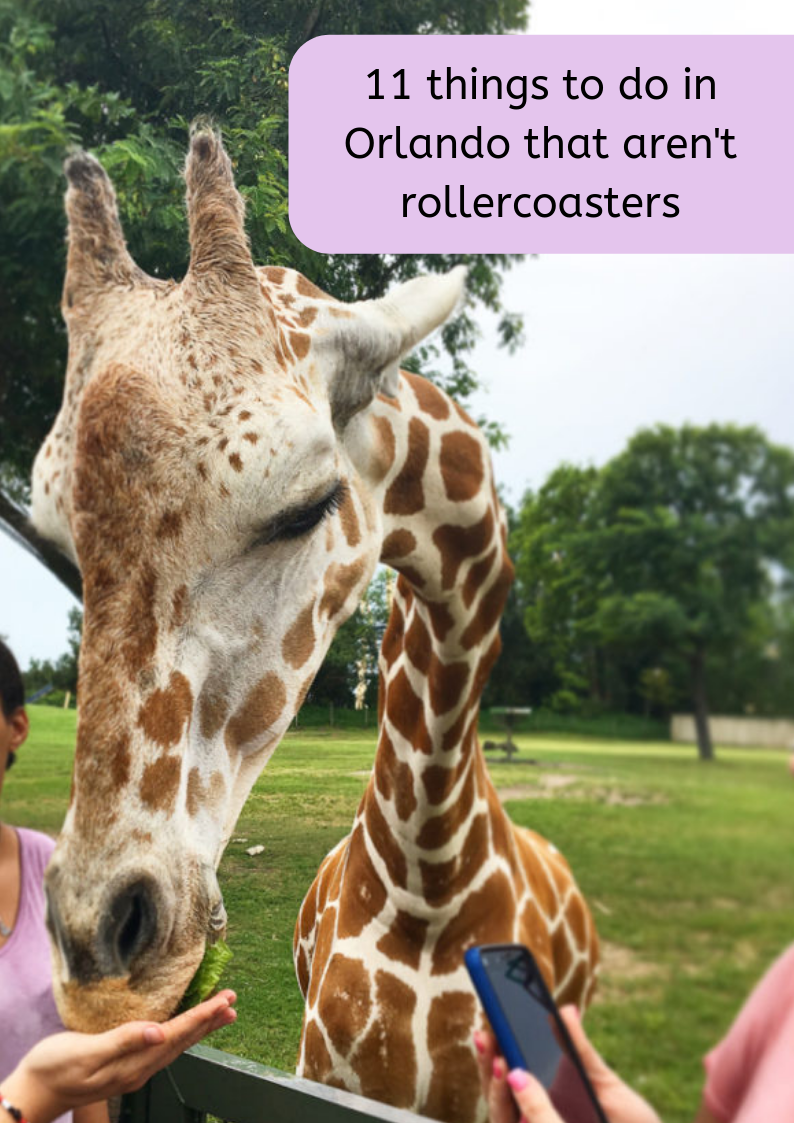 Get a bird’s-eye view of Busch Gardens

If you don’t do the Serengeti Safari you can still see the animals, either by taking the miniature train – the Serengeti Express – or by taking a trip on Skyride – a cable car ride that goes over the park and gives you a bird’s eye view of all the animals. You also get a whole new perspective on the rollercoasters…

My recommendation would be to take the Skyride from Stanleyville into the Edge of Africa and then to go on Cheetah Hunt, which is just next door. Cheetah Hunt was my favourite rollercoaster at Busch Gardens – it’s the longest coaster in Tampa Bay and as you can probably guess from the name, it’s FAST. 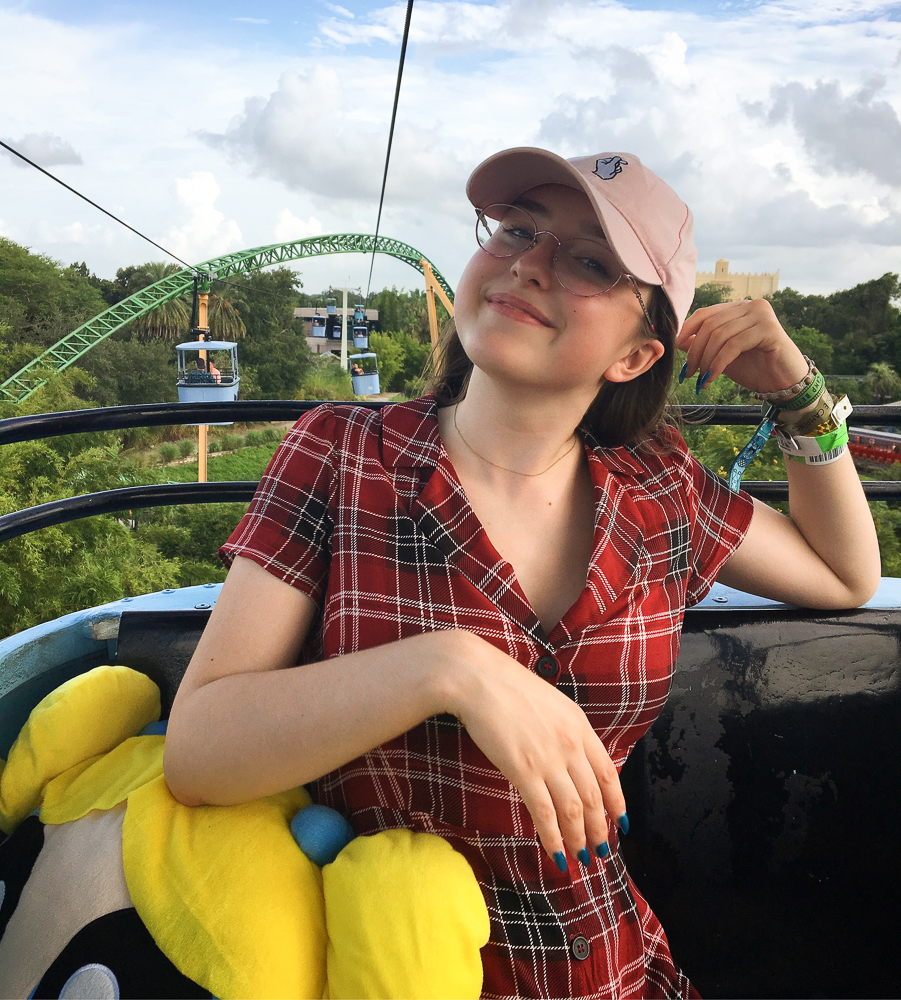 We did this at Discovery Cove and it was a pretty amazing experience. Kind of scary too, because you are very aware of their strength and their size and that you are getting to do something very special.

That face though! I don’t think I’ve seen Belle look that genuinely happy in a long time. 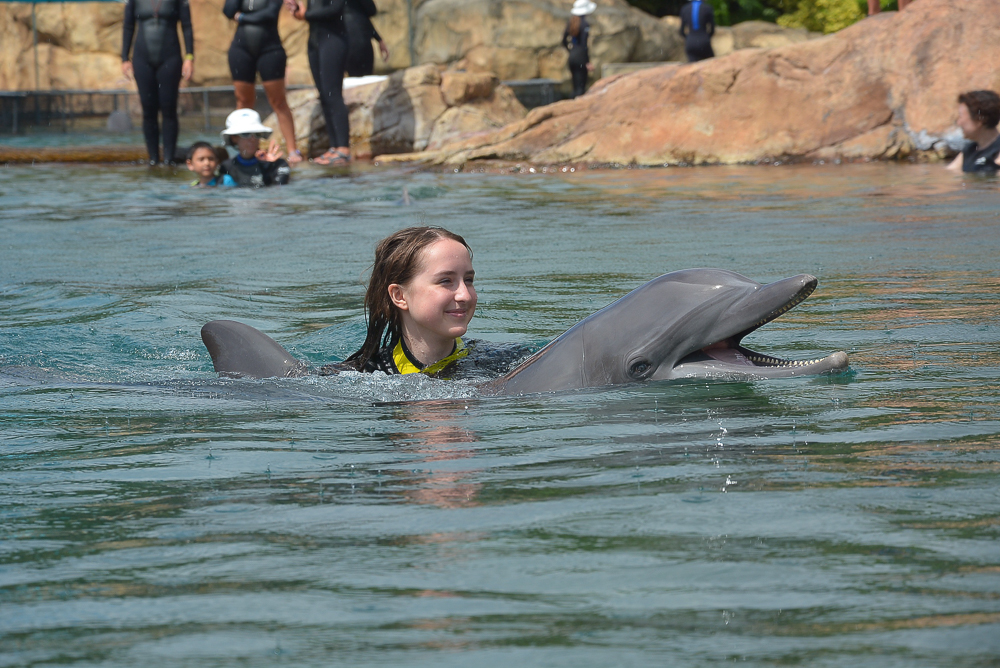 Or should it be ‘drink a sno cone’? I guess it depends on what stage you’re at in the sno cone proceedings.

It was actually only when buying our sno cones at Busch Gardens that we realised that the all day dining deals also give you ‘buy one get one free’ on things that aren’t included for free in the deal, like the snack concessions, beer, wine, and, of course, sno cones. 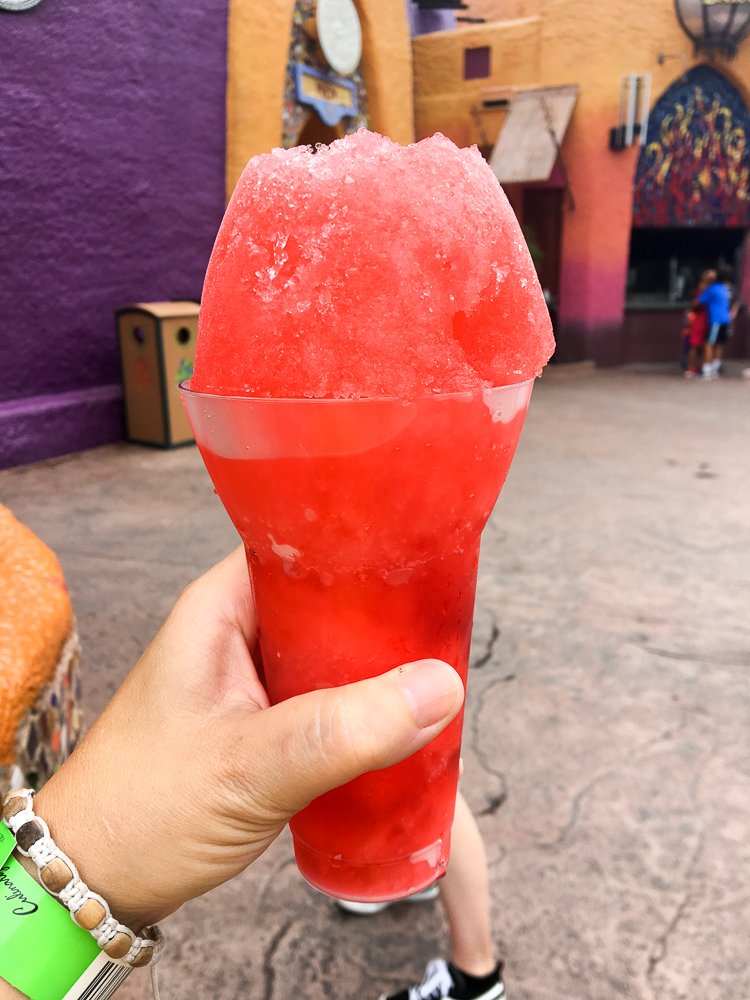 I am not exaggerating when I say that Belle took an entire extra suitcase just to bring home snacks from Walmart. In the UK, going to a supermarket would not be high on her list of ‘things I hope Mum asks me to do today’ but for some reason going to Walmart in the US is SUPER FUN. (I am going to go out on a limb and say it came second to the dolphins, but probably touch and go.)

I say ‘for some reason’, like I don’t know what the reason is. The reason is THINGS MADE OF SUGAR. Oreos, Pop Tarts, Jolly Ranchers – all of the treats that she sees her American friends eating and that she wants a shelf of in her bedroom. Bringing back a suitcase full of vanilla cupcake flavour goldfish crackers also seems like a good way to make UK-based friends.

Which just goes to show really that it’s possible to find pleasure in the simplest of things.

If you like the sound of my suggestions then don’t forget that Attraction Tickets Direct offer a great value 3 for 2 SeaWorld, Aquatica and Busch Gardens ticket, including free parking. You can also upgrade to include an all-inclusive day at Discovery Cove with the Discovery Cove Ultimate Package.

Have you visited Orlando? What are your favourite things to do there?

Buy tickets for all the Orlando theme parks and get exclusive discounts and offers at Attraction Tickets Direct.