Advertisement feature in association with Bosch

It’s no secret that I once cut my front lawn with a pair of scissors.

I was maybe 20 years old and living for the first time alone with Bee, who must have been about three. It was around the same time that I had a couple of candles to light the kitchen because I couldn’t afford to replace the strip light when it blew, so a lawnmower wasn’t exactly top of my list of priorities. When I say it like that it sounds rather Dickensian, but honestly I don’t think I minded the lighting. Who doesn’t love a candle for a bit of atmosphere?

The lawn wasn’t massive either – it was just the little patch outside the front of our tiny house – but it had grown to embarrassing lengths, the kind of length that makes you feel bad about yourself every time you come home and have to look at it while you open the front door and run inside as quickly as possible.

As I’ve got older I’ve got much better at doing sensible grown up things like mowing the lawn, but it’s still not one of my most favourite jobs, and if I don’t keep on top of it it can quickly slip back to those ‘get in the front door quick and avoid eye contact with the neighbours’ days.

The last month or so has been like that. 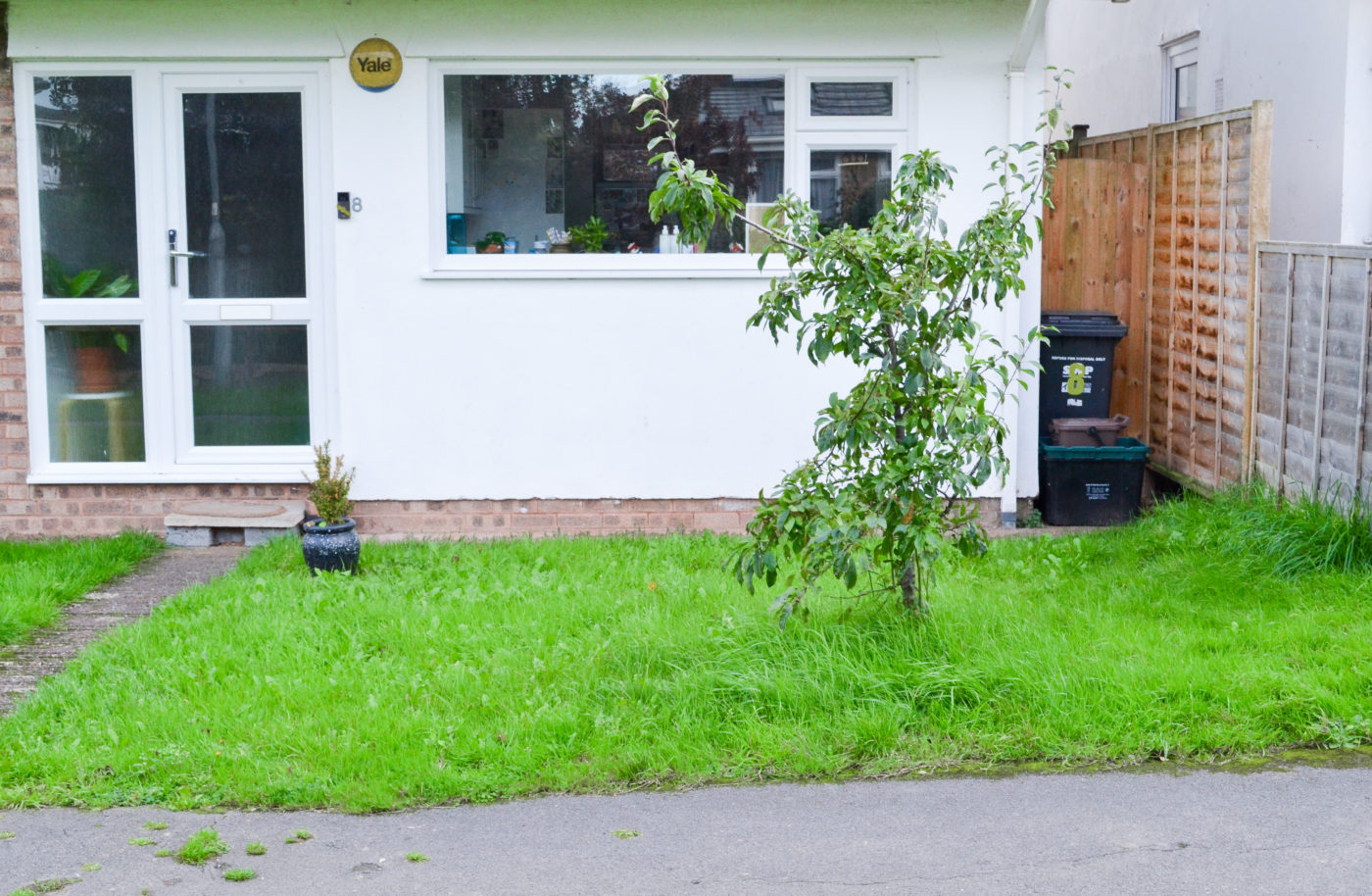 We’ve had all of this random rain, which is always tricky for lawns, and the house is north facing so it’s hard for the grass to dry out properly between showers unless the weather is really warm. Then I had that broken leg to contend with… not really on the leg thing, I’m just making excuses.

It wasn’t horrendous, but it wasn’t not GOOD exactly, especially around the edges, which were distinctly bushy. 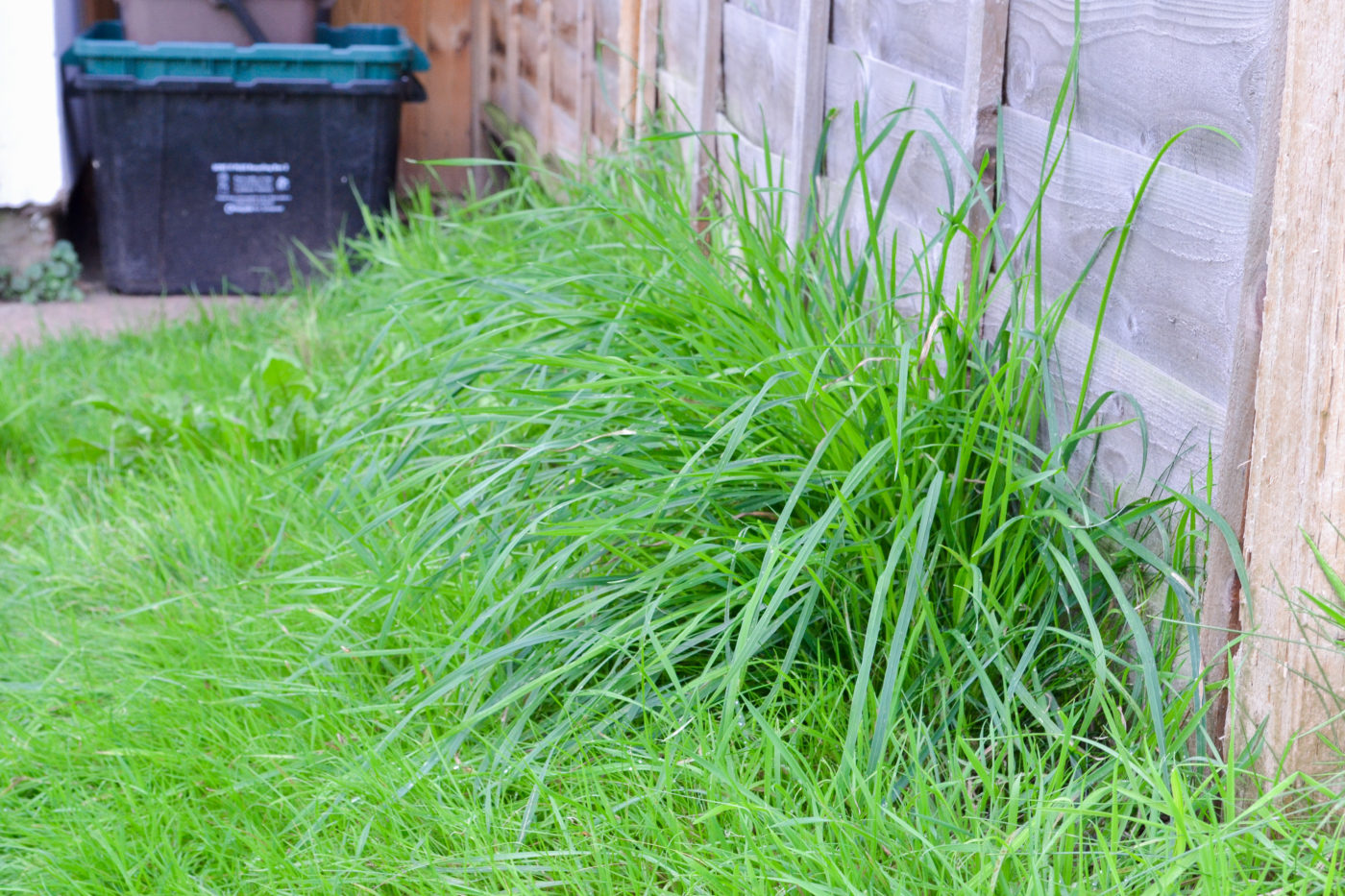 Quick, get the scissors.

The lawns have yet to look amazing at this house, partly due to me previously having a very basic lawnmower, which is rubbish with edges and isn’t height adjustable. Okay, so perhaps it was ONCE, but only if you did something complicated with the blades and an actual tool, which I immediately lost. It’s stuck therefore on a sort of medium setting, meaning that even when you have cut the lawn, it never looks crisp and you can’t get the stripes. The stripes are also difficult because I cut the grass like I use a hoover, pushing it in random patterns, backwards and forwards.

The back garden wasn’t much better, although it’s generally not as good a lawn so it doesn’t grow as fast or as luscious as the front. It was newly laid a couple of years ago on heavy clay soil and I don’t think it likes it. 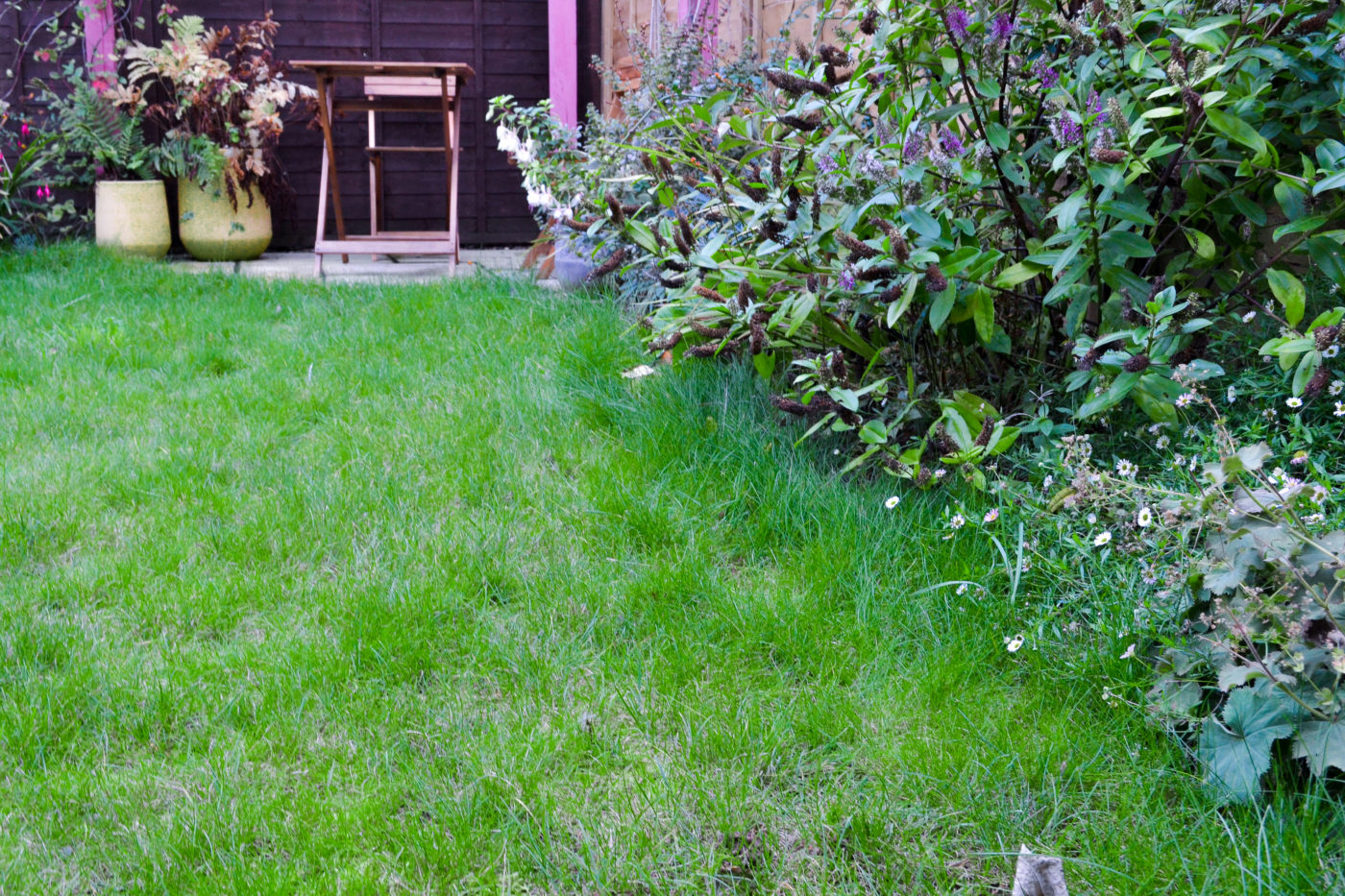 Let’s just say that both of my lawns were in need of a tidy.

Time to introduce the garden to a couple of appliances from the Bosch Home & Garden range – the Rotak 34 R lawnmower and the universal garden tidy.

Let’s start with the lawnmower.

First up you have to put it together, which is very straightforward. The 40 litre grass collection box contains the back wheels, which click into place easily, and then it’s just a question of screwing on the handle. The handle has some flexibility in terms of height, so before you secure it take a minute to make sure the height is comfortable for you. This is a nice little feature as it means you can customise the lawnmower to suit you and won’t break your back over cutting the grass.

Then you choose your height setting. Unlike my old lawnmower this is incredibly simple and just means positioning a lever on the side of the mower to raise or lower the blades. The Rotak 34 R has a range of 20mm to 70mm. 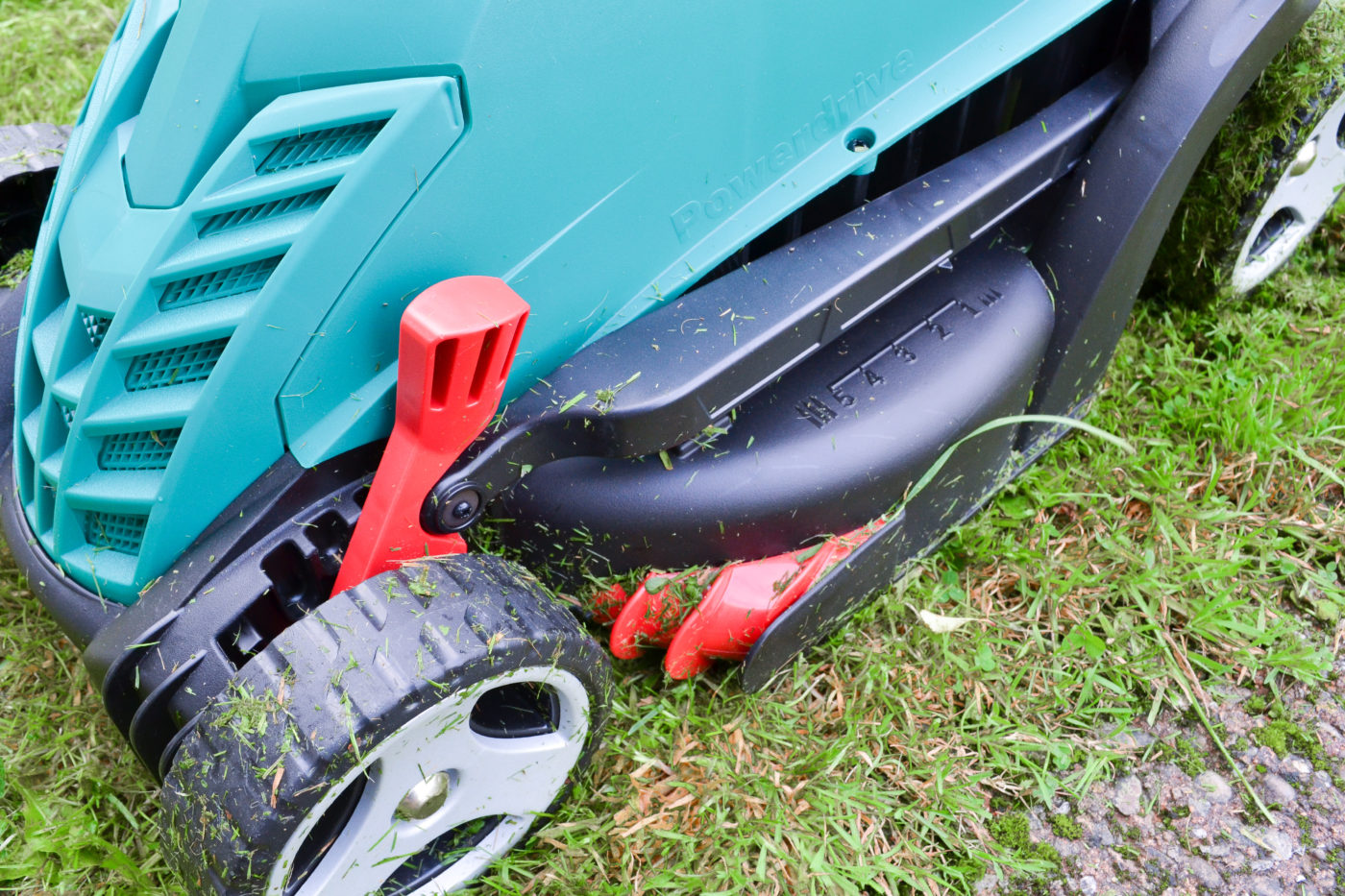 Because my grass was long I started on the highest setting for my first cut, and then switched down to a lower setting for a second cut. The lower setting was definitely lower than my old lawnmower managed, and meant I got a really nice looking, close finish. The Rotak 34 R also has grass combs at the sides to give a neat finish to edges, even up against fences, and I definitely felt that it delivered on this. I’d normally have to get the strimmer out to go up to the fence, but I didn’t feel the need with the Bosch lawnmower.

I also made an effort to remember I was cutting the lawn and not hoovering the living room, and I followed the instructions as to how best to achieve a stripey pattern, going up and down in straight lines. This was a bit hard in places, as there isn’t a lot of space on the edge up against the house, but I did my very best. 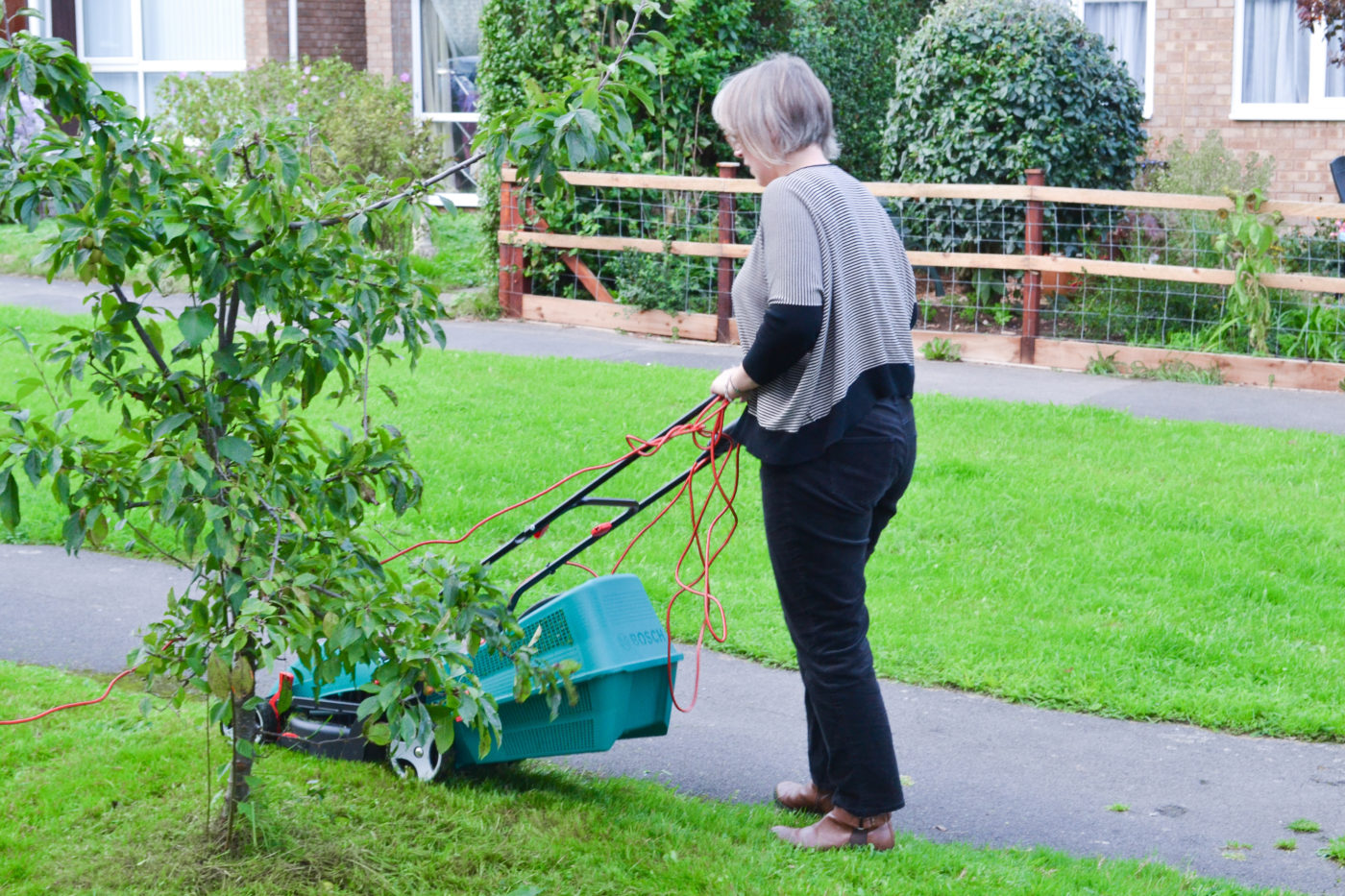 The Rotak 34 R is ideal for small to medium lawns like mine – it’s only 11kg but has a 1300W Powerdrive motor system, perfect for anyone who wants a really decent, affordable lawnmower.

The length of the lawn meant that the grass at the base isn’t currently in the best condition, but hopefully you can see that I had a go at least. Next year I promise to make an effort to cut it regularly and keep the grass in the best possible condition. You even get a hint of stripes! 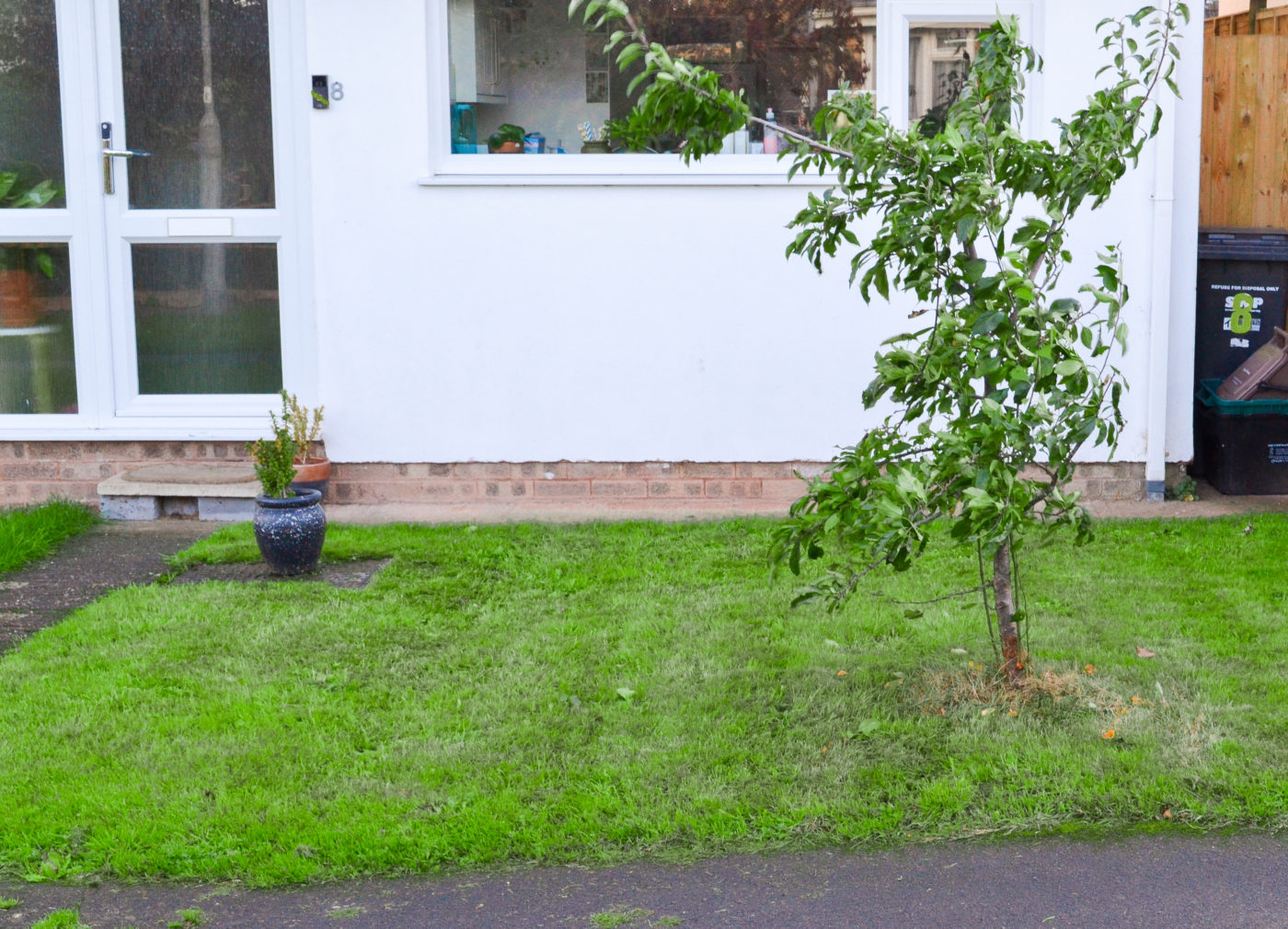 You might also be able to spot the cat path as a slightly darker shade of green. For some reason the cats have a preferred route across the lawn, coming in from the right, running parallel to the fence and then meeting the path that runs along under the kitchen window. They’ve trodden it so many times that even when I cut the grass you can still see it. 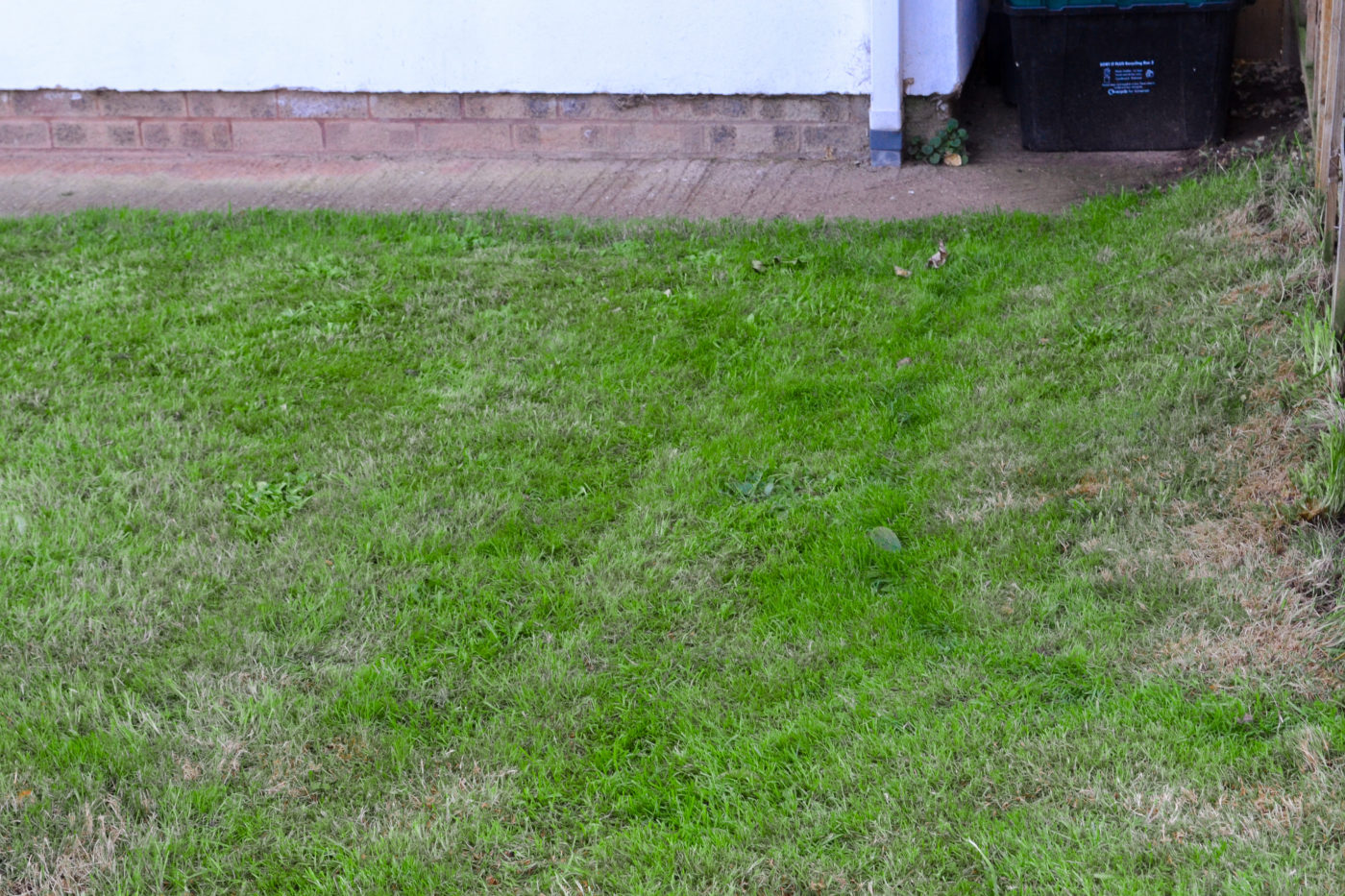 When you’re finished simply empty all the cuttings and stack the grass box for easy storage.

Now for the tidying up.

I was a bit disappointed at this point to be honest that the Bosch lawnmower was so tidy. Normally when I finish cutting the lawn grass has blown about everywhere, and I have to try to sweep it up with my old broom, which has a head that falls off at least three times every use. (I’ve been known to take the cordless Henry into the garden to hoover the patios.) This lawnmower is clearly better at collecting the grass though, as there was hardly anything left to clean up.

Fortunately we do get quite a lot of leaves collecting in the front garden, and plenty of garden debris in the back garden too, especially around the flowerbeds at this time of year. I say fortunately, because who doesn’t want an excuse to use the Bosch universal garden tidy? 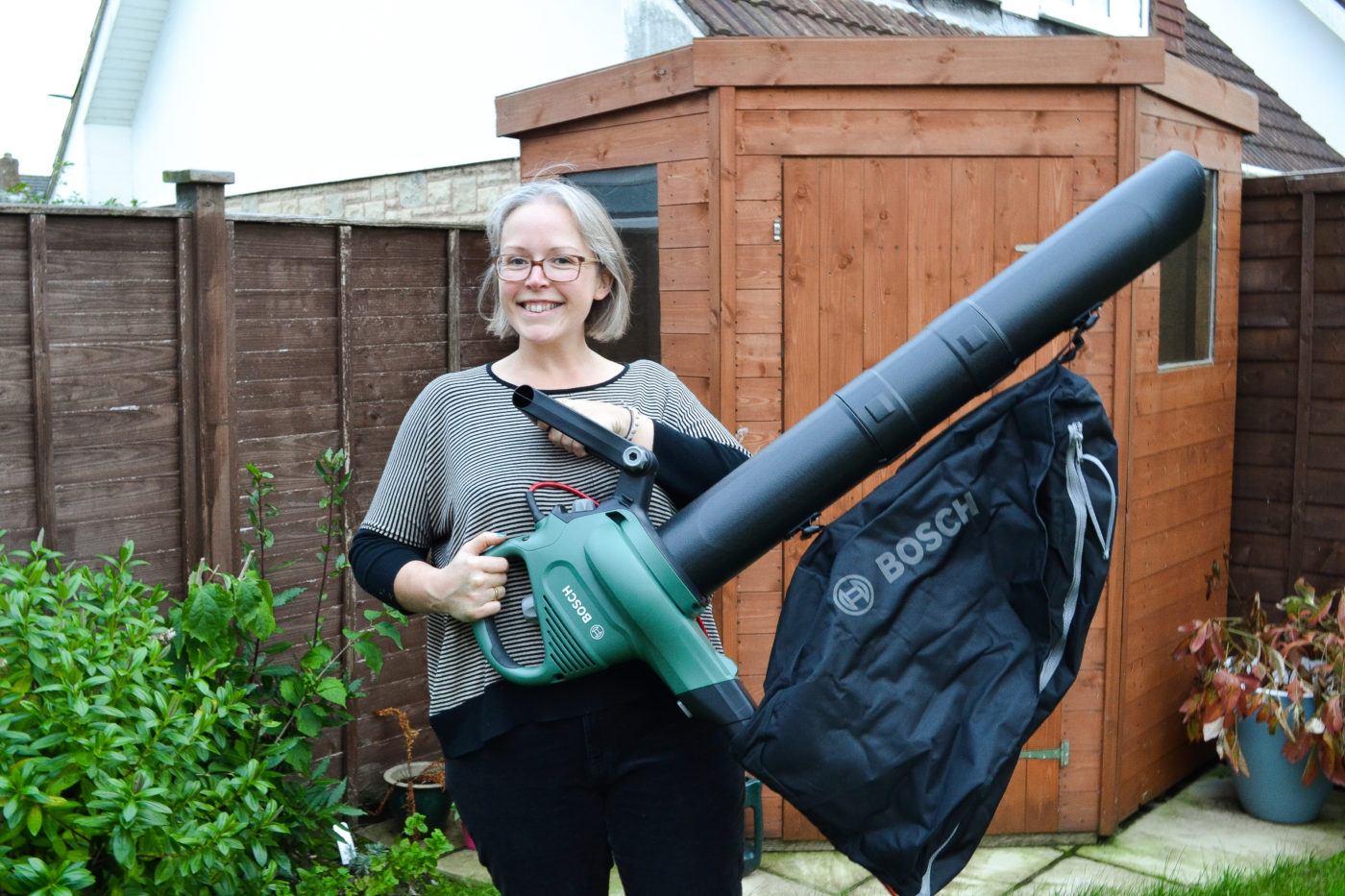 Honestly, I felt like James Bond or something with this in my hands, like I might be about to take out an enemy from a long distance. (Obviously the garden tidy is not a toy and you must always use it safely and what not.)

But still, you feel powerful. 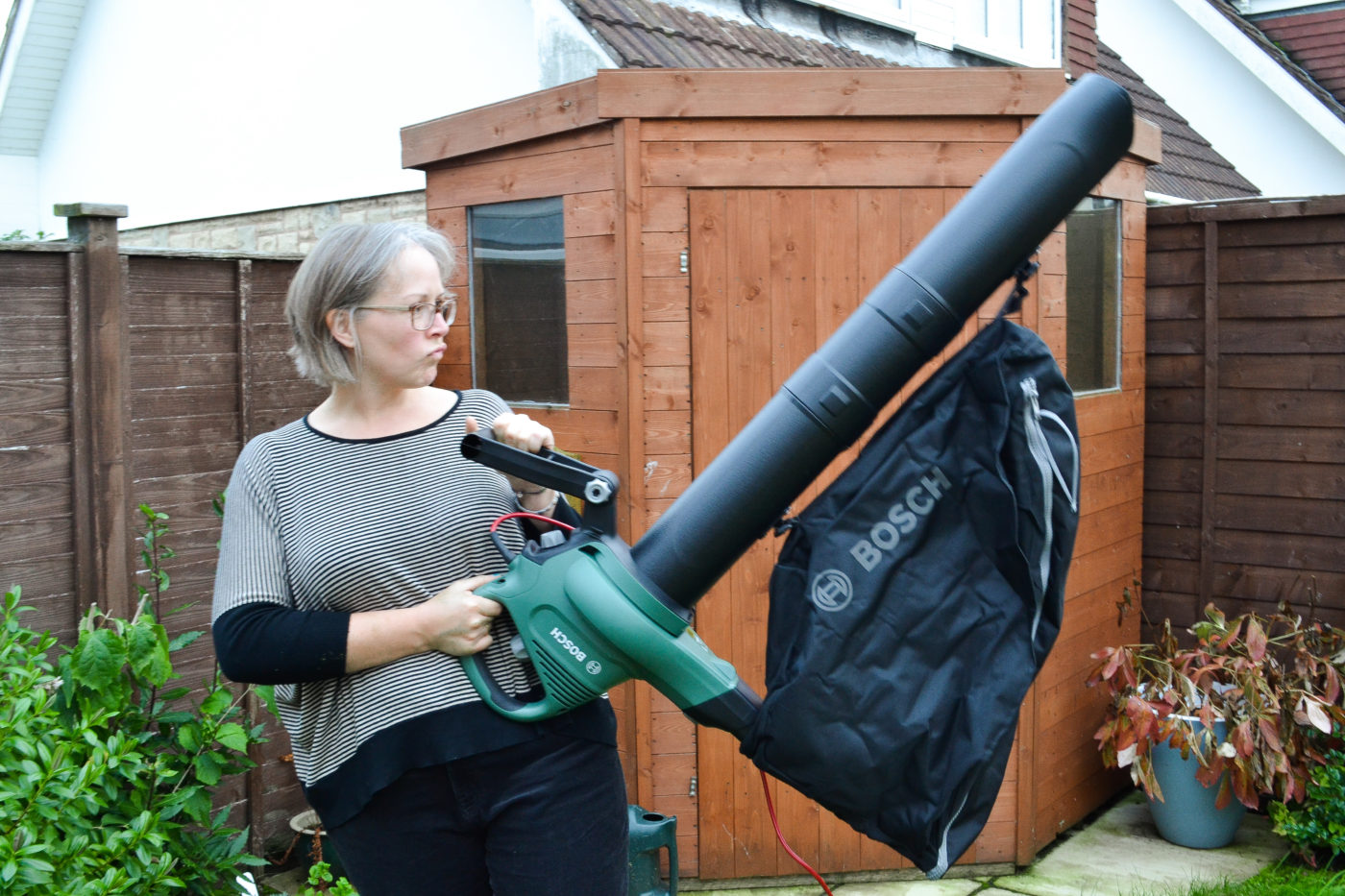 That’s my powerful face, in case you were wondering, as opposed to the picture above which is my ‘my mummy has just picked me up from nursery and I have a painting to show her’ face.

Like the lawnmower, the universal garden tidy needs some assembly before use, but the instructions are easy to follow. This is it in the vacuum mode, but you can also use it as a blower if you have masses of leaves or an atmospheric YouTube video to make. It also does shredding, which is very exciting. It has 1800w of power and a 45 litre collection bag. The bag also has specially designed moisture repellent ‘dirt deflectors’, making the garden tidy a much better option than getting the actual vacuum cleaner out. (Who would do that?)

The universal garden tidy is very simple to use and can make a big difference to your garden, helping you avoid horrible piles of soggy leaves making a mess over the winter. 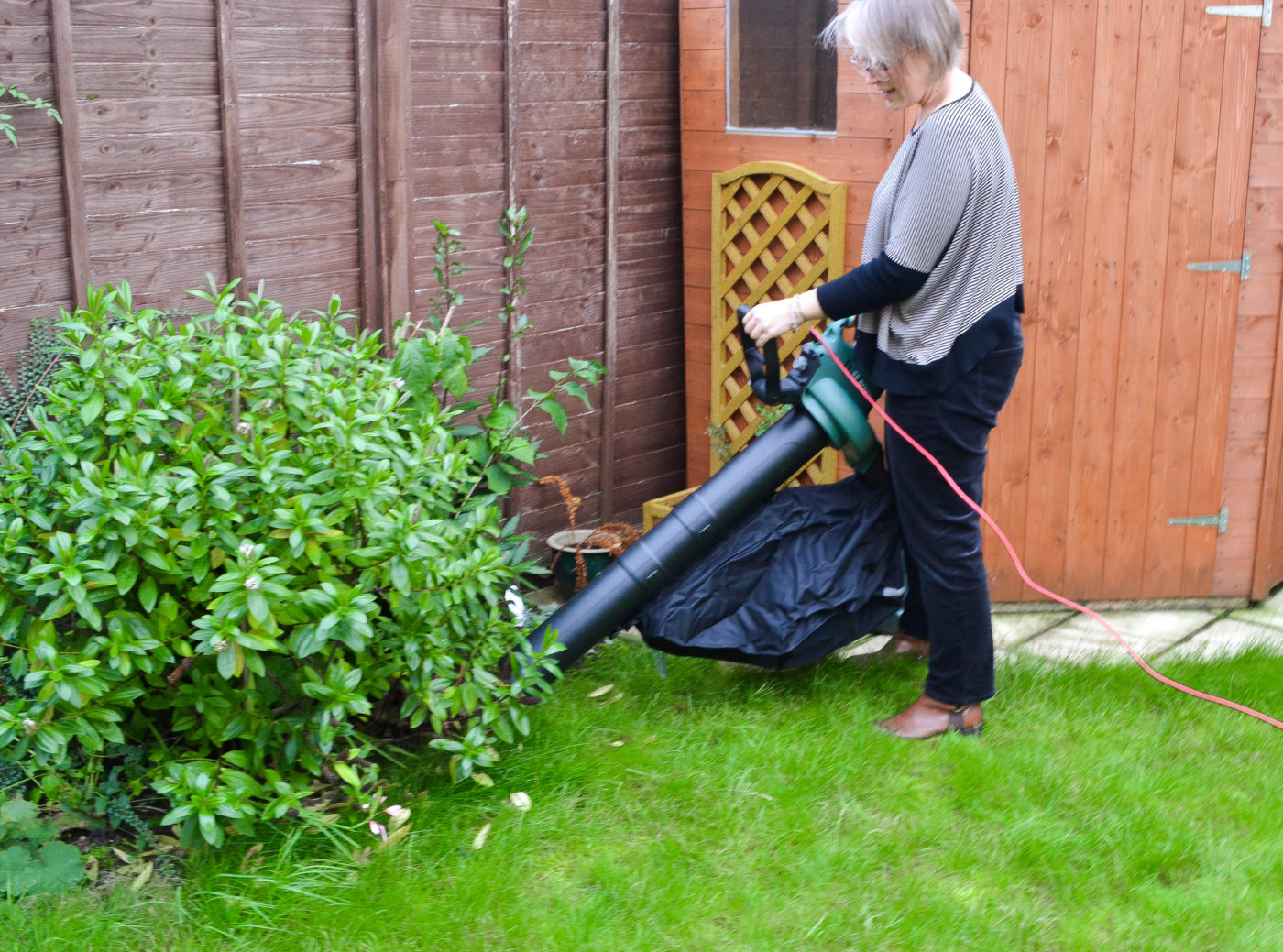 Overall then I’m pretty pleased with myself for making the effort to get the lawns in shape for winter. I now have the tidiest front lawn of all my neighbours and can look them in the eye once again, and not a pair of scissors in sight!

Get your garden in shape with the Bosch range of garden tools. 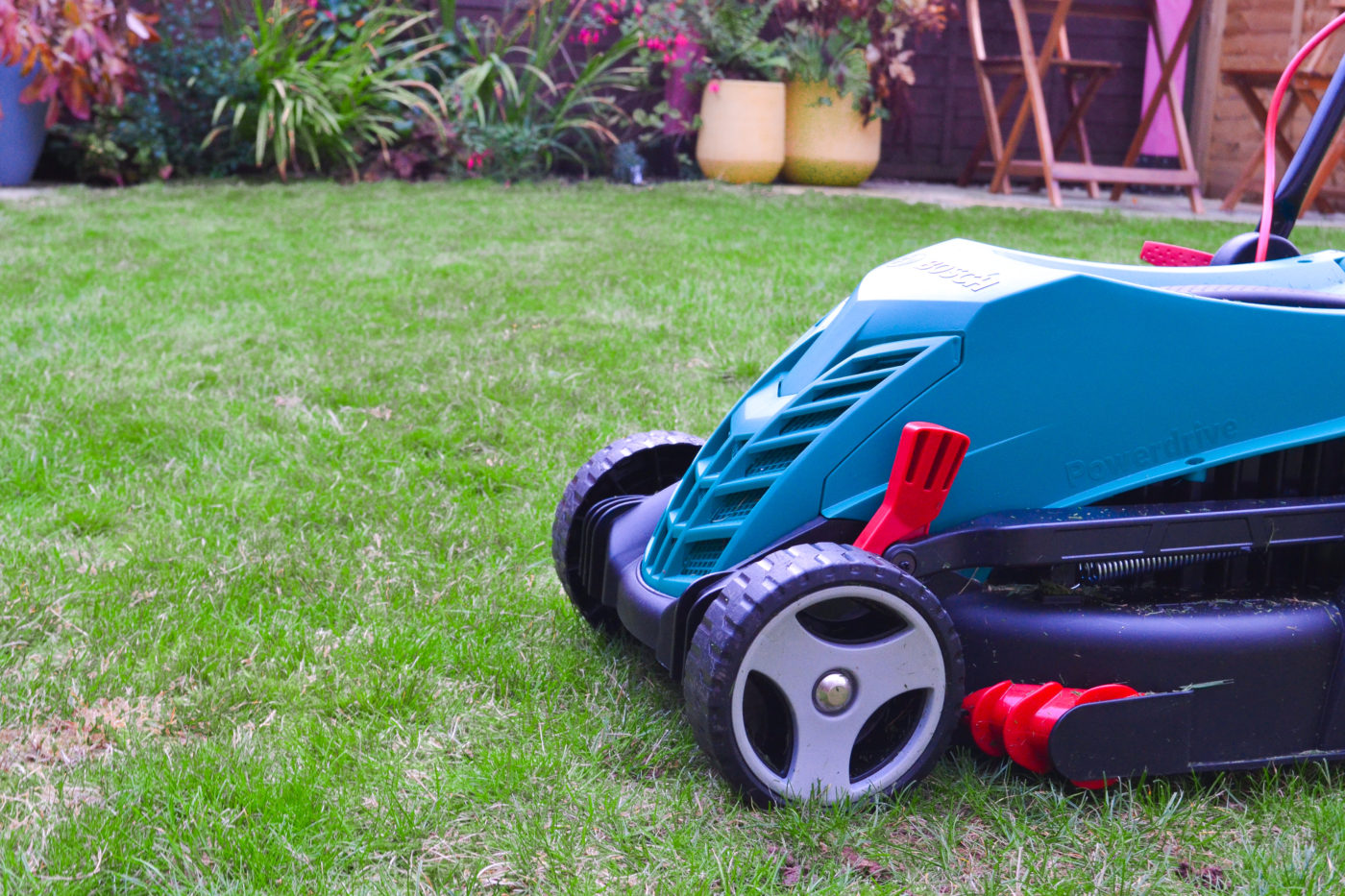