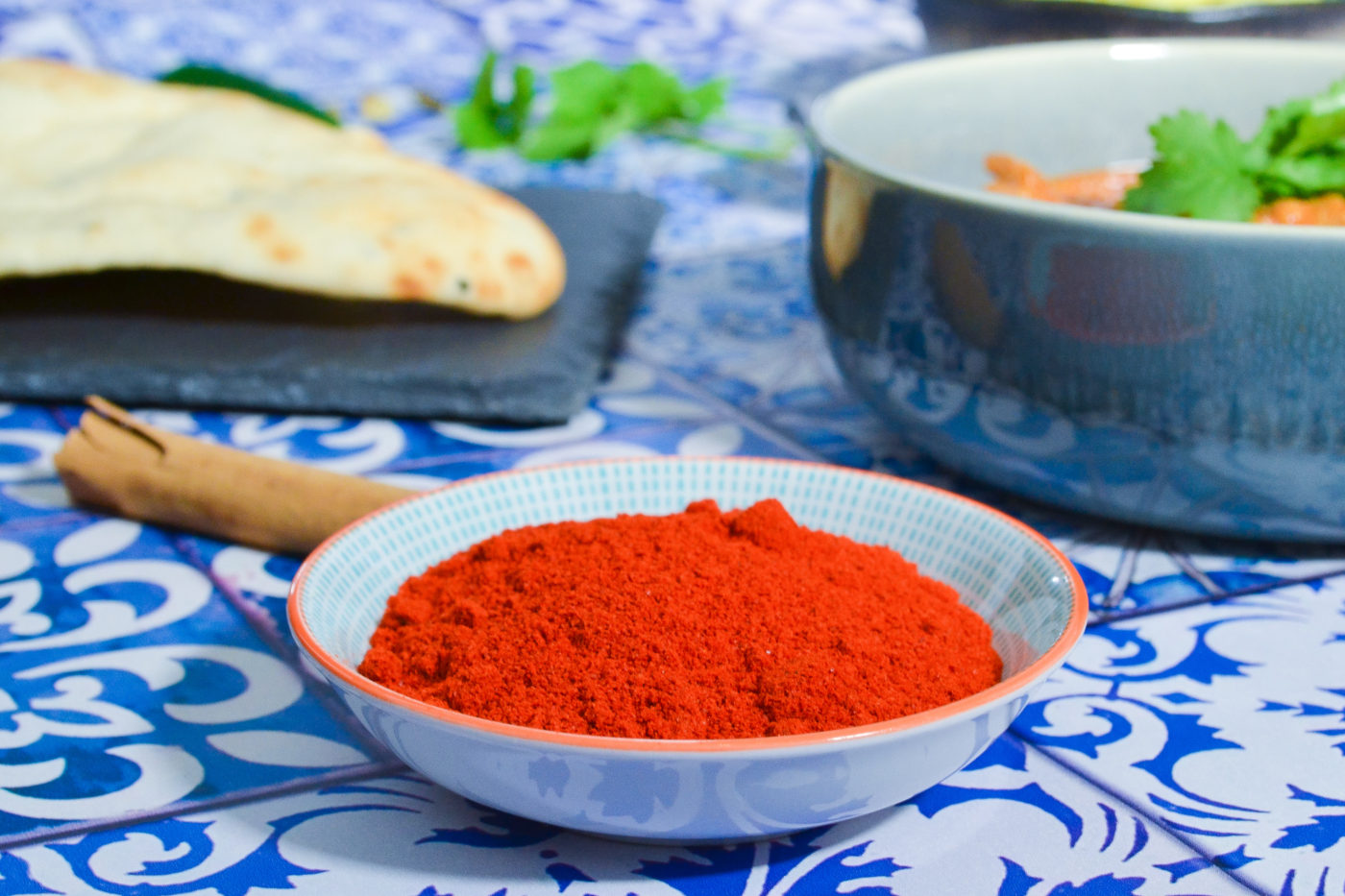 Welcome to National Curry week! That’s right, this week – October 7th – 13th – is National Curry Week and great timing too given the turn in the weather. This week is the week to get comfy on the sofa with a big bowl of homemade lamb rogan josh and some good autumn TV. (Personal current favourites being the new series of The Apprentice and the first ever series of Ru Paul’s Drag Race UK.)

What’s sad though is that despite it feeling sometimes like the UK is becoming one big cafe/restaurant, British curry houses and Indian dining is in decline in the UK. A third of the UK’s estimated 17,000 curry houses could face closure over the next decade, which would be a huge shame. Partly it’s due to changing tastes and demographics, but also the misconception that Indian restaurant food is ‘unhealthy’ or that the foods associated with Indian cuisine, such as lamb curry, are eaten more by older generations.

As you know I’ve been working on a campaign this year called ‘Lamb. Try it, love it‘, encouraging people to eat more lamb, and so I wanted to use National Curry Week as an opportunity to champion the use of lamb in curries. Lamb is brilliant for curries as it carries the spicy flavours really well, but without getting lost. (If you want proof of this then try out my Thai massaman lamb curry – now one of my favourite ever curries.) I also wanted to challenge the stereotype of curry houses being a bit old-fashioned and so I went to Birmingham, possibly the most well-known destination for curry in the UK, for a meal at the multi-award winning Asha’s.

Asha’s is where the cool kids go for curry. They serve amazing food but they also appreciate that nowadays people expect more from a restaurant. (I’m looking at you Millennials.) Asha’s has created a dining experience to reflect that, blending authentic Indian cooking with more contemporary flavours and a sophisticated ambience. Asha’s even has its own cocktail menu, inspired by Indian cuisine, featuring treats such as the Maharaja’s Mistress, made with rose jam, curry leaves infused arrack, spiced rum and champagne, garnished with Turkish delight.

The staff at Asha’s were incredibly generous with their time and let me arrive before the restaurant opened for a tour of the kitchen and to find out more about the food they create. Head Chef, Sunil Kumar, who was instrumental in setting up the first ever Asha’s in Dubai before moving to Birmingham, gave me the tour, showing me first the three large tandoori ovens. Even though service hadn’t started the kitchen was already warm with the smell of spices and slowly cooking meats. I imagined the kitchens in full flow, the sounds and smells of food cooking and pans clattering and it felt exciting.

Sunil chatted to me about his love of food and his career with Asha’s and I asked him what his favourite dish is to cook. Lo and behold, he whisked me over to a hob, where he had prepared everything to make me a lamb rogan josh. Dishes of colourful spices lined the worktop, some of which I recognised, others I didn’t. Asha’s blend their own spices, including a garam masala that has 13 individual ingredients, and they source other ingredients locally wherever possible. The red spice is Kashmiri chilli powder, which is one of the key ingredients in a lamb rogan josh. 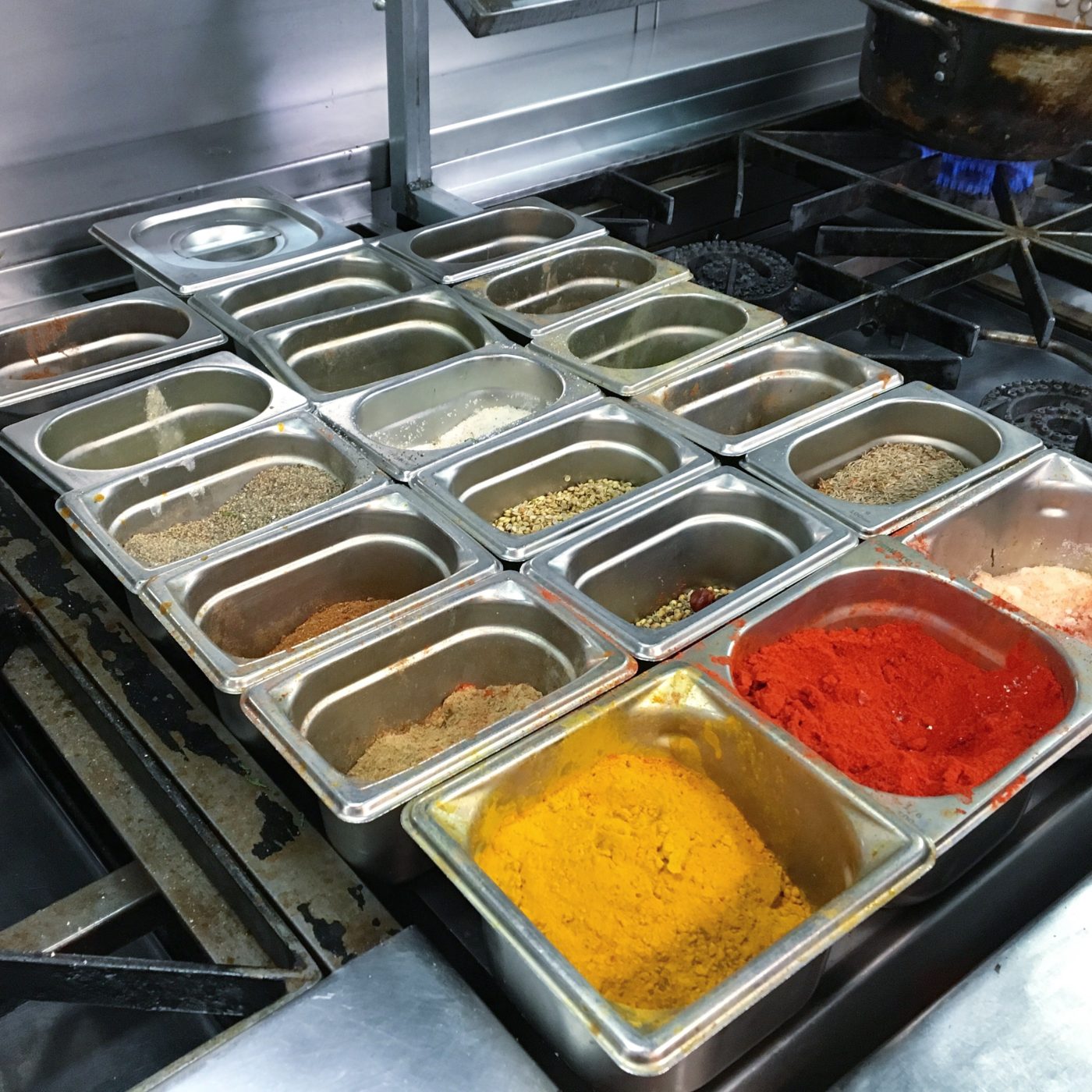 I’ve never been in the kitchens of an Indian restaurant before and I’ve certainly never had the chance to watch a top chef cook my dinner for me, so I was thrilled. I took out my phone, ready to take notes of all the secrets I was about to learn so that I could recreate my own lamb rogan josh at home.

Sunil started by heating some pure ghee in a large heavy based pan. With a flick of his wrist he briefly turned the innocent looking pan into a towering inferno. ‘I could definitely do that I home,’ I said. Sunil looked sceptical. Next in goes fresh ginger, chopped green chillies and some of the Kashmiri chilli powder. So far so good. 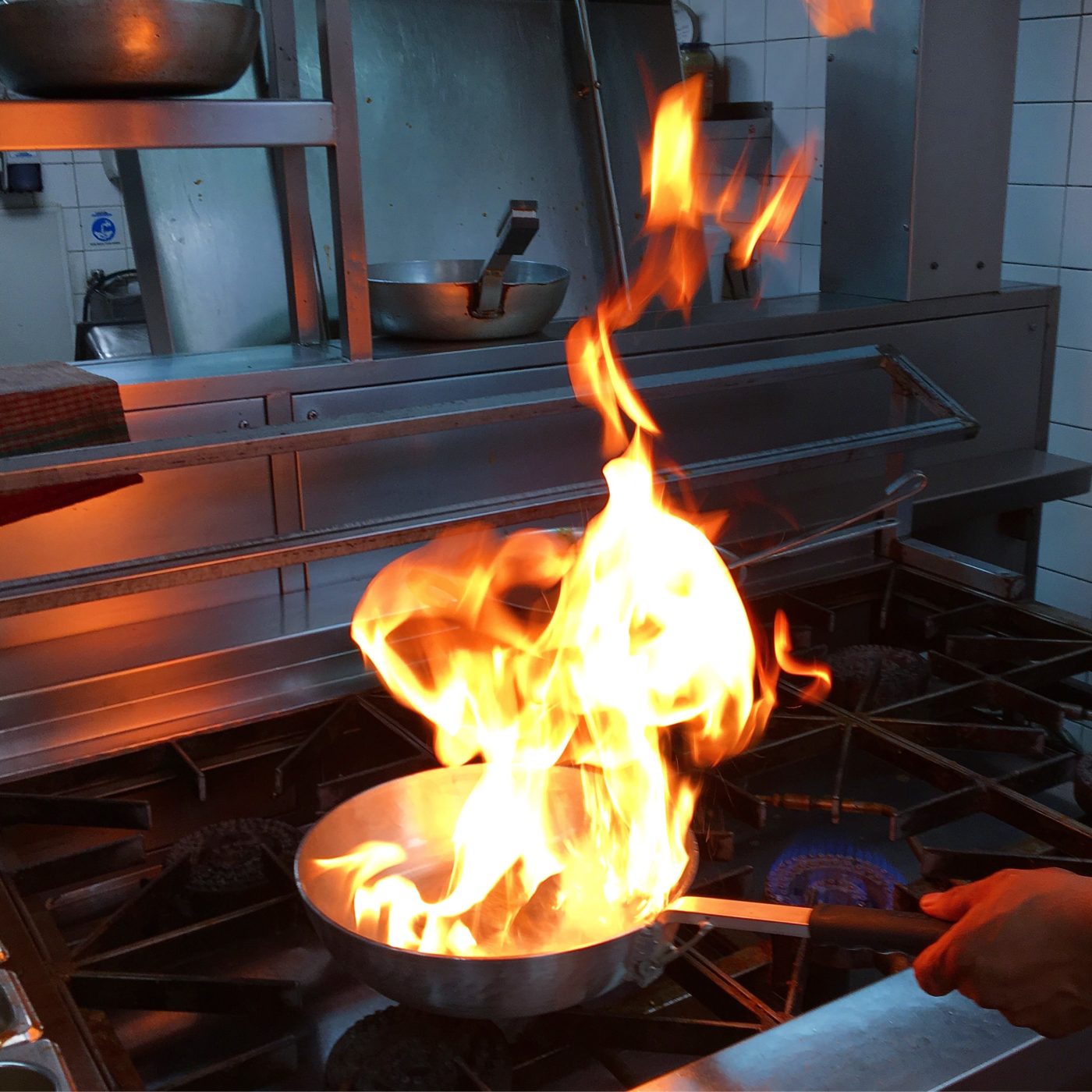 ‘Next we add the lamb rogan josh,’ said Sunil casually, ladelling the lamb and sauce from a huge pot at the back of the stove.

Right. Okay. Well I’ll just do that at home then shall I? I started to feel less confident about my ability to recreate Sunil’s recipe as the sauce sizzled in the pan with the ginger, chillies and spice. I asked about how the sauce is made and was given a long but complicated sounding explanation that involved bone marrow and a lot of cooking time. My vision of myself opening a pop-up curry shack in Taunton High Street faded further.

Once the lamb rogan josh had sizzled for a few minutes, Sunil added a spoonful each of ‘brown gravy’ and ‘tomato gravy’, salt, garam masala and fenugreek leaf before decanting into a bowl and garnishing with coriander. It’s over almost before it’s begun but at the same time I know that the cooking process that has gone on behind the scenes, in terms of preparing each of the individual elements, has been a long and thoughtful one. 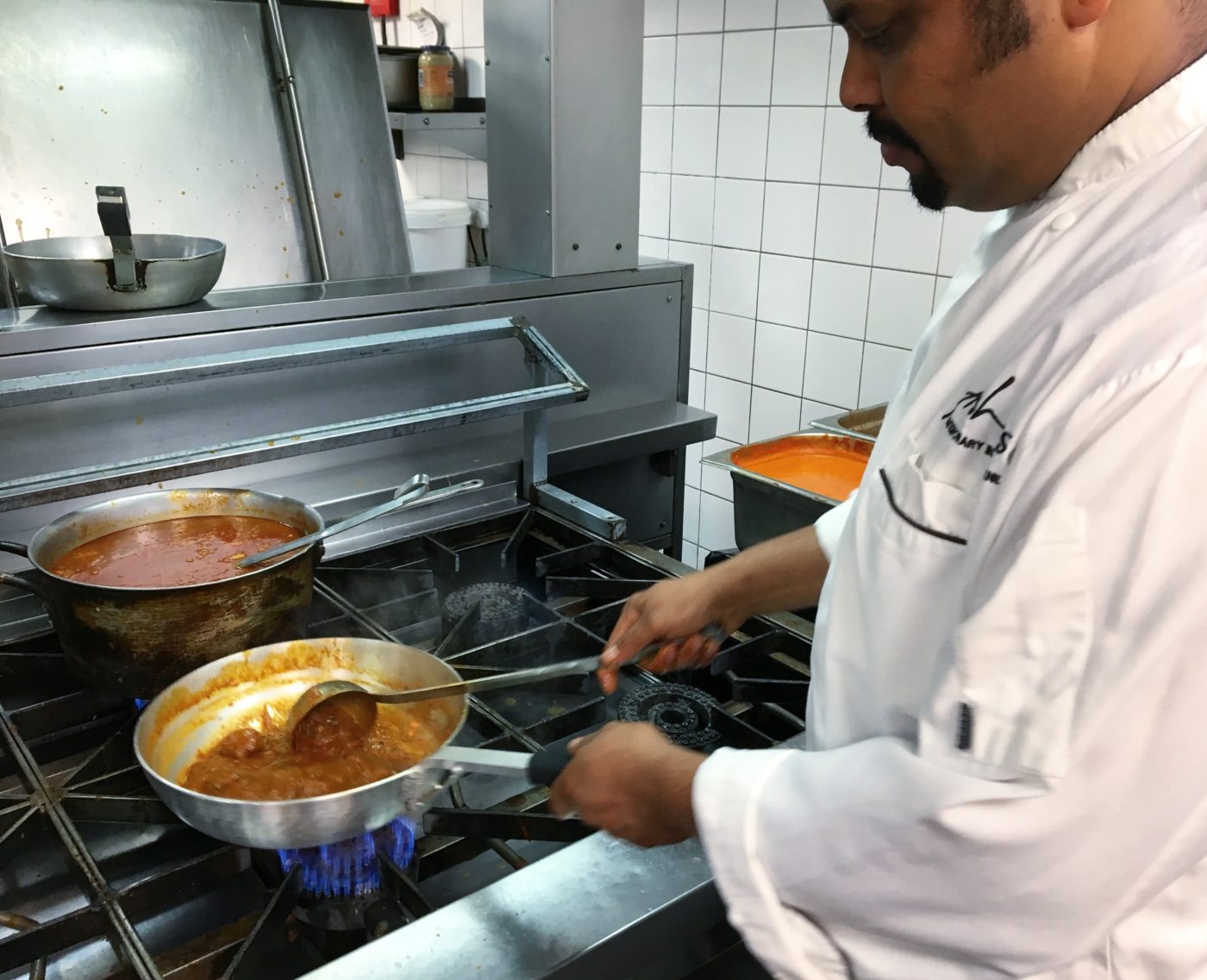 Back in the restaurant and after a delicious starter platter including a tandoori lamb kebab that has been marinated for 24 hours, I was presented with my lamb rogan josh. It’s delicious, of course it is – the lamb sort of crumbles on my fork it’s so tender. I honestly don’t think I’ve ever eaten a lamb rogan josh before, because I’ve been worried that it would be too hot for me, but the Kashmiri chilli powder is much more about an aromatic flavour and warmth than blowing your head off. It did make my cheeks rosy, and I was glad of my Maharaja’s Mistress, but it’s a pleasant heat that left me feeling happy and warm.

‘Any top tips for me when I try to recreate this at home?’ I asked Sunil hopefully.

He laughed. Then looked serious. ‘You can’t make this at home,’ he said, and he’s right of course. He shook his head and smiled, amused. 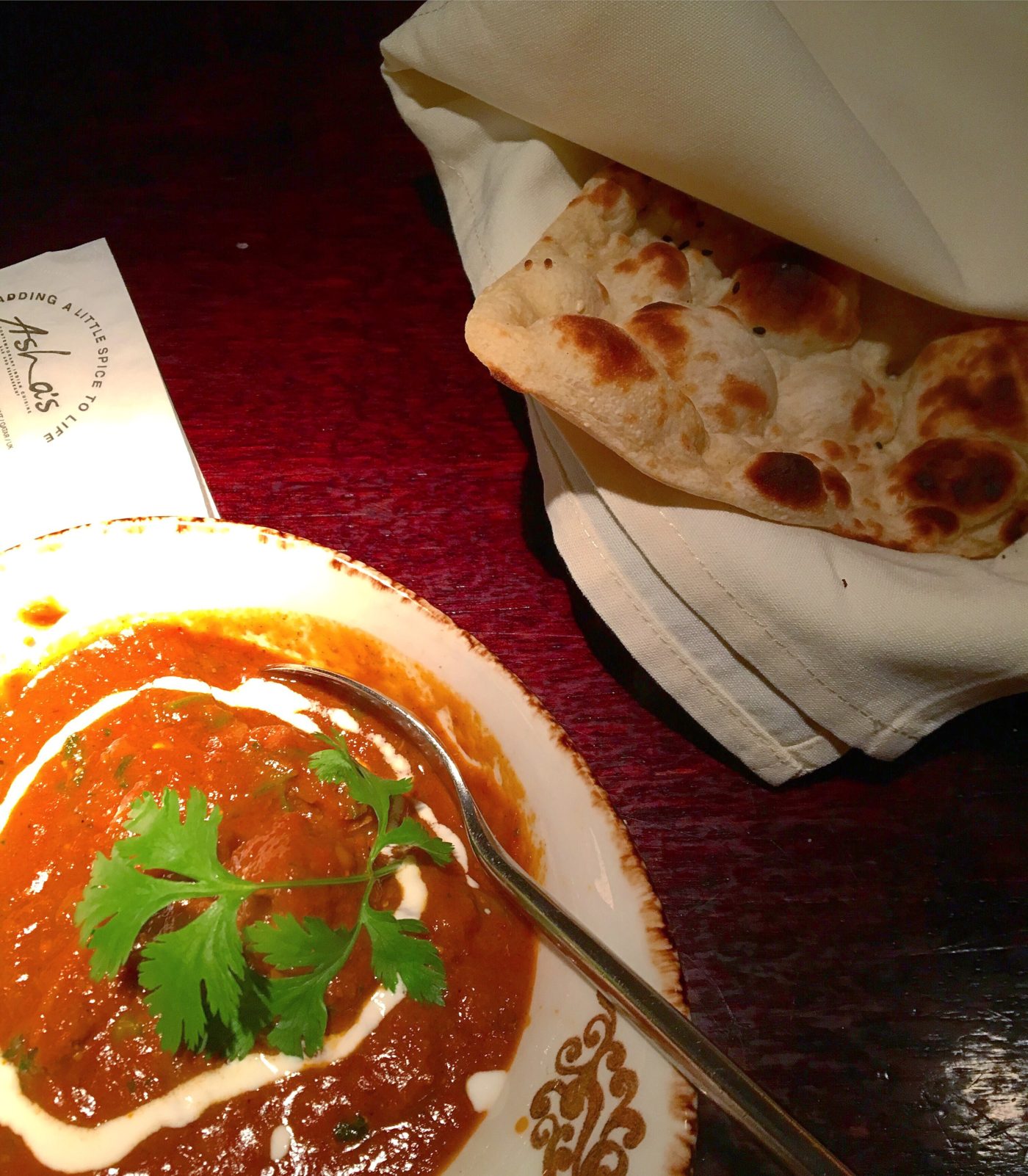 Still, my challenge is to try at least, and at the risk, inevitably, of insulting Sunil with my cack-handed approach to Indian cooking, I’ve had a go at making my own lamb rogan josh. I’d like to say I toiled over a hot pan for days, adding and taking away ingredients in tiny quantities, but I’d be lying. My thing is creating simple, non-scary recipes that normal people can make at home, and so what actually happened was that I looked through a lot of different lamb rogan josh recipes, picked bits from each according to what spices I had in the cupboard already, and then bought some ghee and Kashmiri chilli powder for authenticity.

While my lamb rogan josh might not be up to Asha’s standards, it is tasty at least, and simple. If you can’t make it to Birmingham for National Curry Week then it’s an easy and affordable stand in. 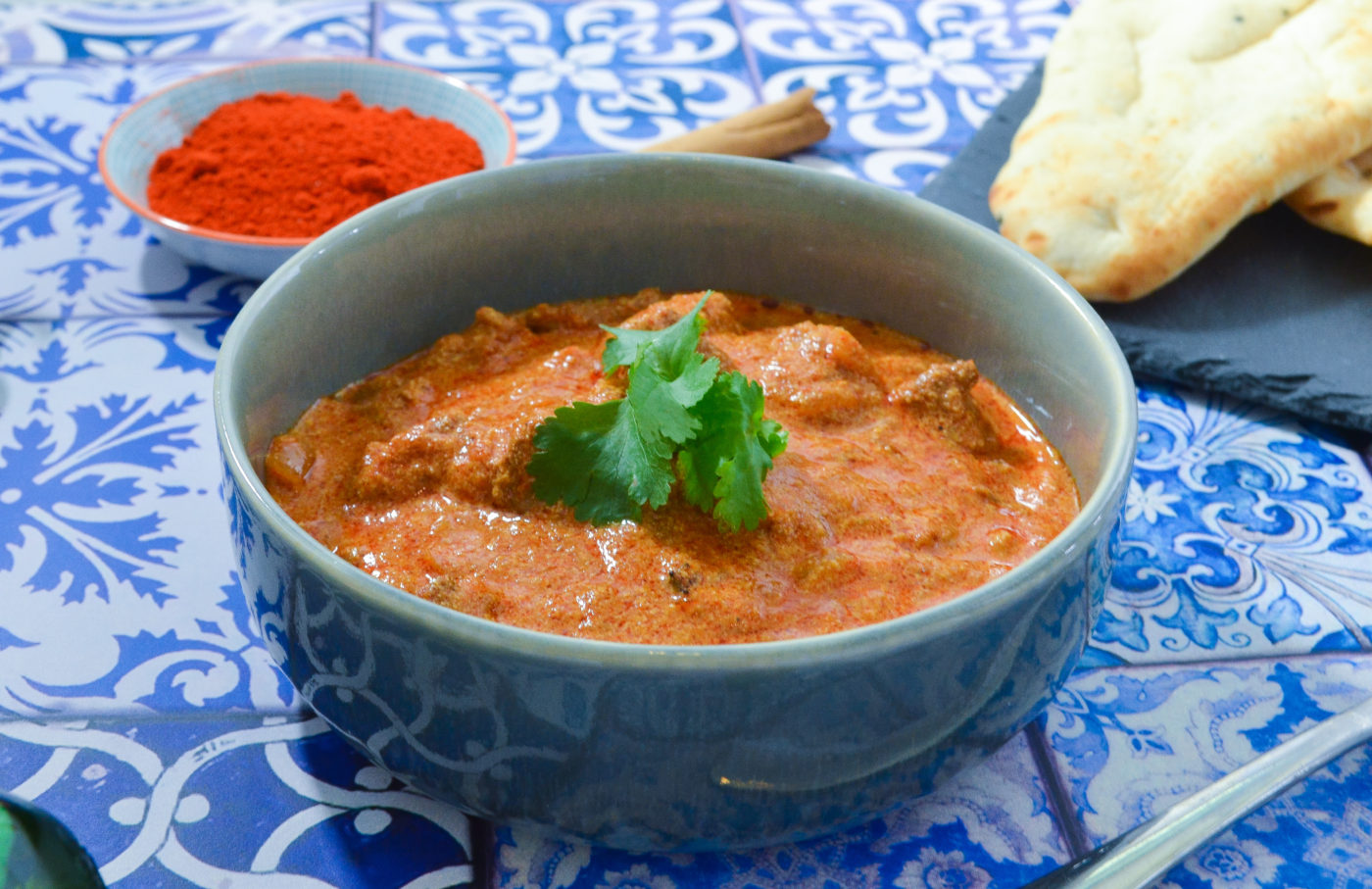 Servings wise this is fairly flexible. It would be enough to feed four of me, with rice and bread, but maybe two if you really like a lot of meat. This is quite a lot of ingredients at first glance I know, but you’ll probably find you have a lot of them already so don’t be put off.

Start by heating the ghee in a large, heavy based pan. Do not try the fancy fire bit. Add the cinnamon stick, cardamom pods and cloves and fry for a few minutes. Add the onions, turn down the heat a little and cook for around 10 minutes until they’re soft. Add the garlic and fry for another few minutes before adding all of the ground spices. 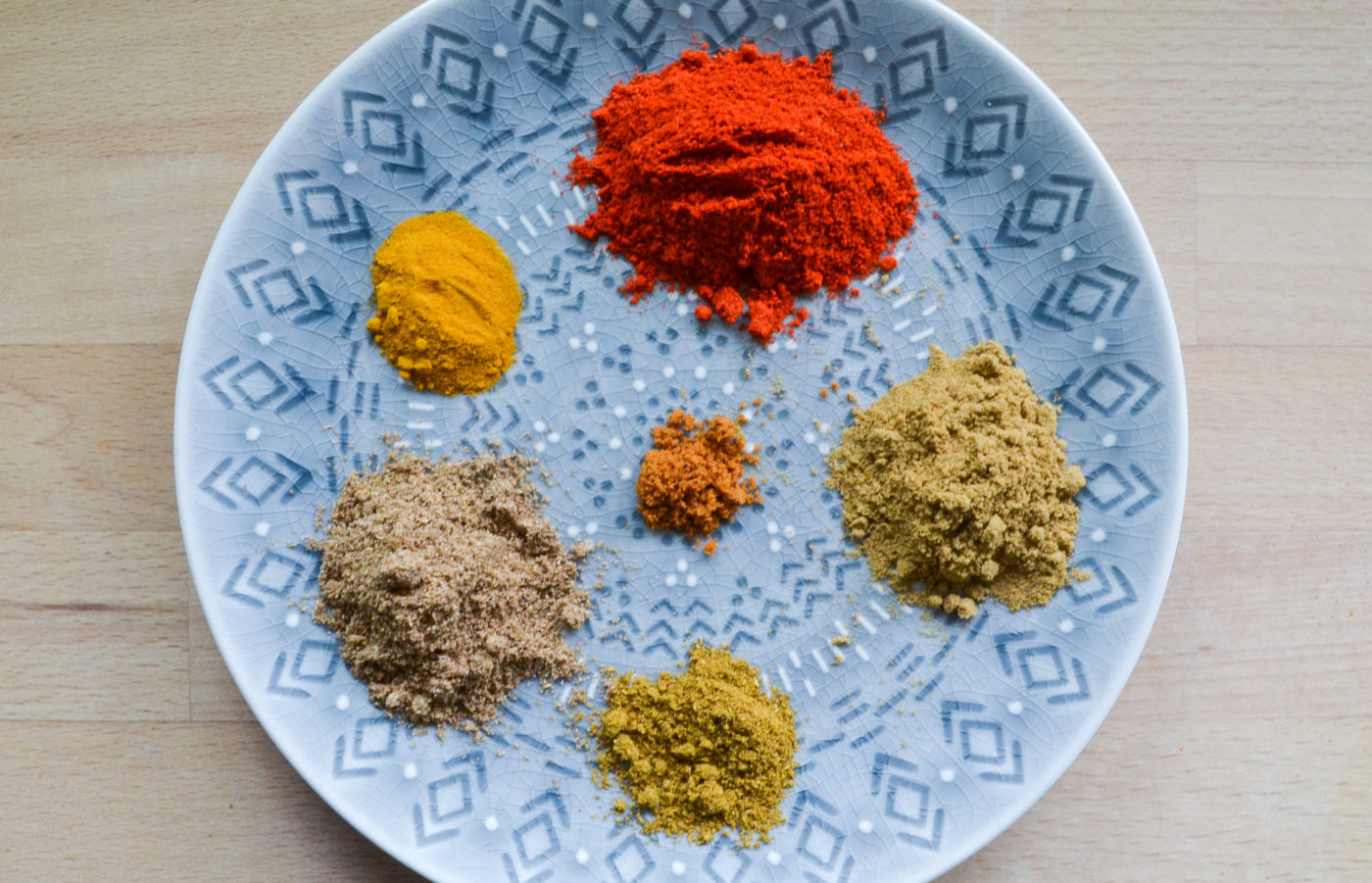 Cook just for a minute or so and then add the tomato puree, give it all a stir before adding the lamb, cooking and stirring for 2-3 minutes until the meat is well coated. Add the water, cover and simmer for around 90 minutes until the lamb is tender. Stir through the natural yogurt and serve, garnished with coriander. Enjoy with rice and naan bread and ideally a Maharaja’s Mistress but a Kingfisher beer would also go down a treat.

For more lamb inspiration, check out the recipes on the ‘Lamb. Try it love it’ website. 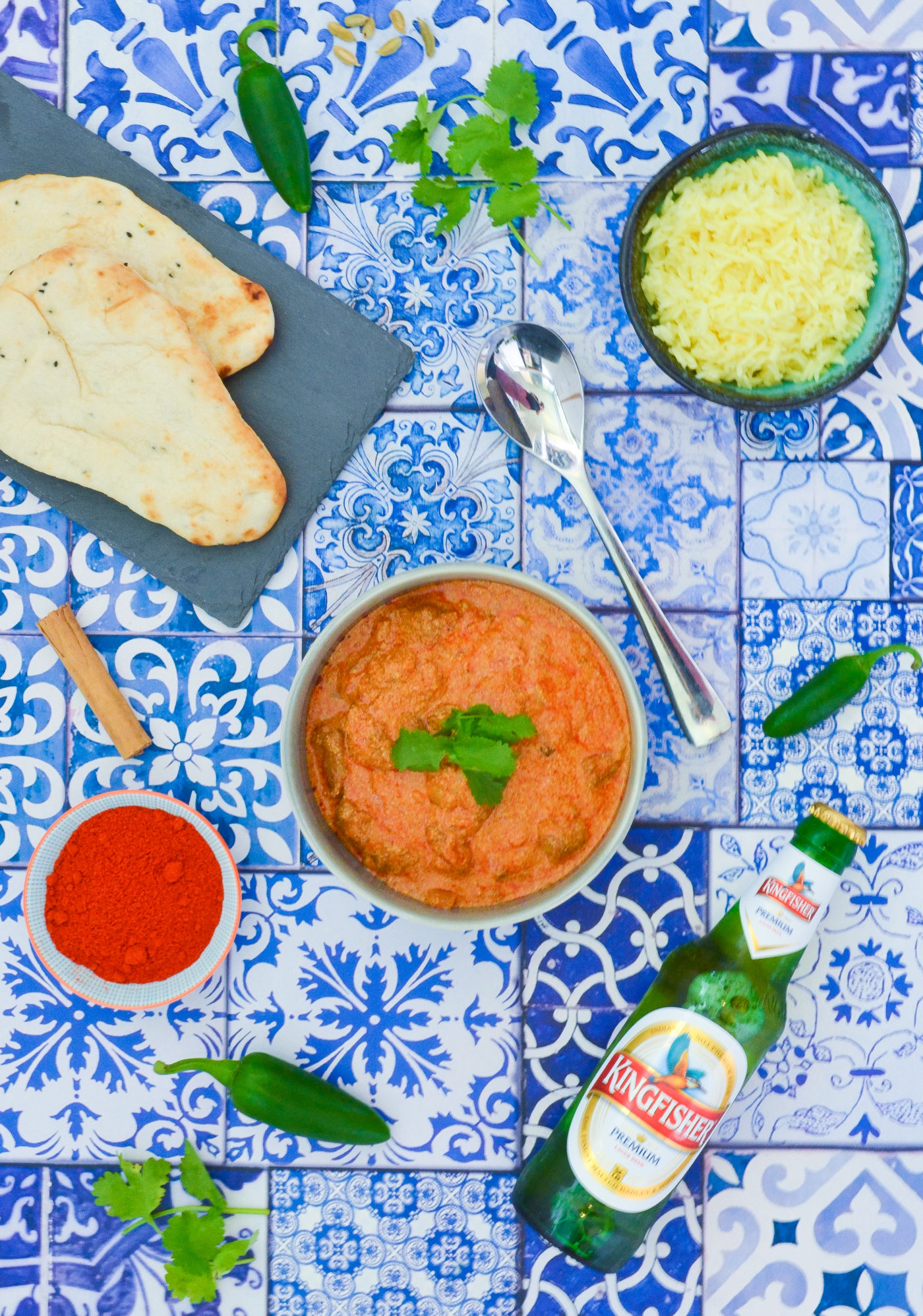