I’ve been wanting to make a ham and cucumber pizza for ages now.

Every time I make one of my postcard lists it gets transferred – ‘homemade ham and cucumber pizza’ tacked on the bottom of every scrape of paper on my desk. It’s been getting a bit annoying to be honest, and as pizza accounts for two of Belle’s favourite foods (delivered and non-delivered) and eating pizza while watching TV has been shown to be the secret of happiness, I thought it was about time I got on with it.

Ham and cucumber has always been one of my favourite food combinations. Legend has it that as a child it was all I would eat, and that small plates of ham and cucumber would be left strategically around the house for me to happen upon and nibble. Still now it’s probably my favourite ever sandwich – soft white bread, real butter, ham and cucumber. You can’t beat it.

In my teens I took it to the next level and discovered the joy that is the toasted ham and cucumber sandwich. You don’t toast it as in put it in a sandwich toaster – that would be rank – you just toast the bread and then make it like a regular sandwich, only with toast. This variant actually works very well without the ham – just butter and chunky slices of cucumber.

If you’re screwing up your face at this point then all I can say is don’t knock it till you’ve tried it. I remember making it once for this boyfriend,* when I was 21, and him looking at me very suspiciously. (He was the man who introduced me to exotic things like pesto and freshly ground black pepper remember.) He ate it though, and was impressed. I won him over with my toasted cucumber sandwich skills.

For a long time then I’ve wondered why no one makes a ham and cucumber pizza. We have ham and pineapple, ham and sweetcorn – why not ham and cucumber? Like the toasted sandwich, I’m not suggesting you cook the cucumber, rather that it gets added before serving, like so many pizzas seem to do nowadays with rocket.

Chopped up on the side. Sort of. 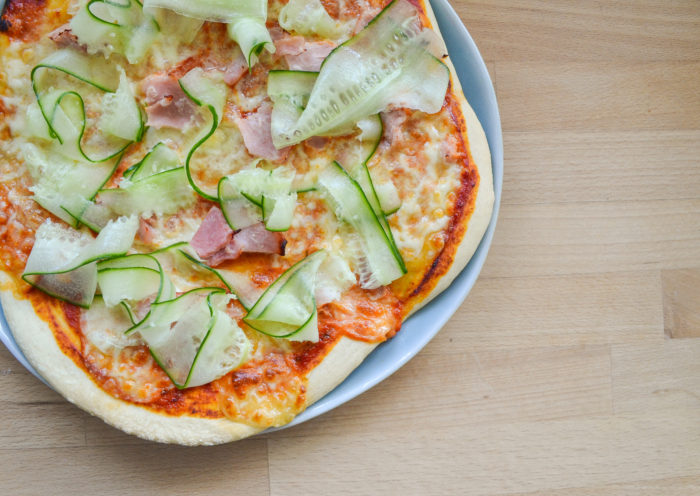 Now you could buy a ready made pizza base for this or, if you were feeling super lazy, just buy a ham pizza and stick some cucumber on top. Seriously, it doesn’t need to be a big deal, no ones watching. (Hopefully.)

There is something nice about making dough though.

A lot of people say that the kneading is therapeutic, but actually the kneading is probably my least favourite bit. Ergh, it’s such an effort isn’t it? My favourite bit is the rising. I love how you put the dough into a bowl one size and, as if by magic, it GROWS. I love the soft, airy texture of the risen dough, stretched tight around the surface. It’s magical.

My dough making skills are a bit hit and miss normally (see above about not really liking the kneading bit) but this pizza dough recipe turned out really well – not too stodgy, but with a good amount of squish.

To make your own ham and cucumber pizza, including homemade pizza dough, you will need:

For the pizza dough:

These quantities made two pizzas that I’d say were about 10 inch each. Plenty for a family of four to have half a pizza each with some salad. (Who am I kidding? Have chips.) 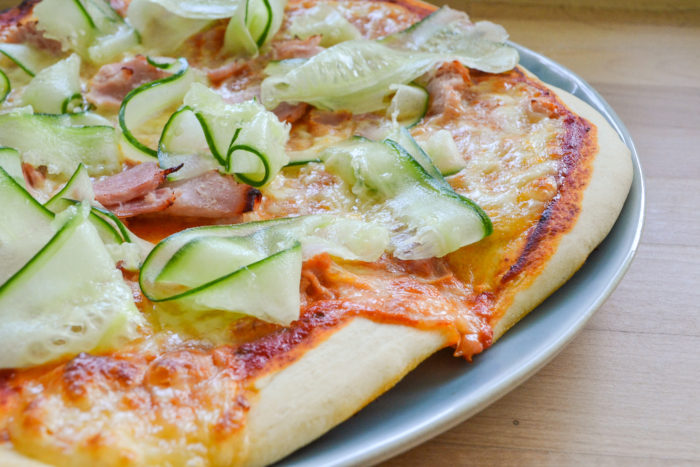 Factoring in time for your homemade pizza dough to rise, you’ll need a good two and a half hours at least for this from start to finish.

First up, make the pizza dough. Mix the flour, yeast and salt together in a large mixing bowl and stir in the olive oil and milk. Then gradually add the water, mixing well until it forms a soft dough. You may need to give or take a bit on the water, just see how you get on.

Turn your dough out onto a lightly floured surface and knead it for around five minutes (yawn) until it’s smooth and elastic. Pop it in a clean bowl, cover it with a damp tea towel, and leave it to rise for around a hour or until doubled in size. (I put mine outside yesterday on the hottest day of the year so far and it was nudging the tea towel after half an hour like some kind of sci-fi sea creature.)

Knock it back, knead it again for a few minutes, and stick it back in the bowl for another 30-60 minutes until it has risen back up.

Preheat the oven to 220 degrees.

Split your dough in two, roll into balls, and roll each ball out until it looks like a pizza base and you think to yourself ‘ooh, this looks like it might actually be pretty good!’ Pop each base onto a large baking sheet. I sprayed my baking sheets with the one cal cooking spray for non-stick purposes.

Next spread your pizza bases with tomato sauce. While you can buy pizza toppings or passata or something like that, I just used tomato puree, mixed with equal parts water, with a sprinkle of herbs added. I’m not a massive fan of loads of tomato sauce on a pizza so this was just enough for me, but you do you.

Slice the mozzarella and add it to the pizza along with the ham.

Bake the pizzas in the oven for 10-12 minutes until the bases are turning crispy around the edges and the cheese has melted. While they are cooking, use a vegetable peeler to thinly slice the cucumber lengthways. 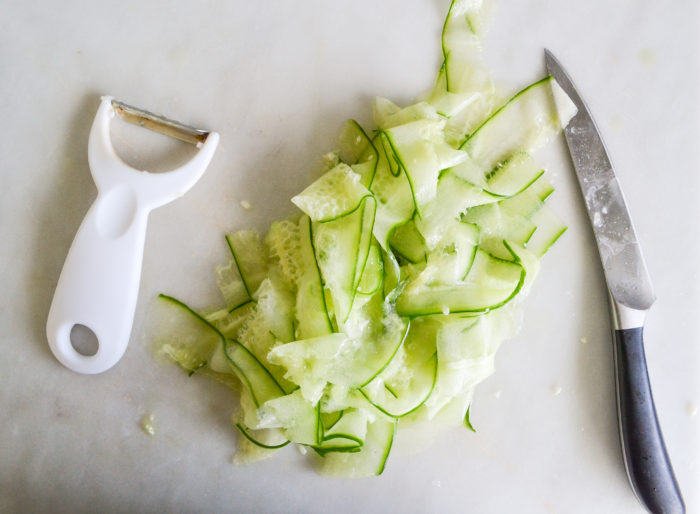 Once the pizzas are cooked, take them out of the oven and transfer them to plates or, if you want to pretend you’re in a fancy restaurant, some kind of reclaimed roof tile or slab of wood that’s impossible to pick up or clean properly.

Leave the cucumber until you are just about to serve, for maximum crunchy freshness, and then just sprinkle on top.

And that’s my homemade ham and cucumber pizza! What do you think? I loved it, although I suspect part of the pleasure was just being able to finally cross it off all my lists.

Would you give ham and cucumber pizza a try? 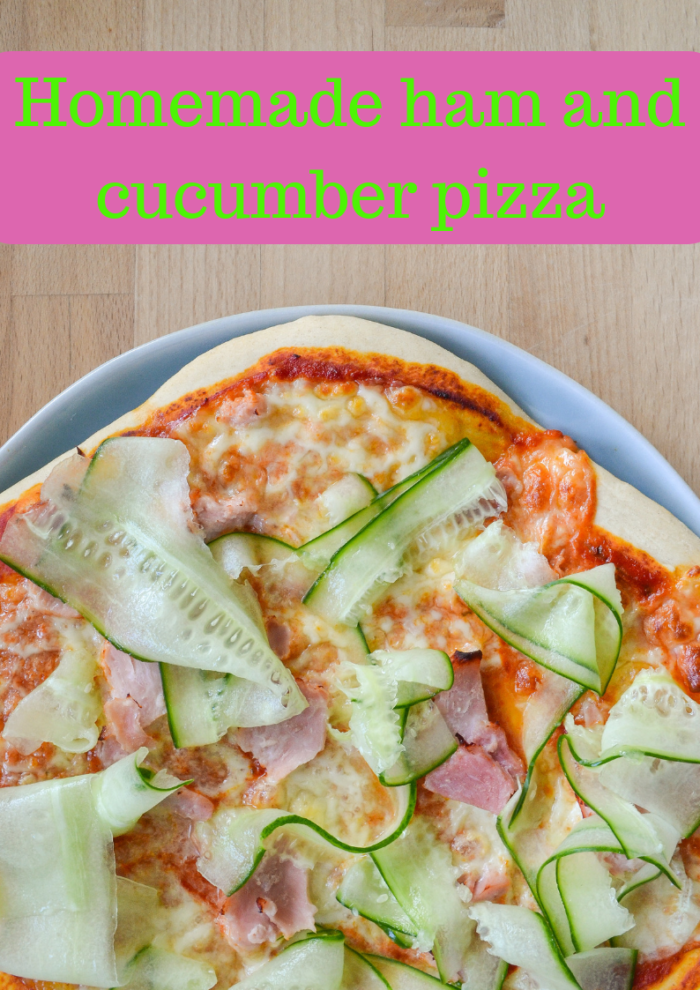 *I can’t believe it’s five years since I wrote that post about that boyfriend! I welled up a bit when I reread it. He was ace.