I was gifted these treatments in exchange for this review

‘I keep being drawn back to your womb,’ said Lisa, her fingers exploring the soles of my feet, ‘does that mean anything to you?’

It didn’t. But that was a good sentence wasn’t it?

‘There’s also a spot in your lower back, left hand side,’ she said, ‘that feels like it might be painful.’

I started a bit at that, as I actually had my left fist discreetly placed under a spot on my lower back that, ever since my car got hit by an ambulance about 20 years ago, has hurt if I lie on my back for more than about five minutes.

In case you hadn’t figured it out, I was having my first ever go at reflexology, not a session with an overly sympathetic foot fetishist. What neither of us knew was that as she held my feet in her hands, connecting strongly with my womb, Bee was at the maternity hospital having an injection to start inducing labour. Coincidence maybe, but then I do feel sick if Belle has a migraine, so who knows.

The reflexology was part of a selection of treatments that I was gifted by Beaux Health and Wellbeing and Tia Brown Natural Aesthtics. Beaux is a centre on The Crescent in Taunton, owned by a lovely woman called Lauren, and Tia offers advanced skincare treatments at Beaux as one of several locations across Bristol and Somerset.

When I was in my 20s and early 30s I was never really a spa kind of girl. Being poor probably had something to do with it, but I just never found the idea of being massaged or anything like that relaxing. I did get gifted a massage as a birthday present once and I didn’t like it at all – I was so tense, lying there wondering which bit of me she was going to touch next. I don’t think I quite got it. I was always rubbish at small talk too. It’s only recently that I’ve started half enjoying going to the hairdresser.

As I’ve got older though, and perhaps a little less self-conscious and better at chatting, I’ve started to ease myself into the idea of beauty and spa treatments. It turns out that lying down in a darkened room full of lovely smelling oils while someone undoes all the knots in your back can actually be pretty nice.

So, it was with excitement rather than 26 year old me’s anxious reluctance that I rocked up to Beaux. 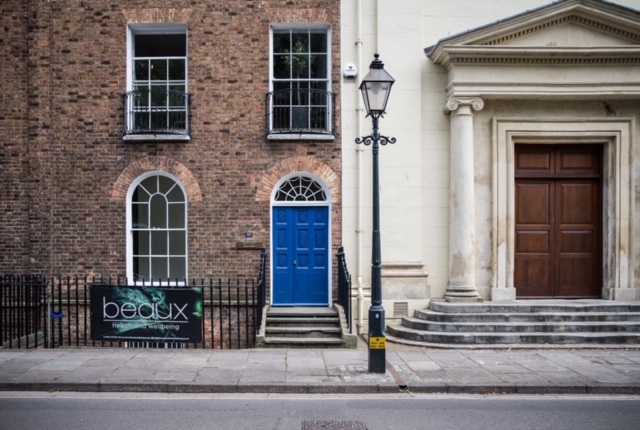 It looks so unassuming doesn’t it? You’d never guess that inside was a bright, spacious treatment centre complete with a yoga and pilates studio would you?? I used to share an office on the same street, so I know what lovely buildings they are, but going up the stairs to Beaux blew me away – huge ceilings, light flooding in through the huge windows – it’s beautifully done.

It’s one of the things I really liked about Beaux – they are all about taking a holistic approach to health and well-being, with things like yoga and happiness massages sat alongside the more traditional manicures and facials. The decor and feel of the building are both important parts of the wellbeing process. 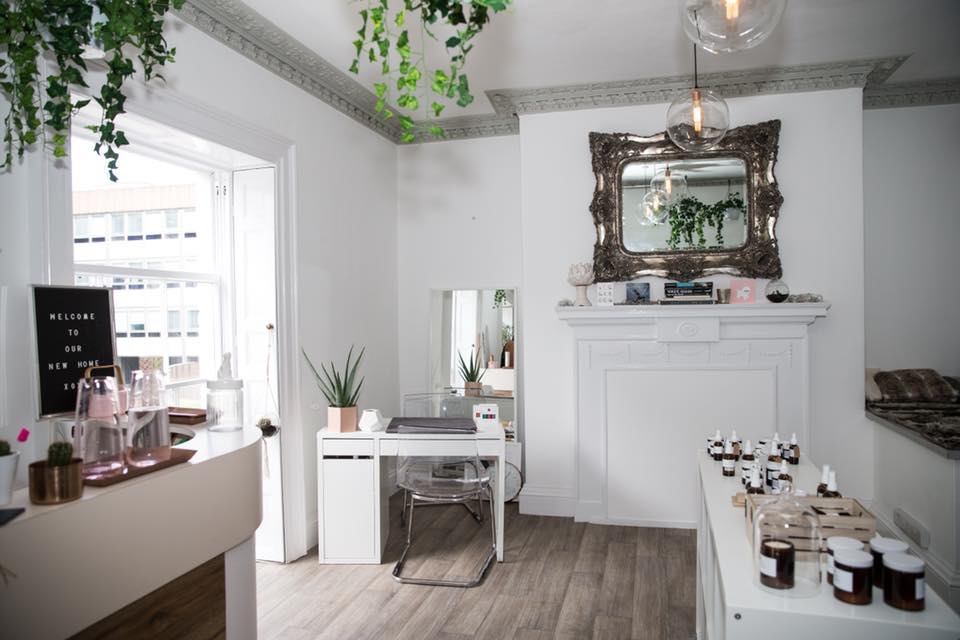 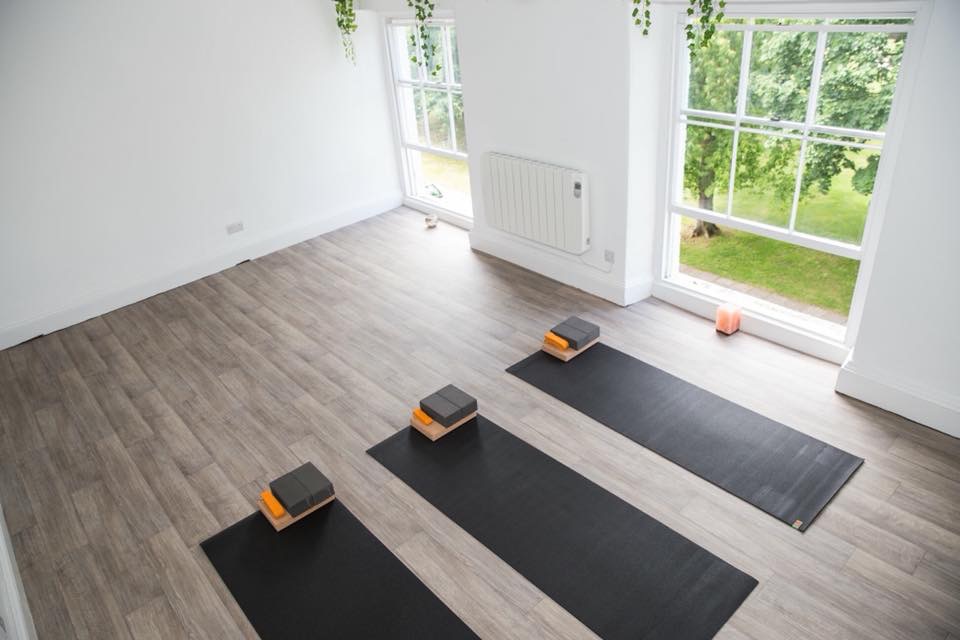 First on the agenda for me was a pedicure.

I’ve never had a pedicure before, but apparently you can’t really tell. ‘You have lovely soft skin on your feet,’ Carly told me, as she plopped them into a bowl of warm water.

‘Oh that’s because when I go in the bath I scrape the dead skin off with my finger nails!’ I said. (The ‘getting better at chatting’ has gone way too far the other way if anything.) It was jolly nice though, and now I have sunny yellow toenails, which is always nice. 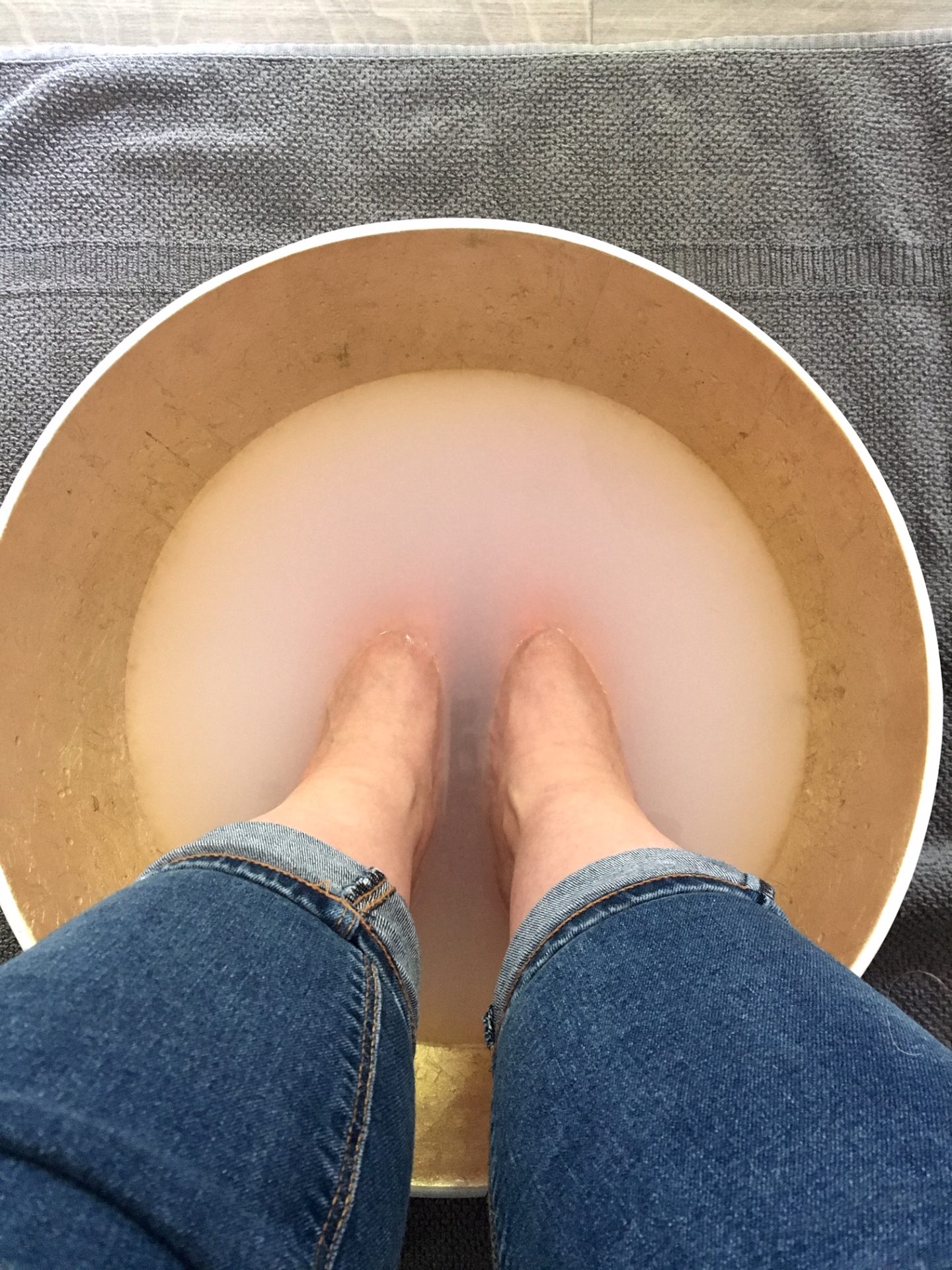 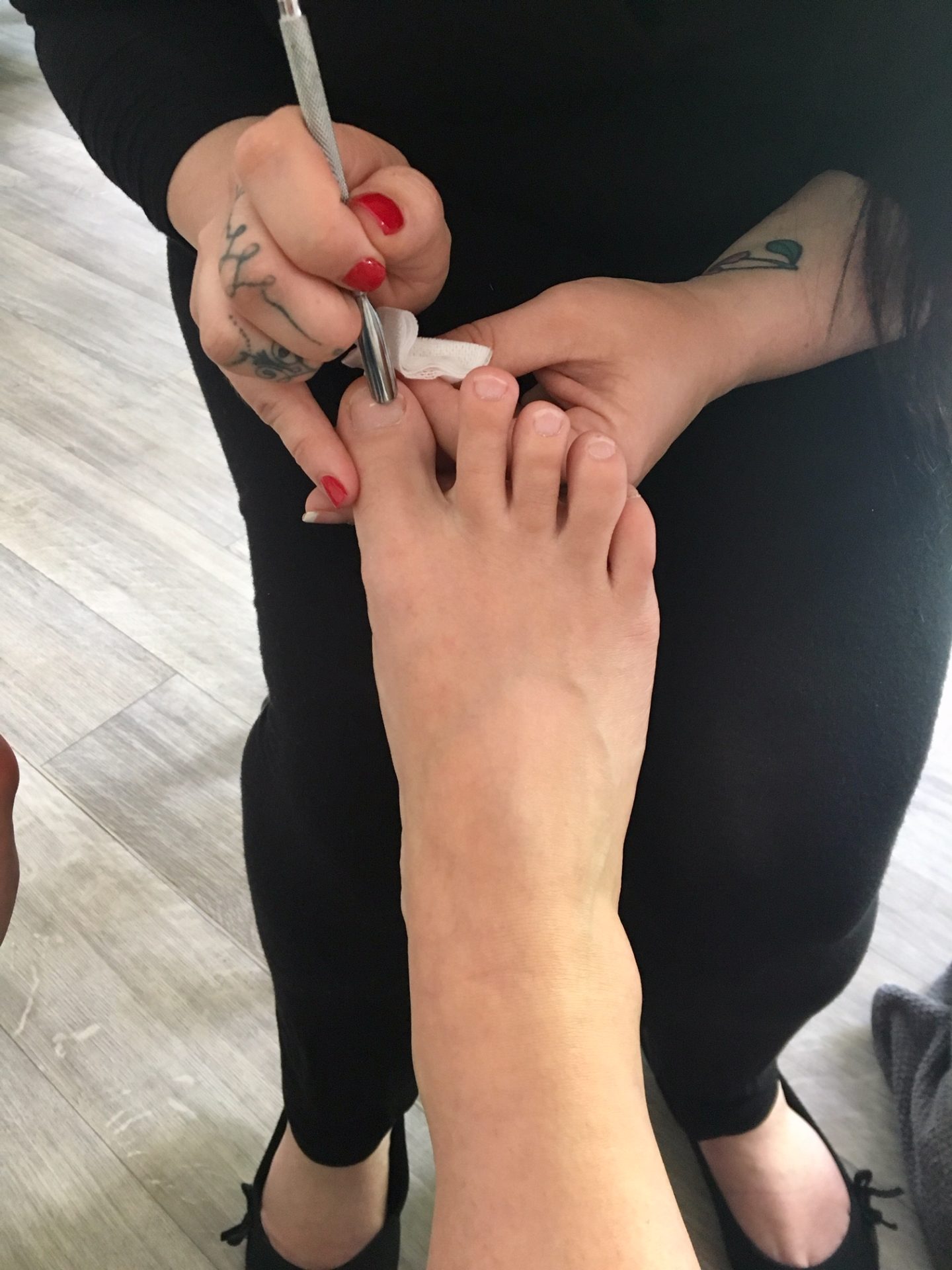 Before I moved on to the reflexology, which I’ve told you about already, it was time for my facial with Tia, who uses one of the treatment rooms at Beaux to offer a range of advanced facial treatments through her company, Tia Brown Natural Aesthetics.

For the less beauty savvy amongst us (i.e. me) an advanced facial is a step up from someone just giving you a bit of a cleanse and a face mask, but not as far as surgery. Procedures are only minimally invasive, if at all, and there are no lengthy recovery times. It’s a kind of middle ground where the treatments make a real and significant difference to your skin, whilst still being as natural and ethical as possible. (You can see the full range of treatments here.)

I was a bit nervous as I’ve never had any kind of advanced facial before, but Tia has absoltuely masses of qualifications and experience, so I knew I was in save hands. The treatment that I had was the Million Dollar Facial, which ‘provides deep skin exfoliation to remove dead skin cells and non-terminal hair, polish the skin, flush toxins, stimulate collagen production and cell turnover.’

It does this through a combination of dermaplaning and microneedling, which are both far less scary than they sound. The dermaplaning essentially just removes a load of dead skin and then the microneedling uses small needles to make tiny pin pricks, activating a healing response in the body. As the skin repairs, the natural production of collagen and elastin is triggered, helping to plump the skin and improve texture.

The dermaplaning was really good – basically the professional equivalent of me scraping the dead skin off my feet, but done with a medical grade scalpel. I have quite oily skin, which is prone to clogging, especially on my forehead, and as soon as it was done my skin immediately felt smoother and brighter.

Dermaplaning also removes the ‘peach fuzz’ hairs on your face, creating a lovely smooth surface for make-up. I don’t really have a lot of this so can’t honestly say I noticed a massive difference on the hair front. I was slightly concerned that it would mean a beard would grow back, but I was reassured that this definitely wouldn’t be the case and it hasn’t happened. I’ve been able to feel hairs coming back very slightly on my top lip, but they are just as soft and fuzzy as before. No handlebar moustache for me.

It would be a lie to say the microneedling was pain free, it is needles in your face after all, but it was uncomfortable more than painful, and over really quickly.

For about 24 hours afterwards I felt a tiny bit tender and warm – a bit like I’d spent a long day in the sun – but that soon faded and there were no other side effects. You do have to take extra care of your skin for a week or two afterwards, and make sure to wear sun screen., but that’s it.

It’s about ten days on now, and I definitely have felt that my skin has been brighter and smoother. Here’s a picture of me this morning, straight out of bed, no editing: 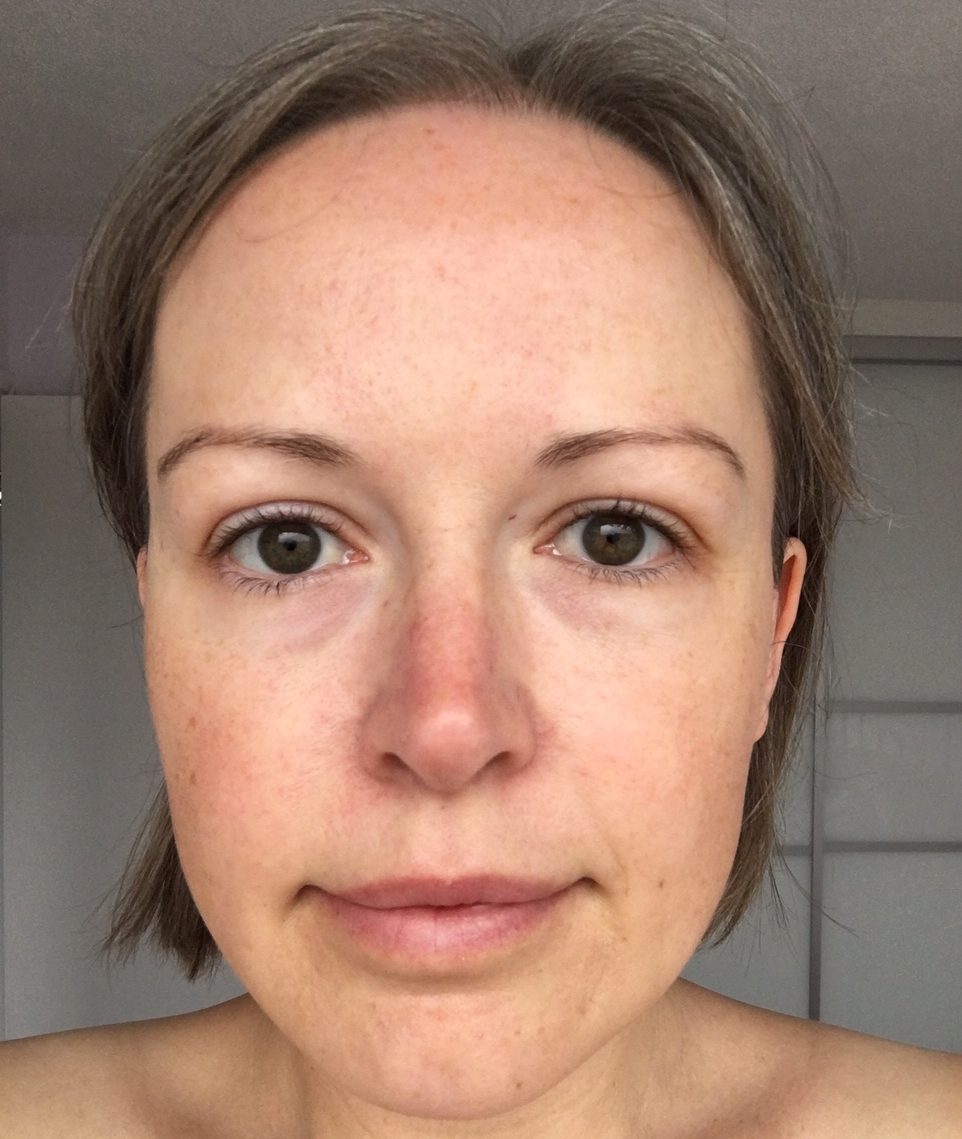 Not bad for a Granny right??

More than any short term effects, I wanted the million dollar facial to make me pay more attention to my skin in general. When I had my hair cut a couple of months ago it was to force myself to take better care of my hair, to choose products more thoughtfully and generally just NOTICE it.

I wanted the same for my skin.

I’ve never really had a skincare regime or spent any time or money choosing products, but I know that I can’t get away with this forever, and Tia’s facial has been the perfect way to kick start more of an appreciation for my skin and the need to look after it. I don’t know about a million dollars – I think that kind of motivation to take care of yourself is priceless.

Have you ever had an advanced facial?

Do you enjoy getting beauty and wellbeing treatments and do you have a favourite?