We were loaned the Peugeot 5008 for a week for the purposes of this review. All opinions my own. 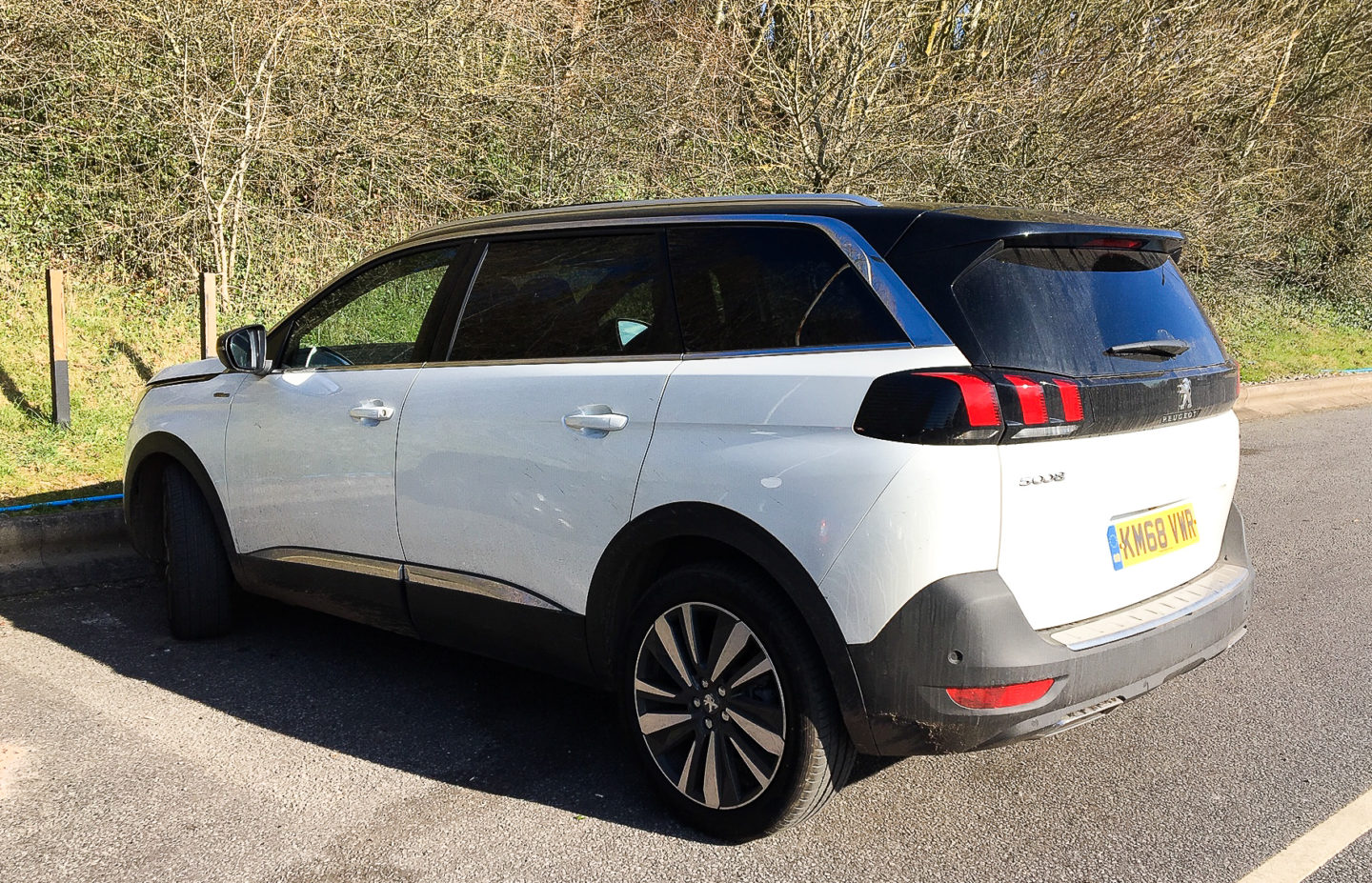 A couple of weeks ago we were loaned a Peugeot 5008 SUV to drive around for a week. On the one hand I was excited – it’s always lovely to drive something that doesn’t need topping up with oil every few days – but on the other hand I was anxious. We’ve done a couple of different car reviews lately and I couldn’t help but wonder what I was going to find to say about it.

That’s kind of the trouble with new cars isn’t it? Unless you’re spending huge amounts of money, they’re all fairly similar in what they offer, all incredibly safe and comfortable and practical. I actually took part in a video last year that was comparing compact SUVs, and they were coming up with all kinds of unusual tests just to try to tell them apart.

With the Peugeot 5008 then, I was worried that I wouldn’t have anything to say other than ‘the back seats were really comfy’ and ‘I found it really smooth to drive.’

Fortunately I was proved wrong. The Peugeot 5008 goes above and beyond a lot of the cars I’ve driven over the last few years, as though it wanted to make the point to me that yes, it might be spacious and intuitive to drive, but it can also give you stuff you’re not expecting. It didn’t come as a surprise to find out that it recently won the What Car? award for best large SUV.

For starters, it ticks loads of the family car boxes in that it is HUGE, with a massive boot, options for extra seats in the back and loads of room in the front for the driver and passenger. The back seats can take three individual car seats too, which I know can be an issue in some cars. It was so big that when we got back in our usual car, Belle and I felt peculiarly close to each other – something I’ve never noticed before.

Here’s a little clip from Fifth Gear which shows off the flexibility of the seating and storage. (The butterfly opening storage in the front was one of Belle’s best bits!)

For me, what sets the Peugeot 5008 apart is less how it actually drives which is, as you’d expect, pretty damn well, and more about the whole driving experience. I guess that’s what you pay for with a car like this – the extras that make driving more enjoyable and comfortable, both for the the driver and the passenger.

The 5008 features the i-Cockpit design, which means you get loads of information on display on the dashboard, and also the central touchscreen. I liked that you also get a row of manual buttons for things like the satnav and heating system, so you don’t need to spend time looking for them via the touchscreen.

(If you want to see the iCockpit in action, along with several other Peugeot 5008 features, Peugeot has a series of 360 degree VR videos on their YouTube channel which are well worth a watch, if you like that kind of thing.)

As someone who is fairly non-plussed about life in general, Belle was almost passionate about the Peugeot 5008, to the point that I had to promise that when I became a rich and famous author, (just a matter of time surely?), that this would be the car I would buy. She described it as a sensory car, which she loved – (she has a few sensory processing issues) – and it certainly has plenty going on to both relax and stimulate the senses.

Our model of the Peugeot 5008 came with the Amplify system, which allows you to control different sensory elements of the car to make your journey as enjoyable as possible.

There are two preset modes – Boost and Relax – and within each all of the options are customisable.

This is a really good video that sums up exactly how it works if you want to have a watch:

As you can see in the video, there are several customisable options within the Amplify system, but I wanted to pick out a couple of our favourites. 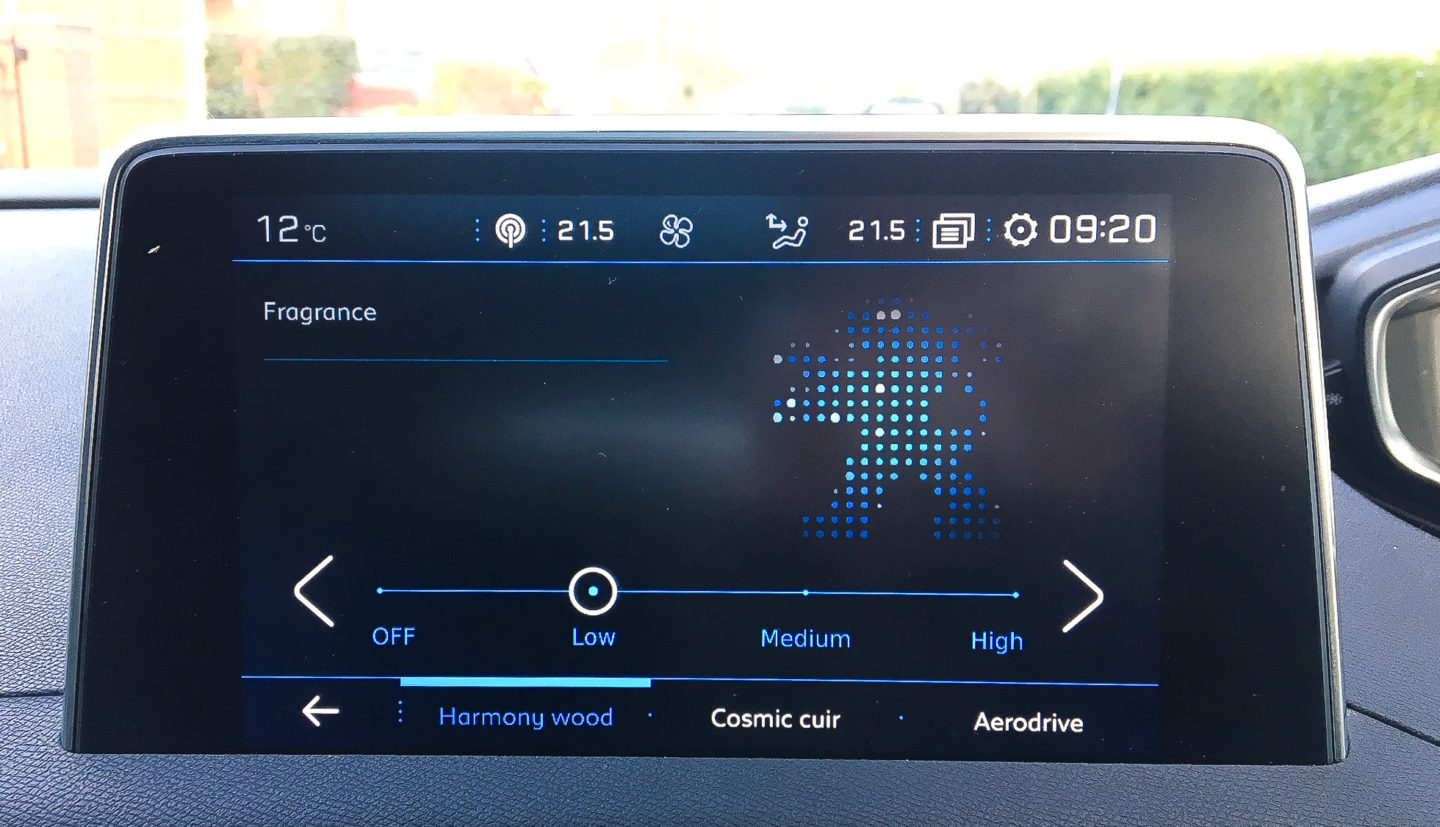 Have you ever had a car with a selection of built in scents??

No, me neither. As someone who is NOT A FAN of a car air freshener, I was fully prepared to be disgusted when I discovered the scent feature, but it was actually fairly pleasant on a moderate setting. Belle was a big fan though – cosmic cuir was her favourite. This was probably her favourite feature as part of the Amplify system.

Then there are the massage options. I have driven cars with massage options before, but only ever ON or OFF. The Peugeot 5008 has a whole range of different massage techniques, including ‘cat paw’.

You can actually drive around imagining that a cat is walking up and down your back. It’s like it was MADE FOR ME. 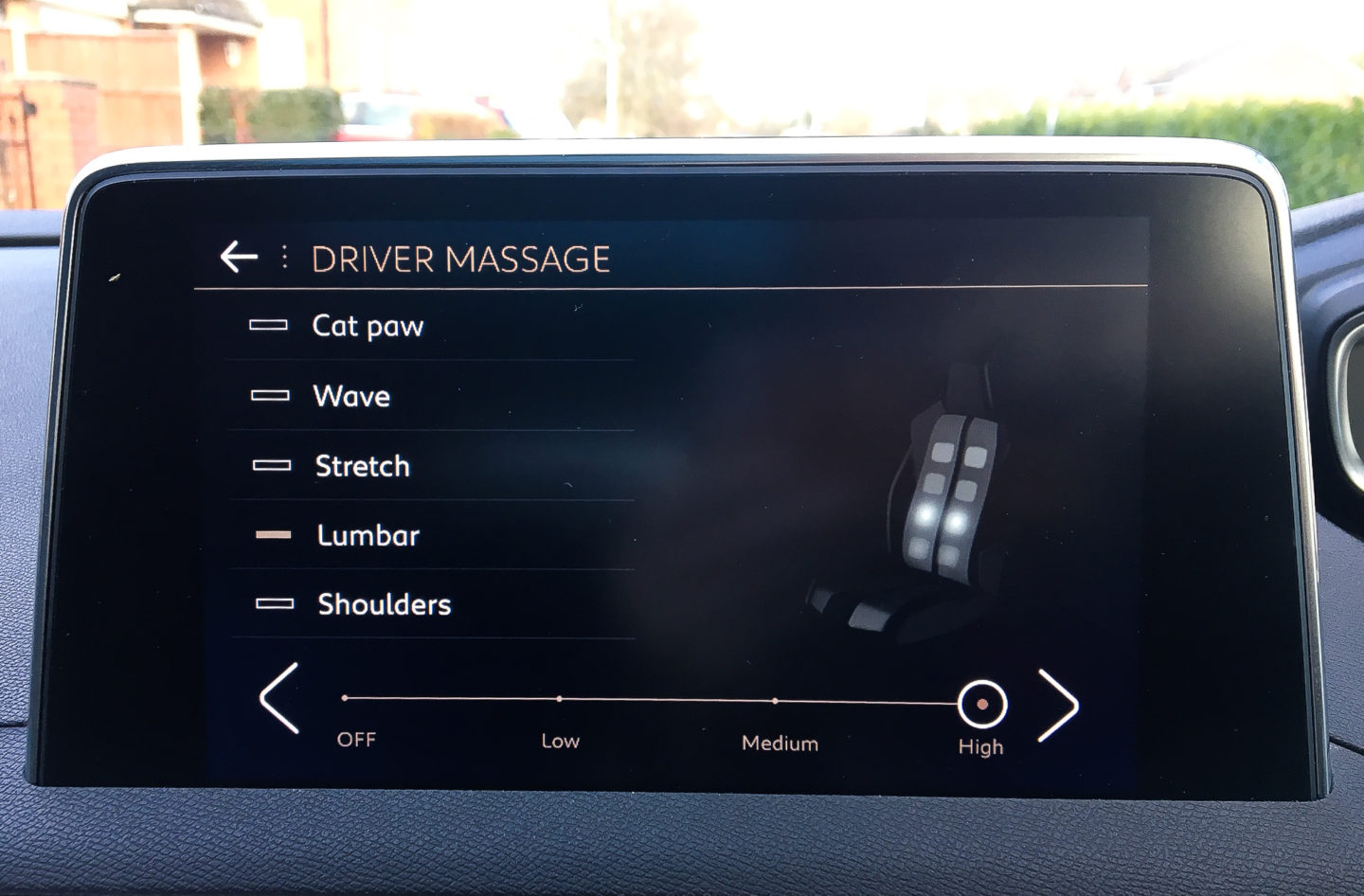 I discovered the automatic headlight dipping by accident.

I was driving along in the dark, thinking I should probably switch to full beam, and suddenly it just happened.

‘Well that’s weird,’ I thought to myself, ‘perhaps I did it without realising?’ At that moment a car came around the corner and the Peugeot 5008 lights dipped immediately. I didn’t remember having done that bit and it seemed unlikely that the Peugeot was SO intuitive that it could read my actual mind, so I waited to see what happened next. The car passed and full beam came back on.

I was sceptical to start with as I imagined it wouldn’t be quick enough to respond, and I’d end up annoying the oncoming traffic, but no, it was probably quicker that I would be.

I know that these are all just small things, some of which might seem a bit gimmicky, but remember that all these extras are ON TOP of the Peugeot 5008 being an incredibly spacious, practical and easy to drive 7-seater SUV. These definitely aren’t the only things it has going for it – it’s more that they’re cool, additional features that made driving the Peugeot 5008 just that little bit different and more enjoyable than a lot of other cars.

To finish off, I wanted to pick out a video to give you a better idea of how the car looks on the road, so I chose this one because of the really cool cave.