In association with Unite Students

I never had the opportunity to GO to university in the traditional sense.

I mean sure, I WENT – I got the degree and everything – but I already had a two year old, (teenage pregnancy and all that), so I didn’t ever do that whole ‘pack all your belongings into the back of a Nissan Micra and spend three years living in a shared house on pizza and cheap beer’ thing. I did share a house, technically, but it was with Bee, and she was too small to drink beer and we didn’t have enough money for takeaway.

From day one then, my ‘university essentials’ have been ‘an entire small two bedroom house full of things you need for a family.’

I got on with it though, it was all good.

What it does mean though, is that I had to put a little extra thought into helping Bee to make that leap from home to university, as I knew that I hadn’t had the typical experience myself and so wasn’t sure entirely what she should expect. With Belle too, if she decides that’s what she wants to do, it’s going to be a massive step, especially given how difficult she has found school over the last couple of years.

She wouldn’t be alone in feeling anxious about it though.

According to a report from Unite, 61% of students feel anxious about making the leap from school to university and only 9% –  less than one in ten – say it closely matched their expectations. This could be a good or a bad thing, depending on how you look at it, but either way we’re clearly not prepared.

The worry is perhaps not surprising given the apparent lack of information and advice from parents – 77% of 16-19 year olds heading off to university said they hadn’t been given advice on sex or mental health, 72% hadn’t had advice about relationships and 66% were in the dark about drugs.

I find that pretty shocking, don’t you?

I’m not saying I would do a big sit down ‘this is what you need to know’ type talk before they packed up the Micra, but they’re such important topics, surely they’re an ongoing conversation with young people, whether or not they go to university?

We do seem to do a bit better on the practical side.

66% of 16-19 say they’ve been given advice on things like cooking and money management, although even then, that’s a third of students going in with nothing? Throw in stats like 55% of parents not thinking their child will be able to cook a meal from scratch, and you can’t help but wonder if there is room for improvement here.

Would you feel confident in your teenager’s basic cooking skills? Could they whip up something more impressive that a massive bowl of cereal?

As a bit of an experiment, I thought it might be fun to test out just how prepared Belle might be on a practical level by gathering a few university essentials.

Mine for her were definitely on the practical side – batteries, pens, post it notes and a tin opener. I included multivitamins as I’m sure her university diet would be heavily chocolate brioche based, and some Calpol six plus as she has yet to quite master the art of swallowing tablets. 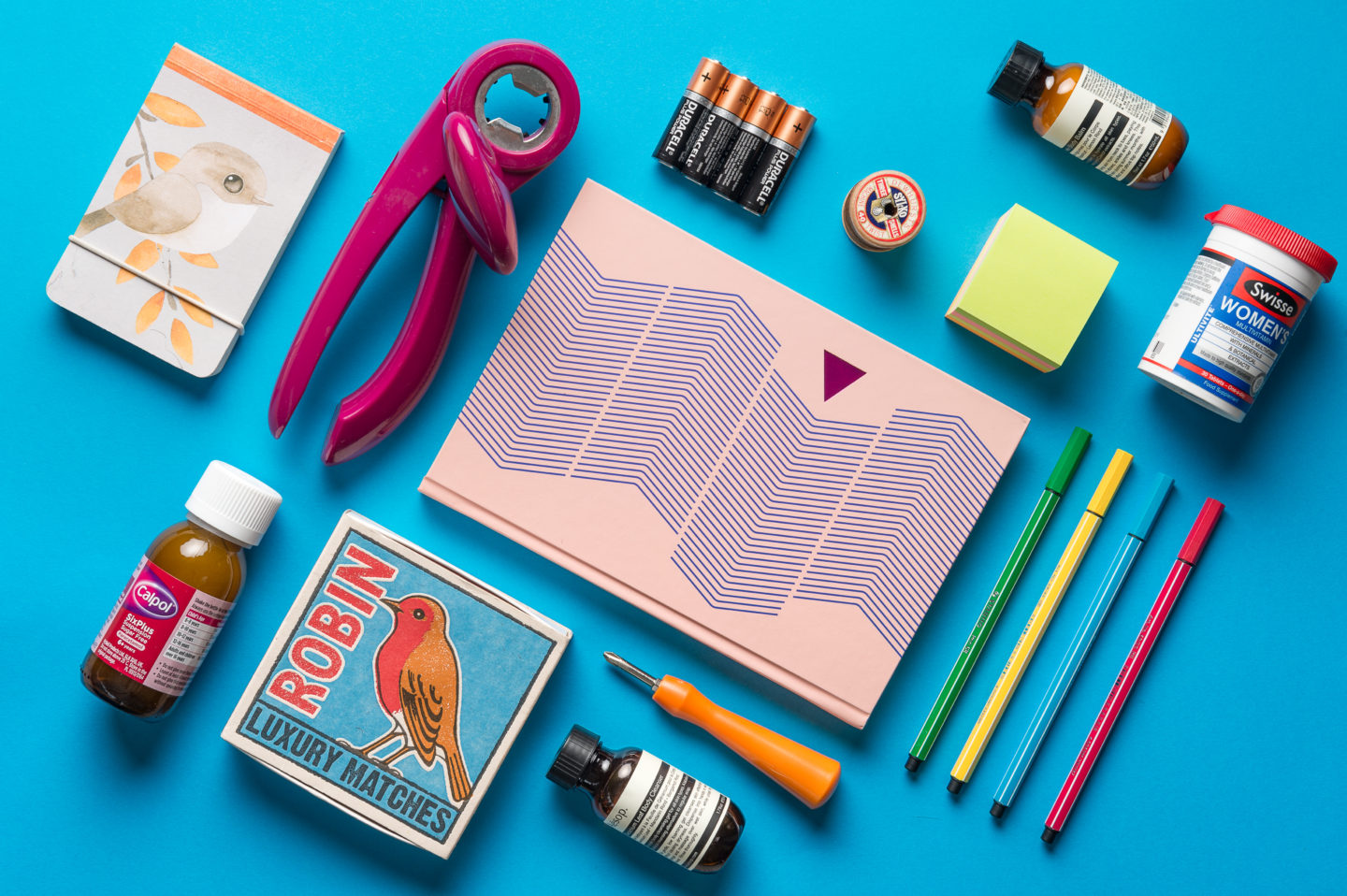 To her credit she was quick to jump on the cooking side of things and definitely wanted to include cutlery, saucepans and plates – the wooden spoon is our representation of this. She perhaps had less awareness of things like medical supplies, or household items like batteries and screwdrivers. I used a knife as my main screwdriver until I was about 28 though, so perhaps those are the sort of things you pick up as you go along?

She HAS included a roll of insulating tape and a pritt stick, which is an excellent start, plus I’ve heard you can do a pretty good job of ironing sleeves and collars with hair straighteners. 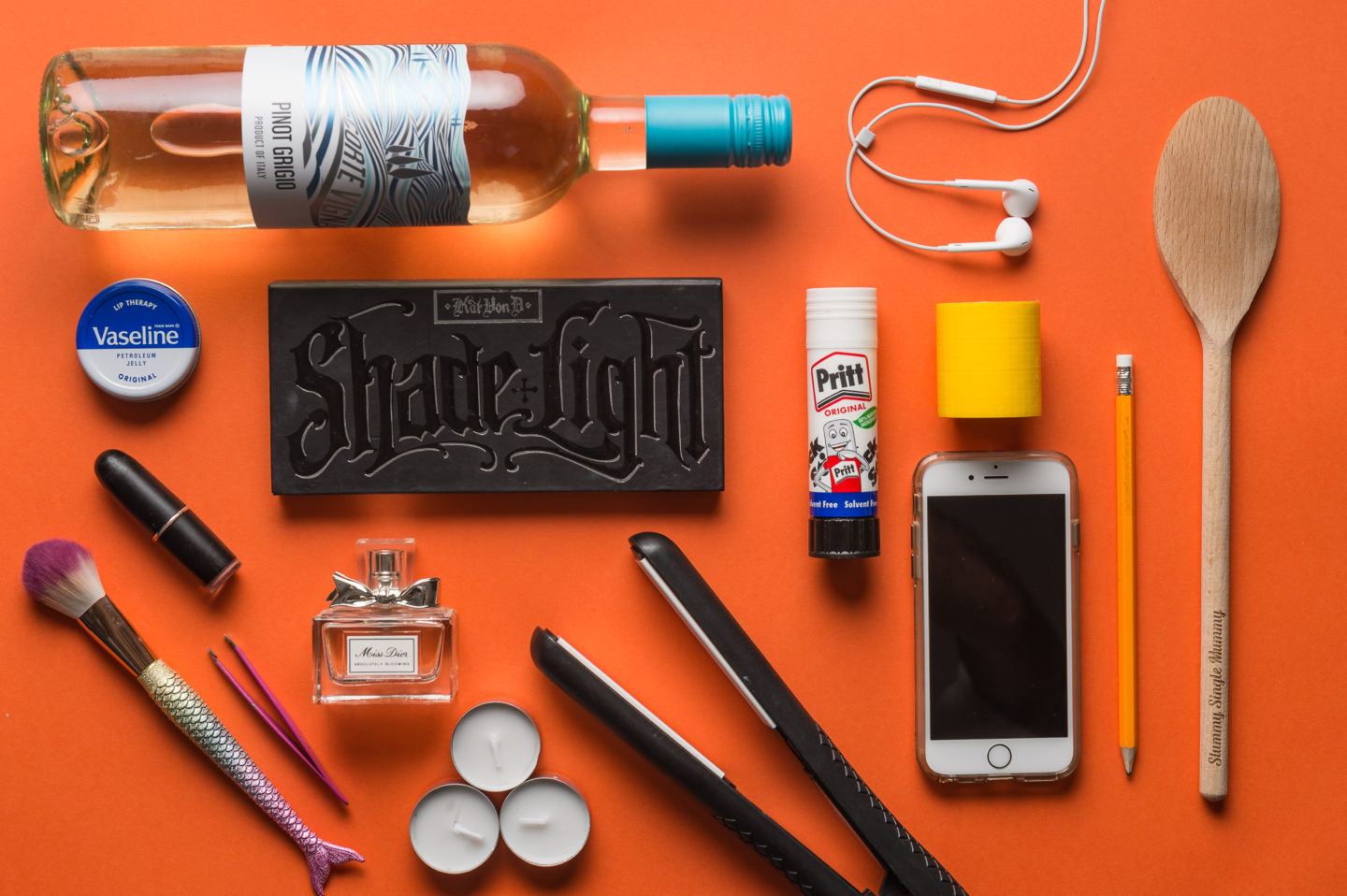 Our university essentials flat lays tie in rather nicely with a competition that Unite Students is running at the moment offering the chance to win a fantastic Nikon D3400 DSLR camera, worth £499. It’s a pretty sweet prize right?

If you fancy creating your own flat lay and entering the competition, check out Unite Students’s Instagram post below to find out what you need to do. You have until August 30th to enter. (Full competition T&Cs available here.)

🌟 DSLR Camera giveaway 🌟 . . Be in with a chance of winning a Nikon D3400 DSLR Camera 📷 by sharing your own flatlay packing pics with us. Tag us in your flatlay photo of the things you’ll be taking with you to uni and use #PackedForSuccess to enter. Ts&Cs in bio. . . If you need some inspiration to get you started here’s @fanxia0918’s flatlay- “My laptop is super important to me, it doesn’t leave my side. As you can see, I’ve customised it so that all the keys are Pokemon themed. It took a while but I love it and everyone comments on it!” . . . . . #unitestudents #competition #win #giveaway #dslr #nikon #pokemon #flatlay #theleap #universityofnottingham #apple #lotusbiscoff #heinz #apple

As much as I joke about it, I have no doubt that Belle would do a brilliant job at university. As much as she berates herself for being shy and anxious, she’s pretty clued up on a lot of things and I’d trust her to know the right thing to do, even if she felt nervous about doing it.

Most importantly, I hope that Bee felt, and that Belle will feel, that they have the confidence and knowledge to make good choices (most of the time), and that whatever happens they can always talk to me about it, or ask me things. Because as this post showed, they might grow up but they never stop asking questions.

That’s all you can really hope for as a parent isn’t it?

Visit the Unite Students website for more information about The Leap campaign, and have a watch of this two minute video highlighting some of the challenges faced by young people going off to university for the first time.