In association with Coca-Cola

How do you get kids to recycle more plastic?

When they’re young it’s easier to be creative around recycling – you can decorate recycling boxes together, create star charts and set up rewards. You can even make a trip to the recycling centre fun for primary school aged children if you go about it in the right way and have chocolate buttons for the way home.

Teenagers are generally not so easily engaged. When we moved into our new house last summer I actually bought some stickers in the shape of flowers and leaves, plus a house number sticker, thinking Belle would want to use them to decorate the outside bins. Bless me and my determination to cling to the past.

Needless to say that our outside bins remain undecorated. 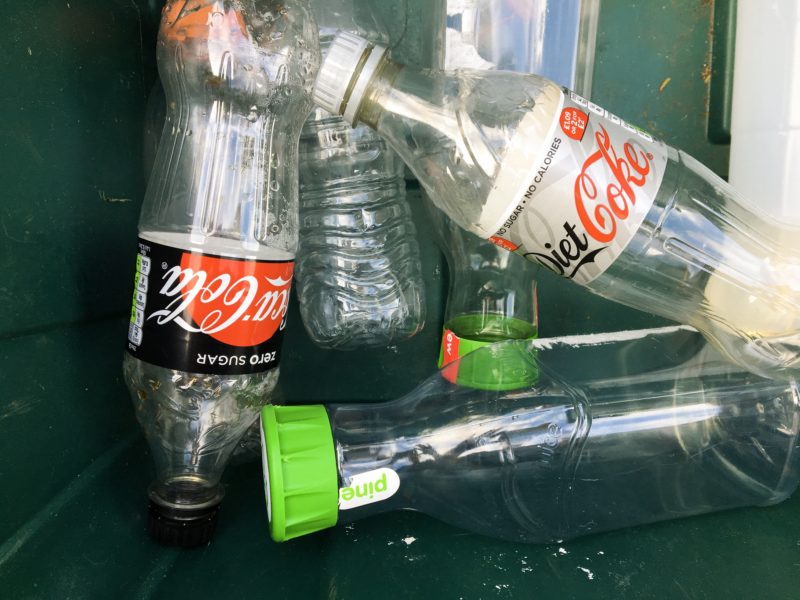 Over the next six months we’re taking part in Coke’s Family Plastic Challenge, a new initiative to support the wider sustainability strategy they introduced last year. (You can find out more about the team of bloggers that I’m part of here.)

Currently only 58% of plastic bottles in the UK are recycled*, and this is a problem for Coke. It means that there isn’t enough recycled plastic – known as rPET – in the system, which in turn means it’s harder to make bottles containing high levels of recycled plastic.

I think a lot of us (me included) don’t really think about the lifecycle of a plastic bottle. We see it as a disposable item, and even if we do recycle we probably don’t think about what happens to it next. (I just imagine recycled plastic getting made into those pens that were popular when I was young that said ‘I was made from a plastic bottle!’) Plastic bottles are not single use though – when you recycle a plastic bottle it can reused again and again to make more plastic bottles.

It’s not just about the novelty pens guys!

Basically if we recycle more, Coke can use more recycled plastic. Even just recycling one more plastic bottle a week could make a huge difference. Coke’s packaging at the moment is around 25% rPET but they have a commitment to up that to 50% by 2020 across ALL of their products sold in the UK.

This is a big commitment, as using recycled plastic actually costs more, but it’s important to them. It has to be.

So back to the original problem.

How can I get Belle enthused about recycling? How can I get her to think differently about plastic recycling, both at home and out and about? How do you get teenagers to CARE? (Haha!)

For starters you need to make it easy for them. We’ve had space issues in the past and had a system of having to take recycling straight outside, but this simply doesn’t work. Laziness too often prevails and recycling ends up in the bin.

We have a recycling box right next to the bin now. No excuses. 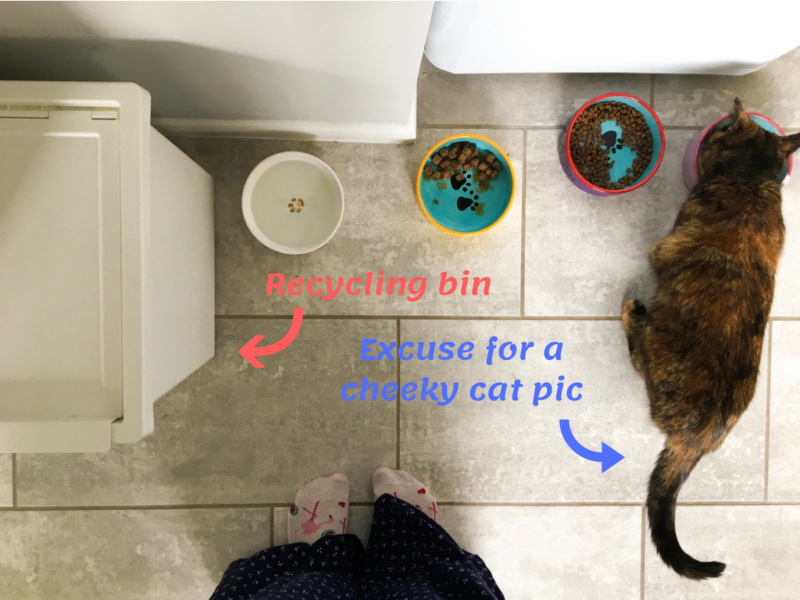 That’s all very well of course when you’re at home, but it doesn’t solve the problem when you’re out and about. Where’s the incentive to take the time to find a plastic recycling bin when you’re in the middle of town? How do you get teenagers to CARE enough to make the effort to bring plastic home to recycle?

You could start by regaling them with facts**:

If a year’s worth of the UK’s unrecycled plastic bottles were placed end to end, they’d reach around the world 31 times, covering  just over 780,000 miles.

It’s hard though isn’t it to picture what that really looks like? It’s just WORDS. Without being able to see an ocean filled with plastic debris it’s hard to get a true sense of the scale.

I think this is one of the biggest hurdles to recycling, both for children and for adults – we bury our heads in the sand because we don’t have to SEE the consequences of our actions. We throw plastic bottles into the bin without thinking. We simply aren’t consicous of the impact that not recycling has on the environment.

And that’s the nub.

To try to get Belle to take plastic recycling seriously, I knew I needed to raise her consciousness, to put her into a situation where she was forced to really SEE the impact of waste and to connect with it on a smaller, more understandable scale.

For quite a long time Belle donated some of her pocket money every month to the Marine Conservation Society, so when I was doing some research and found out that they organised local beach cleans, I decided to sign us up for one.

Initially Belle was not keen on the idea of getting up at 9am on a Sunday morning but she went with it.

What was strange was that when we arrived, the beach looked clean already. We walked down the steps onto the pebbles and I was confused. ‘Surely we’ve come to wrong place,’ I thought to myself, ‘there isn’t any rubbish here?’ 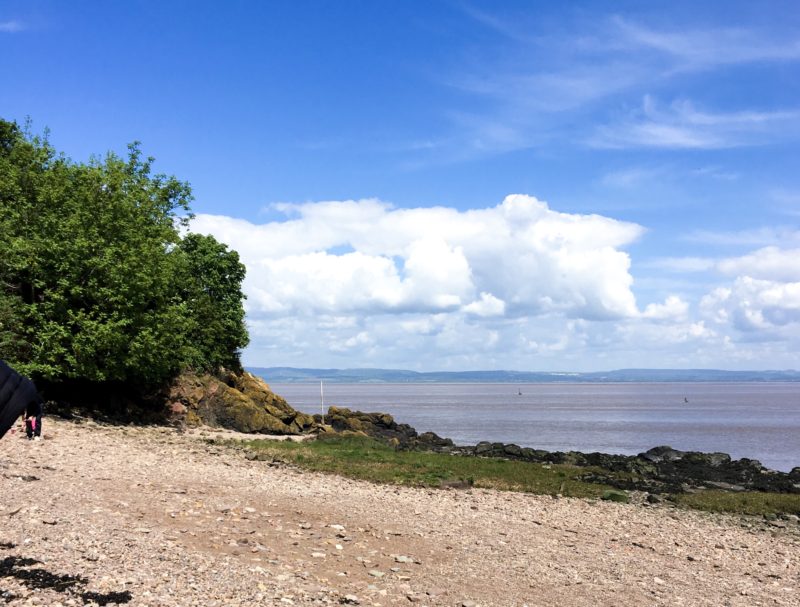 And then we started and you really LOOK and you realise that actually there is a lot of rubbish after all.

It’s almost like we’ve become so accustomed to the sight of an old plastic bottle or two amongst the seaweed at the sea line that we don’t even see it any more. Looking amongst the pebbles at all the pieces of glass and ceramics, I had to keep reminding myself that they aren’t actually meant to be part of the beach.

Belle enjoyed the beach clean way more than  we both thought she was going to. She seemed surprised by how quickly the time had passed and when I suggested we do another one soon on another beach she was positive. 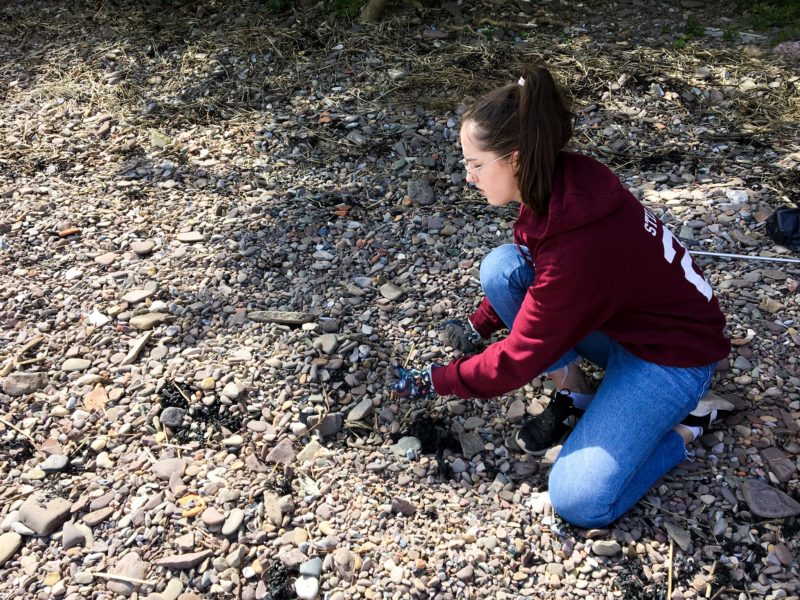 I’d been imagining that the beach clean would be a little bit tedious too if I’m honest – that I’d get a fuzzy feeling from doing something good, but that it would feel like a bit of a chore. It really didn’t though. It was actually really lovely to hang out with Belle doing something that we’d never done before and I was proud to see her getting involved. The weather was warm and it felt good to be outside doing something useful.

It just goes to show that recycling CAN be fun.

As well as the actual recycling of rubbish from the beach, the whole experience has definitely brought about a shift in the way we think about plastic as a family. I’ve started carrying reusable cutlery in my bag for example, so that I don’t have to keep using plastic spoons and forks if I’m eating on the go. I’ve stopped using plastic straws, started using my reusable coffee cup for my iced coffees, and generally I just take more notice of the materials that pass through my hands.

If you want to really get to the heart of the problem and get your kids enthusiastic about plastic recycling I’d definitely recommend a beach clean, even if it’s just going along as a family with some gloves and bags and picking up litter for an hour.

We had a really great morning, recycled a LOT, and proved that recycling is definitely about more than just remembering to put your plastic bottles in your green box.

What do you do as a family to encourage recycling? 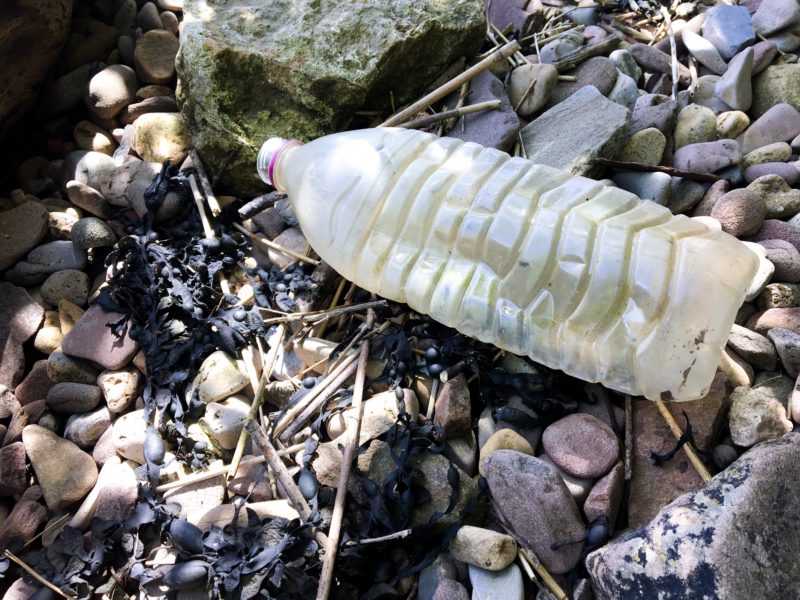