This week I got a cold sore.

I made a special trip to Wilko for cold sore cream because of this: 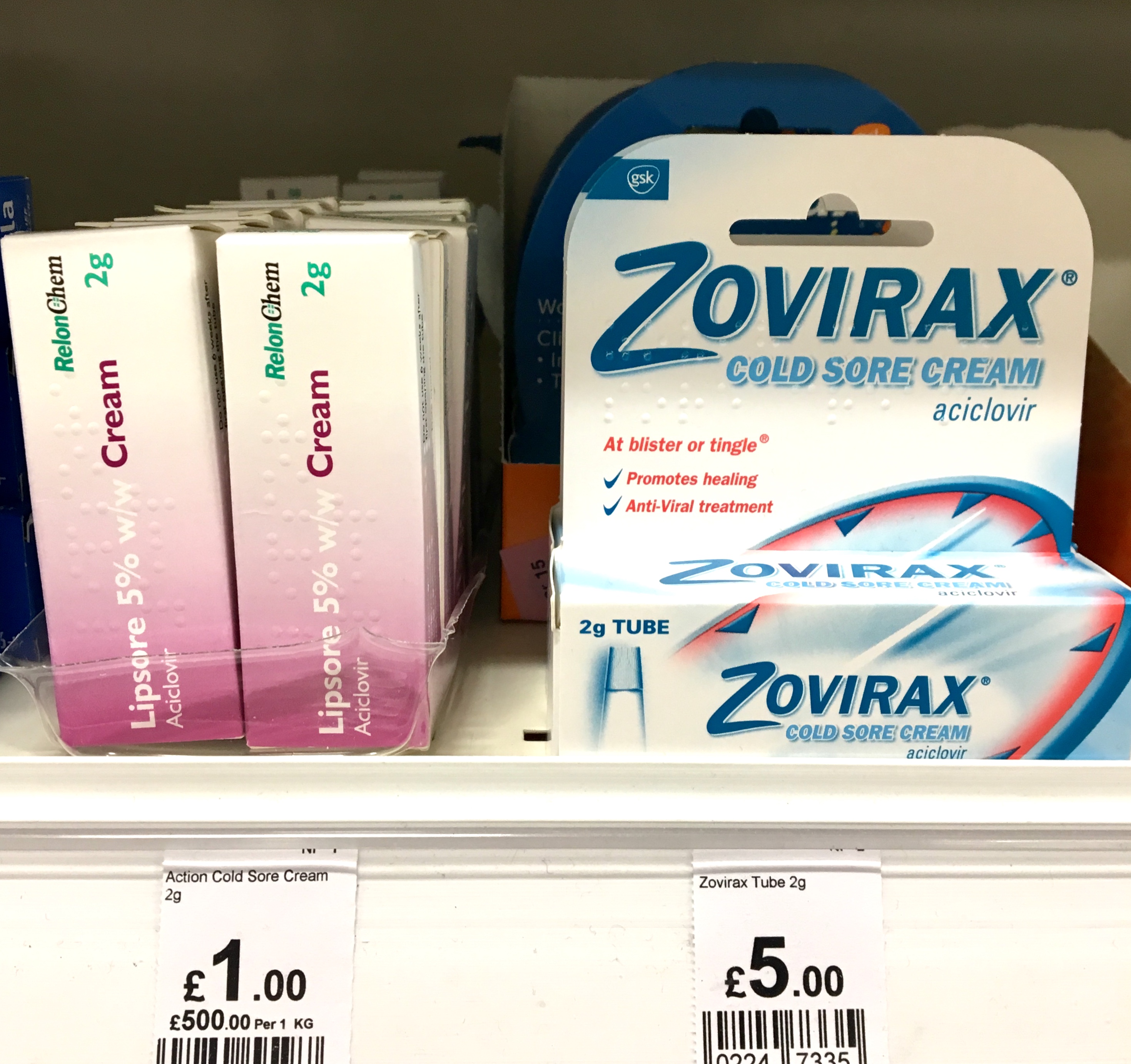 Yep, that’s two IDENTICAL cold sore creams as far as I can see. The Wilko own brand is £1. The branded version is £5. That’s FIVE TIMES the price. (Note that the Zovirax version doesn’t have a price per 1kg – perhaps it wouldn’t fit on the tag?)

There is no obvious difference between them, they both contain the same amount of the same active ingredient and they both do the same job.

Overpriced branded medication is something that has always wound me up. It just feels wrong on so many levels. Not only is it a total rip off generally, but it feels like you’re being ripped off when you feel at your most vulnerable. (Me going shopping with Belle when she is sad.)

Looking at the myriad different examples on the shelf it’s hard to believe that it even EXISTS as an industry. It’s so obviously just the same product sold in ridiculously over the top packaging, and yet people MUST be falling for it, or there wouldn’t be a market. It makes me cross to think of all of these big brands chuckling to themselves while innocent people are coughing and spluttering over their remedies.

Picture yourself with a bad cold. You’re trying to get through the day, you’re not thinking straight, you just want anything that might make you feel better, so when you see words like MAX STRENGTH you’re in. 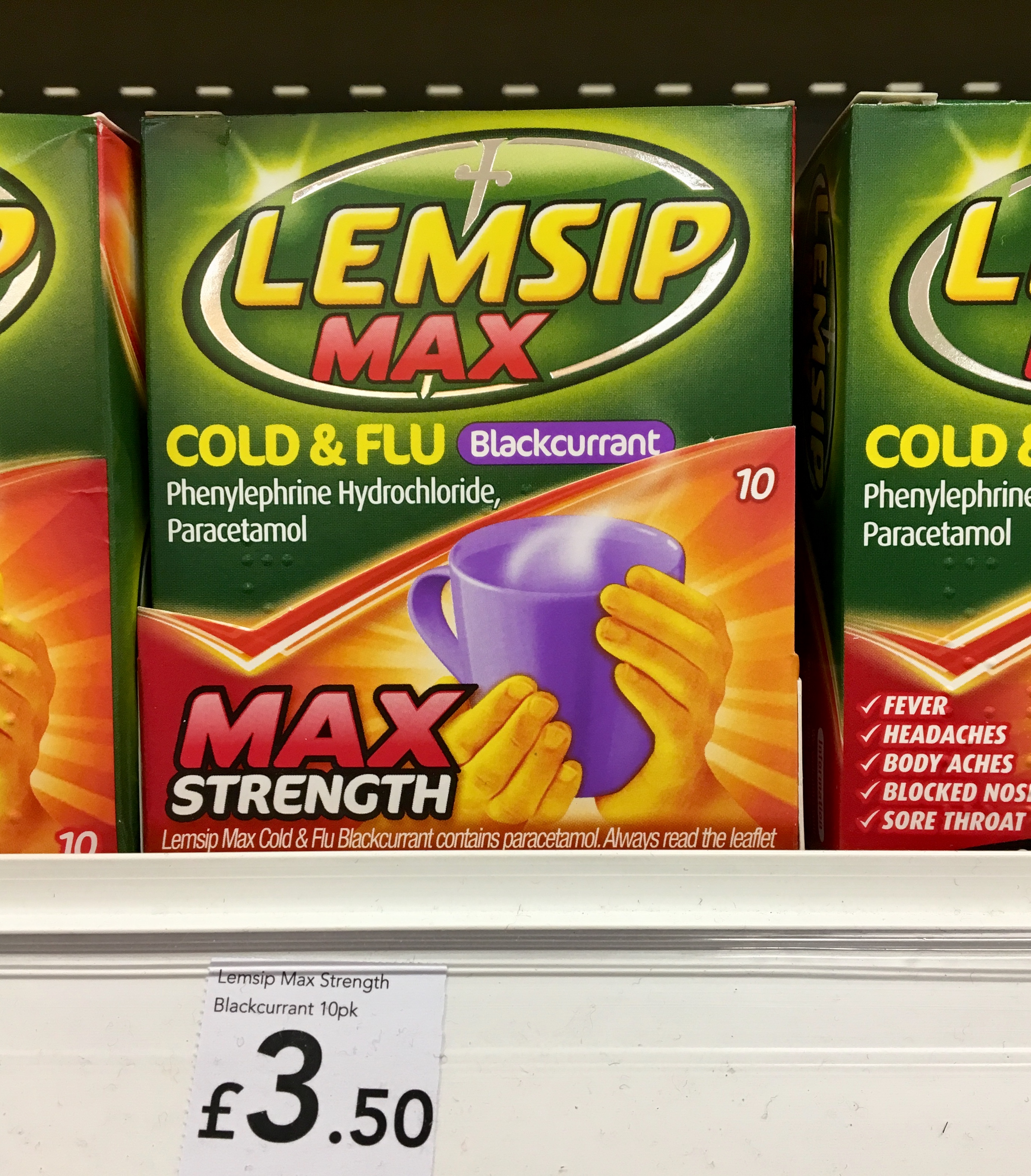 You see? Look how that cartoon hand cradles the mug – it feels better already! Now let’s have a look at the packet and see what’s actually in it – paracetamol and decongestant for £3.50.

Oh but wait a minute… 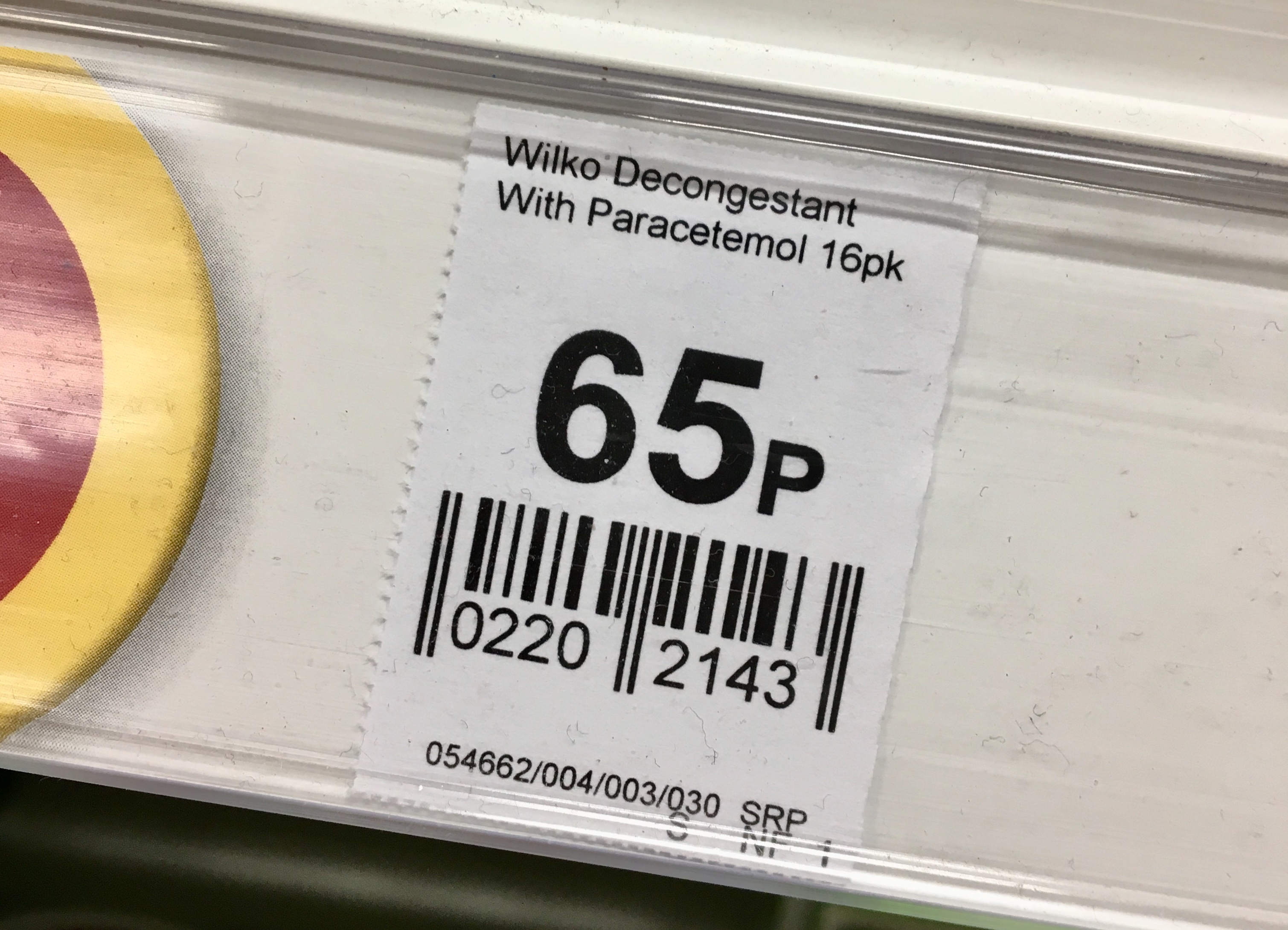 WHY?? Why would you buy something for £3.50 that you could buy for 65p just by reaching about 30cm to the right?? It doesn’t make sense.

If you’re feeling super bad you can take things to the next level, with a MAX ALL IN 1 – yep that’s right, ALL YOUR PROBLEMS SOLVED IN ONE SACHET. Plus it has a metallic box, so you know it means business. I mean sure, it’s exactly the same as the last one with some added guaifenesin, but a snap at £5.50! 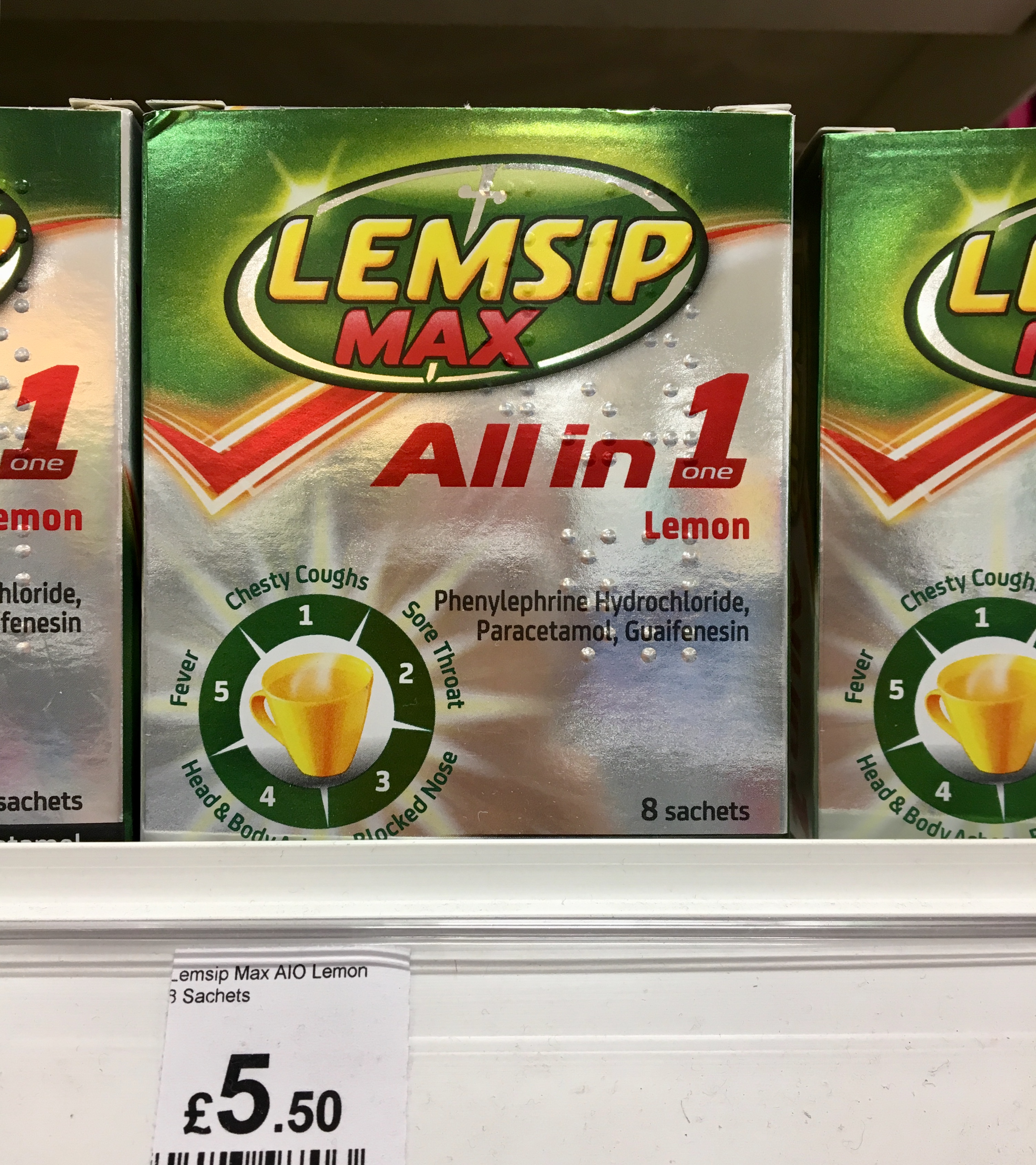 This is the unbranded version, which appears to be exactly the same apart from it’s only £1.85 and you get 25% more sachets.

But does it have a shiny metallic packet? No it does not, so there you go. 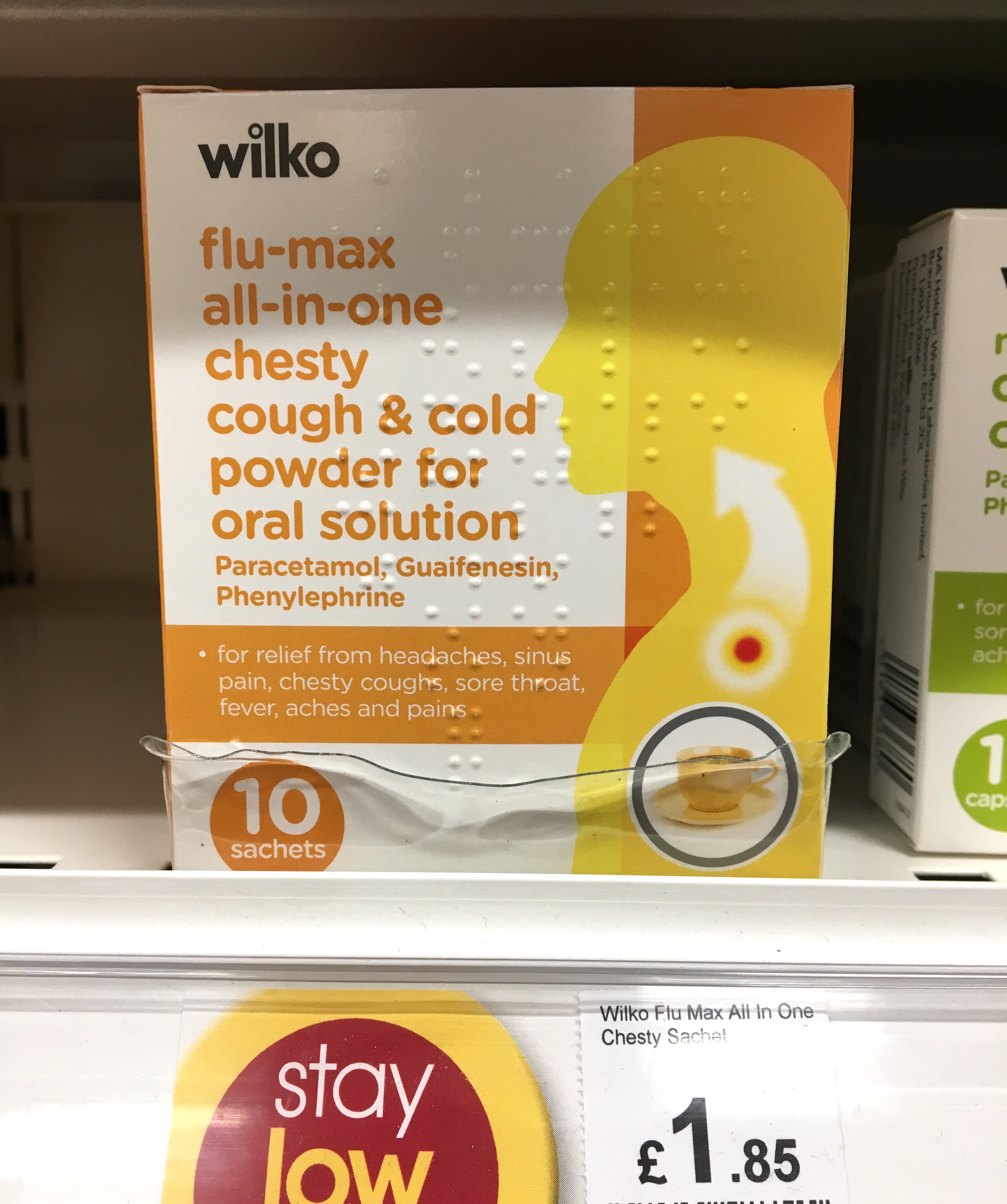 I get ESPECIALLY cross about products that appear to baffle us with jargon, or that want us think that we’re buying a product designed to target a specific condition. 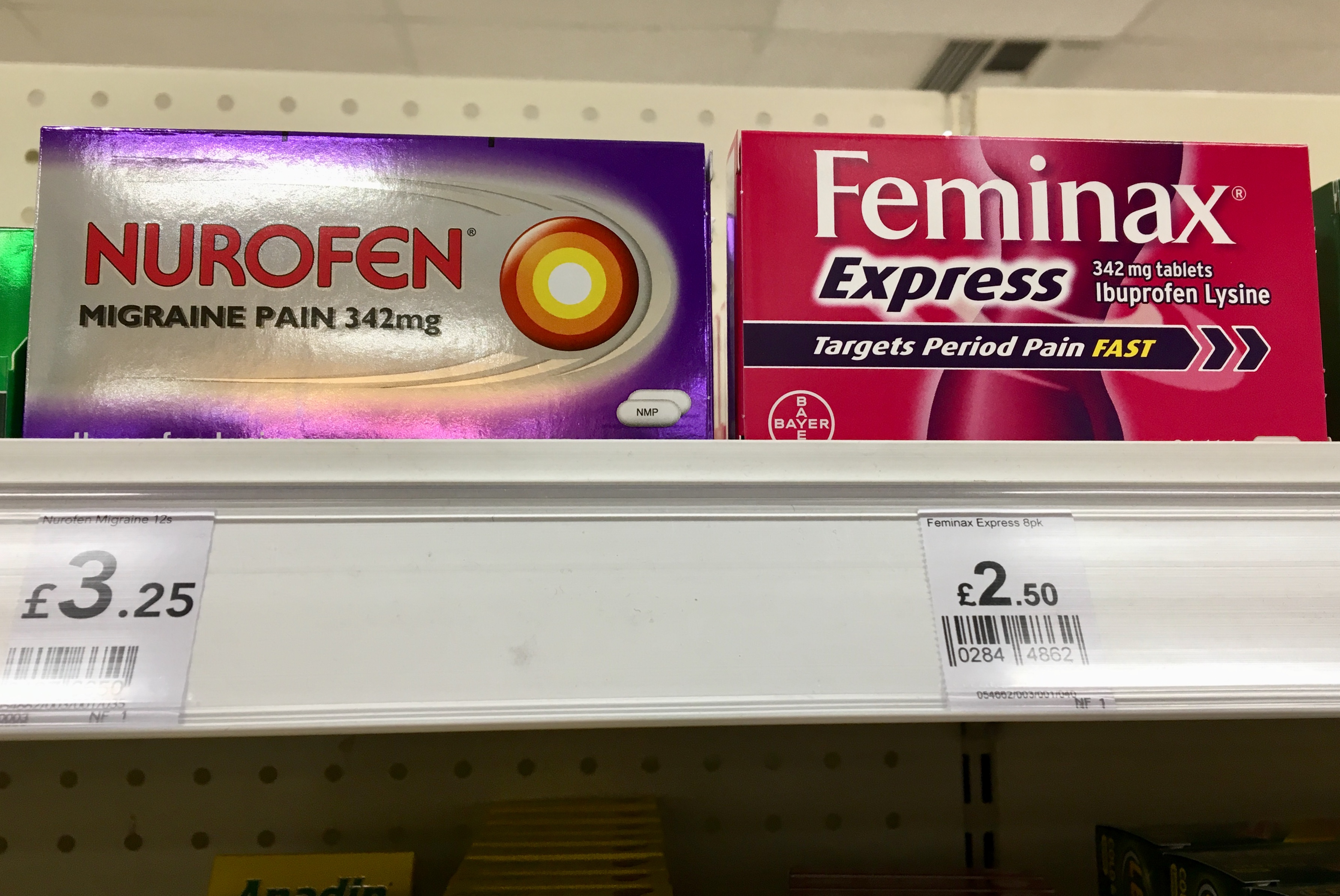 You’re got your period, you’re feeling vulnerable, you’re in pain – of COURSE you want the painkiller that says it targets period pain!

Except it doesn’t. Ibuprofen works by blocking enzymes everywhere in the body which help to make chemicals called prostaglandins. Less prostaglandin means less pain and inflammation. That’s it.

So ibuprofen works exactly the same way whether you have back ache, a head ache or period pain. There ISN’T an ibuprofen that thinks ‘ooh, period pain you say? Let’s not bother with that boring ‘absorption into the bloodstream’ stage, let’s get straight to that womb!’

Let’s take a closer look shall we? 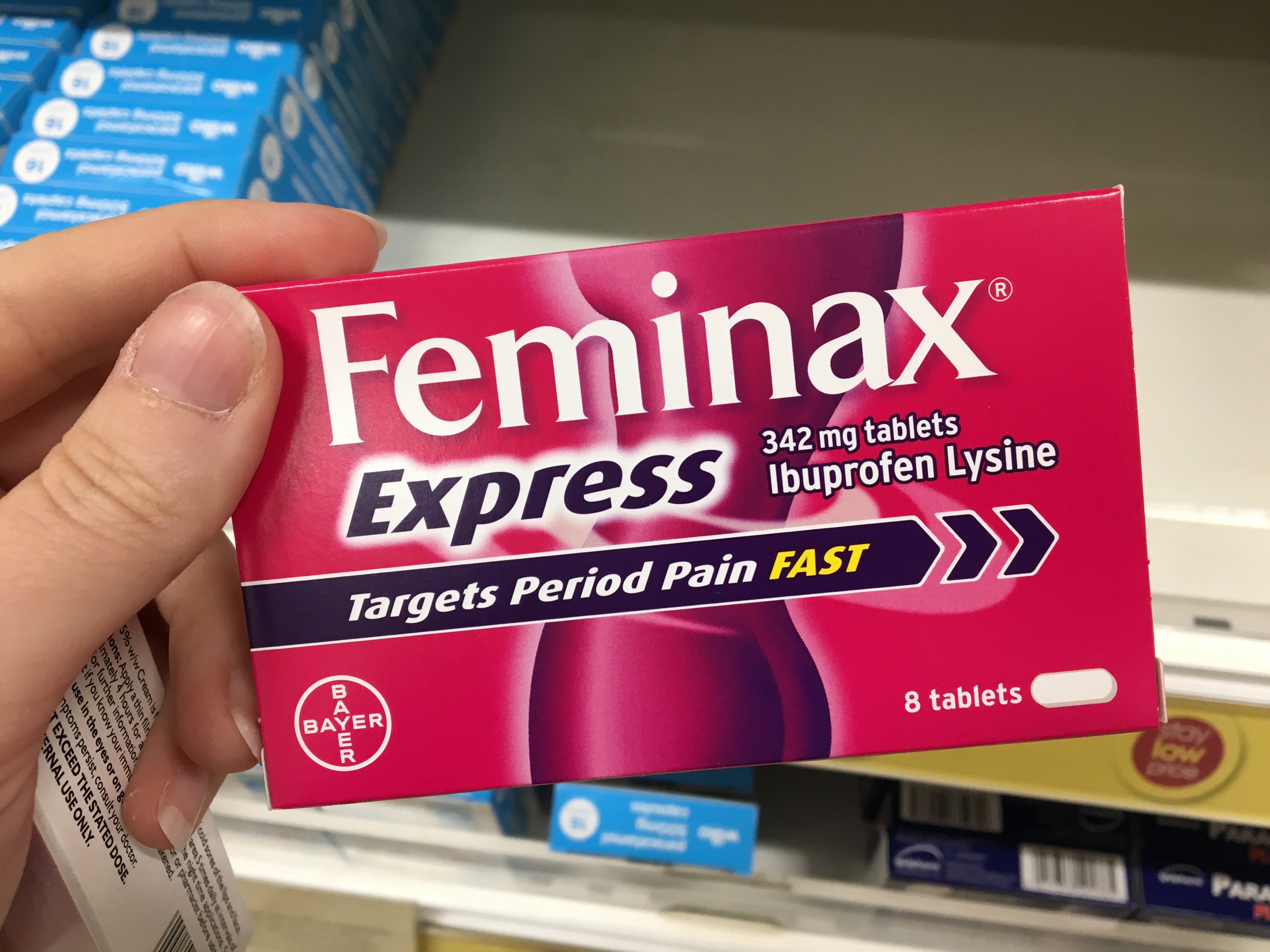 342mg of ibuprofen lysine you say? Well that sounds important doesn’t it? It’s not even a round number, which is all very clinical and impressive. It’s a bit like when you see a headline on Buzzfeed that reads ’27 things you must see in Bulgaria’ – you really BELIEVE that those are THE 27 things don’t you?

Normally ibuprofen comes in 200mg doses so this must be the good stuff right?

Let’s turn the packet over and see shall we? 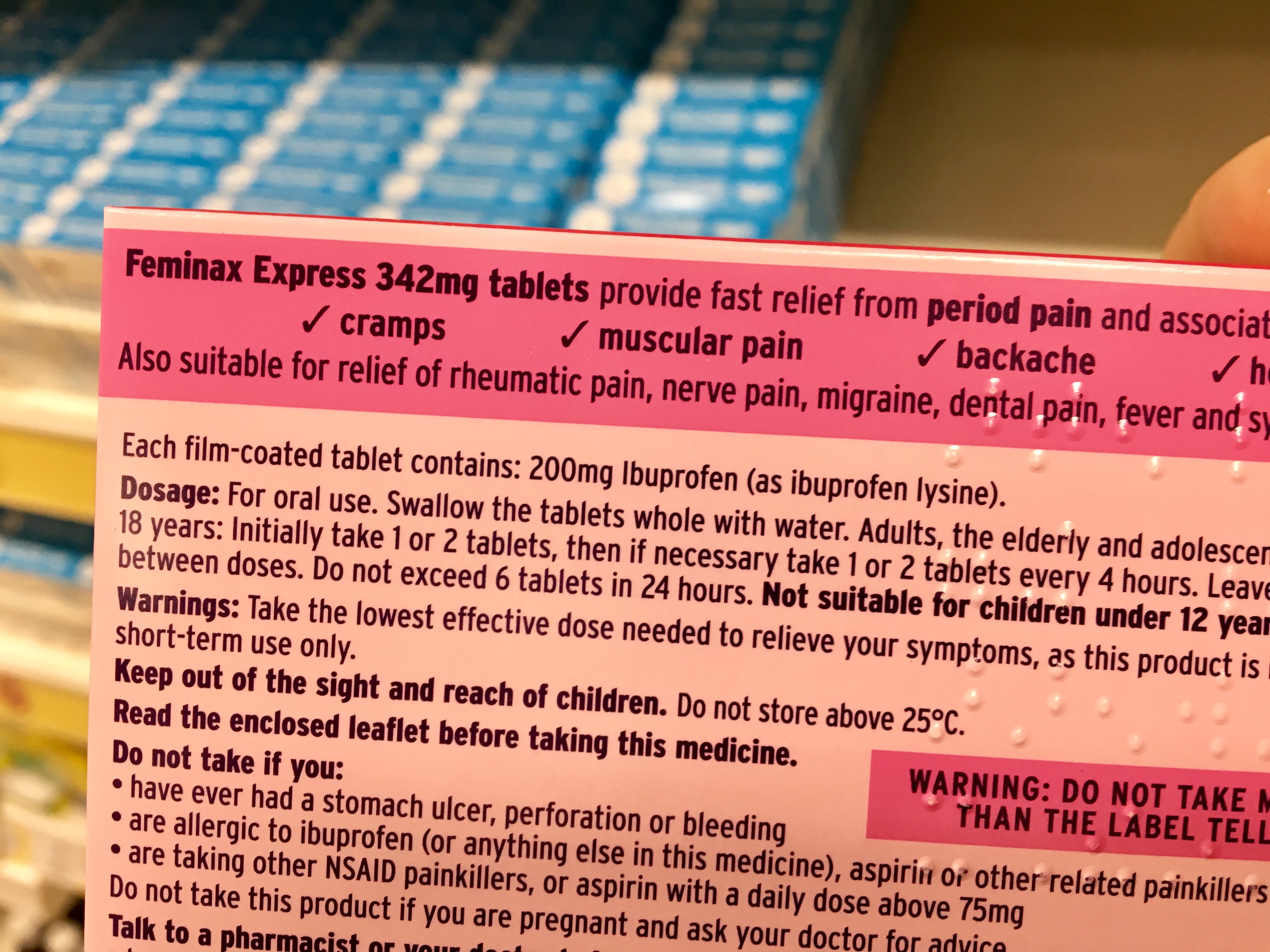 So hang on, it’s basically the same as this? 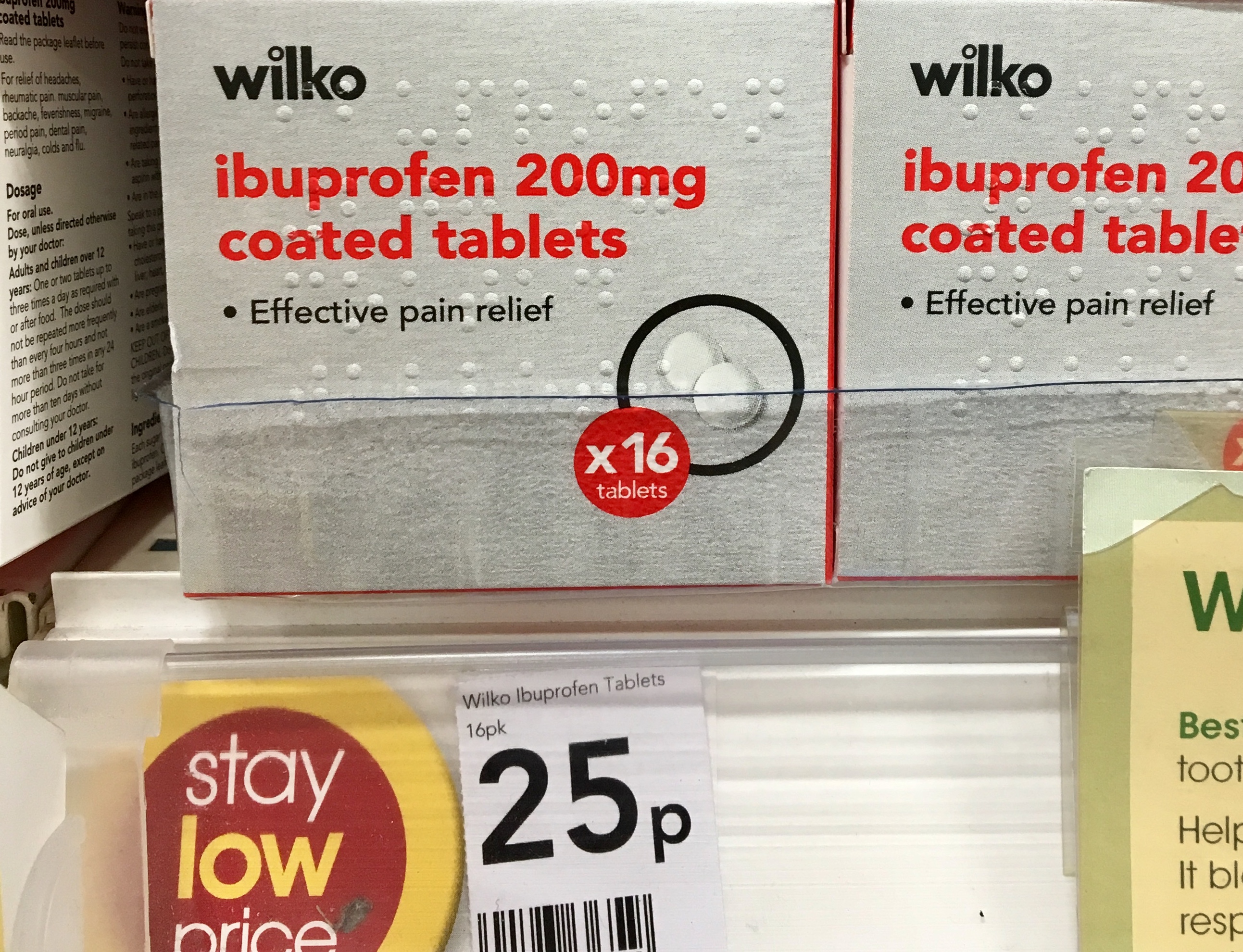 It’s NOT OKAY. It’s a trick. Misleading marketing to try to make you believe you’re getting something special when you’re not.

(I’ve done a bit of research and ibuprofen as ibuprofen lysine CAN absorb slightly more quickly than other forms, so it might reduce the pain a bit sooner, but it will ultimately do the same thing and definitely cannot TARGET anything any more than any other form of ibuprofen. Is that worth paying TWENTY TIMES MORE FOR??)

So that’s my rant for the day.

How do you feel about overpriced medications? Would you be mislead by ‘342mg of ibuprofen lysine’? Do you find yourself, riddled with cold, buying expensive Lemsip in the desperate hope that it will be more effective than just knocking back a couple of cheap paracetamol?