Growing up, my mum worried a fair bit about our health. It was hard to do anything vaguely physical without hearing a sharp intake of breath and my Mum muttering ‘you could break your neck!’

I think it probably got to the point where even if I HAD had a stiff neck I wouldn’t have said anything, just to avoid the fuss.

While no teenager particularly wants their parents fretting around them all the time, my Mum was right to take meningitis seriously – it’s a serious disease, and something that we should be educated about.

To help hammer the message home, here are five things you should definitely know about meningitis. Please share them with other people, especially young people, and please do share your own thoughts and experiences in the comments.

The more we talk about meningitis, hopefully the fewer people will have to experience it. Find out more about how to protect yourself here. 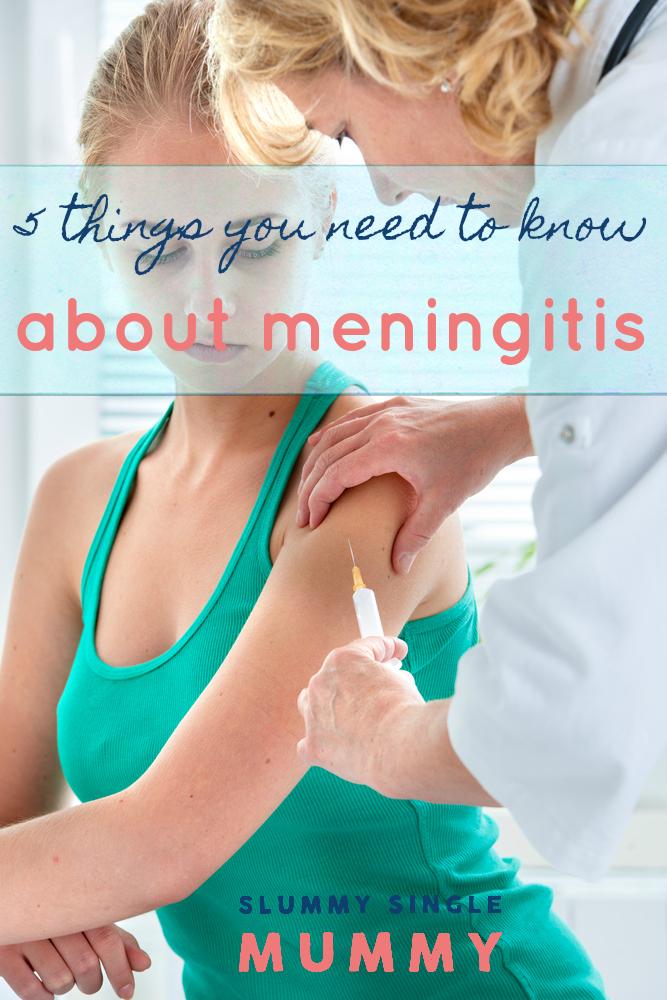 Meningitis is the swelling of the meninges, which is the lining around the brain and spinal cord. It is mainly caused by particular germs entering the body and it can be as little as 24 hours between the first symptoms and death. If you suspect that you or a loved one have meningitis then get medical help as quickly as possible.

2. Age can impact your risk of getting meningitis

Adolescents and young adults – roughly the 16-25 age group – are especially at risk from meningitis caused by meningococcal bacteria. These bacteria live harmlessly at the back of the nose and throat of people – around one in five adolescents and young adults are carriers. Common social behaviours adopted by this age group can promote spread of the bacteria so that’s why they seem to be at particular risk of this infectious disease.

Babies and toddlers are also at a higher risk because their immune systems are less developed.

3. You can potentially pass it on

The bacteria at least.

The bacteria that cause meningitis can spread from person to person through common social behaviours like going to crowded places, living in close quarters, kissing, drinking from the same glass and smoking. This is thought to be another reason why adolescents and young adults are more at risk.

Just because you catch meningitis early enough to treat it, doesn’t mean that’s the end of the story. Meningitis can have both temporary and permanent side effects, which can effect people both physically and emotionally. About 10-20% of people who survive meningitis can be left with physical disabilities such as amputation.

5. You CAN do something to help protect yourself against meningitis

Because there are a lot of different bacteria and viruses that can cause meningitis, there are several different vaccinations too. Most of these are part of the standard programme of vaccinations that children receive when they are babies, but there is also a vaccination that can be given to teenagers or to young people starting college or university.

This vaccine, called the MenACWY vaccine, is given as a single injection and helps protect against four different strains of the meningococcal bacteria that cause meningitis. These bacteria are one of the most common causes of meningitis in young people.

It’s at this point that I ask Belle whether or not she has had this vaccination. She reminds me that she missed out on it at school and that I was meant to follow it up with the GP.

Good job I was writing this post really isn’t it?

For more information about how to protect yourself or your child from meningitis visit the #24YouHaveThePower website.