That’s my fault, as I have been BUYING A HOUSE! My very own house, where I can put up wallpaper and have to be responsible for the boiler. Scary times.

In my mind I imagined that moving into my own house would mainly consist of me skipping happily from room to room, choosing exactly where I wanted to put my plants, but it turns out it’s a bit more complicated and dull than that so far, hence me being a bit quiet.

What better thing to do though when you are super busy than to casually cook three meals from scratch and create a video of it?? I know right? It’s the OBVIOUS thing to do, and I don’t know why more people don’t do it quite frankly, as it’s totally THE way to relax mid-move.

So before you do anything else, you MUST watch the video. I’ll tell you what it’s all about in a minute, but seriously, if you have ever moved house, take a minute to think of me and watch the whole thing as a sign of solidarity. It’s less than eight minutes, which in the grand scheme of things is nothing is it??

Okay, thank you. I will calm down now.

As you will have seen when you watched the video, which I KNOW you did, this post is part of a project with Fanta, celebrating the relaunch of Fanta Orange. Fanta has a sexy new spiral bottle shape – an industry first apparently – a new logo, and a new recipe, which means it now has a third less sugar, hence me being challenged to create family recipes with fewer calories.

I have to say too that it actually tastes really good. I like it. 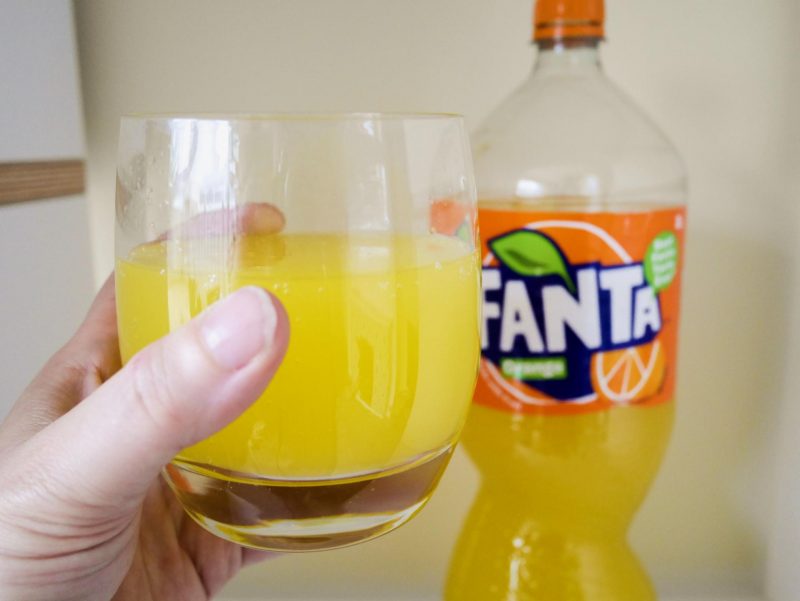 The vibe behind this challenge is not to make things super complicated, but just to make a few simple changes to recipes that you cook all the time that reduce the total calories, either by cutting back on the amount of sugar or the amount of fat. The end result tastes just as good, it’s just a lower calorie version. This isn’t about dieting either – it’s not about losing weight – it’s just about being a bit more conscious of what you eat and making healthier choices.

What surprised me when I started looking at what we eat was how much fat and sugar slips into our diet with us noticing. It’s quite scary really when you start toting up the calories in things – a casual handful of cheese on your spaghetti Bolognese here, and extra sausage there – it all adds up.

The good news though is that this works the other way around – it’s just as simple to reduce calories by making a few easy changes. I’m not going to insult your intelligence by giving you a full recipe for things like mashed potato, but I will give you a run down of how I adapted our family favourites:

I feel like if you don’t know how to make a decent spag bol, then there is probably something wrong with you, so this seemed like an easy choice for a favourite family meal.

To make a low calorie version of spaghetti Bolognese is very straightforward. Start by switching to a one cal spray instead of oil to fry off your onions. Add in extra vegetables like peppers, mushrooms or courgettes. Switch beef mince for a meat free alternative and you’ll reduce the fat without compromising on flavour. Meat free mince is actually very tasty and we’ll often have it in a spag bol instead of beef, even though we aren’t vegetarian.

Finally, avoid that mountain of cheese piled on top! If you can’t live without it, use a really strong flavoured cheese and you’ll find you need much less of it to get the same taste. 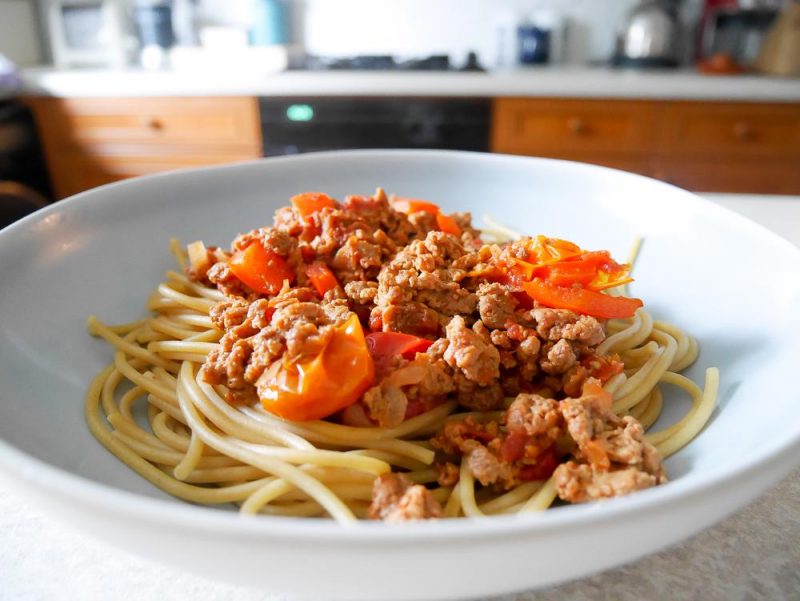 I remember eating sausage, mash and beans a lot when I used to go to friends’ houses for tea. I can clearly remember one day spreading my mash out, sticking cut up sausages in it, and spooning the beans on top.

‘This is what I ALWAYS do with mine,’ I said, clearly making it up as I went along. It must be a kid thing, to try to make out that you have a super cool way of doing something that you’ve been doing for YEARS.

I made three changes to my sausage, mash and beans to reduce the fat, sugar and calories:

Because who doesn’t love a crumble?? 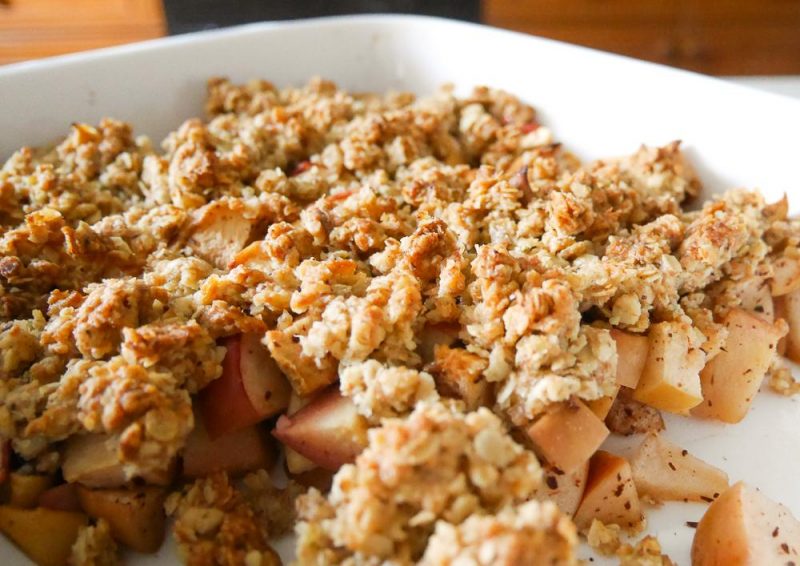 This one is probably the most different to the original, but I promise it’s still delicious. The added bonus is that it feels super healthy, so you don’t feel as guilty when you take a portion in a tub to work for breakfast. (Which I did today.)

The filling is just made by chopping up eight Royal Gala apples in little pieces. Any sweet apple will do, you just use eating apples instead of cooking apples so that you don’t need to add extra sugar. Cut them up fine so that they cook more easily. (You know all this from the video though right??) Mix in a small sprinkle of nutmeg and a teaspoon of cinnamon.

(I had a bit of a moment at this point where I realised I had run out of cinnamon, dropped an entire jar of turmeric over EVERYTHING and swore loudly. I then found a cinnamon stick at the back of the cupboard and ground it up with my Nutribullet and that seemed to work fine, so crisis over.)

To make the topping, add about 50 grams of spelt flour or similar to 100g of oats and a teaspoon of cinnamon, and mix in a tablespoon of melted butter and two of maple syrup. Spoon this over your apples and bake for up to an hour or until the apples are softish.

Your kitchen should now smell AMAZING.

Are there any favourite family recipes that you could adapt to reduce the sugar or fat? Once you start thinking, you’ll be surprised at how easy it is! 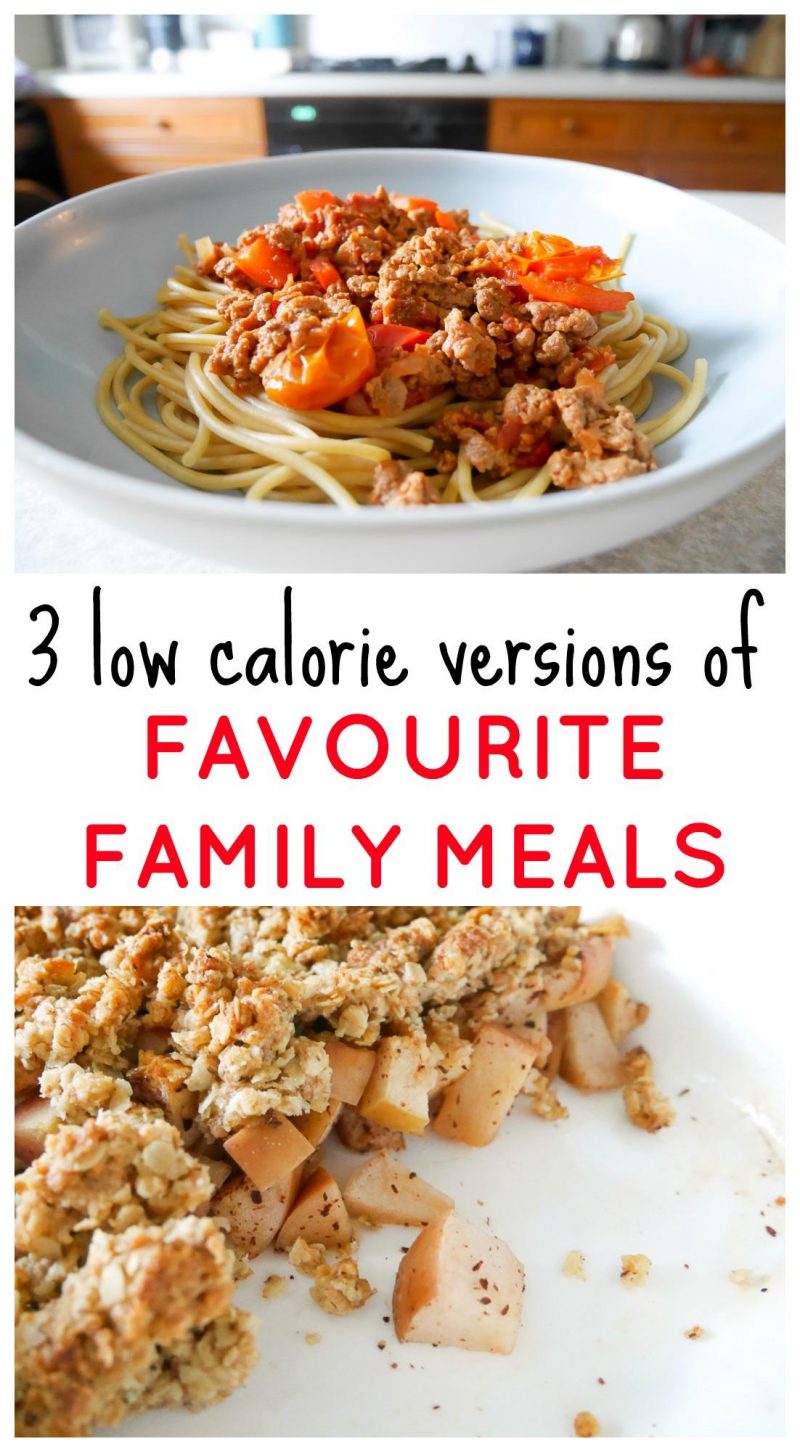