I’m a sucker for a self-help book.

I have a big stack of them at home and generally I find the messages really positive, if not exactly life-changing. I dip into them every so often as a reminder to do the basic stuff like think positive thoughts and let go of negative emotions. It’s a bit like having a session with a life coach, only cheaper. A lot of it is the same – love yourself, forgive others, embrace fear, books to make you happier – nothing revolutionary, but nothing controversial either.

That’s what I thought at least, until I got to a particular paragraph in my latest read, a Christmas present that I put on my Amazon wish list because I do quite want to be a badass and live an awesome life. 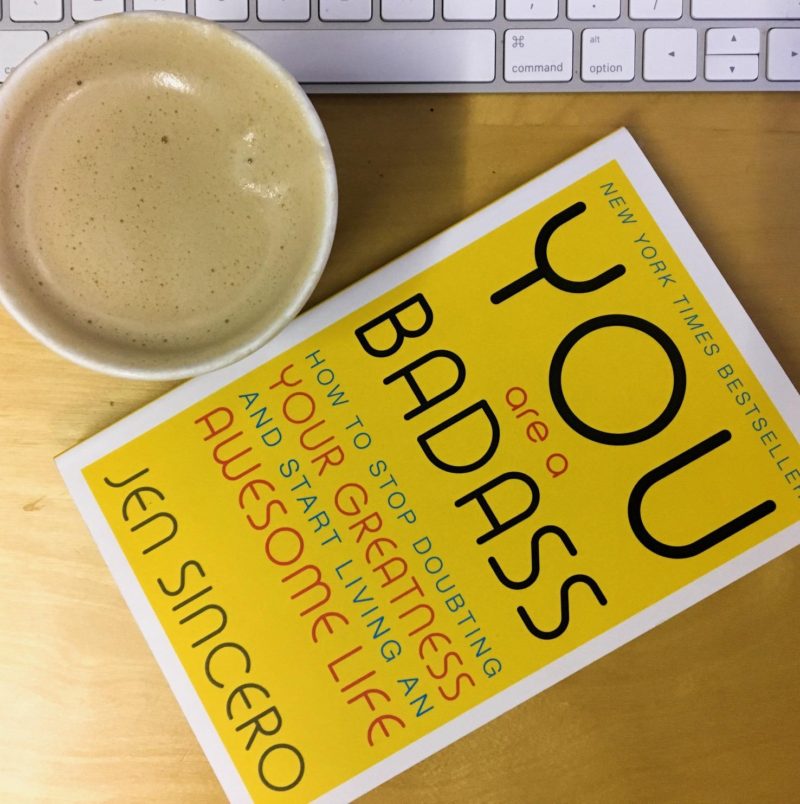 I was over half way through the book and I’d not come across anything I disagreed with, apart from the God references, but I just ignore those. I may not be a God fan but each to their own. There was one particular paragraph though that I couldn’t ignore.

It was a paragraph in a section about the stories we tell ourselves and how they hold us back. Some examples included seeing yourself as the sort of person who always fails at relationships, or who is bad with money. There aren’t really no decent men out there, but we kind of fool ourselves into believing it so we don’t have to blame ourselves when it goes wrong.

Sure, I get that.

‘We pretty much don’t ever do anything that we don’t benefit from in some way…’ says Jen Sincero. ‘If you’re perpetuating something dismal in your life because of some dopey story, there’s definitely something about it that you’re getting off on.

‘Let’s say, for example, that your story is that you’re depressed. Chances are pretty good that even though it feels awful, when you feel awful you don’t have to work hard or do the laundry or go to the gym. It feels very familiar and cosy and comfortable. It gets you attention. People come in and check on you and sometimes bring you food. It allows you to not try too hard…’

Depression is not a spa Jen Sincero.

Depression is not something you look forward to as an excuse not to have to do your own washing. If only you could concentrate long enough to work, then perhaps you wouldn’t also have the crippling guilt and anxiety that grows and grows the further you get behind with things. Any research paper on depression will show you that.

Yes of course there is an element of personal responsibility around depression, and there are a lot of things that you can do to try to make yourself feel better, but it’s definitely not as simple as that. For example, whereas some people find that taking medication or undergoing therapy can make depression more manageable, others prefer to use natural products such as 8vape cartridges or other similar vaping products alongside alternative herbal remedies. Ultimately, deciding which route to take can be overwhelming.

As someone who has experienced depression, albeit in what I feel is a relatively mild form, (I cry a lot and feel terrified, but deep down I know it’s going to get better and that I’m a decent person), I can confirm that at no point does it feel ‘familiar and cosy and comfortable’.

Depression and anxiety are the most uncomfortable things I have ever experienced. You don’t feel right. Everything you thought you knew feels unfamiliar, pointless and flat. You can’t get physically or emotionally comfortable, no matter what you do. Depression is not some kind of favourite, comfy blanket that comes with the added benefit of free meals.

I’m wondering if the author would have dared to write a paragraph like this:

‘Let’s say, for example, that your story is that you have MS. Chances are pretty good that even though it feels awful, you kind of like that sometimes you get to sit in a wheelchair and not have to bother to walk around. You’re in pain, but that gets you off the gym. Your vision is poor, but that means you can away with not reading or working hard. It gets you attention. People come in and check on you and sometimes bring you food.’

No way would Jen Sincero have dared to say that about a physical health problem, and yet a mental health problem? Well that’s clearly just an excuse for laziness. Feeling depressed? Nah, that’s just attention seeking.

What is wrong with people?! She’s spent half a bloody book telling people to love themselves and then she casually swoops in with that. ‘Sure, you’re awesome, but cheer up yeah? Stop slobbing about.’

It made me so cross that I couldn’t read any more of the book, so it looks like I’m not going to be a badass after all. If being a badass means being ignorant and narrow minded though, I think I’d rather not anyway thanks.

What do you think? Am I being unreasonable to be so annoyed by this?