Last week Belle and I had a valuable lesson in ‘the importance of trying new things’, or, more specifically, the art of axe and knife throwing.

You may remember how I teased you a couple of weeks ago with a post about taking on a challenge with the National Trust, where I asked you to vote for what you’d like me to do. Axe throwing won the vote and I was secretly very pleased as it’s something I’ve never done before, and hopefully, unless I find myself alone in the woods with just an axe and a ferocious bear, not something I will ever do again. 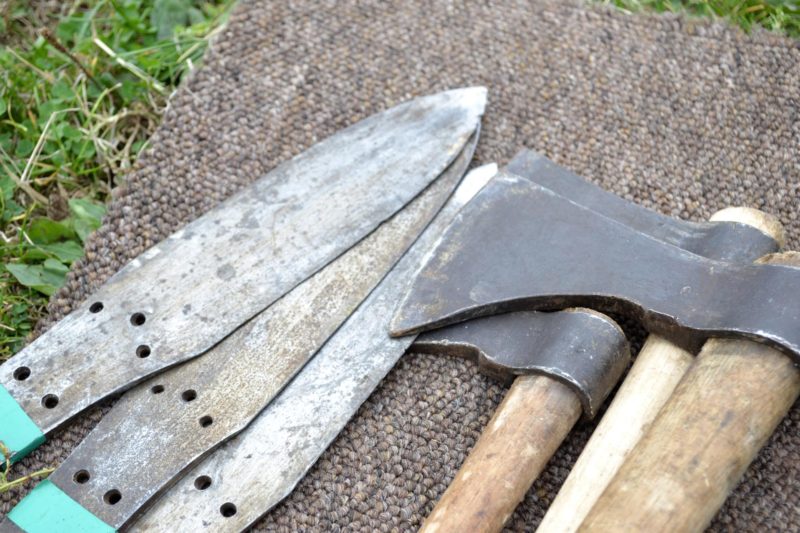 We were taught the art of axe throwing by a company called Channel Adventure, who are based not far from us, on the edge of Exmoor National Park. They run all sorts of adventurous looking courses and activities, and are heavily involved in the National Trust’s new festival, the South West Outdoor Festival. Channel Adventure are going to be offering various activities over the festival weekend, including rock climbing, rafting, kayaking and, you guessed it, axe throwing. If our little adventure tickles your fancy, do have a look at the South West Outdoor Festival, and you could have a go for yourself.

We rocked up at the venue at 10am on a Friday morning. Belle had made cupcakes, which immediately went down well with the two woman who were our teachers for the morning. (Didn’t I bring her up nice?) We were joined a few minutes later by a group of three teenage boys who looked like they were too cool to be anywhere other than Snapchat, and who kept their hoods up permanently to make the point. Apparently they were from Birmingham, staying with the aunt of one of them for a couple of weeks.

“They don’t want to be here,” said the aunt as she dropped them off, “but I’ve booked them in and they’re doing it.”

I felt for her.

I felt for the boys a bit too when they realised they were going to have to try to look cool/be good at knife throwing in front of Belle, who had obviously made sure her eyeliner was on fleek for the day. 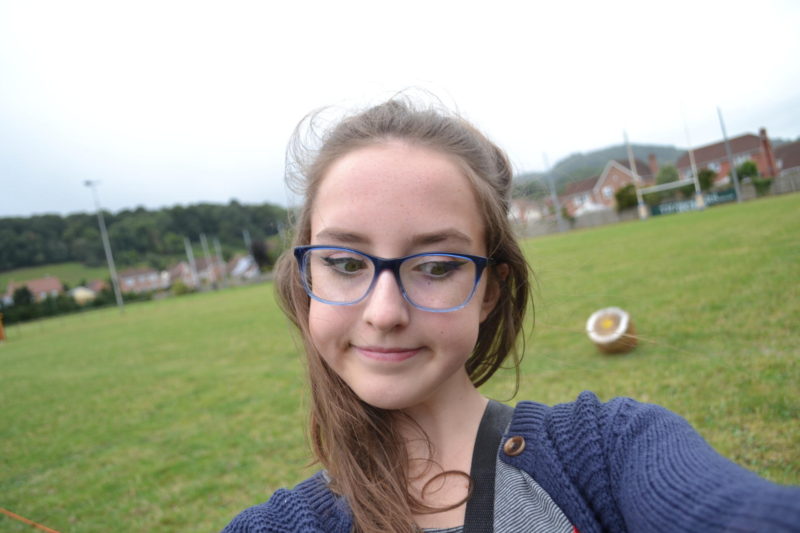 We started the session with a bit of archery, which was really good fun. Belle and I actually did an archery course a few years ago when we lived in Bristol, (because we are super cool), but we played this down, and tried to act surprised/delighted/modest when we thrashed the boys in the girls v boys archery tournament. Seriously, we nailed it. 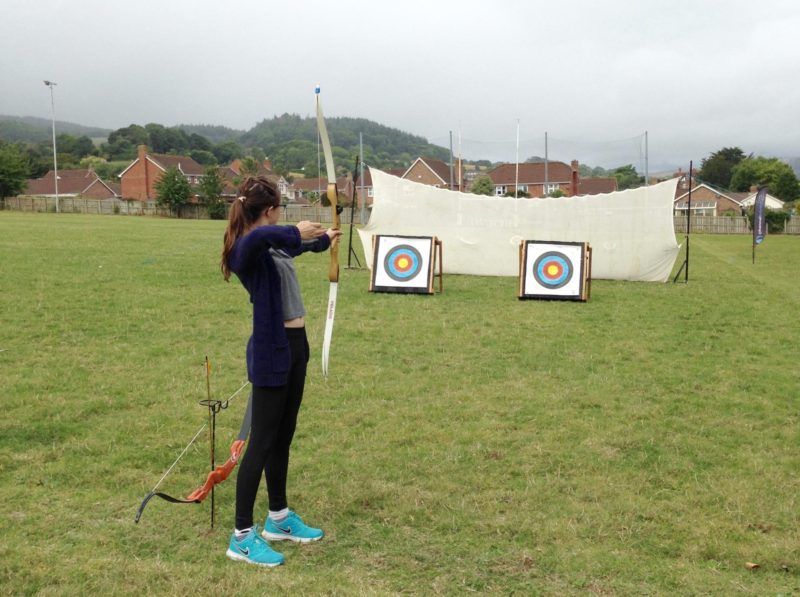 The boys did their best to maintain an air of nonchalance but as they quickly discovered, it’s actually quite difficult to fire a bow and arrow with your hood up and one hand in your pants. As the morning went on you could see that they were enjoying themselves, even though they were trying not to, and the competitiveness started to ramp up, especially when Belle scored two golds in her final round.

I’ve always found something weirdly relaxing about archery. There’s a rhythm to it that absorbs you – get in position, load the arrow, pull back, aim, fire – it flows, and you don’t think about anything else. There’s something really primitive too about being outdoors, with a simple weapon, that makes you feels somehow more connected with your body and your surroundings. It’s not like sitting watching a video on your phone – it’s just you and the bow and arrow. You’re involved. I like it. 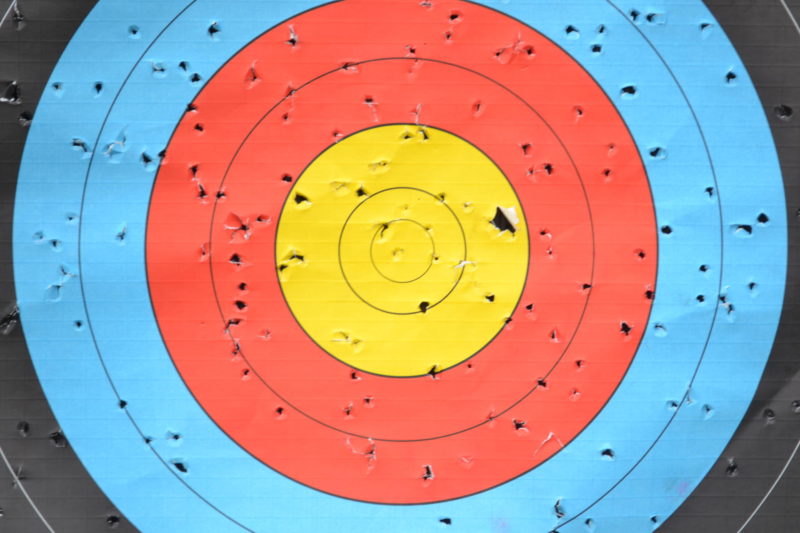 Once we had proved our archery skills, we moved on to the knife and axe throwing. Here it seems, we are not so talented.

If you’ve never done it before, I’ll tell you straight up – throwing an axe is HARD. Whereas with a bow and arrow it felt like I had some kind of control over what I was doing, throwing an axe seemed to be mainly luck. I’m sure it’s not really, but I found it difficult to get my head around how you were meant to connect the axe in your hand to the wooden target. I guess that’s the point of trying new things isn’t it? You’re allowed to be rubbish at them to start with, and the pleasure comes from slowly mastering the skill.

The boys seemed to get to grips with the knife and axe throwing more quickly than us, although I did have a proud moment where I managed to get the axe to sort of flip over the target and embed itself in the back of the stump. I tried to make out it was deliberate, but I wasn’t fooling anyone. 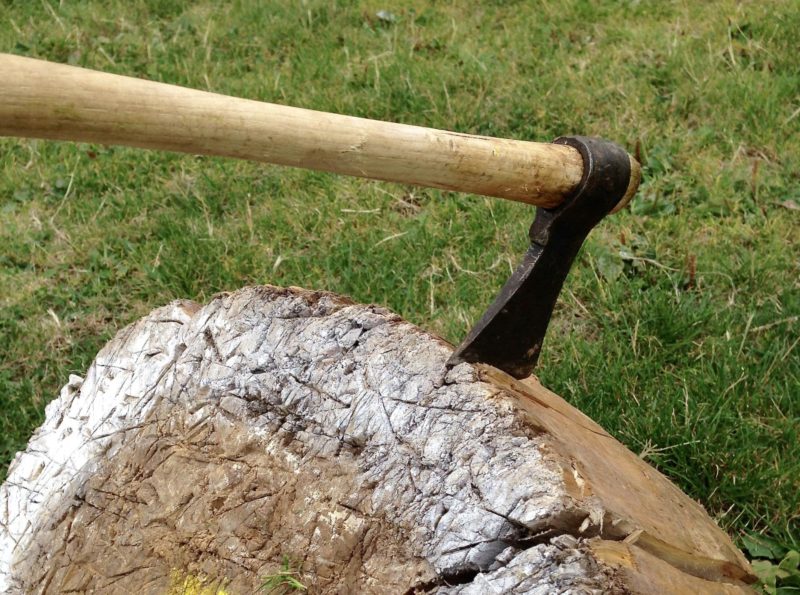 While axe throwing was definitely more difficult than archery, there was the same feeling of being in touch with your own body, and a very satisfying ‘thwack’ whenever an axe or a knife did manage to hit the target. For a split second I felt that if the world should happen to be struck down by some sort of apocalypse, that I would be okay, and that my axe throwing skills would see us right.

And then I’d throw another one and it would bounce off the log and land six metres away and I’d know we were doomed. 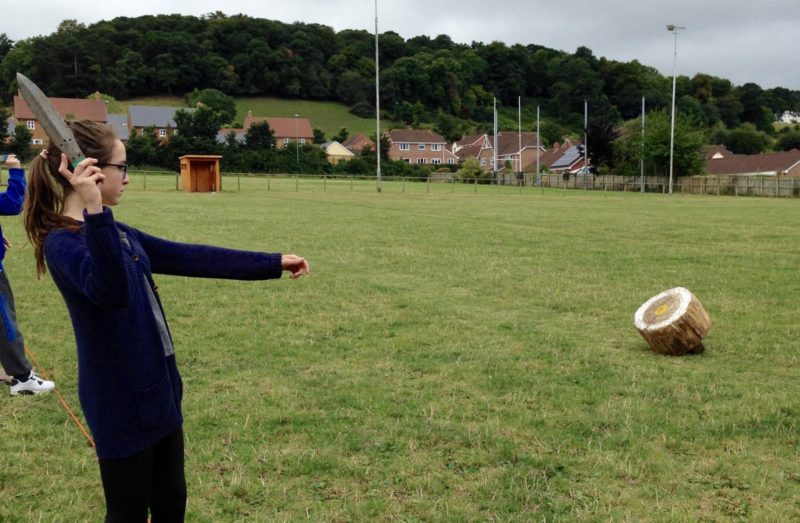 I don’t often get that feeling of losing track of time, and it’s a clear sign that I enjoyed myself. I could tell that Belle had a good time too. She’s sometimes a bit hesitant about trying new things, because of that classic fear of failure, and if she doesn’t pick something up quickly, she can sometimes get frustrated. The axe throwing was such fun though, with absolutely no pressure to do anything other than have a good time, that she was very relaxed throughout, and genuinely pleased with herself when she did something well. That pride is always a lovely thing to see as a parent.

If you fancy having a go at axe throwing, cycling, wild swimming, or all manner of other cool, outdoorsy activities, then do have a look at the National Trust’s South West Outdoor Festival. It’s happening from Friday 23 – Sunday 25 September 2016 at Heddon Valley on Exmoor, and there’s loads of exciting stuff going on. You don’t have to be super active to get involved – I’m definitely not some crazy fit triathlon runner, but even I can manage chucking an axe or a bit of gentle rock pooling.

Thank you so much to the National Trust for arranging our axe throwing adventure for us – it was bang on target! 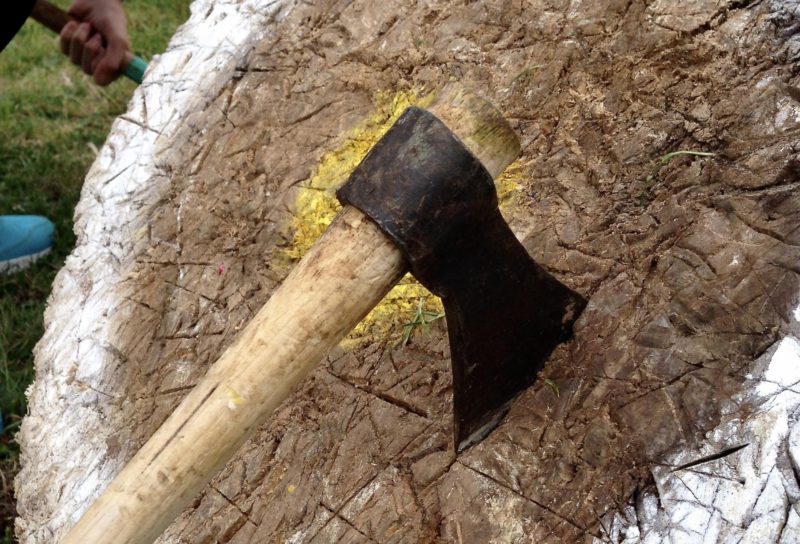