The idea behind the challenge, which was set for me by NoteMachine, was to see how spending habits have changed, and to what extent we now use card rather than cash, or vice versa. I must say that I’ve never really given much thought to how I spend money, unless I really want a sausage and onion bap from the little sandwich bar around the corner, who only take cash, and so I was interested to see how I got on.

Here’s a diary of my challenge…

My challenge is to spend three days using only cash and three using only card, but it’s the first day and I’m still not sure which to do first. As I do with most of my serious life choices, I ask Twitter. Consensus seems to be that I should start with cash, as this will be the hardest, and I’m very pleased with this idea indeed, as it’s a Thursday – farmers’ market day in Taunton. The farmers’ market is about a two minute walk from my office, and I do quite like to treat myself to a teeny tiny Japanese chicken curry on a Thursday, and possibly a chocolate brownie. (If they are home made they are wholesome, and therefore terribly good for you.)

I have a momentary panic when I realise I had gone to work without card or cash, but Bee comes to meet me for lunch and saves the day:

Slight hitch in my card vs cash plan – I have left my card AND cash in my other jeans and have found £2 and a euro on my desk. #caseforcash

So far so good, although there are a couple of things I notice just after one day of cash only; firstly, I took a lot of cash out, because I was afraid of not having it when I needed it. I don’t always carry a bag, and have a tendency to stuff money, old tissues and scraps of paper into my pockets, and then forget about them. I feel immediately like the potential for me to end up out of pocket is greater with cash, as it seems quite lucky that money might literally fall out of my pockets.

I also notice that I don’t enjoy the shopping process as much. This is a psychological thing, but there’s something about physically handing over your hard earned cash that makes the whole process a bit less fun. I guess this is why people suggest that only ever using cash is a good way to spend less money, as it’s harder to part with it.

Friday. Today, again, is not too bad, although it’s raining heavily, and this highlights another flaw in my ‘randomly keep cash in pockets’ plan:

Day 2 of 3 using cash only, so I have a coat full of soggy notes. That’s one downside – money gets wet in the rain! #caseforcash

I did need to buy a train ticket online for later the next week, but I just decide to put it off until one of my card days, as I’m definitely not going to go all the way to the station to buy tickets in person with cash. Online shopping would be a massive problem if I had to only ever use cash, as I do a lot of transactions online. I imagine if you were being super strict about the challenge that you would have to go without bank transfers and direct debit payments too? I certainly wouldn’t fancy rocking up to the post office every month with piles of cash and payment slips for all of my bills – that would be a complete faff.

The final day of cash only, and things aren’t quite go according to plan. We have driven up the night before to Stratford-Upon-Avon, as fiancé is working there and we thought it would be nice to keep him company and be around for the Shakespeare 400 celebrations. (And take some pretty pictures for Instagram.)

It doesn’t really get much more typically British than this does it?

The evening before had been fine as fiancé had bought dinner, (definitely okay for someone else to buy me things with a card yes?), and I stay on top of things during the day, because we’re always near a cashpoint. We even have a great moment with a car park machine that only takes cash; a fact I realised only when we come to pay for the ticket, and which would have left us in a pickle if it had been a card day.

But then on the way home, on the M5 at about 7pm, I suddenly realise we need petrol and I have about £5.67 in cash.

We stop at the services, and do they have a cashpoint, but it’s one of those sneaky ones that charges you £1.95, chortling inside the whole time, for the privilege of taking out your own cash, because it knows you don’t have any other options. I’m sorry challenge, but I just can’t do it. I can’t bring myself to pay to spend my own cash, so I cave in and fill up the car with my debit card. (Well, with petrol obviously, but I pay by card.) I know this means I lose, and that’s hard for me, but I just can’t.

Card day! Hoorah! First things first, I buy my train ticket. We do so much of our spending online now, and it’s just so simple, it’s hard to imagine now what it was like doing things like this without the internet. In fact, what was it like? Did you just have to go and buy tickets on the day or in advance at the station? Or perhaps pay by card over the phone? When did card payments even become a thing??

Okay, I just looked it up… debit cards weren’t introduced in this country until 1987?! That’s crazy. 1987 is barely any time ago at all! The first cash machine was in 1967, but “early dispensers were designed to receive hole-punched vouchers of £10.00 each purchased by the customer from the bank and used in the dispenser when needed.” What does that even mean?! The mind boggles.

Anyway, yes, that just goes to show how quickly and significantly personal finances have changed, and how easy we have it nowadays. No hole-punched vouchers for me – it’s just a couple of clicks, my card details are already stored, and boom, train tickets purchased. That said, I bet the ticketing system was simpler in 1987. I never have any idea what sort of ticket I’m meant to get.

Small dilemma over putting a pound it to get a supermarket trolley, but Twitter reassures me that it’s just a token, and I’m not actually spending it, so it doesn’t really count.

Dilemma – does a pound coin in a supermarket trolley count as spending cash, even though you get it back?? #caseforcash

Monday, and another card day. This one though, I decide as I’m getting dressed, is going to be easy, as it’s my birthday, and I don’t plan on spending any of my own money at all, card or cash! Instead I plan to concentrate on taking pictures of pretty doors for my collection:

I’m slightly put off my stroke when I receive a birthday card in the post that I think might have cash in it, but it turns out to be a cheque. Problem solved. I pay in the cheque and spend it all on celebratory birthday plant pots in Homesense for my spider babies. No cash required.

It’s the last day of the challenge and after birthday fun times on day five, day six, which is a Tuesday, has a distinctly Mondayish feel to it. I’m at work early – before 8am – after dropping fiancé off at the station, but it’s hard to get motivated when I’m just wishing I was out for a little drive, on my way to have some brunch, with new plant pots in the back of the car.

What I really need is a hot sausage and onion bap to jolly me along, but the independent sandwich shop around the corner from my office is very much a cash only affair. If I didn’t use cash generally, the independent retailers would definitely lose out, as quite a few of the smaller shops in Taunton don’t take card payments. It would also be really restrictive for shopping at things like local craft fairs or events, which I do like to do, especially at Christmas.

I come across another issue with card only payments this afternoon, when I walk past a man selling the Big Issue. Normally I would buy one, and I’m a sucker generally for a charity collection, but I suspect that the Big Issue man doesn’t have a card machine in his back pack, so I have to walk on by. It doesn’t feel very nice.

And there we go. The end of day six.

How do you think you’d get on with a card versus cash challenge? 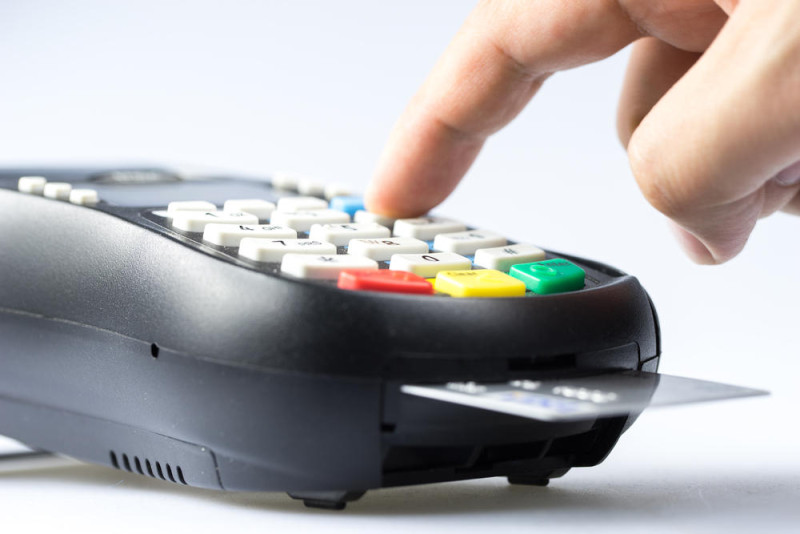