I think it would be fair to say I’m not a natural in photographs. Video I can do, still shots, not so much. You know that episode of Friends, where Monica tries to get Chandler to pose for an engagement photo? I’m like that. Something happens to my face. Also, I really know nothing about clothes, so when George at Asda asked me to style some looks for their jeans range, what I should have said is ‘honestly Asda, you don’t want me in your clothes, it won’t be pretty.’

What I actually said was: ‘Sure! That sounds fun!’

Now the idea behind the challenge is that George wanted to show me that they have a range of jeans for any occasion. Jeans are a wardrobe staple after all, and can always be styled up or down, depending on what you’re doing and where you’re going. They’ve put together this little video, illustrating the point.

Which jean are you?

Needless to say, I do not look like this woman, so, in anticipation of the photos that you’re about to see, I’m going to spend a little bit of time first telling you about the jeans in words, as they are actually really nice, and I want that to come across.

The Wondersculpt high waisted skinny jeans are fantastic. Seriously, I’ve been pretty much living in them since they arrived. I’ve had a couple of people ask me if I have lost weight, which is lovely, if not a little suspicious, and they are one of the comfiest pairs of jeans I’ve had in a long time. They hold everything in, without feeling tight, as they are super stretchy. The fit is perfect, and I speak as someone who does struggle with jeans, particularly with the whole massive bum/relatively smaller waist ratio. I love the high waist, because it keeps all the wibbly bits tucked in, but there’s none of that ‘I really need to change into my pyjama bottoms now’ feeling after dinner, because they are so damn stretchy. Genius.

In these jeans I feel sexy and smart, but comfortable. I feel like I’m me, but with a bit of a sassy edge, like I’m not too old to wear skinny jeans, honestly.

You want to see some photos now don’t you? Hmmm… Okay….

So, this first one I took myself on a timer, before everyone arrived at a social media workshop I was doing this week at The Forge in Bristol. I went with a double stripe thing because I was running a social media course, and I thought it said ‘look at me, I am so cool and up to date with social trends that I can pull off double stripes.’

What do you reckon? Obviously ignore my face. I could only take one because then people started to arrive… 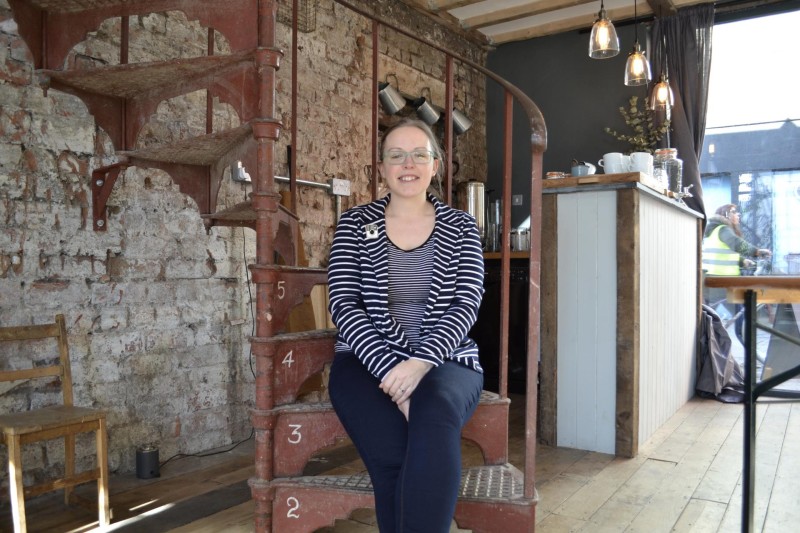 Here’s another one from The Forge – isn’t it gorgeous? The striped blazer is from George, the t-shirt is my own. 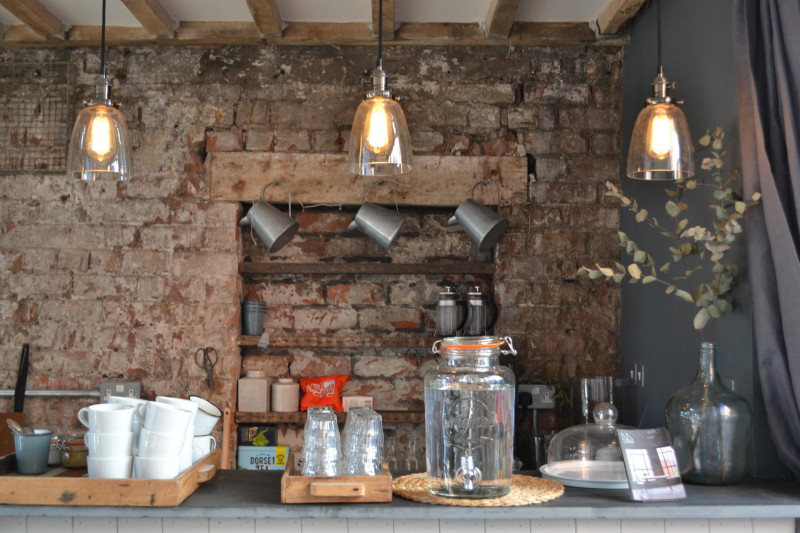 Still, this is real life guys. These jeans are what real life is all about right?

To relax into things, Bee thought it might help to give me a bit of direction.

“Why don’t you do something a bit moody?” she said. “Like you’re in an Adele video?”

“I’ve never seen an Adele video,” I said, “what do they look like?” 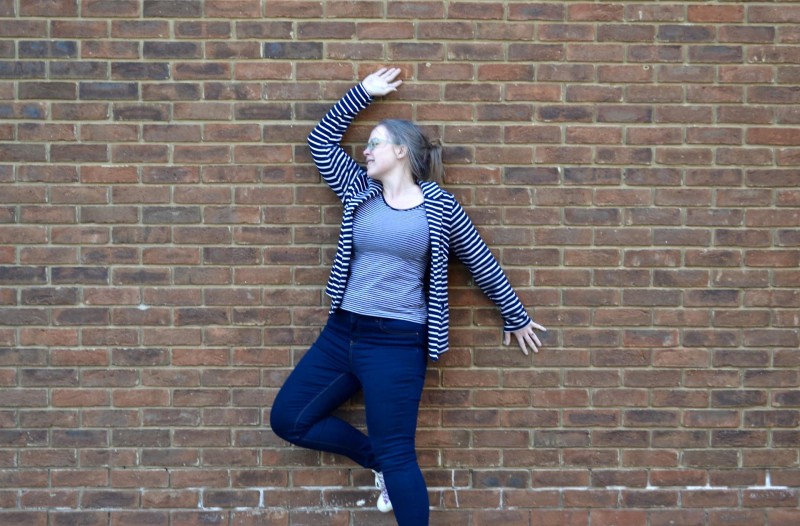 “Never mind,” I said, “I have a photo of this outfit already – the weird face one I took this morning – so I’ll go and put something else on.”

This is a picture of a cat that Bee took while I was getting changed: 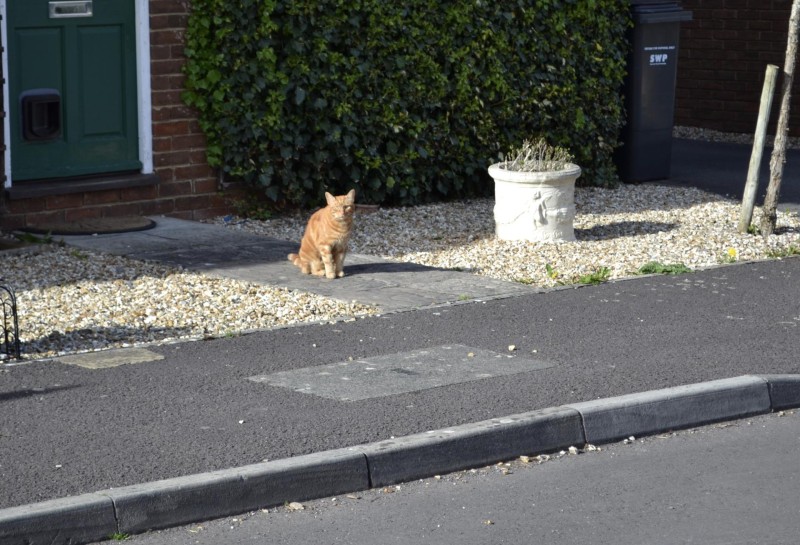 “What’s this look then?” Bee asked, as I reappeared in the same high waisted jeans, but this time with a bright red wrap top.

“Stop taking random pictures of me in the street!” I replied. “We need the wall remember? For Instagrammability.” 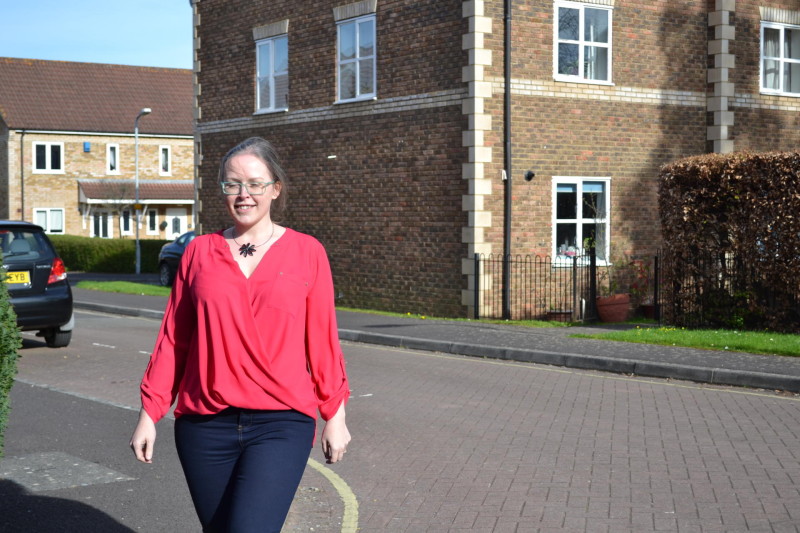 This I decided was my ‘evening look’ – I put a necklace on you see. The top is still really comfortable, but it’s a lovely floaty fabric, which has more of a ‘nice meal out with friends, not at a Wetherspoons’ feel about it.

Bee had more poses in mind.

“You look a bit like Carol Vorderman in that,” she said. “Why don’t you pretend to be a contestant on Countdown?” 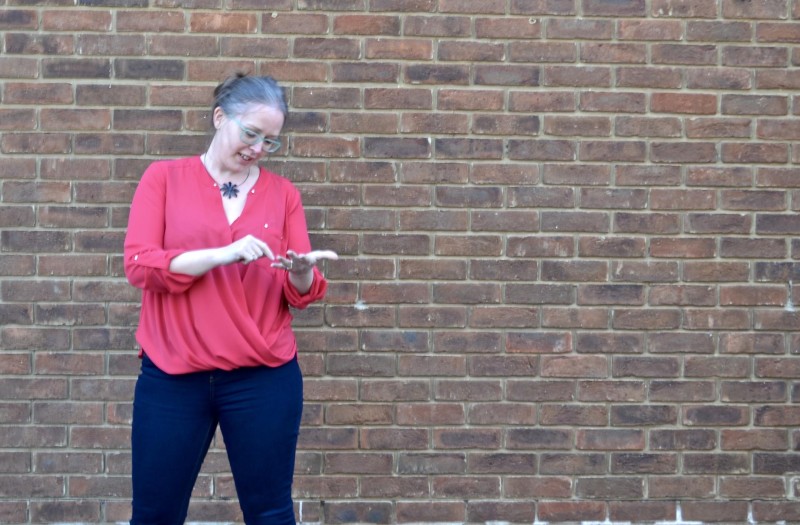 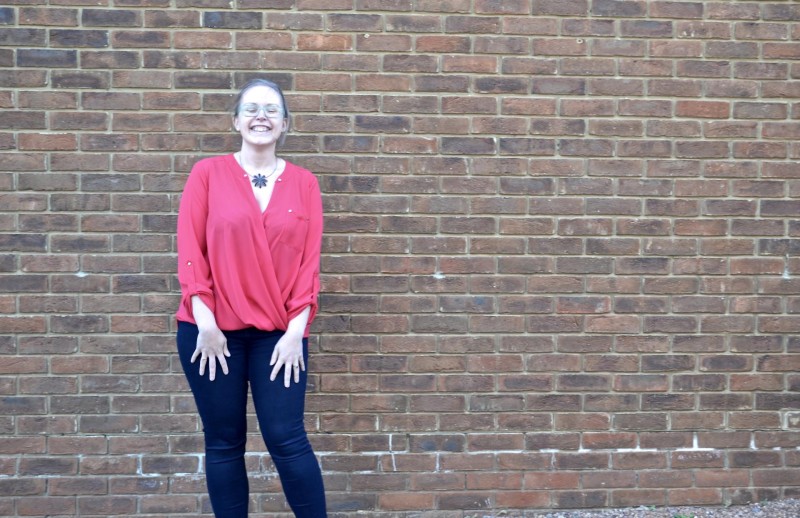 It was time for another quick change, this time into a pair of red cord jeggings and a casual knotted bottom t-shirt. I’m a bit fan of a jegging, and I liked these a lot. The t-shirt was great too – nice and slouchy, perfect for messing about at home at the weekend or a casual day at the office. Bee thought I looked like Father Christmas but I thought she was being unnecessarily critical.

“Why don’t you pretend you’re mates with that bin?” she directed.

I don’t think this was our best work. 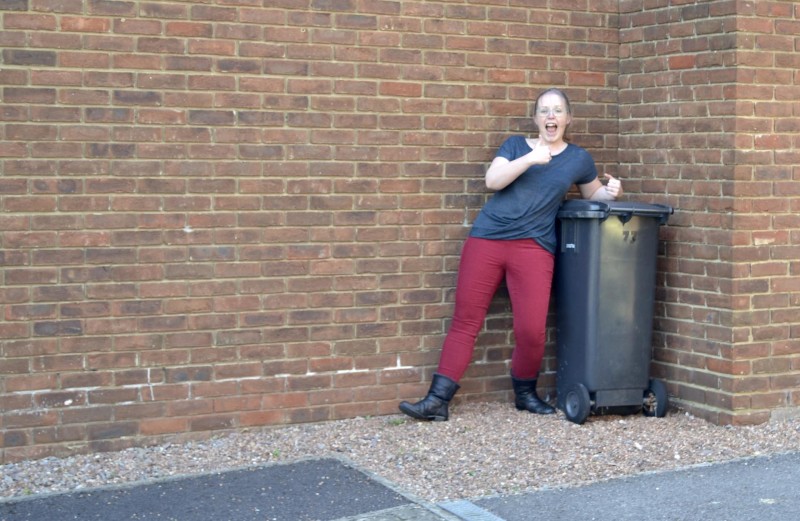 My final pair of jeans were a flared pair, which I wore with a pair of very bright ballet flats from George. The top is my own.

“I might call this my ‘colour pop’ look?” I suggested to Bee.

She raised her eyebrows. 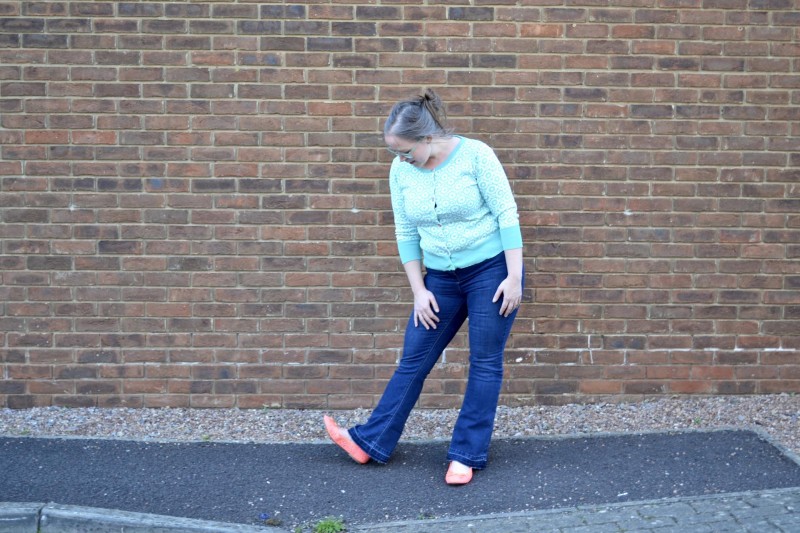 I’ve always been a fan of a flare. In fact, until a couple of years ago they were the only style of jeans I ever wore. I’ve always felt that there was something about a wide bottomed pair of jeans that was better at balancing out my own wide bottom, and I like the scruffy edge of these, that looks a bit like the hem has fallen down but hasn’t. This is a really versatile pair of jeans, that could be worn casually with flat shoes and a t-shirt, or dressed up with heels and something a bit more sparkly.

Bee decided it would be good to finish on a high.

I was sent these clothes from George at Asda for the purposes of this post. All opinions are my own.