You know those awards that I wrote about last week? The parenting award that I really wanted to win but was trying not to get excited about? Well, I only went and bloody won it! Even better, they had a surprise category at the end, for the overall Best UK Blog, chosen from the winners of all 13 categories, and I won that too!

Seriously, I very nearly cried walking up onto that stage a second time. Other categories had been won by proper bloggers like The Londoner and Guido Fawkes, so I never thought for a minute that I would win that one too.

Truth be told, I’d got into rather an anxious state waiting for the first award to be announced. The parenting category was near the end, and so I had plenty of time to wind myself up. I had Bee and my fiancé with me, and they were both being very positive about everything, but that just made it worse. Every time one of them said ‘you’re going to win it’, I just imagined how much more of a disappointment it would be for them if I didn’t. I really wanted to win, but I didn’t want to want to, if that makes sense – I didn’t want to feel silly if I got excited and then my name wasn’t called out.

“We’re on a table in the second row,” said fiancé, “that must be so that you’re nice and close to go and collect your award! I checked one of the other parent bloggers and they’re on table 36, so we know they’re not going to win.”

By the time it got to the parenting category then my heart was properly pounding in my chest. It was a good job that we’d been told already that no speeches were required as I’m not sure I would have been able to talk, and I’d have probably panicked and said something inappropriate. That morning, in the shower, I’d come up with a joke about shaving your legs and getting lucky, but when I told Bee and fiancé about it in the afternoon, to test the water, they had both looked horrified, so I’m glad that didn’t have the opportunity to slip out.

They announced the finalists and I started making all kinds of assumptions in my head – they had announced mine first, so that would surely mean I wasn’t first? The person presenting the awards – Jen from Britmums – was on my table, so that must mean it wasn’t me?

And then it was me!! 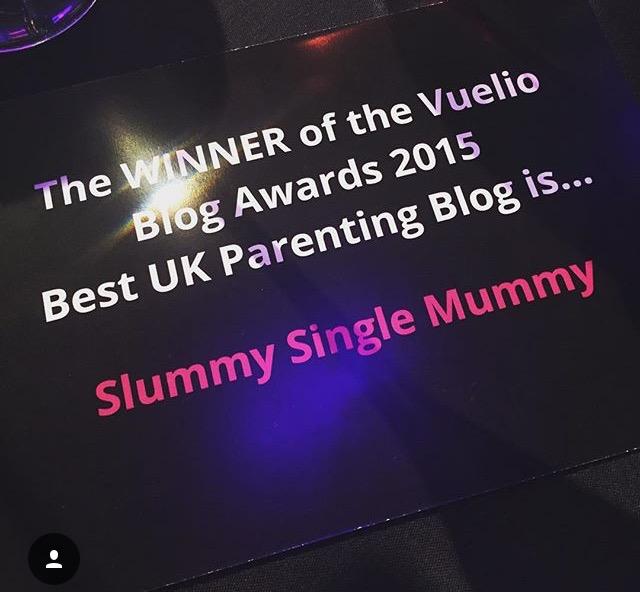 I tottered up onto the stage, worrying a bit about my dress. It was new, and when I had picked it off the rail in the shop a very old lady had cooed over how much she liked it. I wasn’t sure that was a great sign. There was a voice over saying nice things about me, and I had really wanted to be able to listen to this and feel a bit smug, but I didn’t hear any of it – my head was full of the noise of my heart beating and little me inside going ‘Yaaaayyy!’ in a tiny voice.

After coming off stage I was whisked away for an interview, where I tried to say clever things but probably just said thank you lots of times in a squeaky voice, I don’t really remember. Then it was back to the table just in time to hear them say that they had a surprise final category, for an overall winner. I honestly didn’t think for a minute that I would win that one, and I don’t think anyone else did either. When they called out my name my fiancé looked genuinely chocked and said ‘Oh my God!’

Another careful stagger onto the stage, another missed voice over, and another interview where I’m sure I sound even worse, because I’ve already used up all my good stuff in the first one.

And here they are – tada! 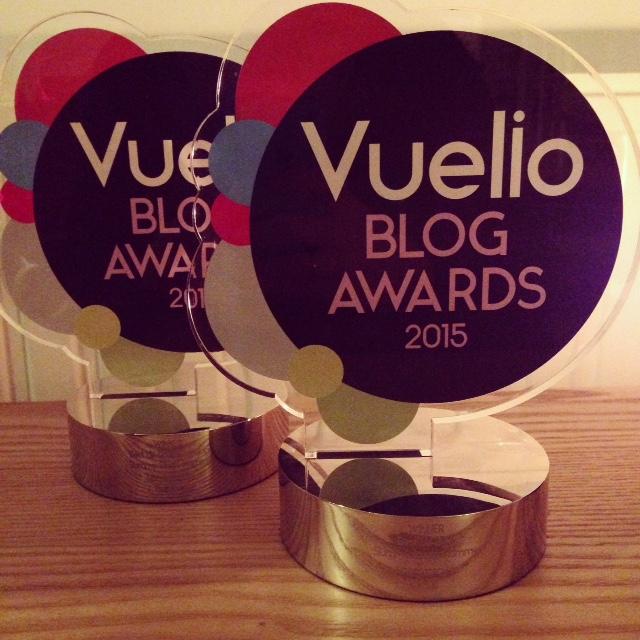 I even took my pants off the radiator behind them, because now I am officially the best blogger in the whole wide world* I have to be fancy like that.

So a big thank you again to everyone who has ever read my blog and for all your support – I couldn’t be more chuffed!