Can you even believe it? It will be my birthday next month, which means two years already since I wrote my 40 things before 40 list and still plenty to tick off, some of which are not feeling terrible affordable. Panic not though, this time next year and all that.

In the meantime, while I save frantically for that trip to Iceland, here are a few things that are making March lovely… 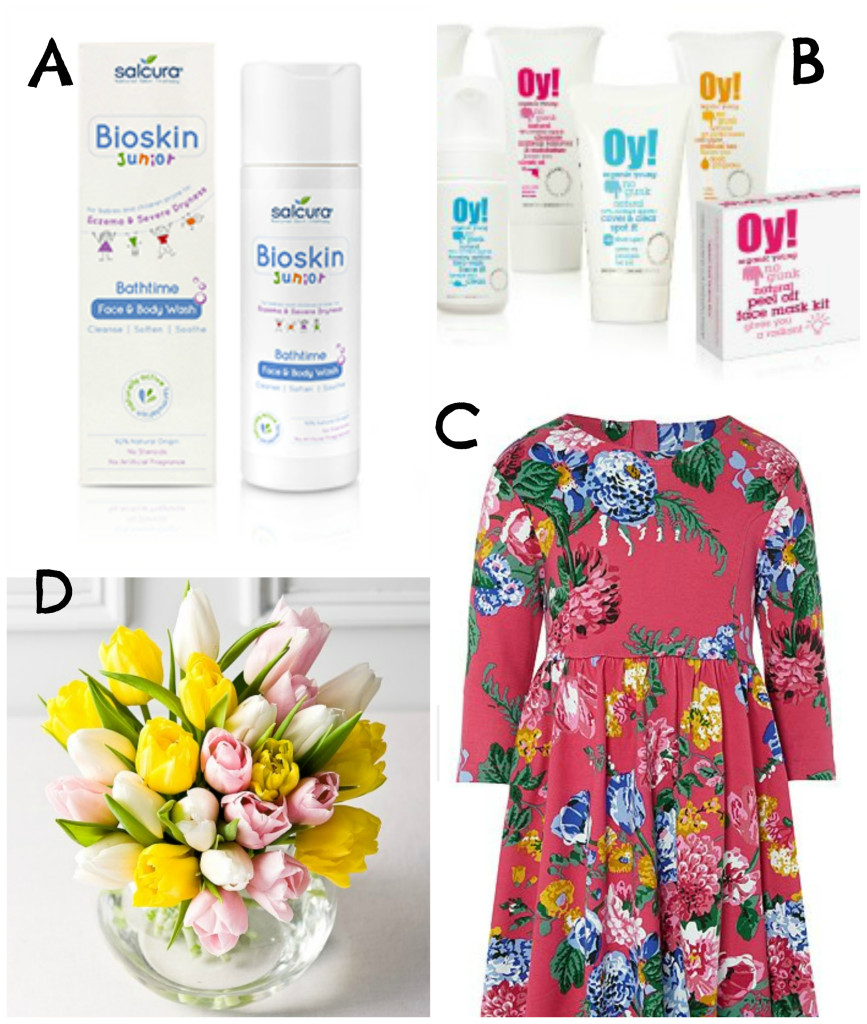 A. While March may be the perfect time for a spring clean, it’s also a great opportunity to keep yourself clean and give your toiletries a bit of a freshen up. (See what I did there? So smooth.)

Belle seems to have been having a bit of a reaction to whatever shampoo we’ve been using lately, so I’ve been trying her with Bioskin Junior shampoo from Salcura. It’s designed to be kind to sensitive, eczema prone scalps and has definitely made a difference to her head. Plus her hair is lovely and silky too.

B. To go with her new hair washing routine, I also thought it about time that Belle was introduced to the joys of deodorant. It’s not that she smells – far from it – but she isn’t always the keenest of children when it comes to showering and I hoped that with a shower gel, cleanser and deodorant to call her own she might feel it to be more of an occasion and less of a chore.

Come in Oy! – the Green People’s lovely range for teenagers, free from nasties, and made with organic ingredients. I asked Belle to try the 3 in 1 cleanser and see what she thought. etc

“I liked it,” she said, “but my face feels a bit stiff. Like when you get soap on your face but don’t wash it off.”

I frowned. “But you did wash it off?”

“But you still have to wash it off, it just has moisturising properties.”

*pause while she washes it off*

C. To further help Belle lift herself from the winter doldrums I thought it might be rather nice to dress her up in something other than her usual uniform of either dark jeans and jumpers or Abbey Lee Dance Company crop top and ‘bootie shorts’. (This is their official name, nothing to do with me, and she isn’t allowed to leave the house in them.)

Instead I am making her wear this wholesome floral dress from Joules at House of Fraser. At first she was sceptical, as it almost comes down to her knees, but when I explained that this was normal, and her other dresses were all mid thigh only because they were age 7-8 and I hadn’t bought her any new clothes recently, she seemed much happier.

D. March is definitely the time for flowers (see point C) and I have been rather spoilt over the last few weeks with them. I had told my boyfriend, as it was our first Valentine’s Day together, that I really wasn’t a fan of the whole commercialised nonsense, and that I didn’t need a special day to tell him I loved him, so instead he bought me the beautiful flowers in the picture below on February 13th. Non Valentine’s Day flowers.

Although Valentine’s Day has passed for another year, we do have Mothering Sunday coming up, and all mummies love flowers. Fact. Sites like VoucherBin are useful if you’re on a budget or if you’re currently considering your flower delivery options then do check out Debenhams. I know right? Who knew Debenhams did flowers? They do a lovely range of Mother’s Day flowers though, and have very kindly given me a discount code to share with you – just enter DFBLOG25 when you check out for 25% off.

What have been your favourite things so far this month?

I chose to be sent these items for the purposes of this post as I do love them. All opinions are my own.