I heard a story on BBC Somerset last week that for some reason really wound me up. It was about three local cemeteries approving the use of QR codes on gravestones. After a little bit of research I discovered that this has been a thing for a while now, but it was the first I had heard of it and it made me inexplicably irate.

The idea is pretty harmless – scan the QR code and you can find out more about the person buried there. Nothing offensive in that is there? So why did it make me feel so uncomfortable? 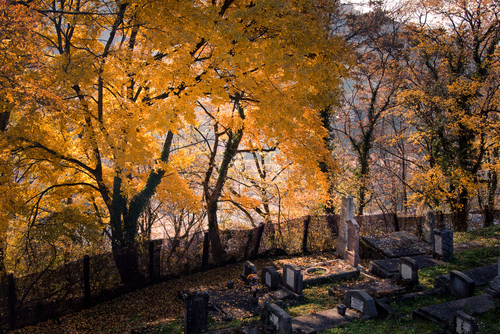 Partly I suspect it was do to with the choice of technology. I mean, seriously, QR codes? Did they ever even really become a thing?? The technology is going to become so quickly outdated, how useful is it going to really be? It feels like something out of a science fiction novel – how stupid is it going to look 100 years from now when headstones are covered with these weird squares that mean nothing?

I did a quick survey in my office:

“Would you put a QR code on your gravestone?”

The lovely thing about cemeteries is that you can wander around them now and read about the people who lived and died hundreds of years ago, conjuring up pictures in your mind. Sure, you may only know the basic details, but that’s the fun of it. OK, so not fun maybe, but you know what I mean. Cemeteries and graveyards are, in my mind at least, places of beauty and tranquillity. QR codes are ugly. I hate the thought of the peace shattered by someone clicking a link to a YouTube video. It just feels wrong.

When I die, I like the idea of people 100 years in the future reading my gravestone and imagining for themselves the details of my life. Perhaps they will picture me as some kind of glamorous heroine, thick glossy hair tumbling about my shoulders; I don’t want to shatter the illusion by having them click on a link and finding my Facebook page. That’s not sexy and mysterious is it??

Partly too it feels intrusive. Anybody who matters in your life will know everything they need to know already, they won’t need to watch a video of you introducing yourself. Isn’t it a bit nosy to click on a QR code on a gravestone? Isn’t it just some weird of kind of voyeurism?

What do you think? Would you put a QR code on your gravestone?