I love a word game and have, sometimes to my own detriment, always been a sucker for a man who knows where to put his scrabble tile.

It will come as no surprise then to hear that I have spent a good hour of work time this morning playing Letterfall – a new word game from Scottish Friendly with cash prizes! Woohoo! You choose which country you’d like to represent and the top scorers from each win £100 and the chance to go to the grand final in Glasgow at the end of November.

The game is being run as part of Scottish Friendly’s 15 year long partnership with the Scottish Book Trust. The Letterfall UK Championship ties into their work of encouraging children’s literacy; the hope being that parents and big kids will find the game enjoyable, rewarding and educational.

It’s a sort of Tetris for word lovers – make as many words as you can before the screen fills up and you have a panic attack.

The first time I played I scored 229, which given the England high score of 10,744 is pretty poor. No Scottish Friendly, I don’t think everyone on Facebook needs to know about that. 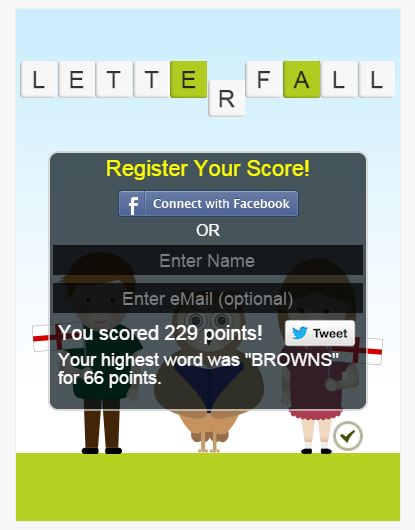 The second time I tried I got 1,096, which wasn’t quite so feeble, but then I decided that perhaps I would do better switching to the iPad and taking advantage of the touch screen. Third time lucky and I scored 1,545. Fourth go I was up to 1,887 – including 100 points for ‘QUIFF’ –  but I barely drew breath the whole time and by the end I was beside myself. S Kemp and Campbell must be made of stronger stuff than me. 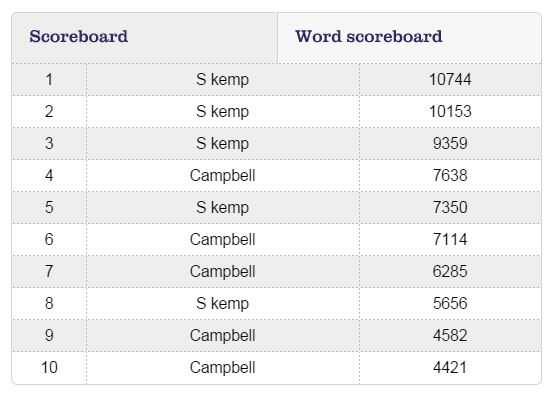 So, first things first, can you beat my score of 1,887? More importantly, can you give S Kemp a run for their money? Play now to find out and follow Scottish Friendly on Twitter for all their latest news.

The Letterfall competition has now finished and I am very pleased (and a little envious) to announce that the winner is 20 year old Nichola Leaver. Nichola finished the tournament in top spot having used words such as ‘quivered’, ‘cuticles’ and ‘flounder’ to arrive at an impressive score of 62,414 – more than 13,000 points clear of her nearest rival.

It makes my 1,887 look rather pathetic doesn’t it?

Ms Leaver commented: “I’ve always loved word games but to be honest, I never thought I was going to win. Letterfall is an easy game to play, but when the pressure is on, especially when you are closing in on the top score, it did get a little nerve-racking.”

Well yes, that’s easy for you to say Ms Leaver. ‘A little nerve-racking’?? If by that you mean heart attack inducing then I agree, otherwise no.

Over 1,500 games were played across the UK, resulting in interesting words like bramblings, sawhorses and hogshead.

And quiff of course.