No matter how much better I got, I still essentially felt like I did that first time  – breathless, exhausted, and like I would rather just lie down on the pavement and have a little cry. In fact, the last time I went running, about three weeks ago now, that very nearly did happen. OK, so I didn’t actually lie on the floor, but I did cry, and I did stop half way through and instead walk home and lie on the sofa in the dark feeling ashamed.*

It was at this point that I decided to give up running.

It was a big decision. I don’t want to be that person – the one who tries something, decides they can’t be bothered, and just gives up – but the more I thought about it and the more friends I spoke to, I realised that I wasn’t that person. I had tried, really hard, and ultimately just decided that running isn’t my thing. I play netball every week and am keen to try out other sports, just not ones that involve running a lot. That’s OK isn’t it?

In a bid to further validate my decision I have come up with nine excellent reasons to give up running. If you are a runner but read this list with a tear in your eye, knowing it to be true, then I hereby give you permission to shove your trainers to the bottom of the wardrobe and try something different. We simply aren’t all runners, and that’s alright. 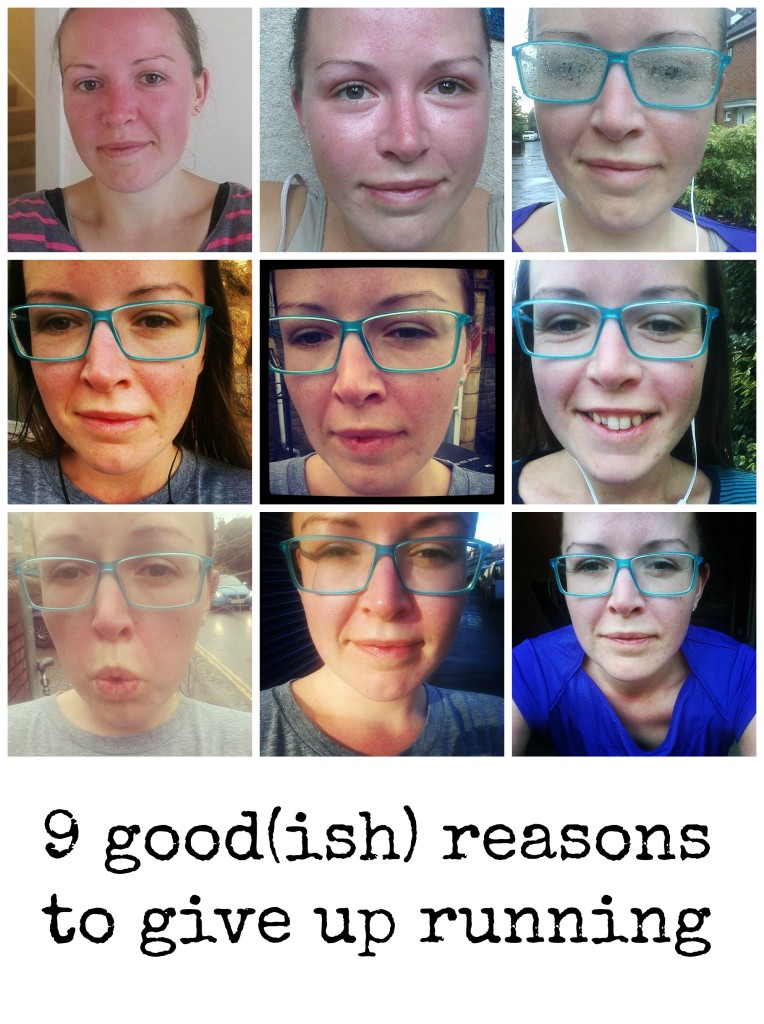 1. Running is boring. I don’t mean just a bit dull, I mean mind-crushingly tedious. Running with a partner alleviated this a little, but running on my own was practically impossible. Every time I would run for what felt like half an hour, swear blind the app must be broken, and check it to discover I had been going for six minutes. Time literally slows when you are running. I tried music, audio books, everything like that. I didn’t work. It is just too boring.

2. I hate running. I hate every bit of it – the knowing that I have to do it, the actually doing it, the thinking about it – all of it. There is a brief minute or two after you have just finished where you feel a little bit good about yourself, and then you remember that you have to do it again in 48 hours and it’s just the start of another hideous countdown.

3. Running is bad for your self-esteem. It was for me anyway. The whole time I was running I was shouting in my head ‘I hate this! I want to stop! Why can’t you breath properly? Why are you so hopeless? Stop shouting at yourself and just run you loser!’ Not kind words.

4. Running is expensive. OK, so not really, but a good pair of trainers could set you back about £100, and for that you could buy four bottles of Bombay Sapphire. Gin and tonic or jog round the park? Let me think about that…

6. I hate running. Did I mention this?

7. Running makes you spotty. I don’t know if this is actually a running fact, but I swear my forehead has got spottier since I started running.

8. Running is bad for your joints. Again, probably a myth made up by people like me to ease their guilt, but it sounds plausible doesn’t it? All that bouncing, it can’t be good for you.

9. I hate running. I may have mentioned this one already, but it’s a point worth reiterating.

*Cue flashbacks to the paper round I had when I was 14, where I got half way round, developed a migraine, and had to stop at my Gran and Grandad’s house and get them to phone the newsagent. I never did get to day two with that job.