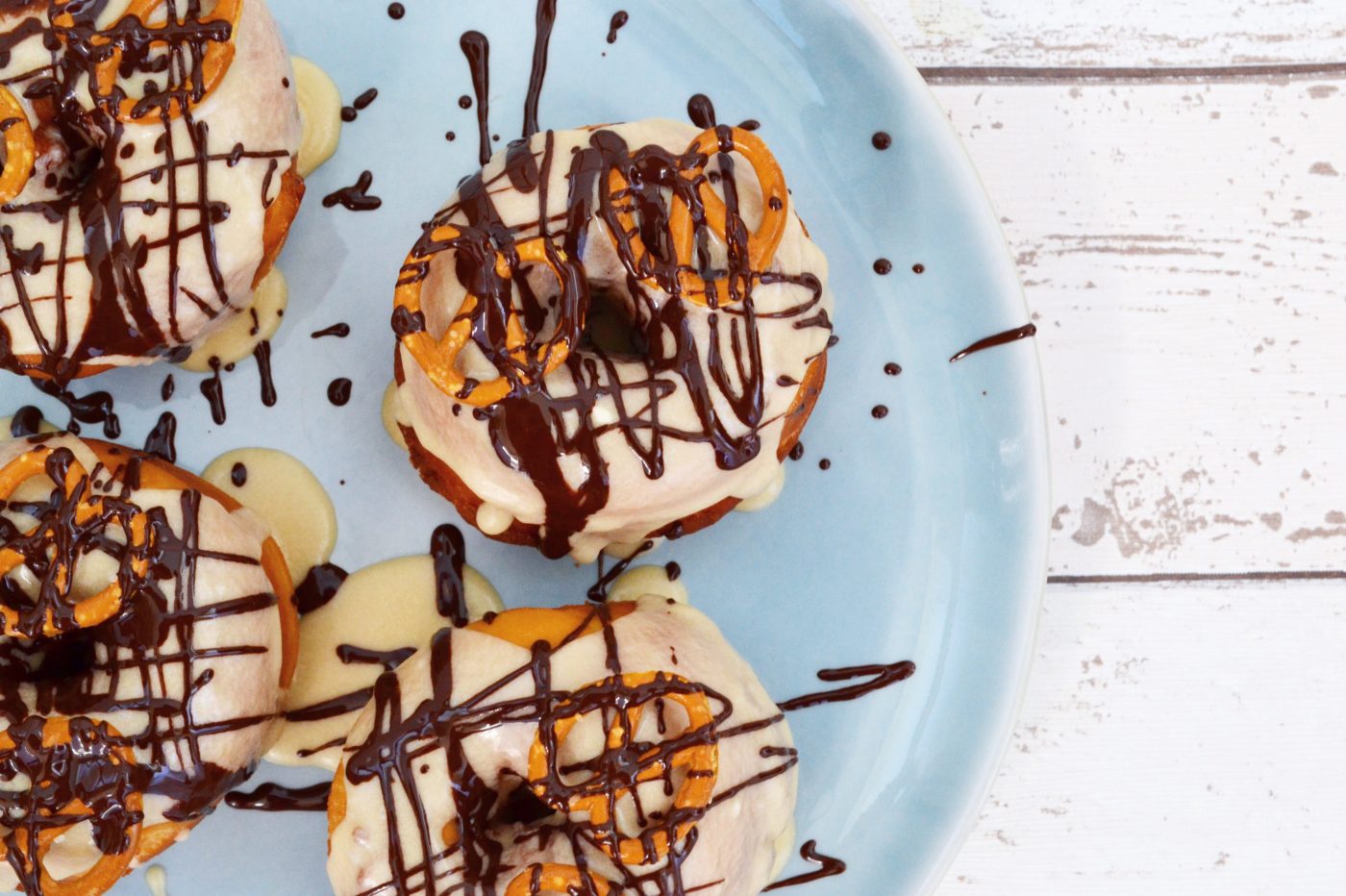 A little while ago I discovered the joy that is getting cookery books out of the library.

I’ve always gone to the library, obviously, I’ve not just suddenly discovered it as concept. I’ve facilitated my fair share of summer reading challenges with the girls, and been to story times, and done all the usual library things, but for some reason it had never occurred to be to get recipe books from the library. Silly really, as they are BOOKS, dur.

So anyway a few weeks ago I went along to the library, with my tote bag, and there were shelves and shelves of them! I sat on the floor and looked at all the pictures of all the things I’d probably never get around to making, but liked looking at nonetheless. I concentrated on baking because I find it more enjoyable cooking when I’m not hungry, just for the fun of making something. When you’ve been answering the ‘what’s for tea’ question every day at 4.30pm for over 20 years then the joy of cooking actual meals becomes a teeny bit diminished.

I ended up with a big stack of books for my tote bag and one of them was DONUTS by Vicky Graham. 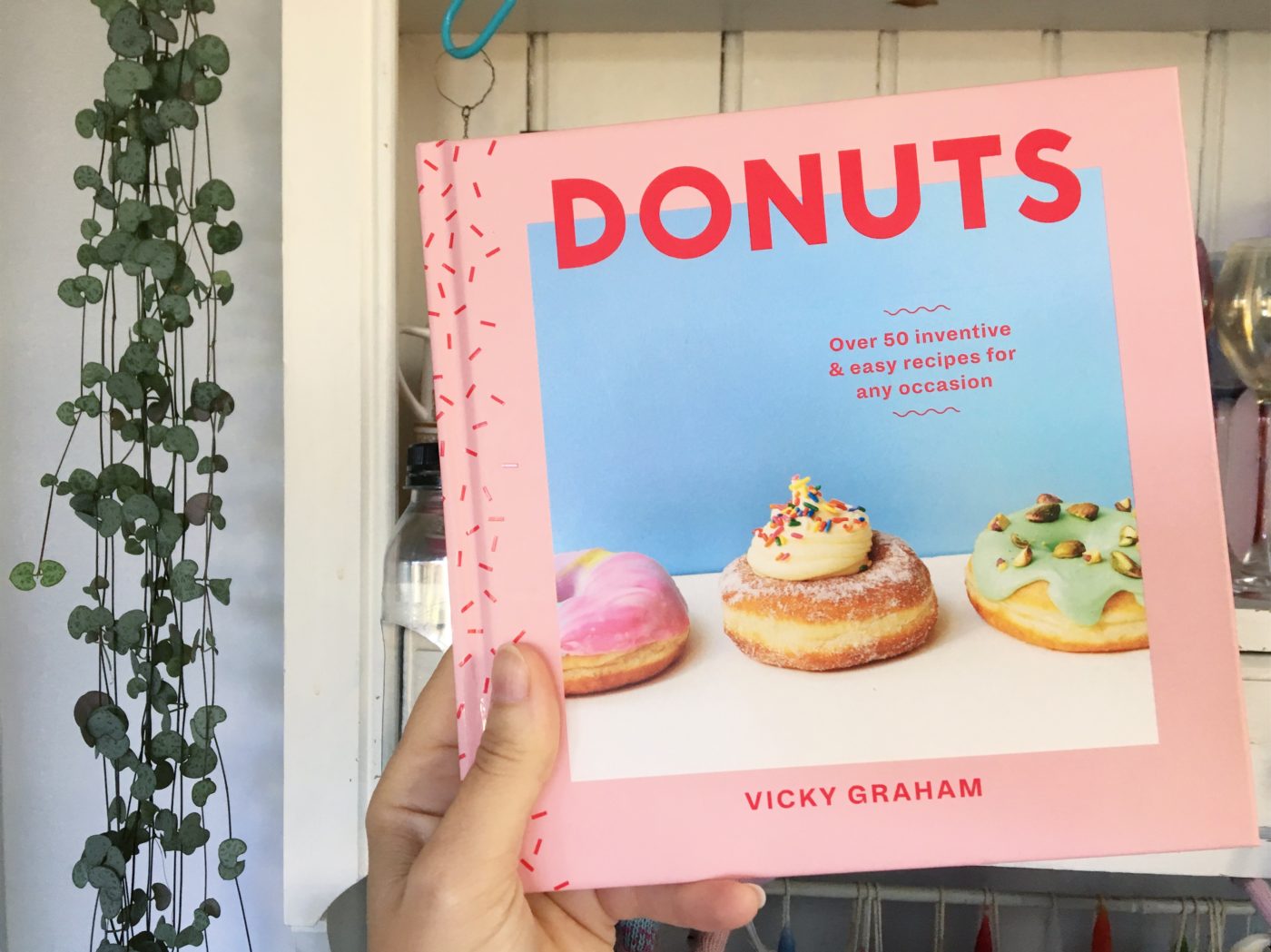 I’ve never made a donut before and to be honest I’ve never been entirely sure whether I even like donuts. I’m not even certain how to write donut – is it donut or doughnut? Who knows. I’m going with donut in this post rather than doughnut, even though that’s probably the American spelling, because that’s the name of the book and so that’s that.

Bee and Belle both LOVE donuts, (we even made Bee pink donut balloons once), and the pictures were just so pretty, I decided to give them a go. (I asked Vicky if it was okay to share the full recipe and she said it was, so we’re all good.)

Vicky’s basic donut recipe says it makes 12 full sized donuts or 24 mini donuts, but I always try to bake in smaller quantities. Partly this is to save on food waste should it not go well, but mainly it’s to save myself from doing things like eating 12 donuts at a time.

My recipe uses a third of Vicky’s amounts and actually made six decent sized donuts by my donut standards, but just scale up if you’re expecting guests or you have a particularly self-indulgent evening planned and want to live your absolute best donut life.

I let Belle choose which donuts she wanted me to make and she picked The Golden Girl – a caramel frosting with salted pretzels and dark chocolate. I was on board with this as I’ve always wanted to be Blanche Devereux.

How to make basic donut dough

To make a small quantity of basic donut dough you will need:

Place the flour, sugar and butter in a large bowl and, on opposite sides, add the salt and yeast. Break in the egg, add the milk and use your hand to bring the dough together. (You can use a stand mixer, I just don’t have one.) Add the water while you mix it, until you end up with a sticky dough.

Knead the dough on a floured surface for 10 minutes until you have a smooth, elastic dough. (Mine seemed to eat up quite a bit of extra flour during the kneading. Not sure how normal this is.)

Pop your dough into a bowl, cover with a damp tea towel and leave for 30-90 minutes until doubled in size.

Meanwhile, grease a baking sheet with the vegetable oil.

Once your dough has risen, tip it onto a floured surface and knead to form a ball. Use a floured rolling pin to roll it to 2cm thickness and cut out donut shapes using a donut cutter. I didn’t have an actual donut cutter, so I just cut out the main shape using a biscuit cutter and then fashioned a hole in the middle with a knife to make a dough ring. It seemed to go okay.

Space out your donut shapes on the greased baking tray and re-roll your leftovers and cut out more dough rings until you’ve used all your dough. Leave to rise for another 10-20 minutes until it springs back when you touch it.

How to cook your own donuts

The Donut book does give an option for baked donuts, but honestly, where’s the fun in that? Deep fry them or don’t bother I reckon. Just have a Rich Tea biscuit or something if you’re not going to make the effort.

To cook your donuts, preheat a deep fat fryer, or lots of oil in a heavy based pan, to 180 degrees. Carefully drop a donut into the oil using a fish slice, and cook each one for about 60 seconds on each side until golden brown. I timed mine exactly, but a couple of them were a teeny bit doughy in places and could have done with a little longer, so just be warned – you might want to do a test one and check it first.

Remove with tongs and place on a baking tray lined with kitchen roll to soak up the excess oil.

And there they are – your very own homemade donuts! 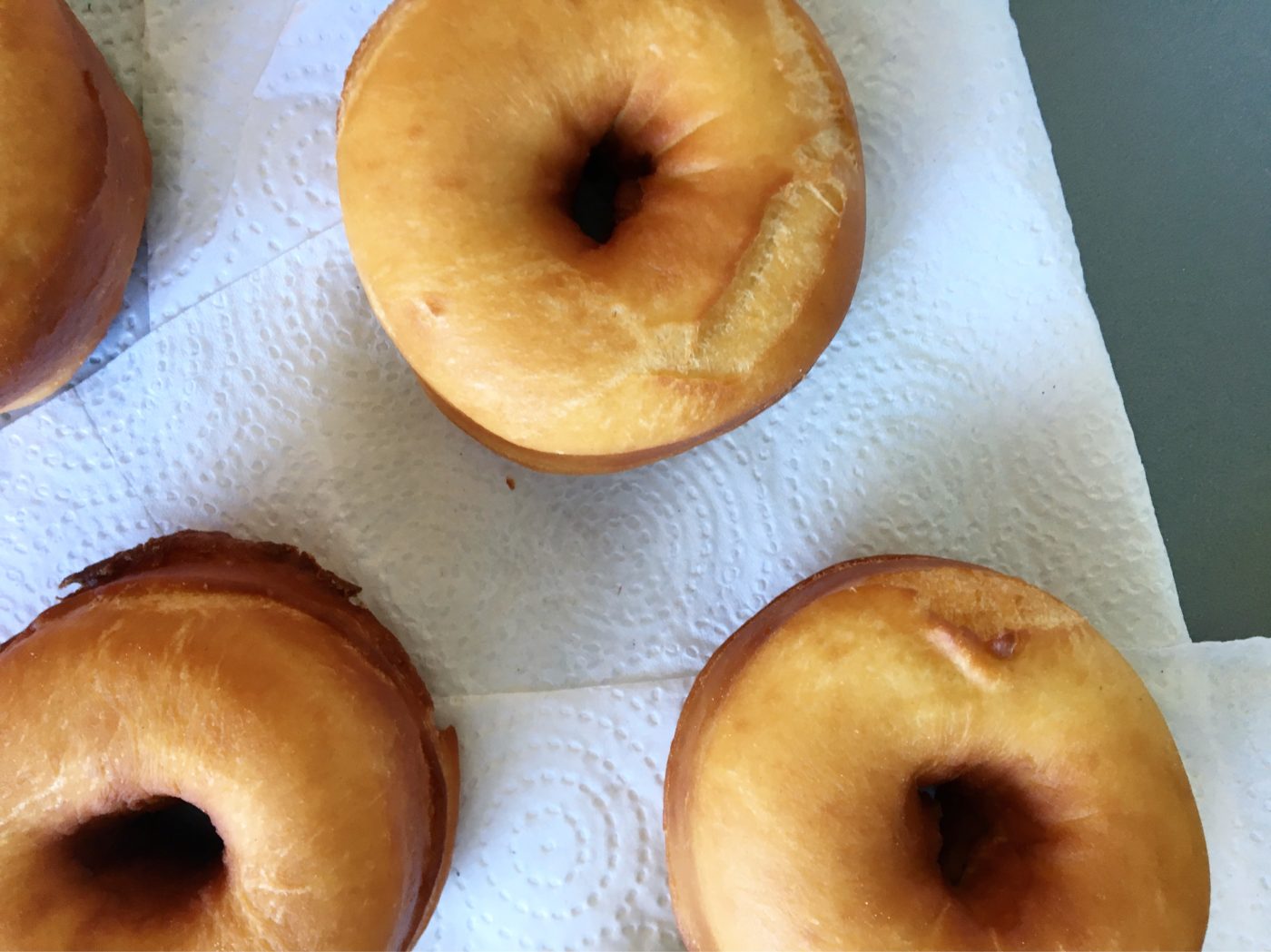 This is really the hard bit over with. The next bit is the decoration, which is the whole point of the donut book really.

The Golden Girl is a caramel sauce with pretzels and dark chocolate, and quite easy to make. I’d recommend making the initial caramel while the donuts are on their first rise, and then it has plenty of time to cool.

To make the caramel sauce (still in my smaller quantities) you will need:

Put the butter, sugars and syrup into a pan and pop on a low heat, stirring continuously until the sugar has dissolved and the mixture starts to bubble. Add the milk, still stirring, then add the salt. Once everything has definitely dissolved, remove from the heat and leave to cool completely.

Once it’s cool, add the icing sugar and mix to form a smooth, glossy icing. The book says this will be tricky as it will be thick, but mine wasn’t – if anything it was too runny and I ended up not using all of the liquid. I wonder if I could have done with simmering the caramel a little longer before I added the milk? Anyway. It tasted fine.

Spoon the icing over your donuts, stick on a few pretzels, and finish by drizzling with some melted dark chocolate. 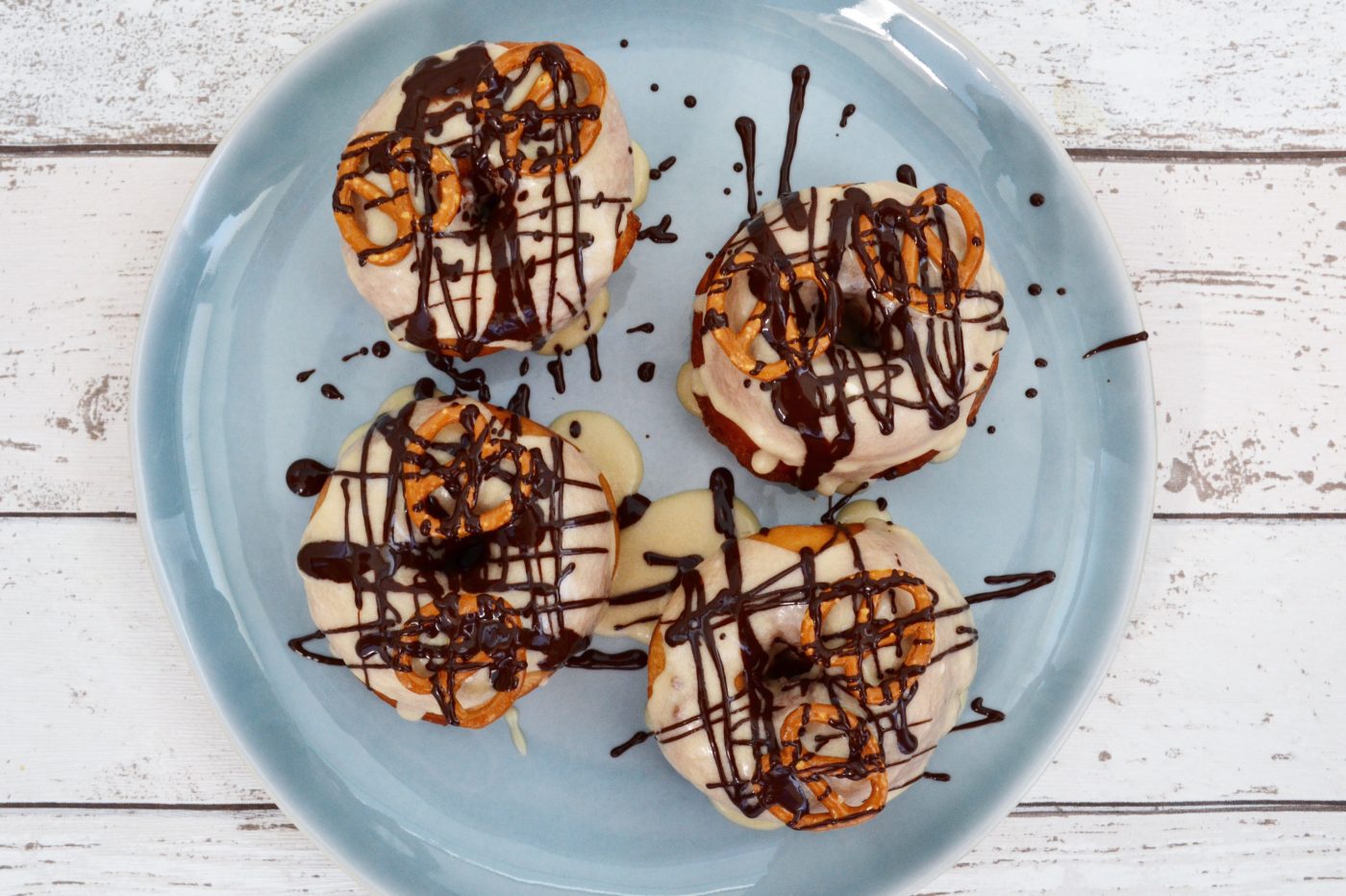 Now. Having said that I wasn’t sure I liked donuts, I did manage to force one down. Okay, one and a half.

They were actually really nice, and I think because they weren’t totally covered in sugar like so many donuts are, they weren’t over the top in terms of sweetness. The pretzels helped to add a savoury edge and I used a 74% dark chocolate, which was YUM. (Technical term.)

If you fancy having a go at homemade donuts then I’d definitely say to give them a try. Although time consuming because of the dough, they weren’t difficult and the Golden Girl topping will definitely impress your friends.

Next I think I might have a go at party ring donuts, decorated to look like the homemade party rings I made a few years ago. How cool would that look on a donut??

Are you a donut fan? What’s your favourite topping? Do you say donut or doughnut?? Leave a comment and let me know! 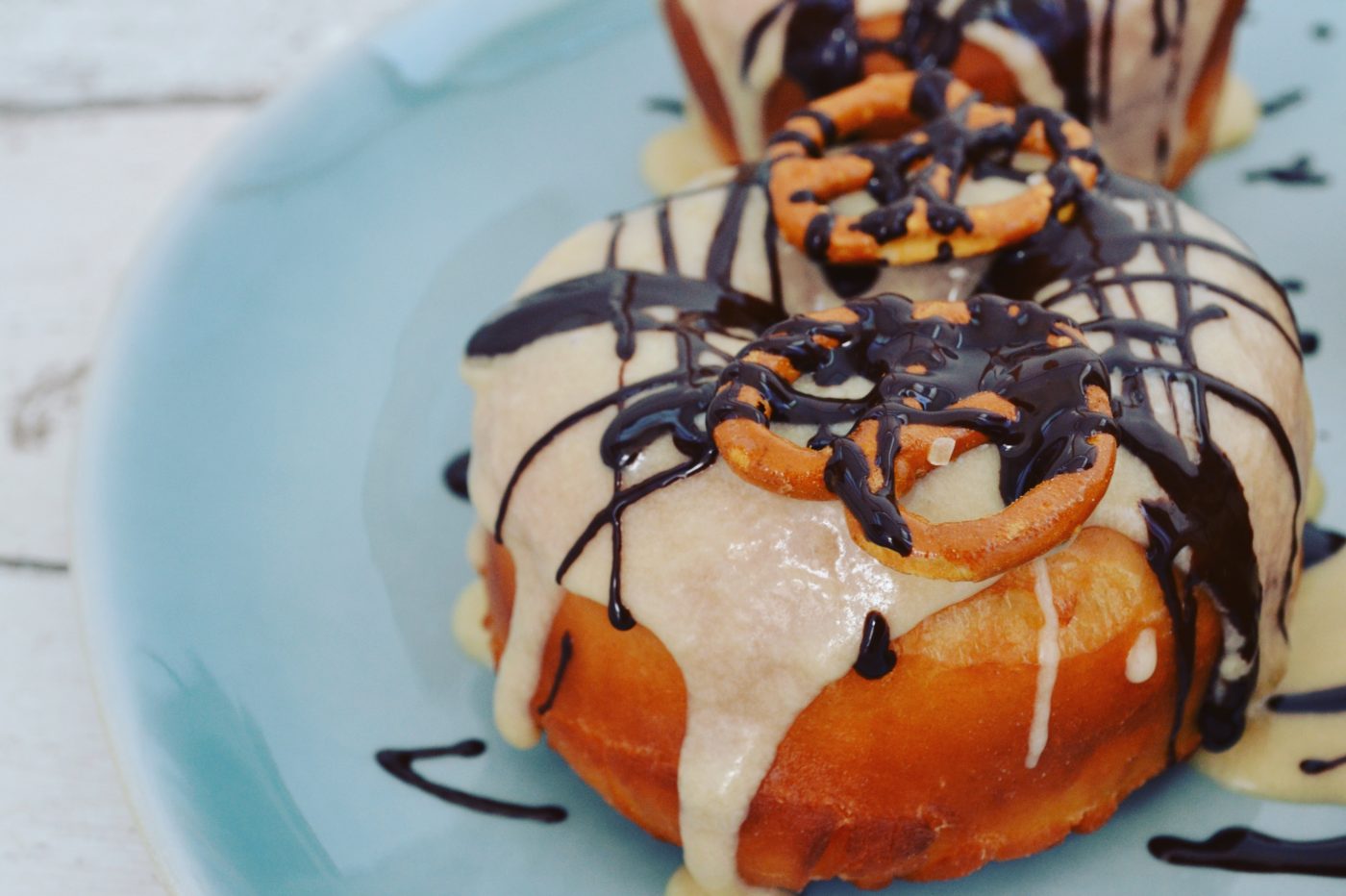