I could not be more excited today.

You know how much I love making things that look like other things, (remember the homemade party rings and homemade Tunnock’s teacakes?), well today I’ve been actually, properly recruited to make my own homemade Snickers bars! I know, it’s my dream job right? I am so chuffed with it, honestly, I can’t tell you.

I’ve been roped in by Snackmasters to help promote their new series. Snackmasters is a Channel 4 show where top chefs go head to head to try to recreate an iconic dish or snack. I loved the first series, where they made things like a Burger King Whopper and a bag of Monster Munch, and the most recent series is shaping up to be just as fun, with chefs recreating KFC, Wagon Wheels, and, which is were I come in, the Snickers bar.

Now I’m going to say straight up that although I haven’t watched the episode yet, I’m 100% confident that if I was one of the chefs, that I would win. It’s a bold claim I know, but every single person I’ve tried my homemade Snickers bars on has said that they are EVEN BETTER than the original. Now you could argue that in a competition where the aim is to copy something, that making your version even better than the original equals a failure – to those people I say get in the bin.

My homemade Snickers bars are amazing and that’s the end. 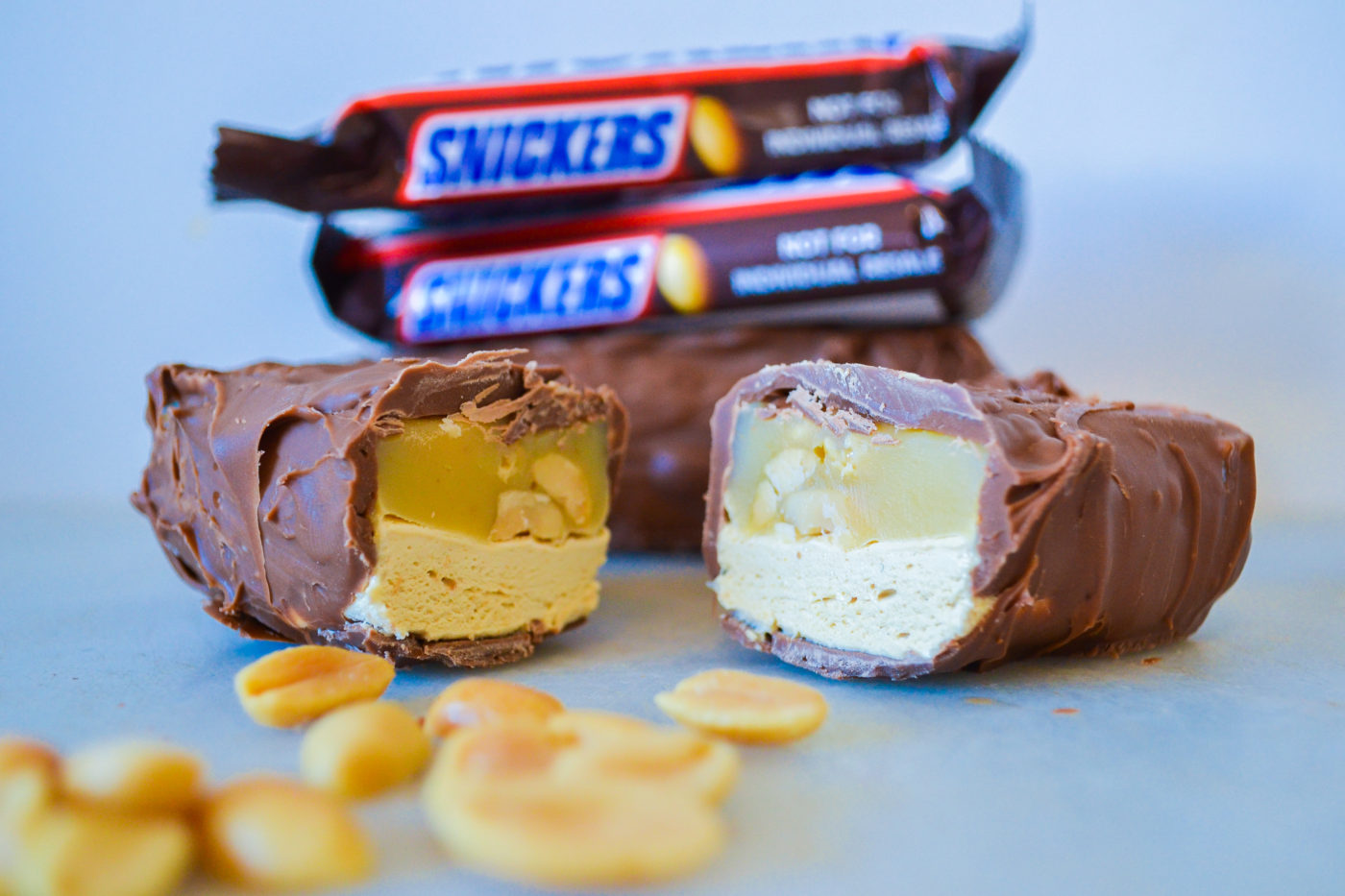 What’s in a homemade Snickers bar?

An excellent first question. A Snickers bar has three main components – a caramel layer, a peanut nougat layer and a chocolate coating. Each layer needs to be made individually and then combined to create the final chocolatey treat.

I decided to use the caramel from my millionaire’s shortbread recipe because it’s A) delicious and B) easy, and those are the two things I look for in any recipe. The nougat is a peanut butter nougat, which it turns out is quite a bit more straightforward than it seems, and then the chocolate is simply that – melted chocolate. You can do fancy things with tempering to make your Snickers chocolate bars glossy and professional looking but I admit that I didn’t do that because I have other things in my life to be honest.

When did Marathon become Snickers?

Marathon changed its name to Snickers in 1990, which is over 30 years ago.

Let’s just try not to think about that too much shall we?

Marathon bars, as they were known in the UK, were renamed Snickers in 1990 because Mars wanted their name to be consistent around the world.

Have Snickers bars got smaller?

Yes! I had thought that perhaps it was just ME getting BIGGER but no, lots of chocolate bars, including Snickers, have got sneakily smaller since the good old days when you could buy a bag of crisps for 10p and play out on the street etc etc.

Snickers bars were actually shrunk from 58g down to 45g in 2013, which is quite a sizable drop. It might explain why my homemade Snickers bars turned out just a teeny bit bigger than a standard Snickers bar. (If I’d been on Snackmasters obviously I would have measured them before I started, but I’m a bit slapdash in real life.)

This knowledge provokes a strange mix of emotions – on the one had I feel disillusioned with the world in general, but also it’s nice to know I’m not going mad. That’s always a comfort. 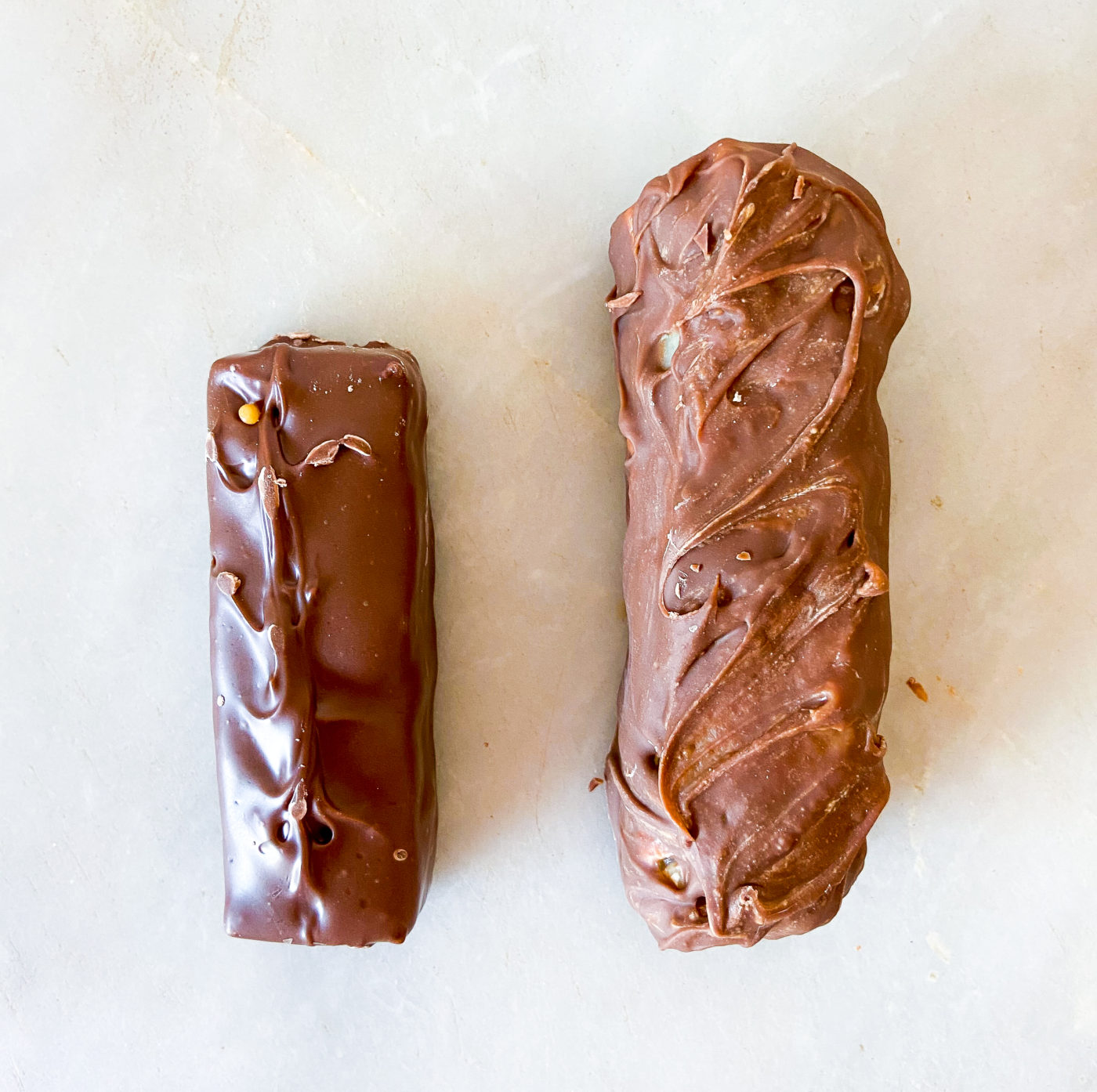 That one was easy wasn’t it? My homemade Snickers are completely gluten free, no gluten to see here.

Enough chit chat, how do I make a Snickers?

You’re right, let’s brush aside the Snickers facts, wipe down our kitchen surfaces, and get down to it.

To make homemade Snickers bars, you will need: 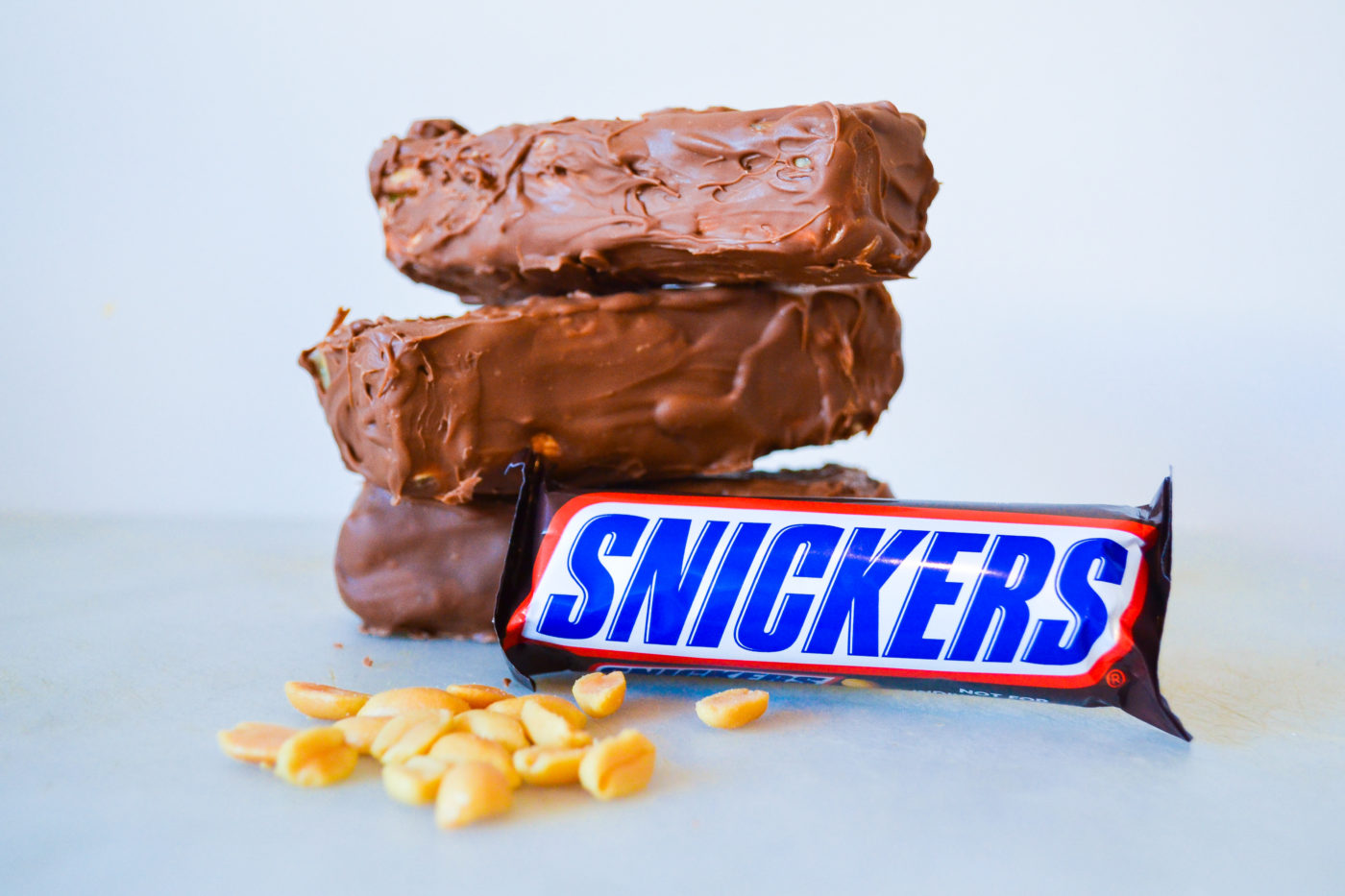 We’re going to start with the caramel layer, as this is the most dense and would otherwise weigh down the nougat while it sets. Before you start, line a 9 inch square tray with greaseproof paper or clingfilm – something that will make it easy to lift the layers out once they are solid. (Don’t use foil as this tends to stick and leave little bits behind when you try and peel it off.)

To make the caramel, put the condensed milk, butter, caster sugar and 80g of golden syrup into a saucepan, (a thick base is best), and very gently heat until the sugar has dissolved and the butter is melted. I stirred mine continuously with a metal whisk to stop it sticking. Would recommend.

Once the mixture is smooth, turn up the heat and bring to the boil for about five minutes until it gets thicker and turns more of a fudgey colour. Keep up the stirring as you go. Once you’re happy that your caramel is a good colour and a nice thick pouring consistency, remove from the heat and stir in the peanuts. Pour into the lined tin and leave to set in the fridge for a couple of hours. 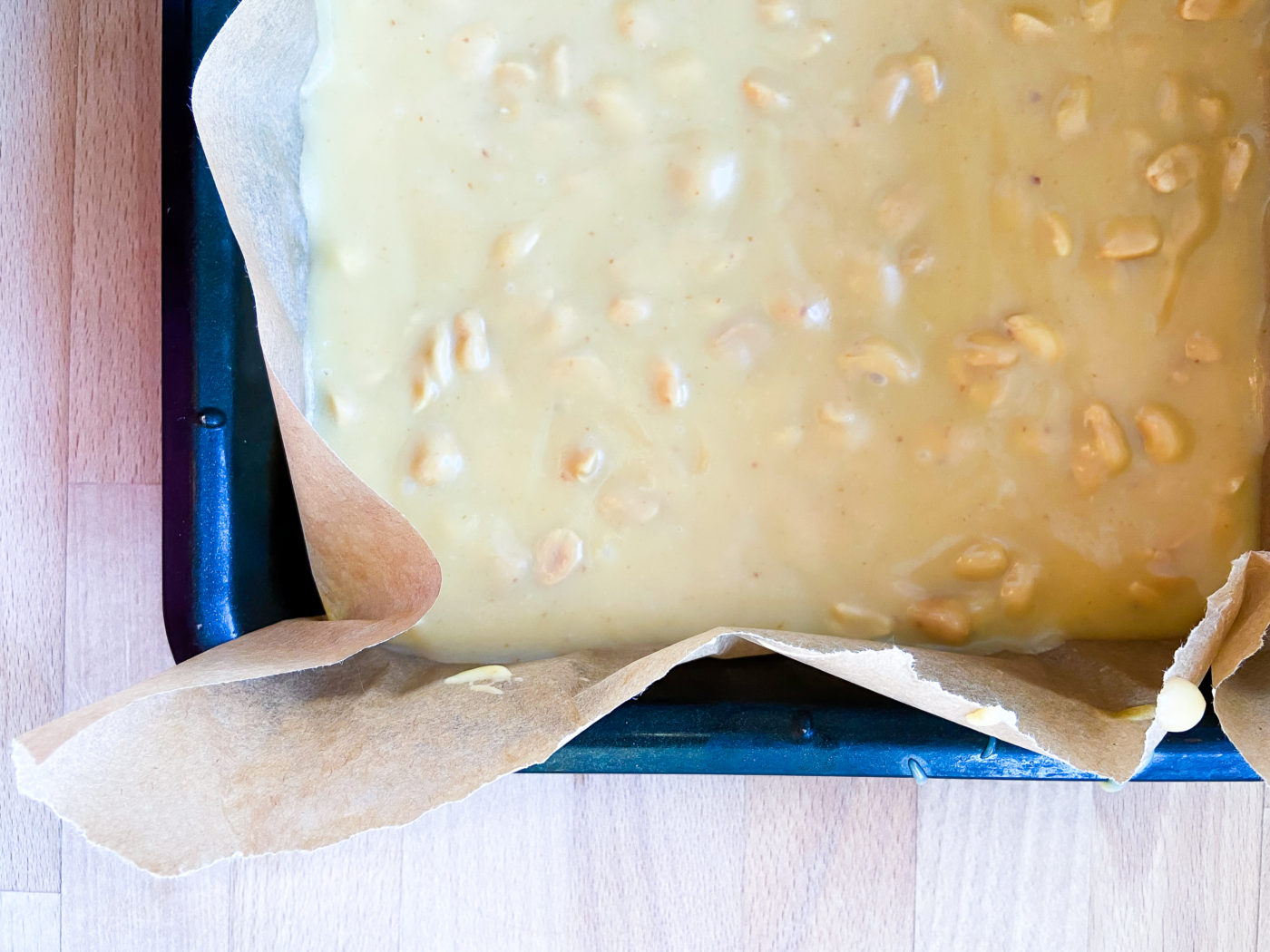 To make the peanut butter nougat, you will need a thermometer, and I suggest oiling your spatula, as the actress said to the bishop, so that the nougat doesn’t stick as you’re mixing in the peanut butter at the end.

Pop the granulated sugar, 175g golden syrup and the water into a saucepan and place over medium-high heat. Stir the mixture until the sugar has completely dissolved. At the same time, place your egg white in a large bowl, and have an electric whisk ready.

Keep heating your sugar mixture until it reaches 270°F. You’re aiming for 275°F ultimately, so just before this is the time to get your egg ready, so add the salt to the egg white and beat at high speed until it’s in stiff peaks.

Once the sugar mixture gets to 275°F, remove from heat. With your whisk still on high, very slowly pour just a small amount of the hot syrup in a thin stream down the side of the bowl, avoiding the whisk. Keep whisking, and let the syrup completely incorporate before adding more.

Keep going, nice and slowly, until you’ve added all the syrup, and then keep whisking until the nougat pulls away from the sides of the bowl. Use your oiled spatula to stir in the peanut butter. Immediately spread the nougat mixture in a layer on top of the caramel and pop it back in the fridge to let it firm up. 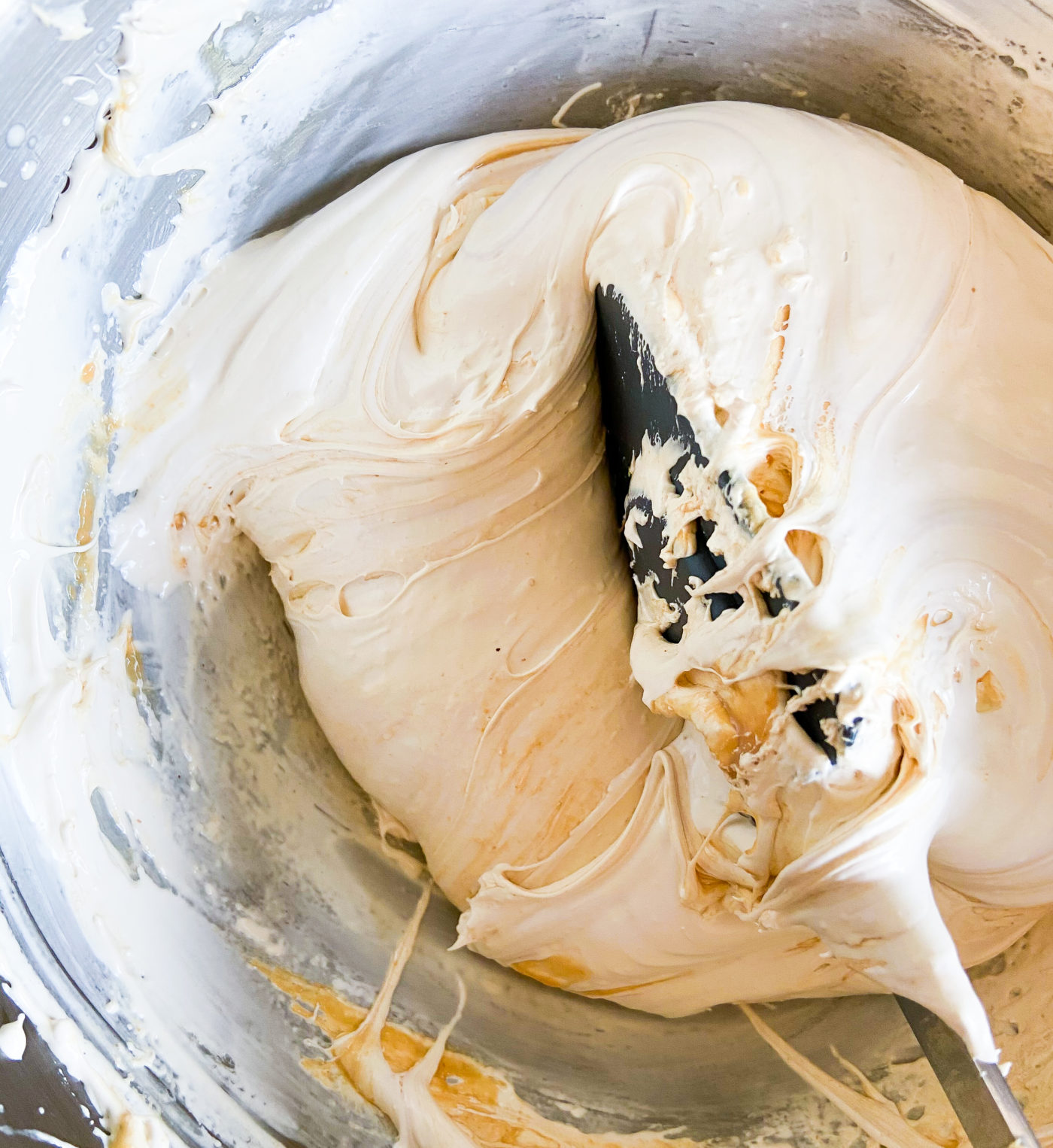 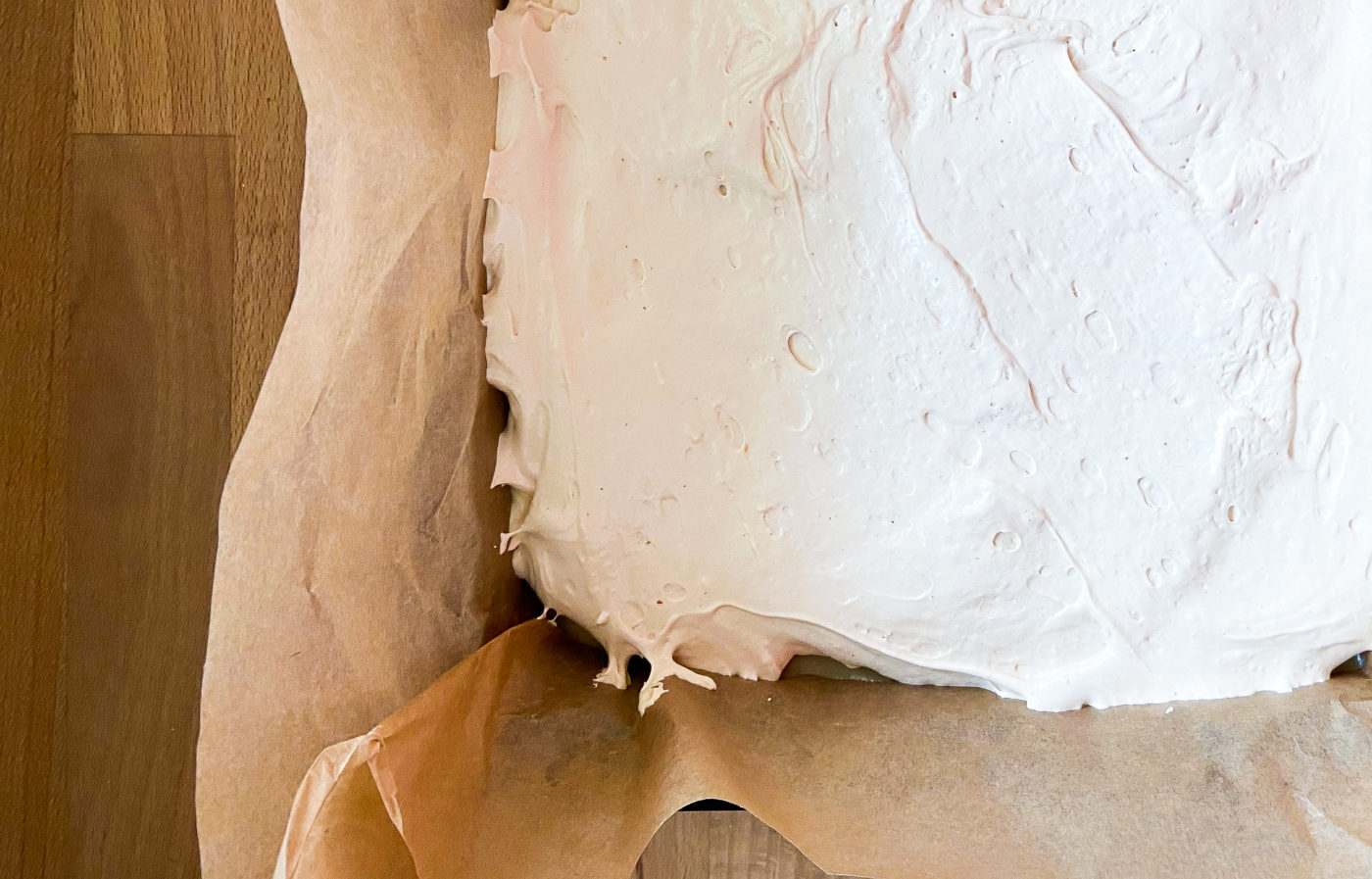 Once your caramel and nougat layers are firm, it’s time to do the chocolate coating.

Melt the chocolate in a bowl, either over a pan of water or in the microwave. Be careful in the microwave as it can burn QUICKLY – stir it very regularly. Remove your layers from the tray and cut into Snickers shapes. These can be whatever size you like really – proper chunky or more on the Celebrations scale if you want bite sized pieces.

Get a fresh piece of greaseproof paper ready. Dunk each one in the melted chocolate, covering well, and then place on the paper to set. Once you’ve done them all you can pop them back in the fridge.

NOTE: You could freeze the bars before coating to make them easier to handle. I tried this with some of them, just to see, but I actually found it harder as the chocolate set too quickly and it was difficult to get a good coverage. So, up to you I guess. 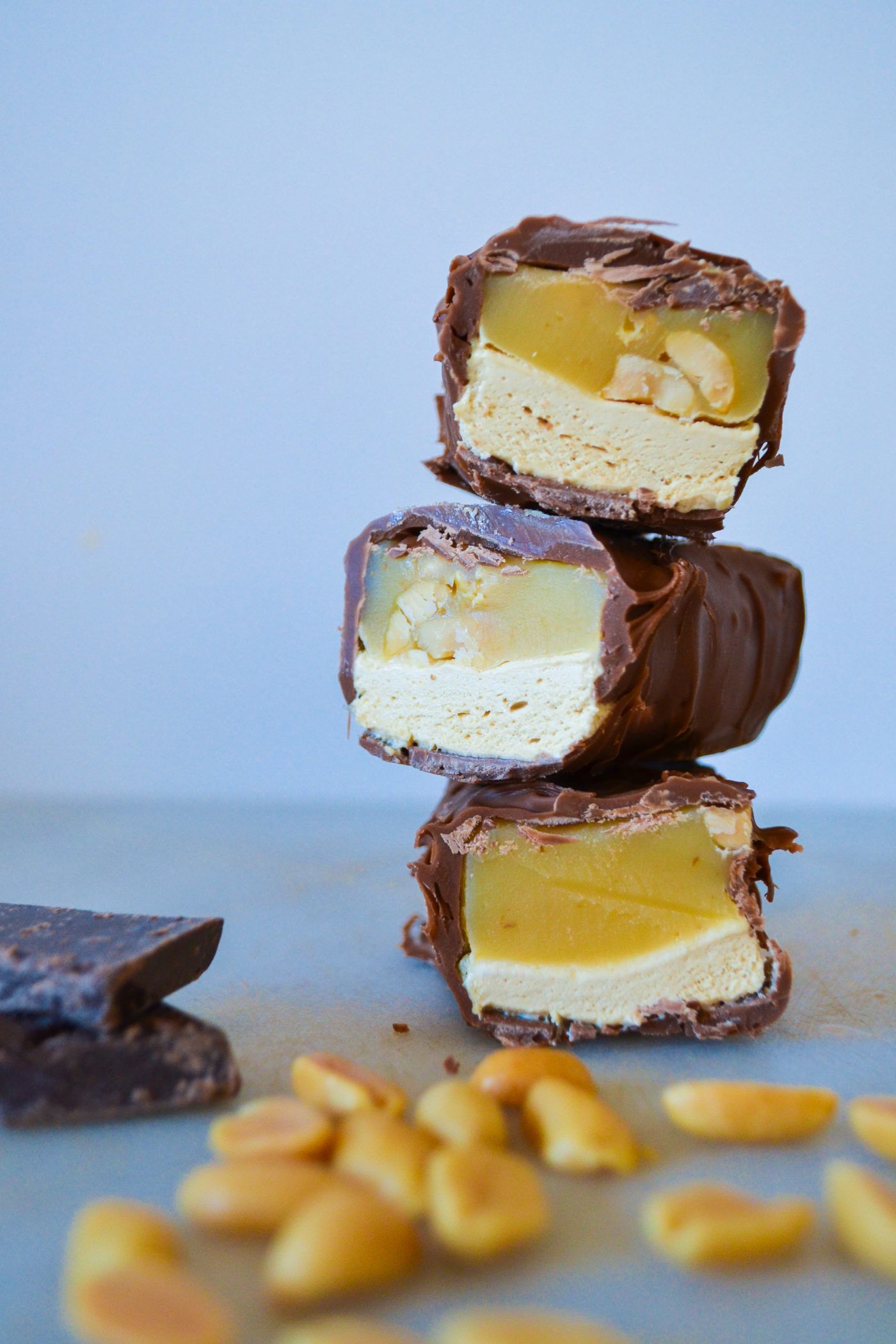 Once the chocolate is hard, transfer to a tin and keep in the fridge. (I don’t know if you have to do this, bit it seems sensible.) We had ours for over a week and they stayed tasting good, although I recommend distributing them to neighbours to win valuable points for when you need your cats feeding at some point in the future.

And there you have it! A recipe for homemade Snickers bars that’s really not as hard as you think but that will wow your friends and celebrity chefs alike.

Don’t forget to catch up on the new series of Snackmasters and see how the chefs get on making Snickers bars as good as mine. (They wish.) 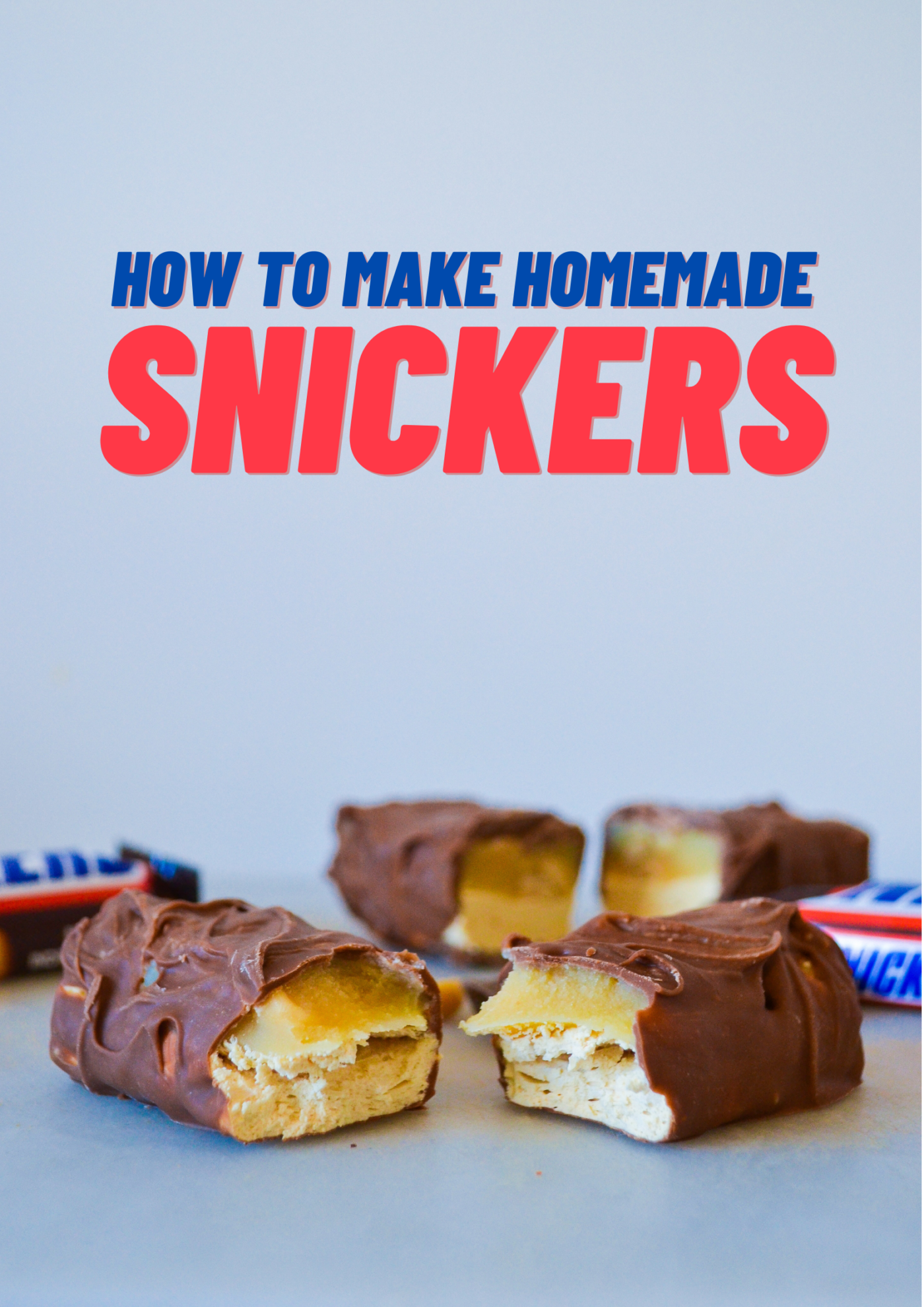