A little while ago I found myself having drinks with a friend. The subject got onto men, as it often does, and specifically my apparent lack of skill when it comes to identifying good ones.

Belle was there too, and she’s always happy to feed into a conversation about my failings, so the stage was set.

We were talking about an ex partner of mine, and I was revealing something they had done early in the relationship which, when it happened, I had chosen to ignore.

‘What the FUCK dude?’ said the friend. ‘Why didn’t you tell me that at the time?? I’d have made you leave him.’

‘Seriously,’ she said, ‘you can’t ignore things like that!’

I can’t remember what it was exactly – it may have felt insignificant at the time – but it was an excellent example of why I end up in these odd and unsatisfying relationships. It’s because I choose to ignore the relationship red flags.

I like the see the best in people, I empathise, I understand. I think to myself ‘okay so that’s not ideal, but I can totally see why their experiences as a child/low self-esteem/borderline personality disorder etc etc might make them behave like that, and so it’s really not their fault and I have to let that go.’

You absolutely do not have to let anything go, especially if it makes you feel uncomfortable or disrespected or anything like that AT ALL. People may have their own shit going on, and if you’re in a relationship and you’re supporting them through something and they are being respectful about it then sure, stick with it if you want to, but remember that you don’t ever owe anyone anything, especially not a random new partner.

To help me out, my friend decided to make me a list of relationship red flags that I should absolutely, definitely not ignore. Some are based on my previous experiences, some may be personal to me, others are more general. When she was finished, I read through the list.

‘So how many of these are they allowed to do before I get rid of them?’ I asked innocently.

She gave me a death stare.

‘It’s not a fucking pick and mix,’ she said, (or words to that effect, it was a little while ago now.) ‘It’s not multiple choice. Any one of these is a BAD SIGN.’ 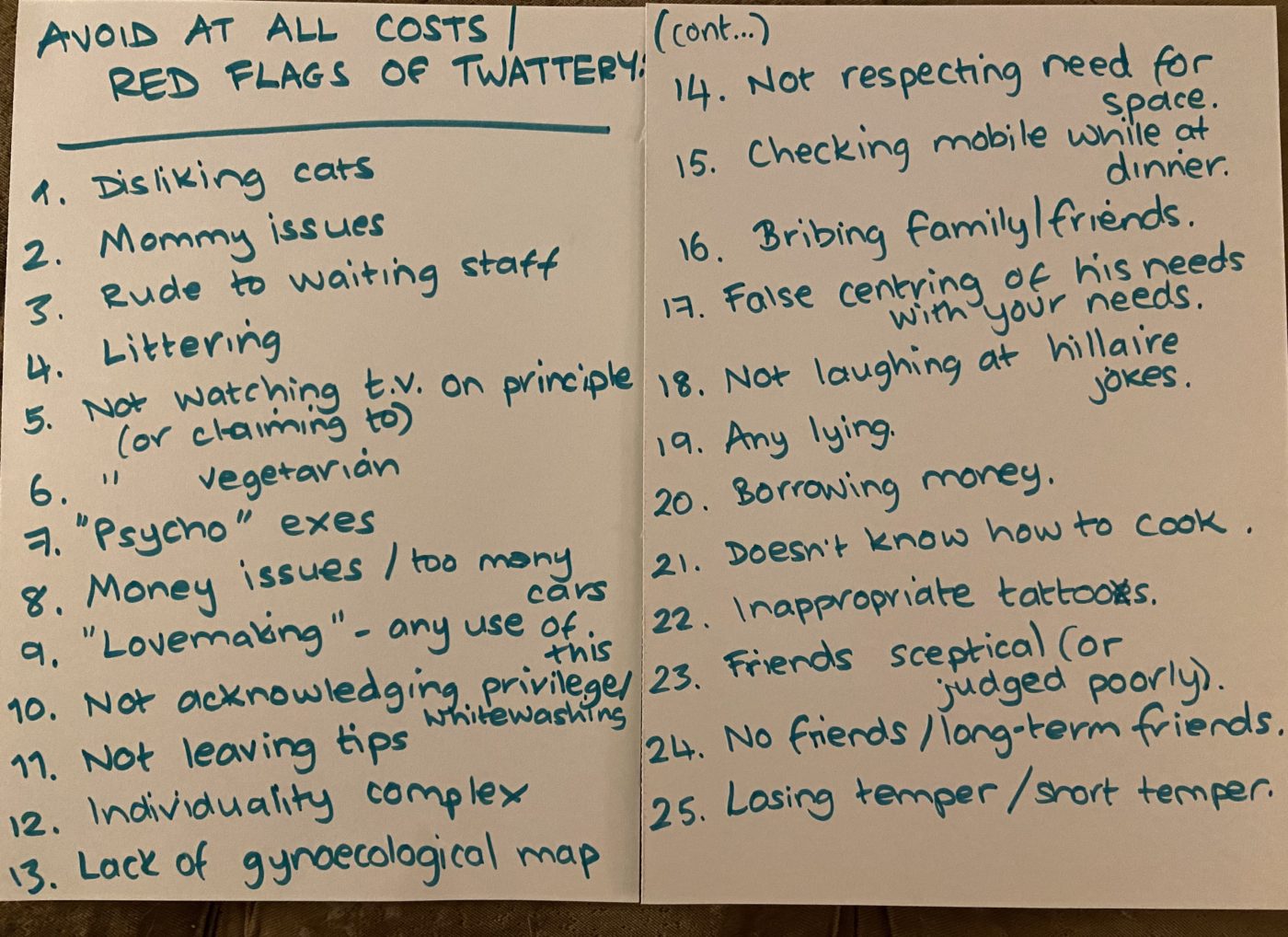 Quite a few of these are classic signs of narcissism – if your boyfriend is super charming some of the time but then is rude to people he considers ‘beneath him’, like waiting staff, then BEWARE. Not having many good or long-term friends is another one – the narcissist is very quick to fall in love or to take up with a new friend, but bores quickly. And by that I mean gets bored AND bores other people, as he will quite likely want to talk about himself a lot. He’ll drop people as quickly as he picks them up, once they stop feeding his ego.

Some may also seem a little extreme, but they are often symbolic of other behaviours, or very specific to me. I don’t need another boyfriend with a Somerset County Cricket Club tattoo.

The next day one of the cats knocked a can a coke over the list, which I thought was pretty unsupportive to be honest, but luckily I had already taken this photo so that I could have the list handy on my phone for emergencies.

The truth is that I KNOW all of these things are red flags in a relationship, I just need to stop ignoring them, to trust my instinct when something feels off and to act on it. Chances are if you’ve found this post by Googling then that’s the exact same gut feeling you have now. The very fact of Googling ‘relationship red flags’ tells you that something’s not right doesn’t it? If you want someone to validate your decision to dump your boyfriend because something feels wrong then consider yourself validated.

So those are 25 of my relationship red flags – do you agree? What would you add?