Advertisement feature in association with HERPOtherm

About a month ago I had what might possibly have been the worst cold sore that any human being has ever had.

Okay, that’s a bit of and exaggeration, but it was definitely the worst cold sore that I’ve ever had. I don’t get them that often, and didn’t get any at all until I was in my 30s, but when they strike they go all out, guns blazing.

I do what I can, smearing them liberally with cold sore cream as soon as I feel the tingle, but they laugh in my face. Literally in my face, because that’s what so horrible about cold sores isn’t it? They are RIGHT THERE. You can’t escape from them, or hide them. It’s not like when you were a teenager – you can’t wear a casual white polo neck under your school shirt like you might to hide a dodgy love bite. (Hypothetically.)

Every single time you talk to someone your cold sore wiggles about, drawing attention to itself. Mine take so long to go away too because my tongue obsesses over them, poking and prodding even though I tell it not too. They’re horrible things and anything that could help to get rid of them quicker, or even stop them appearing at all, has got to be worth a try hasn’t it?

That’s why I agreed to write a post about HERPOtherm.

Now obviously I can’t command a cold sore to appear just so that I can test HERPOtherm out myself, but what I can do is tell you how it works in theory and have a go at setting it up and using it myself, just to see what it feels like. What I then promise to do is use it when I get my next cold sore, and then come back and write a bit more about what happened.

(Keep reading for an update on what happened when I did get a cold sore!)

HERPOtherm works through concentrated heat, killing the virus beneath the skin before it emerges into a blister. It’s something to do with the secretion of histamine and the degradation of enzymes, but if you’re interested in the science you can read more here.

HERPOtherm’s thermotherapy can stop the cold sore blister developing at all if you apply it early enough or, if you apply it later, once the blister has formed, it may reduce the severity of the symptoms, or they may fade sooner. (Here’s a study about it.)

It doesn’t contain any chemicals, so it can be used on children, allergy sufferers and pregnant women, and it means you don’t have to go anywhere with a patch or suspicious looking smear of cream on your mouth.

It also means it doesn’t go off, which is a big plus for me. Because I get cold sores infrequently I end up buying a new tube of cream every time I get one, and that’s extra cost, extra waste AND the faff of going all the way to Wilko, only to find out their own brand cream is sold out and I have to buy exactly the same thing in branded packaging for FIVE TIMES the price. (As you know from my earlier rant, I get mad about branded medications)

Investing in HERPOtherm means you’re ready to go every time, no ongoing costs or hassle, and if you’re buying it for the first time in an emergency at least you can Amazon Prime it for the next day.

Is HERPOtherm easy to use?

Even though I don’t currently have a cold sore to treat, I thought I should at least have a go and see how HERPOtherm works and feels. It comes with a battery included and installed, which is great, and with the cap on it looks a bit like a lipstick, so you could easily carry it around with you discreetly. 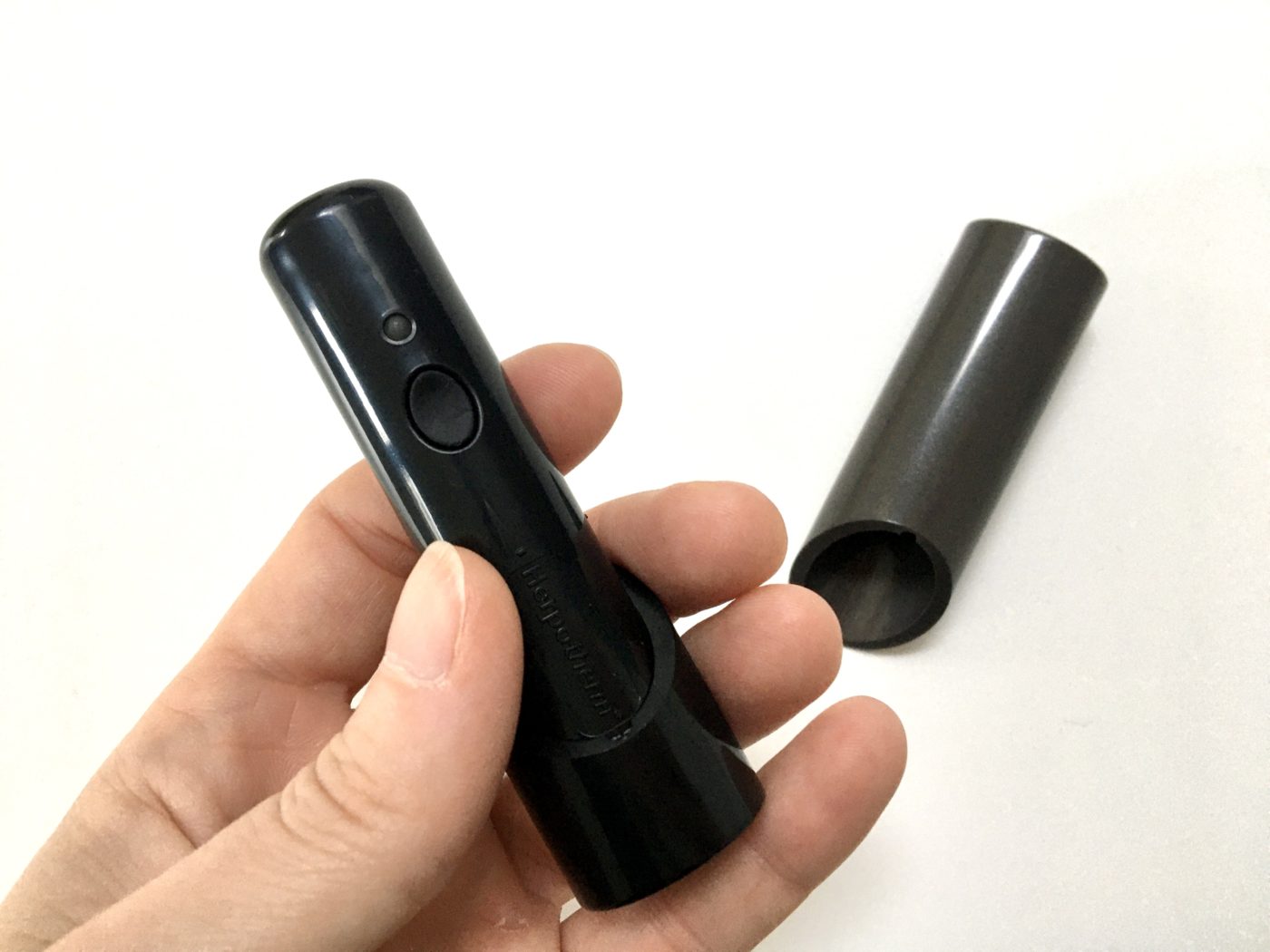 Take the lid off and you’ll see a small ceramic plate on the end, a button and an LED. Place the ceramic plate on the affected area and press the button. HERPOtherm then heats itself to the optimum temperature of 51 degrees, which only takes a second or two, and then after three seconds switches itself off. That’s it.

Now I’m not going to lie to you here, it IS hot – hot enough that it made me flinch a bit at first and say ‘cripes that’s hot’ in my head, but not hot enough that I screamed or anything. It was over so quickly though, I barely had time to feel sorry for myself. My skin was a tiny bit red for a few minutes afterwards, but the instructions say that’s completely normal and it faded quickly. 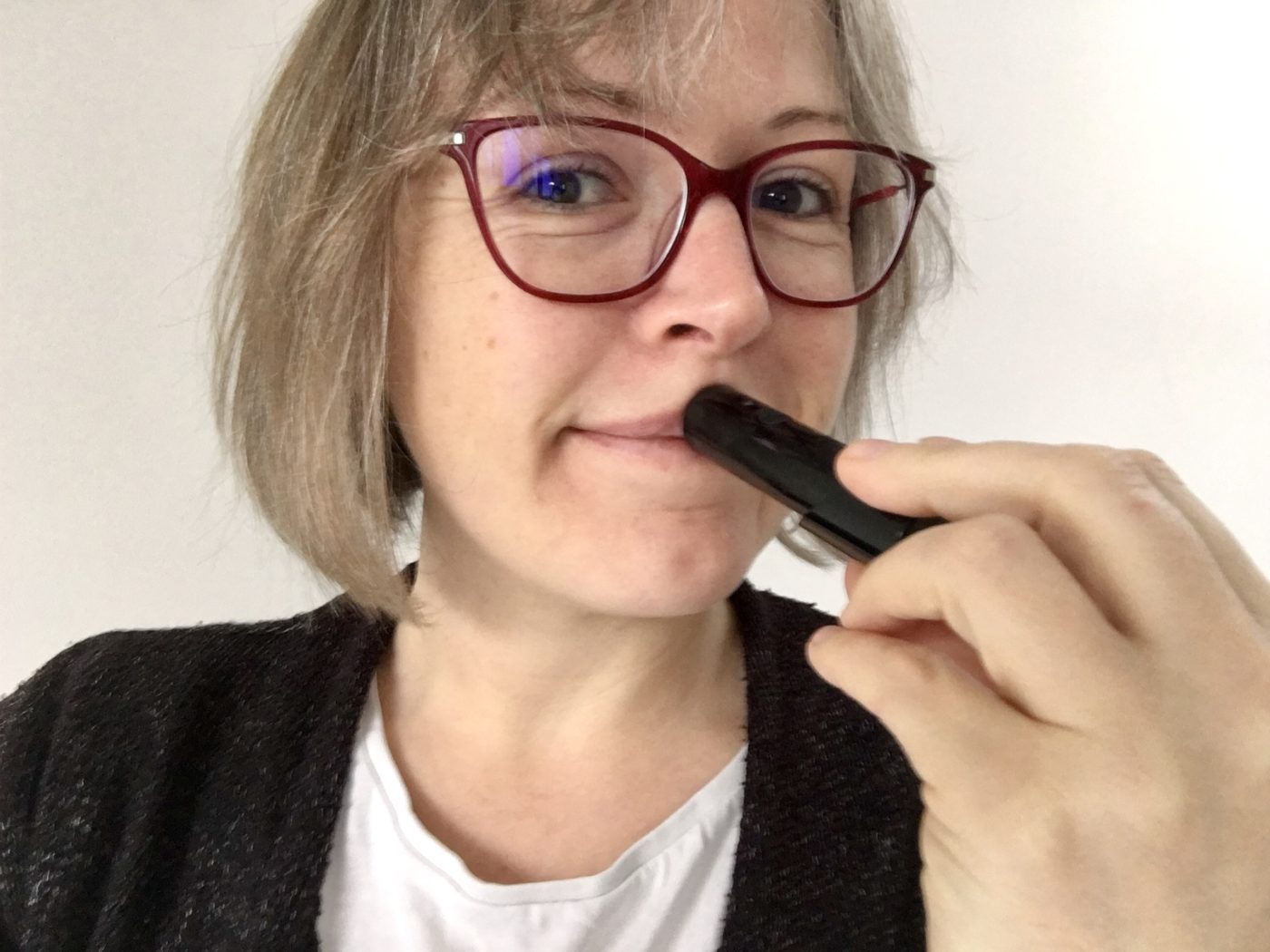 Clearly I have missed my calling as a cold sore treatment model.

Where can I buy HERPOtherm?

You can buy HERPOtherm on Amazon. It’s normally £36, but if you buy it before March 20th and tick the little box under the price that says ‘voucher’, you’ll get an extra five pounds off, meaning it only costs £31. I don’t think that’s bad at all – those teeny tiny £5 tubes of cold sore cream quickly add up.

So that’s that really, that’s HERPOtherm.

I will give it a proper road test when I next get a cold sore and update this post with my findings but in the meantime if you suffer with cold sores don’t forget the Amazon offer for five pounds off HERPOtherm runs until March 20th.

UPDATE!! A month or so after I wrote this I felt that ominous feeling in my top lip… I ran to the cupboard under the stairs and rummaged in the medicine box for HERPOtherm. I zapped it three times over the space of about an hour and lo and behold, NO COLD SORE! That was honestly it – what felt like it was going to be a huge eruption, just disappeared! I raved about it for days until Belle was so sick of me I stopped talking about it. 10/10 would recommend HERPOtherm.