We are in Ireland this week, partly for a gig that Belle went to last night and partly for Halloween. We were over for Halloween last year and discovered that Ireland goes in for Halloween in a big way. When we went over to friends of my sister’s for trick or treating we found an estate positively FESTOONED in spooky garlands, fake cobwebs and garish pumpkin themed decorations.

Inside the house was even more spooky. Rather than an unenthusiastic clump of parents sulking in the corner while the kids went door to door threatening the neighbours and gathering Halloween themed Haribo there was a full on party – every adult seemed to be wearing an intricate, well thought out costume and the whole matter was taken very seriously. One dad was even dressed up as Banksy’s shredded painting.

Fine. I’m okay with that.

What I’m not okay with is the trend for all women’s Halloween costumes to essentially be that of ‘sexy prostitute’.

You can’t apparently just be a pirate, you have to be a ‘sexy pirate’ tottering about on deck in high heels, a mini skirt and suspenders, which is hardly practical is it? Fancy dressing up as a mummy? Nope, no full length bandages for you – you can be a ‘sexy mummy’ though if you like, which is probably just a scrap or two of sheet strategically draped so as not to be completely illegal. ‘Sexy school girl’ always feels like the most disturbing, especially for children’s parties.

My absolute favourite in the shop we went in today was this one: 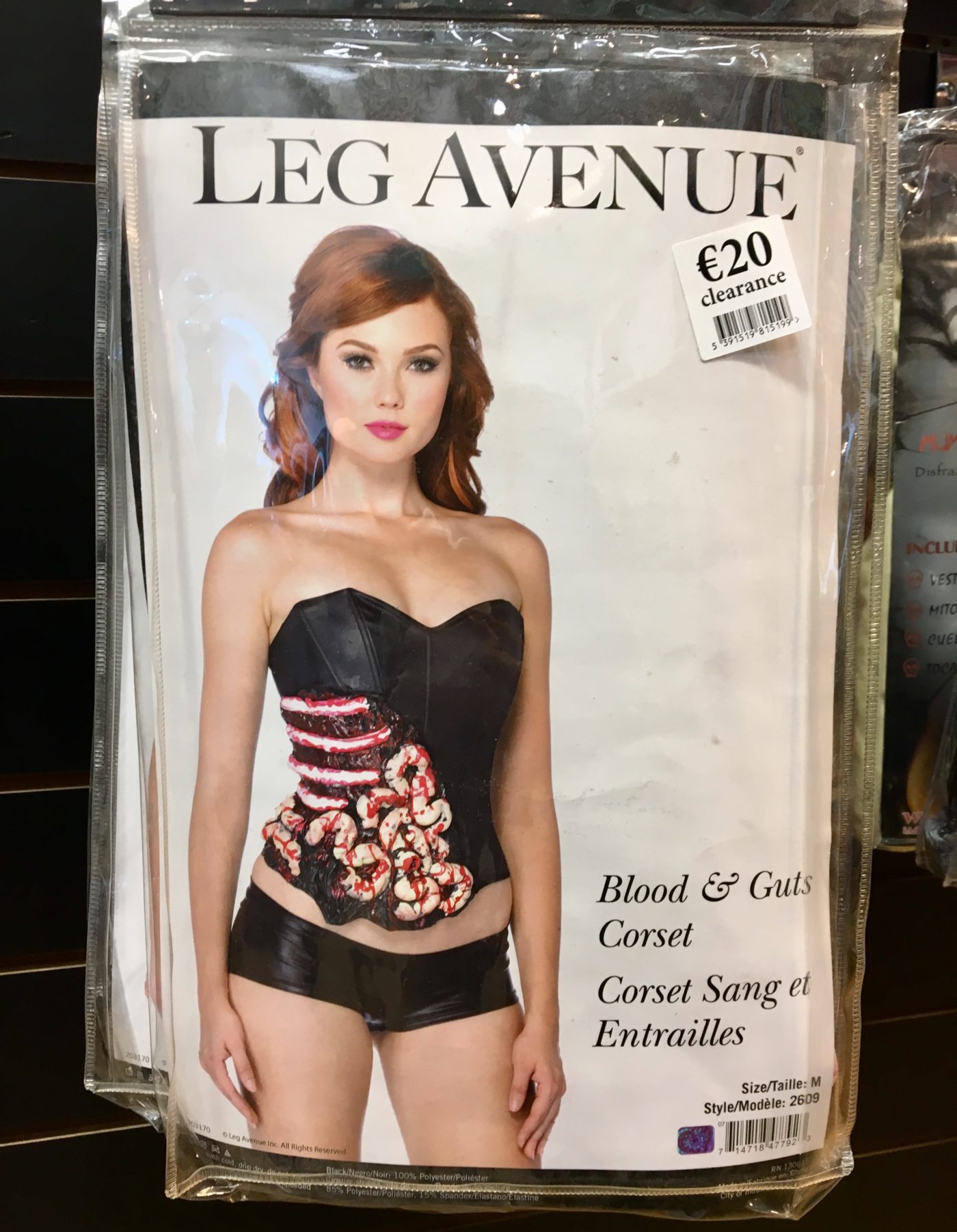 She really couldn’t be wearing much LESS than this without the risk of arrest could she?

In the interests of gender equality I went and had a look in the men’s Halloween costume section and there was nothing that came even close to this, nothing that in any way felt sexualised, or exposed more than a completely normal amount of flesh.

Most of them were suit based, several were onesies and there was even one that was a body in a coroner’s bag where you could literally only see the person’s face and hands.

There was definitely nothing involving hot pants.

It’s so frustrating that in a society that ‘s apparently so woke, so aware of the over-sexualisation of women’s bodies and the impact that this has on how women and young girls feel about themselves, and how men treat them, that we are still being sold the sexy pirate. We’ve scraped anything that could hint at cultural misappropriation, have gender neutral toilets, (I saw one at the gig last night), but the blood and guts corset is apparently fine?

Not only are we focusing completely on the flesh, we’re also disempowering women in a practical sense – sexy pirate is never going to be able to successfully master a career at sea if her heels keep getting caught in the floorboards is she?

Is this just me or does it feel like Halloween, (and fancy dress in general), is stuck in the age of Benny Hill?