It’s ten years this summer since I quite working full time and became self-employed. I’d like to say it was a carefully thought out plan, that I had savings and relevant experience built up, but honestly I was just in a job I hated and sick of working for other people.

I was also watching a lot of Sex And The City.

I’d always enjoyed writing, and there was something about Carrie Bradshaw’s freelance writer life that was just so seductive – she barely ever seemed to do any work and yet she lived in central Manhattan, was always in fancy bars drinking cocktails, and she thought nothing of blowing hundreds of dollars on pairs of shoes that I wouldn’t even be able to walk in, let alone strut around a busy city in.

I know that her apartment was meant to be rent controlled, but even so, I felt like if she could do it then surely I could?

It turned out of course that freelance journalism isn’t quite as lucrative as it’s portrayed by Carrie, and lo and behold I still don’t own a single pair of Manolo Blahniks, but I’m still grateful to her for giving me the confidence to pursue the dream, even if it was a little misplaced.

The reality is that most of the famous characters you see in TV and films would never be able to afford to live the lives they are portrayed as having. But then where would be the fun in watching a show about someone who stayed in every night eating Pasta n Sauce and watching old DVD reruns of Peep Show?

If you’re interested, and have ten minutes to kill, Canstar have put together a fun game to see which from a line up of 24 famous characters would actually be able to afford their homes, and which you really shouldn’t use as a justification for giving up a well paid job on a whim. (Me.)

You can also see how you stack up. Spoiler alert: I don’t earn enough money to buy Tony Stark’s house in Iron Man, or 221b Baker Street, but I COULD stretch to Kevin Webster’s house on Coronation Street. Sad times.

Play the game now, see which characters are living a lie, and see how you compare. 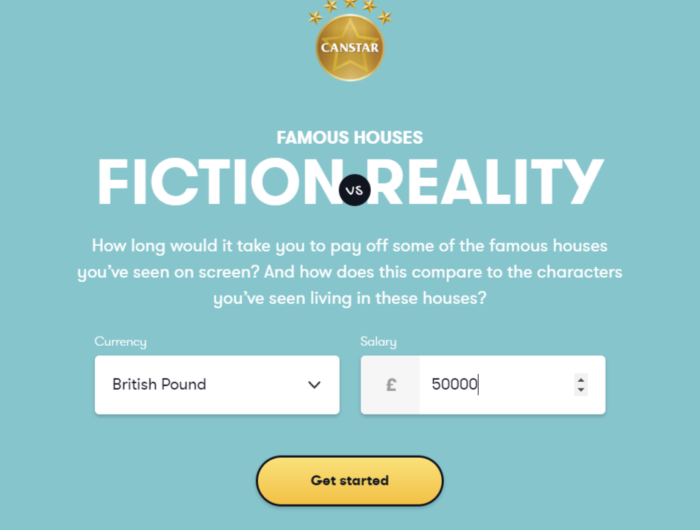