In case you’re thinking ‘low alcohol wine – what even IS that and also WHY?’ then stay with me for a second.

I like a glass of wine as much as the next 40 year old single parent who sometimes wonders about the practicalities of dying alone in a house full of cats, but I don’t always get the opportunity to have a drink whenever I want. Belle hasn’t learnt to drive yet – roll on August – and because I’m the only grown up, anytime we go anywhere it means I’m in charge of the car.

I’ve also heard that there are people who actually just don’t ENJOY drinking all the time. It seems unlikely, but apparently it’s true.

Seriously though, I am joking (a bit) because the older I get, the less I seem to be able to tolerate alcohol. What I DO like though is the whole ritual of opening a bottle and pouring a glass of something. Chinking glasses with a friend in a sunny garden, feeling your shoulders drop that little bit. All of that is just NICE isn’t it?

Alcohol free wines though, or drinks claiming to be alternatives, are often a bit disappointing. I’ve tried drinks called things like ‘Chardonnay without the hangover’ and they are really NOT. Some alcohol free beers are okay, others taste like week old sandwiches.

I was interested then to give the new Black Tower Deliciously Light range a try. 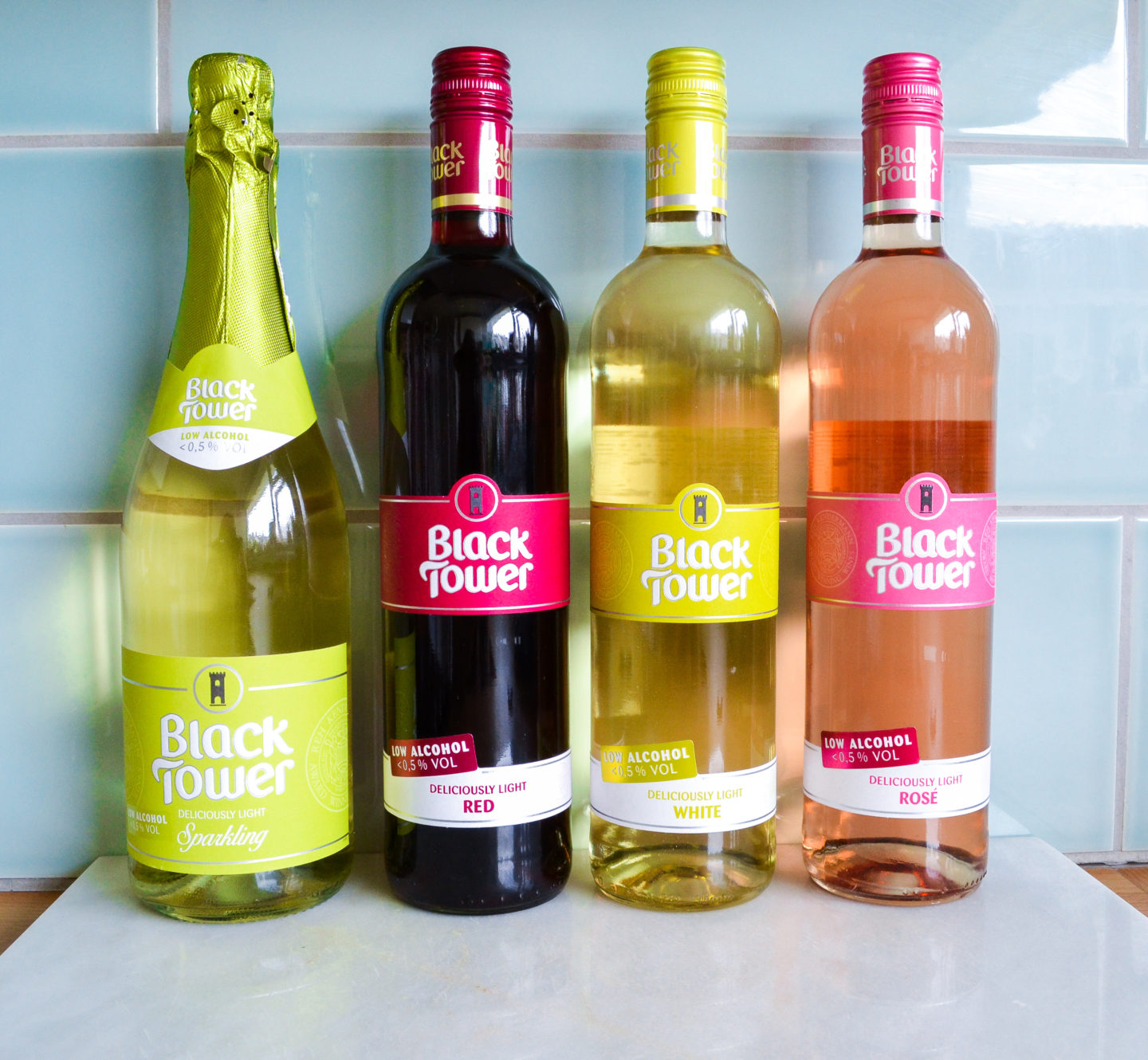 Now I appreciate that it may be a while since you found yourself with a bottle of Black Tower, but hear me out, because there are two very appealing things going on with Black Tower Deliciously Light, aside from the fact that it’s only 0.5% ABV.

Firstly, it’s low in calories. This is a bit of an issue normally with fancy alcohol free drinks as they tend to be very high in sugar, and leave you feeling a bit like you wish you’d just has a glass of water and a Crunchie.

The Black Tower Deliciously Light range is only 29 calories for a 125ml glass though – roughly 70 calories fewer than a standard glass of wine. For anyone doing Slimming World – that’s just 1.5 SYNS.

Secondly, it actually tastes nice. This mind sound like an obvious thing to say, because I wouldn’t be talking about it if I thought it was rank, but I’m not going to pretend I wasn’t sceptical at least. We took a bottle of the Deliciously Light Sparkling to some friends for an Easter Egg hunt, and after some initial eyebrow raising, possibly just because of the low alcohol content, there were a lot of mutterings of ‘it’s really quite tasty!’ and ‘oh this is actually quite nice!’

(WARNING: Make sure you are pointing the bottle away from people when you start to open it. Our cork was rather on the feisty side, which added to the festivities but left a small dent in the ceiling.) 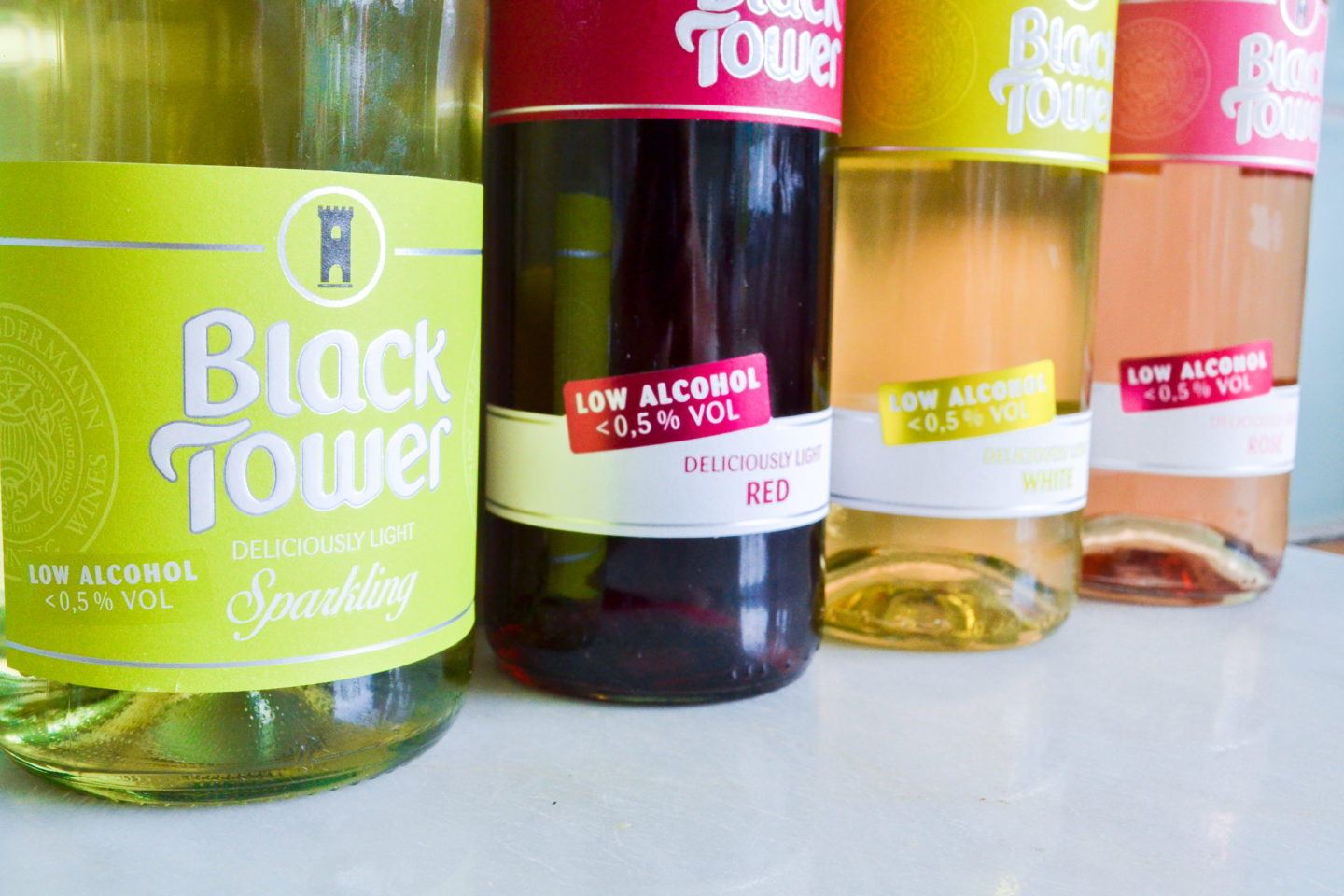 We did experiment too with adding things to it, like peach syrup, and all agreed that the sparkling would make an excellent base for mocktails. The Deliciously Light range is created using real wine and a gentle process that extracts the alcohol, so it has a fruity sweetness about it, but without losing the edge of wine. The sparkling would be brilliant for fake bellinis and things like that.

I really enjoyed the red with some ice in the garden over the sunny bank holiday weekend – I’ve heard chilled red wine is a THING is some hot countries – and as I type this I have the rose version in a bag, ready to take to my mum’s for lunch as, surprise surprise, I’ll be driving home again. 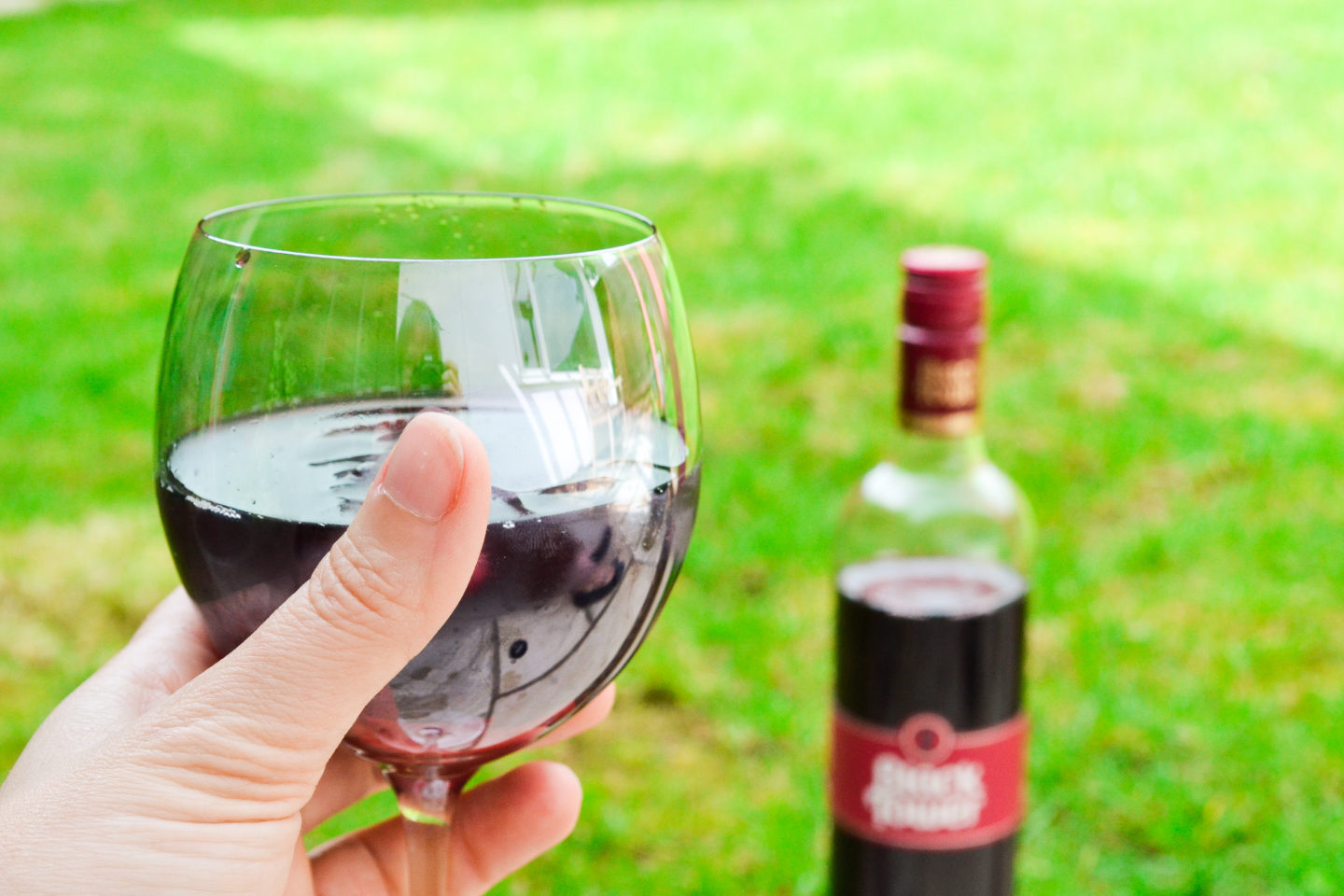 As well as launching the Deliciously Light range, Black Tower is sponsoring Tough Mudder this summer, a muddy obstacle course that I’ve been lead to believe is great fun, especially if you take part with a big group of friends. The Deliciously Light range would be perfect for a Tough Mudder prep meeting the night before because you wouldn’t have to go over a scramble net with a hangover. No one wants that.

To celebrate the new drinks, Black Tower is offering one of my readers a lovely prize. Hoorah!

If you fancy giving the Black Tower Deliciously Light range a try, and rounding up a group of friends for a fun, active day out, then there COULD NOT BE a better prize combination for you!

To be in with a chance to win a case of Black Tower Deliciously Light and Tough Mudder tickets for you and five friends, leave a comment on this post telling me what your tipple of choice is when you’re the designated driver, and which from the Black Tower range you’d most like to try.

Register your comment in the widget below and then complete as many of the other entries as you can, to give yourself as much chance as possible of winning the prize. The competition will close at 11.59pm on May 12th 2019 and full T&Cs apply.