I have a love hate relationship with Tinder.

A lot of the time I don’t use it at all, because of all the skydive pictures, and then other times I have vulnerable moments like this where I worry briefly that I might die alone, surrounded by cats, and Tinder is my only way out: 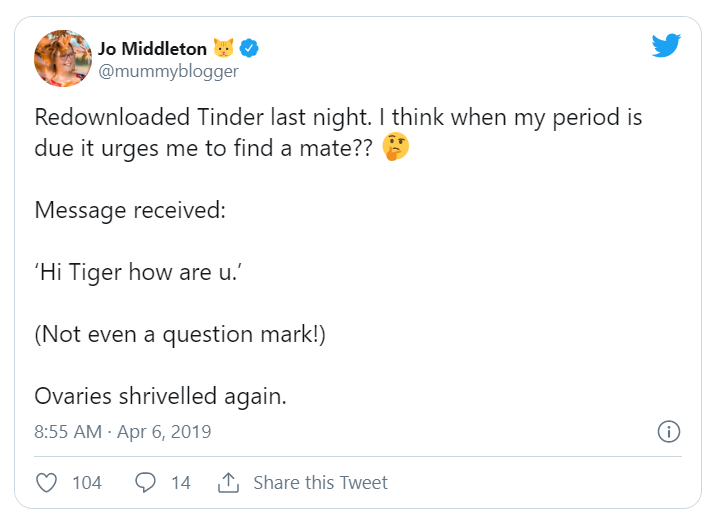 While I’ve never had any truly horrible dating experiences on Tinder, I’ve also never had any amazing ones. I’ve had a LOT of perfectly pleasant first dates, but very rarely a second one. I was fiendishly seduced by one man who played a game where he pretended to interview me for Desert Island Discs, only to say ‘by the way I should probably tell you I’m not looking for a relationship’,* but most of the time it’s just me swiping left past endless pictures of men who look so sad that you wonder if they have set up a Tinder profile as an alternative to suicide.

I have been doing a bit of swiping lately, to pass the time, and have become increasingly aware of just how similar everyone is in terms of the frankly bizarre pictures they post and the tedious things they say in their profiles. It astounds me that a grown man can decide he wants to impress a woman, and think that a selfie in the mirror of a public toilet, complete with background urinal, is going to be the money shot.

‘When she’s sees this she’s going to be putty in my hands,’ he thinks to himself, content with the fact that you can’t really see his face but CAN see a large toilet cistern.

And the fish! So many fish!

To make the process of finding a match on Tinder slightly less hideous, I have made you a Tinder bingo. It should help to pass the time at least – a distraction from the thought the only men left in the world are permanently sat astride motorbikes, wearing helmets. Why not share it with your single friends, or invite people round for dinner and play competitively? Perhaps do shots every time you complete a row? The toilet selfies might seem more appealing by the time you’ve completed your card.

I would also be interested in particularly on brand screenshots. 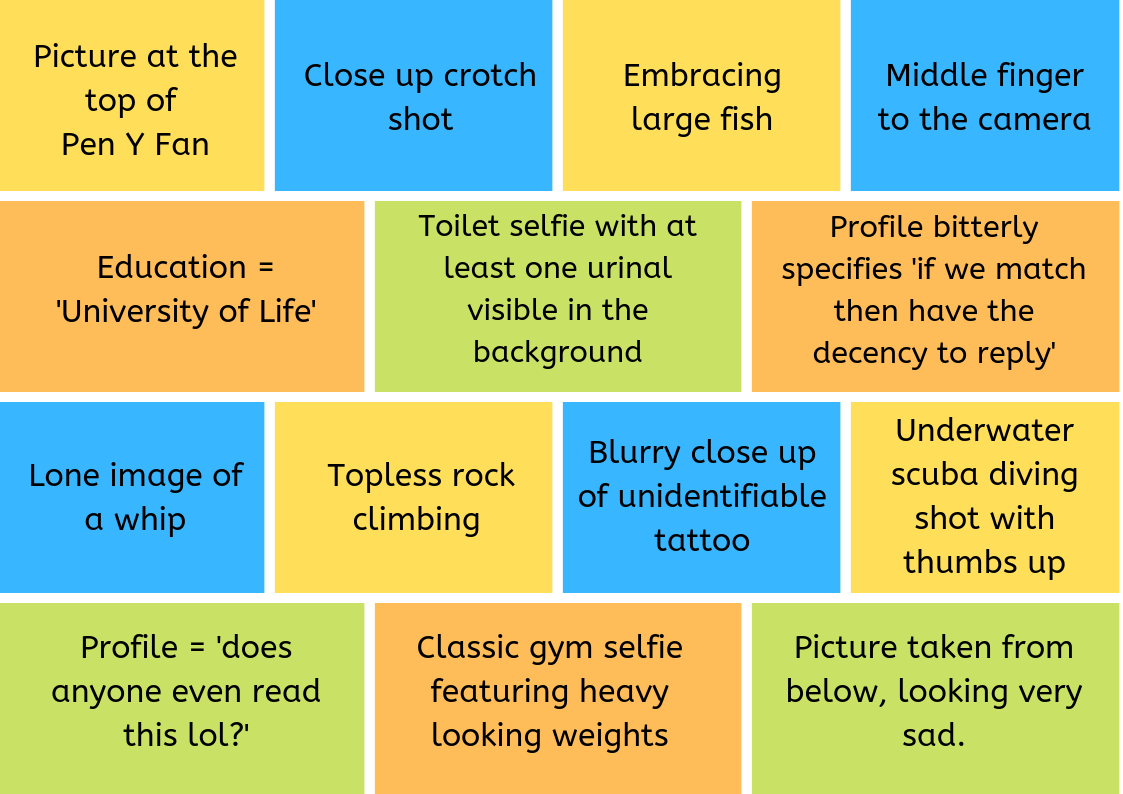 And yes, I know this is cynical and bitchy and all these men are PEOPLE blah blah blah, but come on guys, make an effort.

Are you a Tinder user? What would you petition to have added to the bingo card? Perhaps you’re a man and are sick of women hiding behind Snapchat filters?

*I mention him because we are still friends and it might make him feel important.